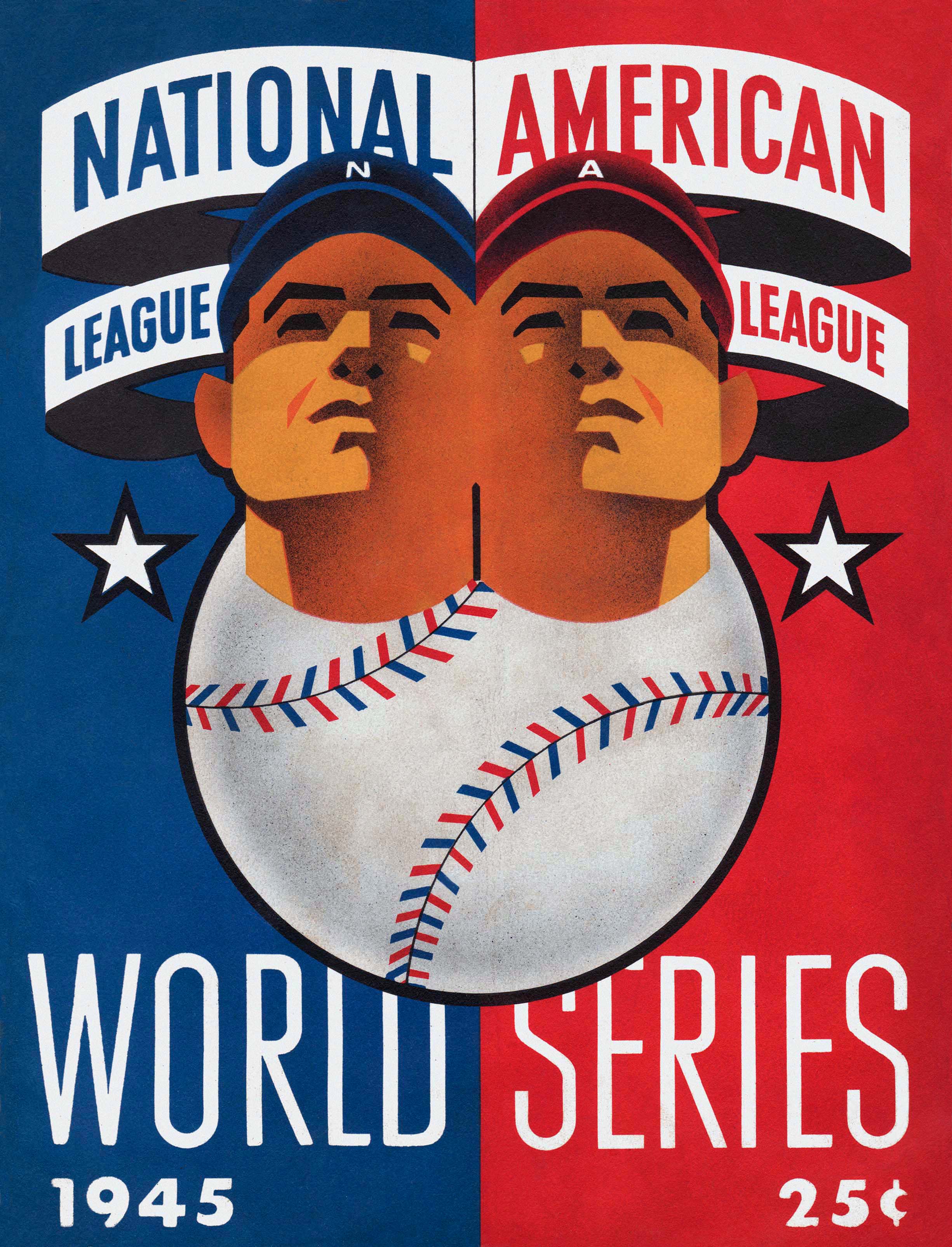 The second world war ended in the middle of the baseball season, but it was too late for the inducted players to return to their jobs in that year.

It was no coincidence that their decline coincided with the departure of slugger Hank Greenberg, the first Major League player to be inducted into the armed forces. Detroit rebounded in 1944 to battle St. Louis down to the last day before the Browns captured the only pennant in their history.

The Cubs made the World Series in 1938, but the four-game sweep by the Yankees seemed to propel Chicago into a downward spiral. They finished no better than 4th the next six years before finding the right combination in 1945.The Cubs won their final five games of the season, all on the road, to end St. Louis’s streak of three straight pennants.

BY EDWARD BURNS
Pittsburgh, Pa., Sept. 29—The Chicago Cubs this afternoon became champions of the National League for the 16th time, the fifth time in 17 years, the third time under Charley Grimm’s leadership, and the first time since 1938.

They won the pennant by beating the Pirates, 4 to 3, in the ninth inning of the first game of a double header. They triumphed the hard way after scorning the cooperation of the weatherman, who wanted ti get into the act by clinching the pennant for the Chicagoans by raining out the day’s program.

The Cubs, by the way of practicing for the Detroit Tigers or the Washington Senators in the world series beginning next Wednesday, also won the superfluous seven inning game, 5 to 0. 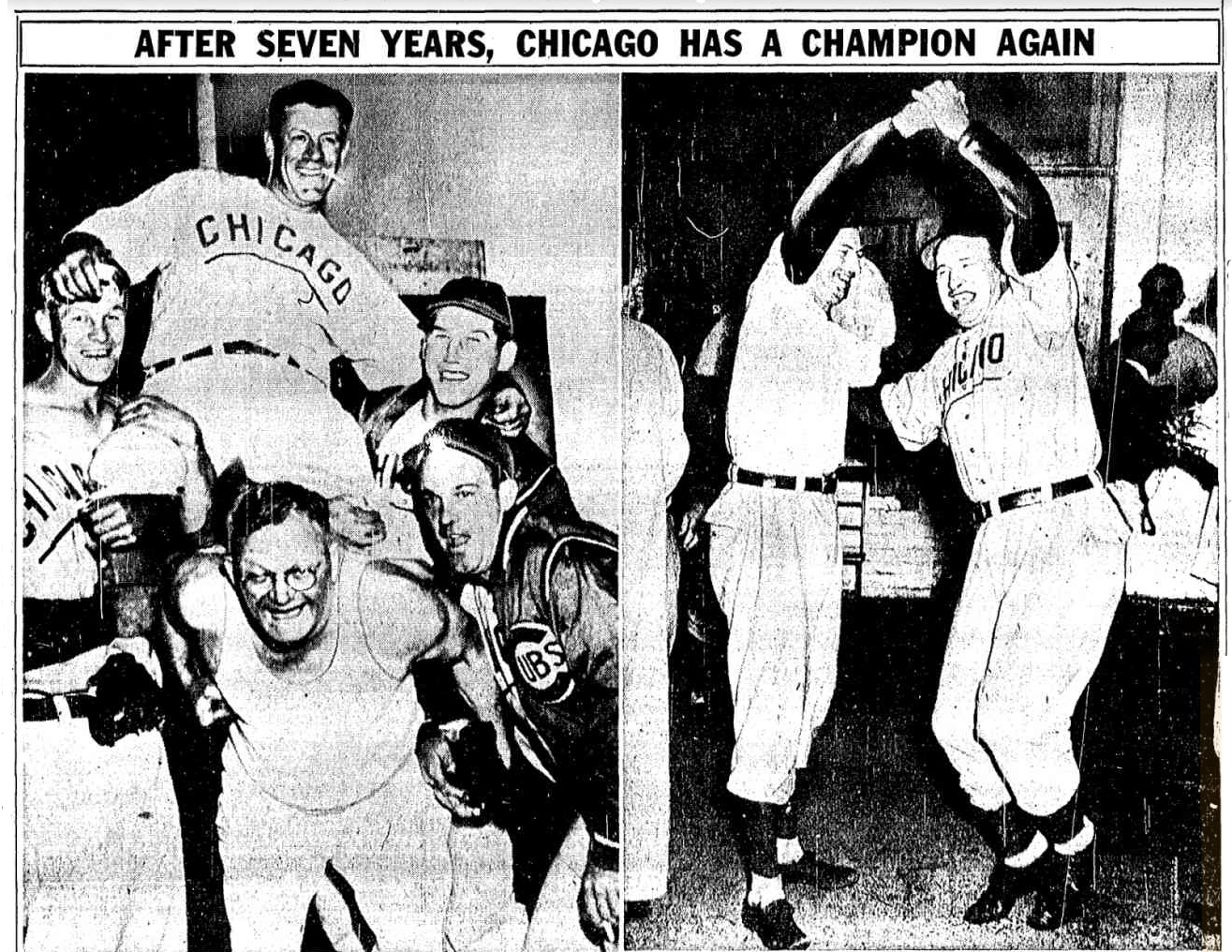 LEFT: The happiest man in Pittsburgh last night was Manager Charley Grimm of the Cubs. Here he is, after his men had clinched Chicago’s first league pennant in seven years by defeating the Pirates, 4 to 3. Trainer Andy Lotshaw is Grimm’s chief support in this clubhouse tableau. The others are Paul Erickson (left) and Frank Secory (right) and Len Rice (front) on the right.

RIGHT: Stanley Hack (left) and Coach Roy Johnson go into an impromptu dance of joy as they realize they are sure of a fat slice of the world series melon. The Cubs will meet the American league champions for the world title starting Wednesday, probably in Detroit. The Chicago portion of the series will open in Wrigley field Saturday. 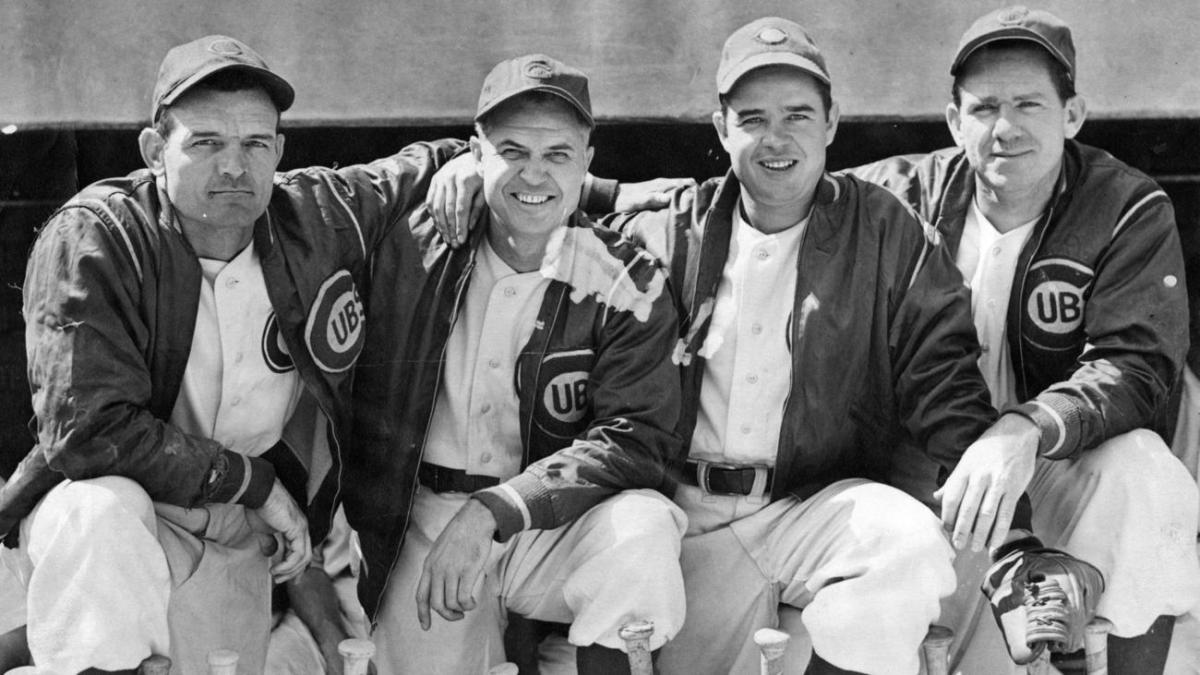 Claude Passeau, from left Ray Prim, Hank Wyse, and Paul Derringer were part of the pitching staff that helped the Cubs to the World Series.

Finish Season Today.
They will hold another similar workout with the Pirates tomorrow afternoon in the season windup, while watching the scoreboard to see whether they are to set out for Detroit tomorrow night via Chicago or linger here pending an American league playoff. Arrangements have been made for the Cubs, however, to arrive in Chicago at 7:40 o’clock Monday morning, then leave for Detroit that afternoon.

The pennant clinching with the Cubs’ 95th victory marked the climax of first place tenancy, which the Cubs took over in Philadelphia on July 8 and continued without a break tho the margin over second place fluctuated from a peak of 7½ games to 1½ games. On May 18, after losing four straight to the then pace setting New York Giants, the Cubs were nine games out of first place, stuck with a six game losing streak. On their second eastern trip they won their last 10 games to take the lead, and added their 11th on returning home for their biggest winning streak of the season.

Hank Borowy was the winning pitcher in today’s clincher, his 11th success in 13 decisions as a Cub and his 21st in major league competition, he having come to the Cubs late in July after winning 10 and losing 5 for the Yankees.

Hank retired with one out in the home ninth after Al Gionfriddo had doubled and Jack Barrett had walked. The slim right hander started to rest for the world series opener, which will be against a team he has beaten twice this season without losing, whether it’s to be the Tigers or the Senators. In his career, by the way, Hank has beaten the Tigers 11 out of 14, the Senators 7 out of 10.

The Cubs’ Biggest Inning!
But the Cubs half of the ninth was important, too, with the one run which was bigger than all others they had scored in the long struggle to the title. Stan Hack, first up, was walked by Fritz Ostermueller. Ron Hughes singled sharply to right and the rummers moved up on Harry Lowrey’s sacrifice. Phil Cavarretta was given an intentional pass, the Pirates hoping to set up a double play situation to get them out of trouble.

With Andy Pafko at bat, the left handed Ostermueller was withdrawn, Nick Strincevich, a right hander, coming in to pitch to Andy.He sent a fly deep to Johnny Barrett, HAnk bringing home the pennant run. 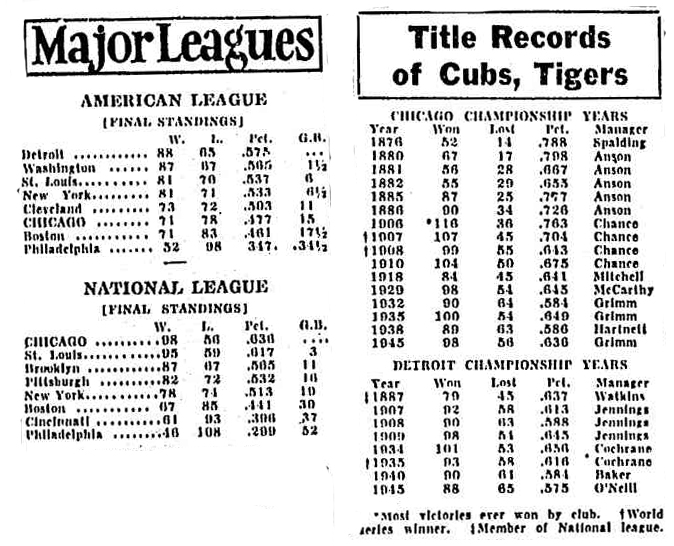 The world series, the baseball magnates’ annual glamour show and, incidentally, an affair in which financial loot falls to some of the ball players, will get under way tomorrow afternoon. From what is definitely known about the principals anything might happen before one or the other nails down the title with the required fourth victory.

The contestants are Detroit’s Tigers, American league champions after a tough struggle, and Chicago’s Cubs, who emerged as National league victors after an equally strenuous summer.

Both were long term residents of first place, the Cubs since July 8 and the Tigers since July 11, but neither could dominate its own league. Largely because of this there is no reason to believe either can strongly overshadow the other.

It Rains on the Tigers.
Dark clouds were swirling overhead today and there was some rainfall, especially hen the Tigers were taking a last preliminary workout. But the weather developments failed to cause either Charly Grimm, the Cub boss, or Steve O’Neill of the Tigers, to give any thought to possible alterations of pitching plans for the opener.

It still is the 25 game winning Hal (Lefty) Newhouser for the home folks and Hank Borowy, the American league refugee, for the Cubs. Not a little of the backing built up behind the Cubs is due to the influence wielded over the Tigers by Borowy when he was with the Yankees.

Grimm’s pitching program beyond tomorrow is questionable. O’Neill claims he has a fair idea of how he is going to proceed regardless of what happens to Newhouser before the 54,000 spectators. Grimm is going to wait a while before naming his second game nominee. O’Neill says it will either be Virgil Trucks, recently discharged from the navy, or Frank (Stubby) Overnire, who is left-handed and frequently pretty tough.

Webb at Short for Tigers.
Along with other last minute developments the managers let it be known they would go into the series with the lineups in use at the end of the season. Skeeter Webb, former White Sox, who supplanted Joe Hoover at short during the last 10 days of Tigers’ stagger toward the flag, will remain there. In the same spot for the Cubs will be Roy Hughes.

Hughes, who recently relieved Len Merullo at short and then moved to second when Don Johnson was hurt, will be back at short because there is no longer need of his utility services at the other side of the middle bag. Johnson, an important defensive item on the Cubs’ infield, has recovered from a neck injury suffered last week in Cincinnati. Johnson means a lot to the Cub cause because of his double play skiull.

Its According to Viewpoint.
The few who have been willing to decide the winner in advance reached their conclusions by different approaches. Chicago devotees claim the Cubs beat out the Cardinals even tho they themselves couldn’t beat the Cardinals, conceded to be the best of the war time teams. On the other hand, the Tigers’ henchmen point out that their team didn’t win the flag by swamping the weak teams as in the case of the Cubs.

The only series lost during the year by the Tigers were to the seventh place Boston Red Sox and the Senators, who were contenders up to the last day of the race. Each beat the new champions, 12 games to 10. The Tigers tied the Indians in 22 games and the Indians, on the other hand, virtually made Washington pennant bid possible. The Tigers whipped St. Louis (Browns), and the Yanks 15 times each.

While the Tigers were taking their workout this morning of their admirers was Grimm. Whenever Hank Greenberg, Rudy York, or Roy Cullenbine was at the plate the Cub leader was all eyes. Finally he reached the stage where he thought he had seen too much. Cullenbine stood up at the plate for at least five minutes and drove one ball after another into or against the right field structure.

Finally the patient Grimm complained out loud, “Does that Cullenbine think he is amusing me or is he going to do all of the Tigers’ batting?”

The truth is that Cullenbine might do far more batting than is good for the Cub cause. 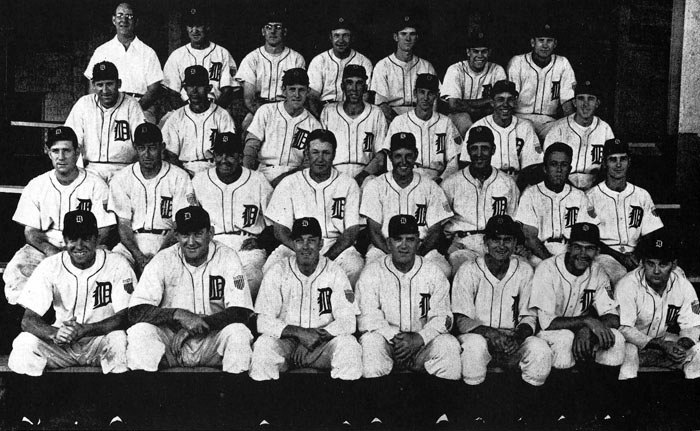 To celebrate the 70th anniversary of the Cubs/Tigers World Series, on August 14, 2015, the Detroit Tigers and the Chicago Cubs played a “throwback” game. 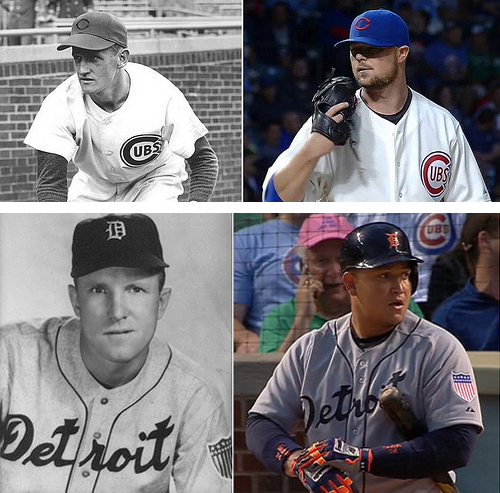 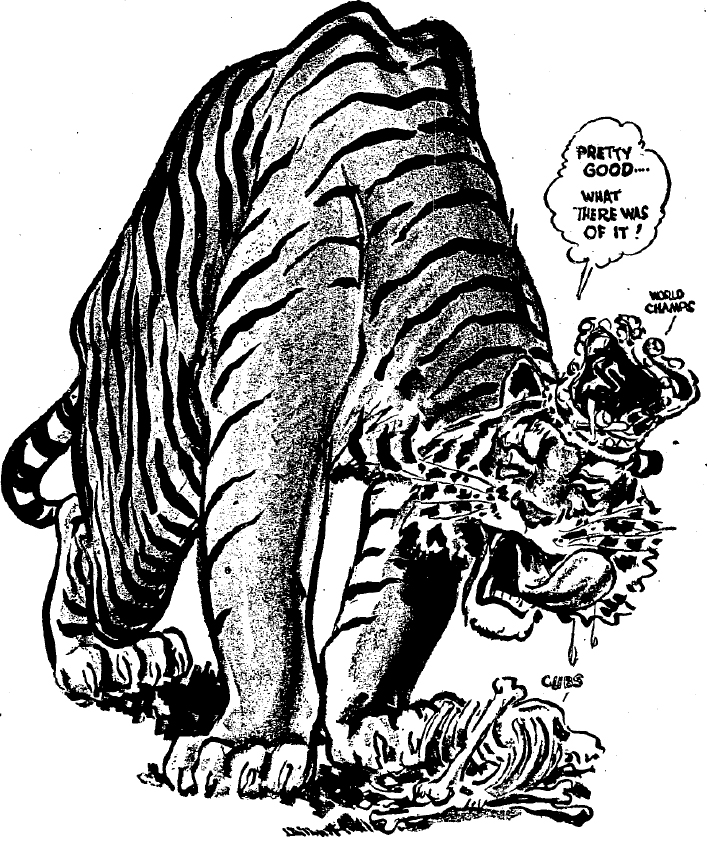