Andy Fralin employed 525 ushers and other attendants to handle tIhe capacity throng, . . . He had trouble with only one fan, Billy Sianis, owner of a tavern near Chicago Stadium, who insisted on bringing a goat into the box seat section… Sianis had a ticket for the goat, which was paraded thru the American league area of front box customers…The critter wore a blanket on which was pinned a sign reading:

We Got Detroit’s Goat 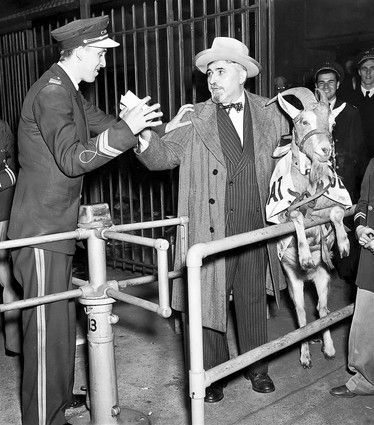 Possibly staged photo of Sianis and his goat.

Chicago Tribune
In The Wake of the News
May, 1962

THERE WAS THE rare year, said Mr. Billy Goat, when the White Sox were playing in the world series. He purchased two tickets (from Bill Veeck, who admonished:

But we’ve got the scat locations. The cops will check to see that you do not bring in your goat. The world series Is not for goats.

It was very simple, said Mr. Billy Goat, to exchange his series tickets for other locations. When Veeck finally found the goat in the park, there were some uncomplimentary words. “Veeek said I’d never get the goat in again. But I went to Aurora and paid $150 to a helicopter pilot to drop me and my goat at serond base just before the seventh game.”

Then, Mr. Billy Goat remembered back, there was the world series of 1945, which strangely found the Chicago Cubs as hosts. The Cubs issued him tickets with the warning that no goat be Billy’s guest. An attorney advised: Mr. Billy Goat that a ticket was a ticket; a contract. So Billy Goat and billy goat went to the series. After mucb screaming by women, the two goats departed. When the Cubs blew the aeries in the seventh game, Billy Goat wired the ball club: “My goat wants to know who smells now.”

Late yesterday. Mr. Billy Goat said he is certain of one thing about the Floyd Patterson-Sonny Liston fight: Billy Goat, and a goat guest, will be at ringside.

Even if we bave to pay!