BY IRVING VAUGHAN
Detroit, Mlch., Oct. 3-Charley Grimm’s Cubs, champions of the National league, turned loose batting thunder today to project themselves into the spotlight as probable world champions, an honor the Chicagoans haven’t owned since ‘way back to 1908.

With an attack that routed the Tigers, titleholders in the American league, and particularly the 24 carat Hal Newhouser, the Cubs put a punch in the world series opener by crushing their opponents. 9 to 0. before a crowd of 54,637.

And, of course, along with all those Cub hits was that whitewash job-an accomplishment of Hank Borowy, the Yankees’ midsummer S100.000 gift to Chicago. Borowy wasn’t even close to his best but he was good enough. 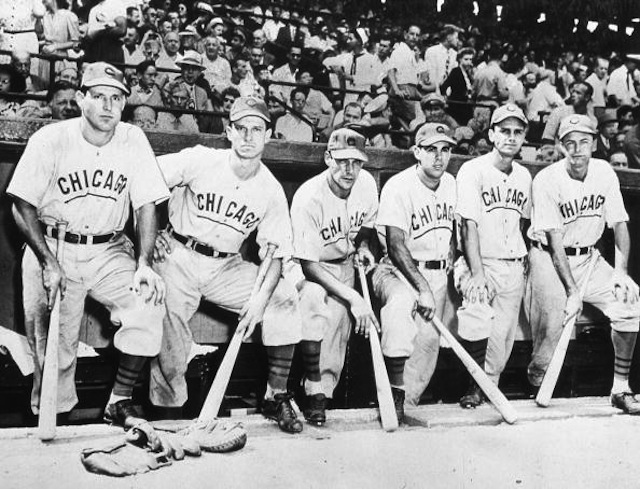 Cubs’ Bats Go Wild
All the tenseness that should be part of a world series battle disappeared soon after the first ball was pitched. Luck gave the Cubs almost free run of the premises in the first inning when four crossed the plate on hits while effective were not exactly robust. But whatever good fortune had done for them with that first inning outburst was erased by legitimate power in hile third. They slammed the competent Newhouser, winner of 25 American league games, in vicious fashion to add a batch of three runs. And later there were some more off Jim Tobin. one a homer by Capt. Phil Cavarretta.

The Cubts’ free hitting, as compared to the skimpy six safeties yielded by Borowy, was only one phase of the way in which they exhibited themselves, at least for a day, as far superior to the American leaguers. They ran the bases perfectly, except in one instance, and they did some fielding that even the Tiger partisans had to admire, the choice items in the art of defense being a lunging one handed stop by Cavarretta and a story book throw by Andy Pnfko.

Big Day for Phill and Andy
It so happened neither Cavarretta nor Pafko permitted these fielding stunts to take their minds off the value of base hits. Along with his homer, which was under the heading of unnecessary punishment, Cavarretta figured in both the first and third inning rallies with singles. He also walked once. Pafko was equally potent except for distance. He got into the first inning jamboree with a walk, doubled to aid in the three run third, and subsequently singled twice, one of these hits getting him around the bases in the seventh with the ninth run.

Borowy was so wabbly that at one point Manager Grimm came charging out of the dugout to learn first hand whether his right alinder wanted relief. During the first six innings flank not only yielded six hits, but walked five and lilt a bat- ter. In the first Inning alone four Tigers reached base, but there was a double play in between. Twice thereafter the Tigers had two on base with nobody out, the last time in the sixth inning. But thereafter nobody reached base, the Cub pitcher retiring the last 12 batters without a break.

Johnson Starts First 1ally
Stan Hack, first batter of the afternoon, furnished a hint that all was not going to be well with Newhouser. A great pickup and throw by Jimmy Outlaw robbed the veteran of a hit. Then the fun started—at least it was fun for the Cubs.

Don Johnson dribbled a hit neither Skeeter Webb nor Eddie Mayo could reach and a moment later Johnson stole second, staying there while Harry Lowrey was flying to Roger Cramer. While Cavarretta was at bat a bad pitch bounced past Paul Richards but Johnson wasn’t ready for a sprint and lost a chance to move to third at bargain rates. When Cavarretta beat out a bounder to Mayo, the Johnson lapse became important because it kept a run from scoring. The incident was quickly forgotten in view of the fashion in which Chicago gentlemen soon began to drift across the plate.

Score on Passed Ball
Newhouser’s second pitch to Pafko escaped Richards, Johnson scoring and Cavarretta going to second. This development caused the southpaw to get Pafko out of the way by issuing a deliberate pass, making way for Bill Nicholson’s entry as the big villain. Nick hoisted a fly to right center and Roy Cullenbine backed against the wall, 370 to home plate. But the ball went right on thru Cullenbine’s extended hands for a triple, Cavarretta and Pafko scoring. Then Mickey Livingston singled to center, the only genuine hit of the inning and Nick ran home with the fourth run.

Borowy’s first two pitches of the day were strikes but Webb then singled. Mayo followed with a single to center but tile situation eased up a bit when Roy Hughes captured Cramer’s well bit grounder and turned It Into a double play. The pressure went back on Borowy when he threw eight wide of the plate to walk Hank Greenberg and Cullenbine, filling the bases. But Rudy York sent up a pop foul Cavarretta grabbed.

Still Wlid iit Third
Another double play lifted Borowy out of trouble after he had walked Richards in the second inning, but he continued his wildness in the third, which opened with Cavarretta making his one handed diving stop to rob Webb of a possible double. Mayo was dispatched on strikes, whereupon Borowy walked Cramer and put Greenberg on base by nicking the peak of the slugger’s cap with an errant pitch. But this was cleared up by Cullenbine’s pop to Johnson.

The real polishing off of Newhouser in the Cubs’ half of the third began with Johnson doubling to right center, the 40 year old Cramer making a desperate but futile dive. Lowrey bunted to put Johnson on third and Cavarretta horned in with his second single, Johnson scoring

Pafko picked the wide open spaces of left center for his double, Cavarretta galloping around to the plate. Nicholson popped out, but Living. ston sent a single Into center to score Pafko and bring about New. houser s retirement. Al Benton came in and the Incident Closed with Liv. Ingston in an attempted ,

Pafko’s Throw Nips Mayo
Borowy’s fondness for keeping himself in hot water was evidenced by a pass to York and Outlaw’s single with none out In the fourth, But Hank set down the next three, two of them on strikes and the other, Webb, on a pop to Hack.

The fifth was another more or less turbulent inning for the ex-Yankee, but it it had its compensations, at least for the Cub partisans. It brought Pafko’s throwing arm into the limelight. Mayo led off with a single to left and, after a pop foul had sent Cramer back to the dugout, Greenberg lined a single Into center. Mayo galloped for third, apparently having no knowledge of Pafko’s skill. Mayo slid toward third base, but he still was several feet away when Hack tagged him with the ball which had arrived with the accuracy of a rifle shot.

York opened the sixth a single to center and was safe at second when Hack, trying for a force play on Outlaw’s grounder, threw too late. However, the next three men accomplished nothing and Borowy was master from then on. 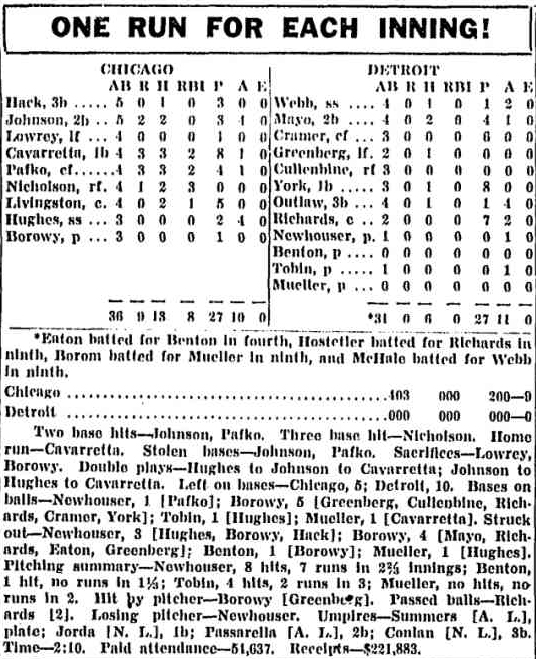 Cavarretta Blasts One
Possibly because they wanted to show they were pretty versatile fellows the Cubs waited to make move their move in the two run seventh after Johnson and Lowery had hit fly balls. Then Cavarretta added to his day’s achievements with the homer that bounced off the railing of the upper deck In right field.

The blasting of Jim Tobin’s butterfly pitch continued with a single by Pafko, his third hit. Pafko stole second with ease and a moment later was promoted to third by Richards’ second passed ball. Then Nicholson sdored Andy with a single, for the last Cub run and hlit.

Four Cubs who played major roles in shutting out the Tigers, relax in dressing room after the game. Left to right: Hank Bowry, who yielded six hits; Andy Pafko, and Bill Nicholson. Cavarretta contributed a homer, Nicholson a triple, and Pafko, a double among other items in the Cubs’ 13-hit attack.