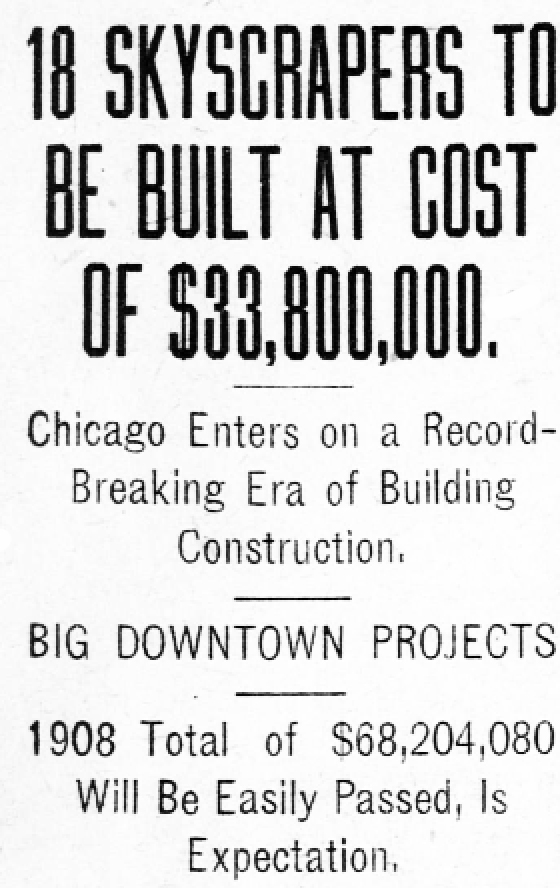 1908 Total of $68,204,080 Will Be Easily Passed, Is Expectation.
Chicago is entering upon the greatest building era of its history. With skyscrapers which this year will enrich the city’s downtown, architecture, and warehouses and apartments planned for the outlying districts, the record for 1909 bids certain to eclipse the great building operations of last year, which set a new high mark as to total cost and miles of
frontage.

There are now in course of construction, or definitely planned, not less than two score structures, costing anywhere from $200,000 up to $5,000,000 each. Never before at this season of the year was there such an array of construction work in prospect.

Rothschild & Co. to Build.
Yesterday came the latest announcement of tremendous building operations in prospect when Rothschild & Co., State street merchants, made it known that they have obtained from the Jonathan Clark estate an extension of their lease for seventy-one years, and will build within a year or so a towering structure to house their store.

The annual ground rental Is to be $84,000 for the property, including 245 to 255 State street. Additional leaseholds take in the remainder of the block between Jackson boulevard and Van Buren street with the exception of the Leiter Building on the corner of Jackson.

The figures In the Clark lease are in illustration of the remarkable advance in Chicago realty values. Twenty-flve years ago the property was leased to Jonathan Clark for $9,000 a year for ninety-nine years on a basis of ralne of $225,000. The value now is $2,100,000.

Especially in the central business district will the effect of the unprecedented building activity be apparent. Lofty office buildings, magnificent hotels, and at least one new first class theater, will replace small and old-fashioned structures.

Eighteen Big Buildings Planned.
Just now, with the year only one-twelfth gone, eighteen new downtown buildings are under way or projected. They aggregate a total cost of $33,800,000, which augurs a prosperous season for all who have to do with construction work, from the architect to the hod carrier.

Notable among these new monsters will be three hotels of a scope and magnificence seldom encountered. The LaSalle, now three months ahead of contract, is already under roof at LaSalle and Madison streets. The old Morrison wlll soon be torn down to make way for its imposing successor and the Blackstone is making rapid progress in Michigan avenue.

In outlying sections model factories, warehouses and dwellings will rise on property now vacant. Building operations of this character are planned on a scale which leaves little doubt that the record for 1909 will easily pass the $68,204,080 total of last year. The 1908 record, with almost fifty-six miles of frontage, exceeded the expenditures of 1906—the biggest year— by $5,000,000.

Besides the many structures which will make the present year a busy one for contractors and employes, a number of other building enterprises are in sight, and the actual construction work awaits only the arrangement of preliminary details.

In addition to the Commercial and Technical High School, Architect Dwight H. Perkins of I the Board of Education has asked the board to appropriate more than $8,000,000 for new construction.

Plan New Board of Trade Home.
A new building to be erected by the Chicago Board of Trade on the present site being discussed informally by the official information is being gathered in reference to the project to be submitted to the membership of the board. The present building has been occupied since 1885. There has been a growing sentiment among the members that too much space is wasted to form the dome, and the new building contemplated will be modern in every respect and all availabe space used for business purposes.

President Bunnell, when asked in reference to the matter last night, stated that no definite move had been taken as yet, and that all discussion regarding the proposed new building was with a view of getting the matter in such shape that it might be submitted to the members at
later date, possibly within the next year A special committee engaged in consideration of the matter consists of E. L. Glaser, George M. Reynolds. William S. Jackson, A. Stanford White, Reuben G. Chandler and James Petit. A vote of the membership is necessary before the project could be undertaken.