The North Western had owned a majority of the stock of the Chicago, St. Paul, Minneapolis and Omaha Railway (Omaha Road) since 1882. On 1 January 1957 it leased the company, and merged it into the North Western in 1972. The Omaha Road’s main line ran from an interchange with the North Western at Elroy, Wisconsin, to the Twin Cities, down to Sioux City, Iowa, and then finally to Omaha, Nebraska. 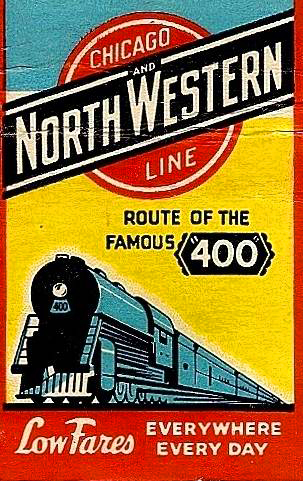 The CNW’s most famous train, the Twin Cities 400 from Chicago to Minneapolis/St. Paul, was introduced in 1935 to compete with the Chicago, Burlington and Quincy’s Zephyrs and the Milwaukee Road’s Hiawathas. This train was named because it traveled the 400 mi (640 km) between the cities in 400 minutes. CNW was the first system to start a high-speed Chicago-Twin Cities schedule because it used refurbished instead of new equipment, but in 1939, modernized the 400 with new E3A diesel locomotive pairs and streamlined cars. Other named trains the CNW operated included the Ashland Limited, Duluth-Superior Limited, and the North Western LimitedCNW eventually renamed the first 400 to the Twin Cities 400 as the CNW labeled almost all of its passenger trains with variations of the 400 moniker, including the Flambeau 400, Rochester 400, Valley “400”, Shoreland “400”, Dakota 400 and the Kate Shelley 400. CNW ceased running the Twin Cities 400 in 1963, and all intercity passenger service on CNW ended with the formation of Amtrak in 1971.

The North Western picked up several important short railroads during its later years. It finalized acquisition of the Litchfield and Madison Railway on 1 January 1958. The Litchfield and Madison railroad was a 44-mile bridge road from East St. Louis to Litchfield, Illinois. On 30 July 1968, the North Western acquired two former interurbans – the 36-mile Des Moines and Central Iowa Railway (DM&CI), and the 110-mile Fort Dodge, Des Moines and Southern Railway (FDDM&S). The DM&CI gave access to the Firestone plant in Des Moines, Iowa, and the FDDM&S provided access to gypsum mills in Fort Dodge, Iowa.

On 1 November 1960, the North Western acquired the rail properties of the 1,500-mile Minneapolis and St. Louis Railway. In spite of its name, it ran only from Minneapolis, Minnesota, to Peoria, Illinois. This acquisition provided traffic and modern rolling stock, and eliminated competition.

On 1 July 1968 the 1,500 mi Chicago Great Western Railway was merged into the North Western. This railroad went from Chicago to Oelwein, Iowa. From there lines went to the Twin Cities, Omaha, Nebraska, and Kansas City, Missouri. A connection from Hayfield, Minnesota, to Clarion, Iowa, provided a Twin Cities to Omaha main line. The Chicago Great Western duplicated the North Western’s routes from Chicago to the Twin Cities and Omaha, but went the long way. This merger provided access to Kansas City and further eliminated competition. After abandoning a plan to merge with the Milwaukee Road in 1970, Benjamin W. Heineman, who had headed the CNW and parent Northwest Industries since 1956, arranged the sale of the railroad to its employees in 1972. The words “Employee Owned” were part of the company logo in the ensuing period.

In April, 1995, the Chicago and North Western Transportation Company was merged into the Union Pacific Railroad.

An interesting note, the Union Pacific is the last major U.S. rail system whose name has never changed, dating from its charter in 1862 to build the nation’s first transcontinental westward from Omaha, Nebraska. Construction began in 1865, and was completed on May 10, 1869. The whole country, including Chicago, celebrated Union Pacific Day. Also notable for their longevity are Union Pacific’s shield-shaped emblem (1886) and yellow color scheme on its passenger cars and locomotives (1930’s).