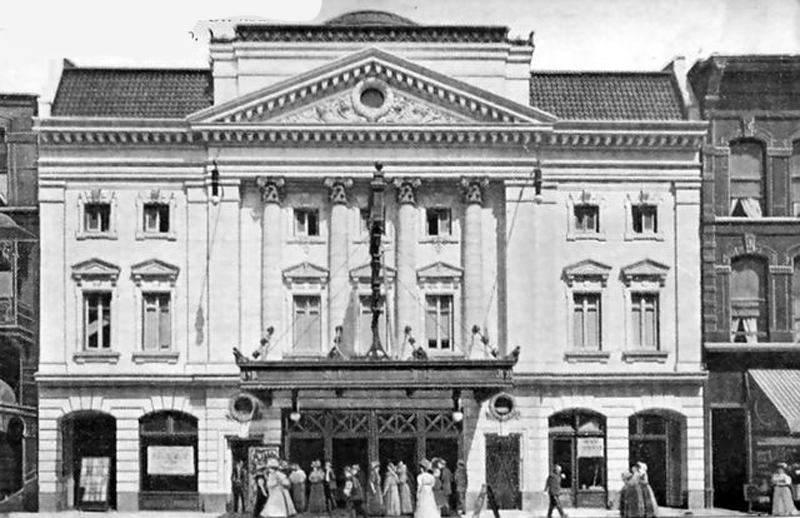 Mort H. Singer’s new Princess theater, the latest playhouse in Chicago, will be thrown open tomorrow night. Mr. Singer will still continue his management of the La Salle theater and his interests in the Askin-Singer company, which has on tour a half dozen important attractions.

The Princess theater is in Clark street, three doors below Jackson boulevard. It is built upon a lot 75 feet wide and 110 feet deep. Two great double doors exactly in its center open into the lobby, upon the right hand side of which is the box office, while in the corresponding position on the left are twelve foot wide stairs leading to the balcony. The entire lobby, as well as the stairs are of marble.

There are twenty-two exits and four wide steel and concrete safety tunnels, all lending directly into the street or a wide alley, while aside from the curtain and draperies the only inflammable material in the entire house is a thin board flooring over the steel girders of the stage.

The house is small, there being but 466 on the lower floor, 426 in the balcony, 48 in the boxes. and 52 in the loges, a total of 482 seats. There is not a post or pillar In the house, and there are but seventeen rows of seats downstairs and the balcony is brought forward to within twenty-seven feet of the curtain line.

By means of a ventilation system the air in the theater is changed every three minutes. It is drawn through cloths and purified as it is brought in, then run through a series of pipes, which heat or cool it, according to the atmospheric conditions. 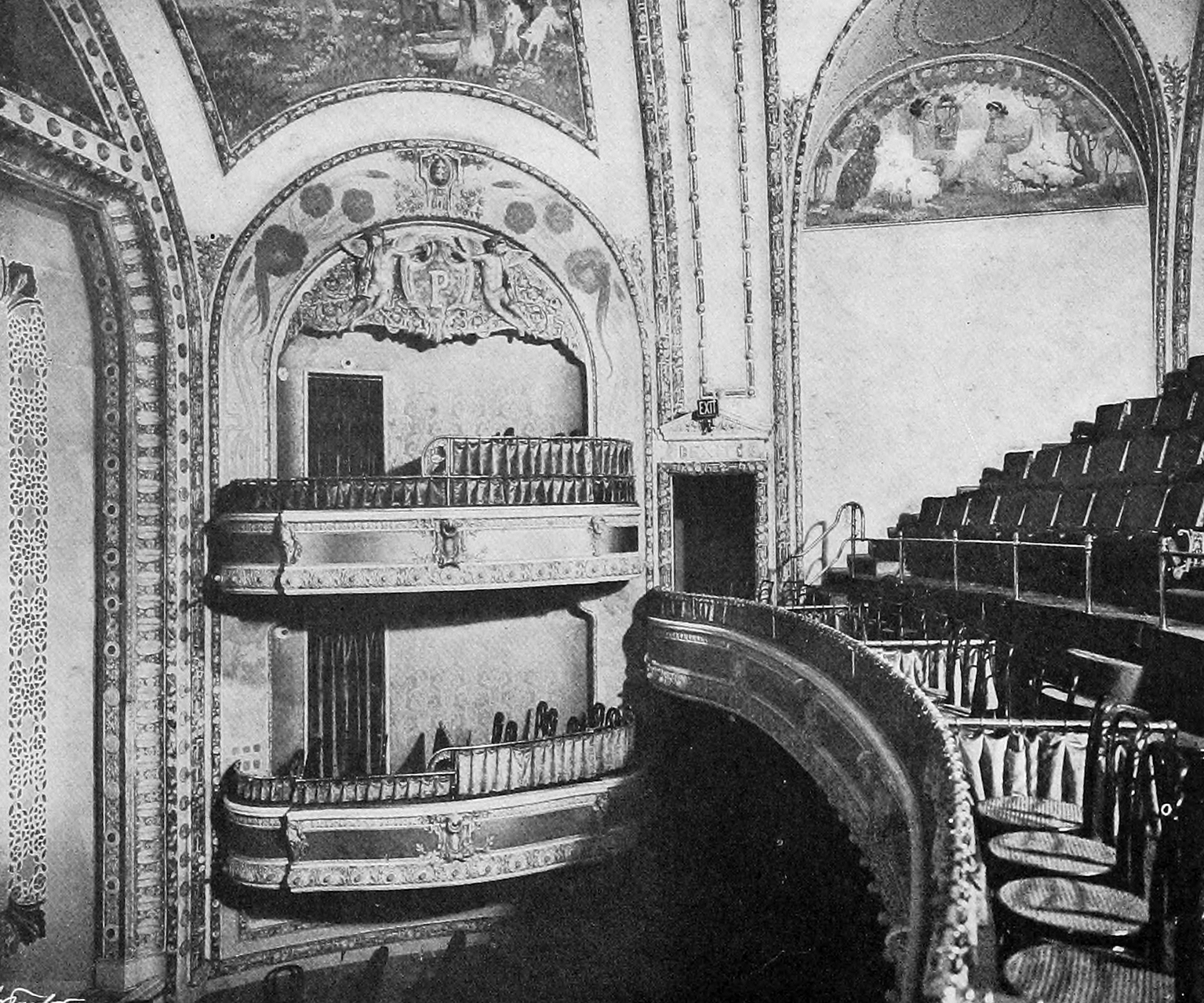 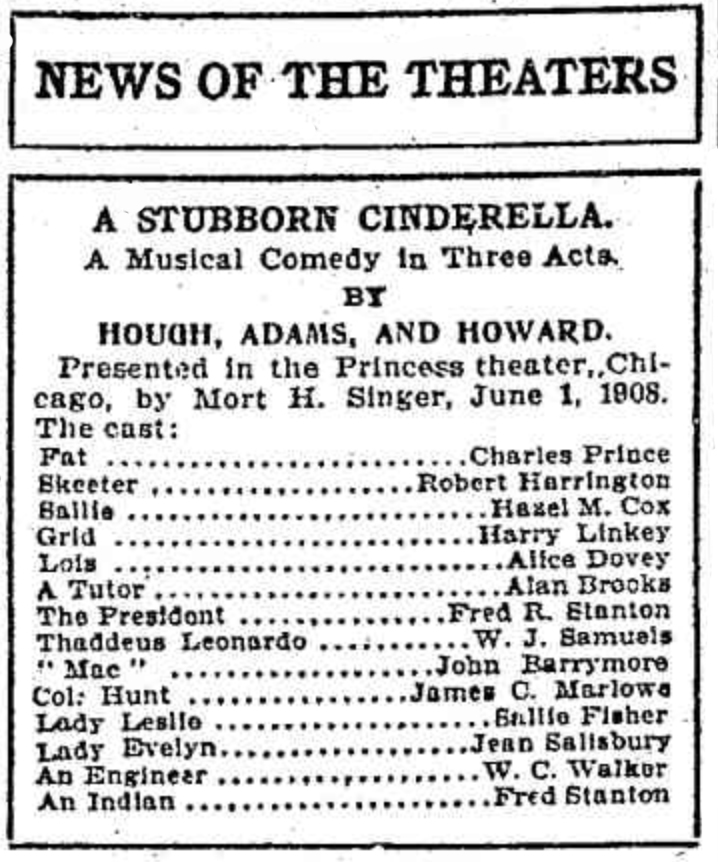 The formal dedication of the new Princesa theater was accomplished last evening and the grand old word gorgeous is none too grand to use in referring to the event. The playhouse was gorgeous in a tasteful and brilliantly new scheme of decoration. The stage was gorgeous with a quantity of new scenery. The girls were gorgeously arrayed in a series of costumes that would shame everything but a rainbow, there were cartloads of gorgeous flowers, and even the air itself was heavy with the gorgeousness of the occasion.

Prince Singer, who furnished the money that built the house and bought the costumes and paid for the play and urged the workmen to a eleventh hour finish. smiled wanly at the applause because he was too tired with the watching and anxiety to think much about anything else. But Prince Jack Barrymore1 and Princess Sallie Fisher and the other members of theatrical Chicago’s new royal family beamed and absorbed the applause with every evidence of enjoying it.

“A Stubborn Cinderella”2 is in every way a decided, advance upon any other musical comedy born in Chicago, and the new theater is, as it should be, seeing that it is the newest, the handsomest small theater in town. For once that inspiring combination, a new theater with a company and a play to match it, has been produced and the town is sure to be talking about it within the week.

It isn’t often that the of a musical play amounts to anything, and the story of “A Stubborn Cinderella” doesn’t amount to much. But what there is of it is charmingly ingenuous and quite original. It concerns a certain Lady Leslie, who is traveling in America and is permitted to stop in Chicago long enough to see the university grounds on the south side. She ls a dainty lady from Scotland, and she never has been kissed. Neither has she been permitted to associate with young people, It having been decreed by her guardians that she is to marry the Grand Duke Boris of Russia, of all people In the public eye! 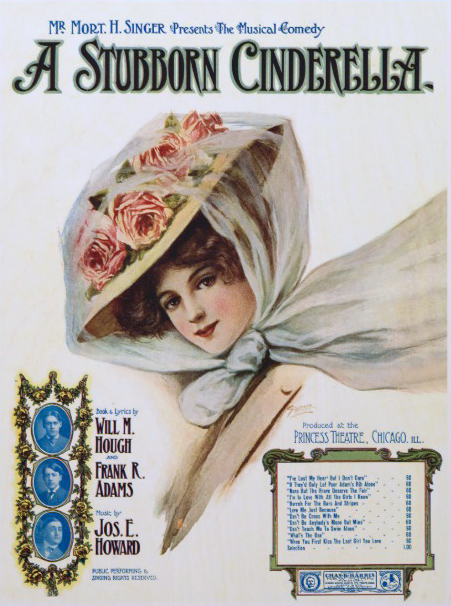 But when at the university her ladyship loses a few of her chaperons and runs into “Mac,” the prince of the class of 1908, Borls’ stock suffers a slump and Young America strikes a boom. “Mac” is something of a wild one, but he is willing to settle up and down if he is given a chance, and Lady Lesile appeals to his subconscious intellect as being that chance. Thus their acquaintance starts a romance that, although it hits the usual comedy angles, is kept fairly well to the fore through the succeeding acts.

The first change of scene and situation finds them all near Mexico mixed up in a train wreck. They are traveling toward California—Lady Leslie to meet Boris, “Mac” to get away from trouble and follow his true love, and the others just to be there for the choruses. This act gives the play its title, for it is here in the mountains that “Mac” tells Lady Leslie the story of Cinderella, while she sits before a campfire. And when she dreams of the story and of him in comes the ballet, just as it was described in the book, and he is the prince, with whom she dances the minuet. It is a charming interlude, and though it may have startled the somewhat blasé audience of last night it pleased them as well.

In the third act everybody is at the Hotel del Coronado, and here, when Lady Leslie is asked to drink the health of Boris and promise to marry him, she proves her stubbornness and her good sense by preferring “Mac.”

Happy “Jack” Barrymore2, as engaging as he is unconventional, began his musical comedy career with a success that will last him as long as and longer than that of his uncertain telegrapher In “The Dictator.” When they ask this irresponsible. quick witted youth how old he is he tells them he is 38, but that they have taken three years off for good behavior. When they offer to bet him $5 that he will never be able to kiss the Lady Leslie he daringly informs them that for $S he’d kiss a zebra. He calmly tells one man his father was a southern planter—an undertaker in Alabama—and when they ask him what he did when he was surrounded by Indians he blandly replies that usually he was forced to buy. This characterization by Barrymore will be a joy and a delight for the tired playgoer looking for something new and original once he gets it well In hand.

Sallie Flisher’s princess is a fine foil for the irrepressible “Mac,” and her dainty wistfulness, together with her beautiful voice, urges one to speak of her as the best of the light opera prima donnas. Certainly no one of them has sung as sweetly as she did last night—not in many seasons. There is no line of the performance that gives offense, and it mav be considered In all an earned success. 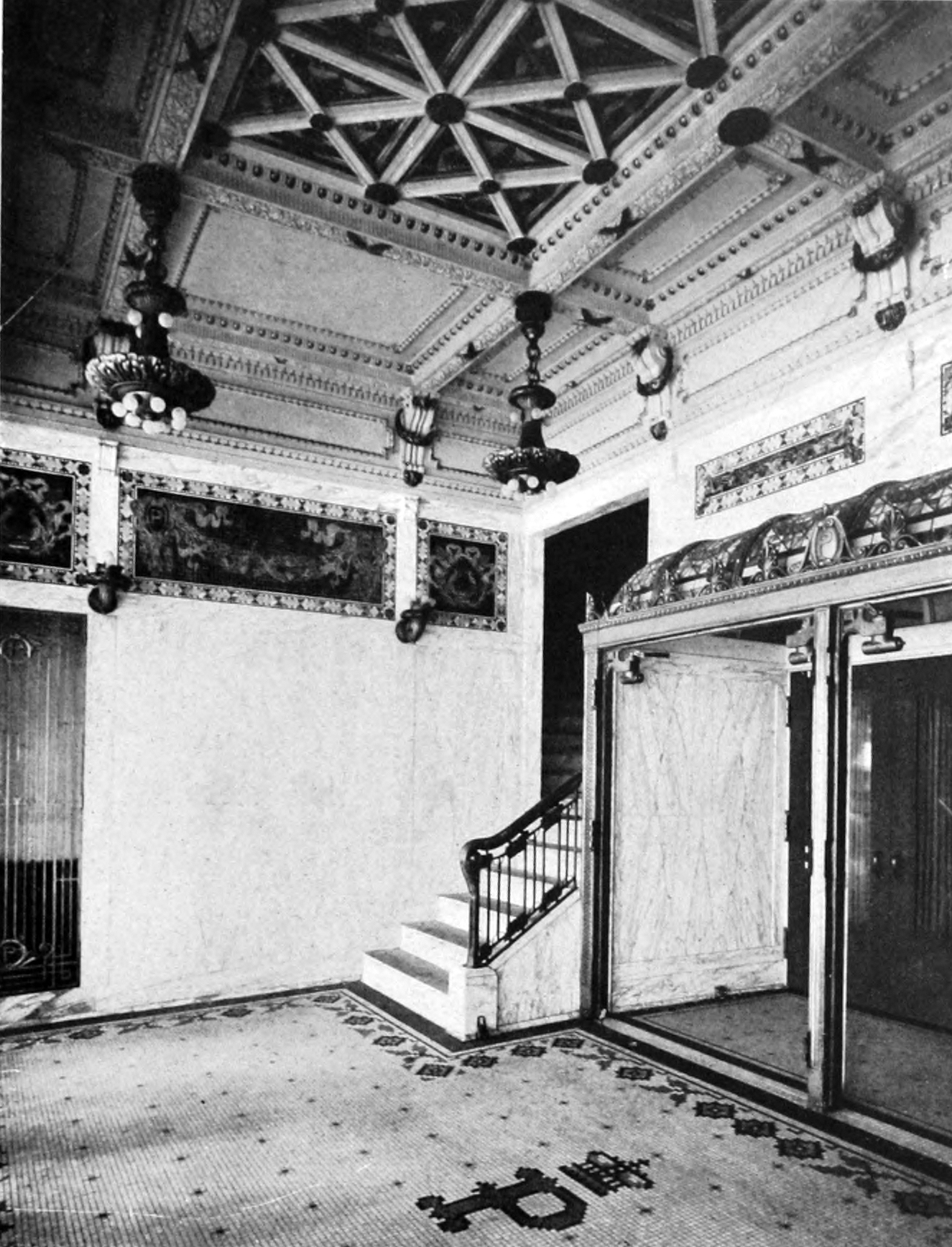 NOTES:
1 Jack Barrymore is the famous John Barrymore.
2 “A Stubborn Cinderella” opened at the Broadway Theatre on January 25, 1909 and played for 88 performances.