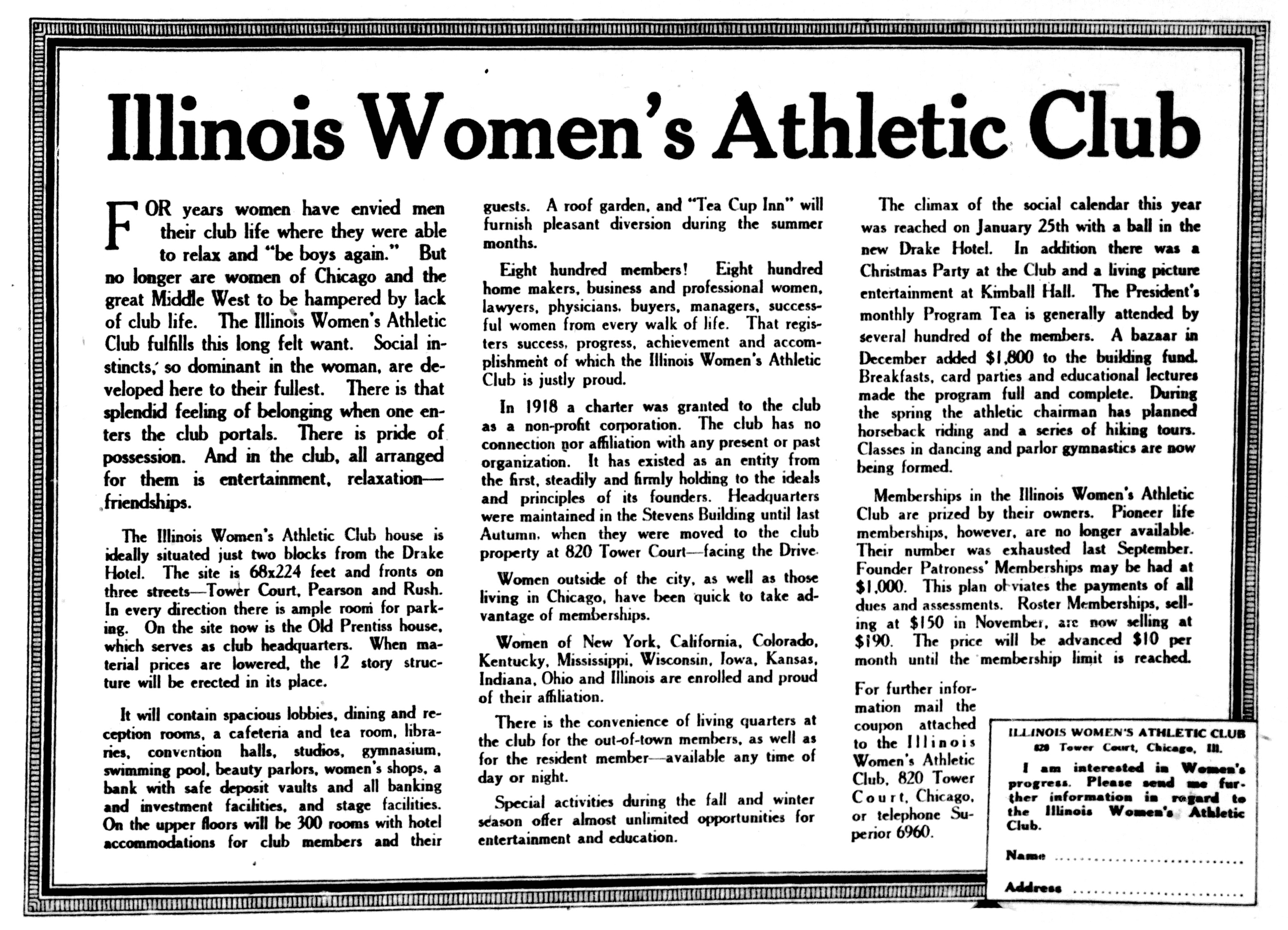 Announcement for the future construction of a new building. 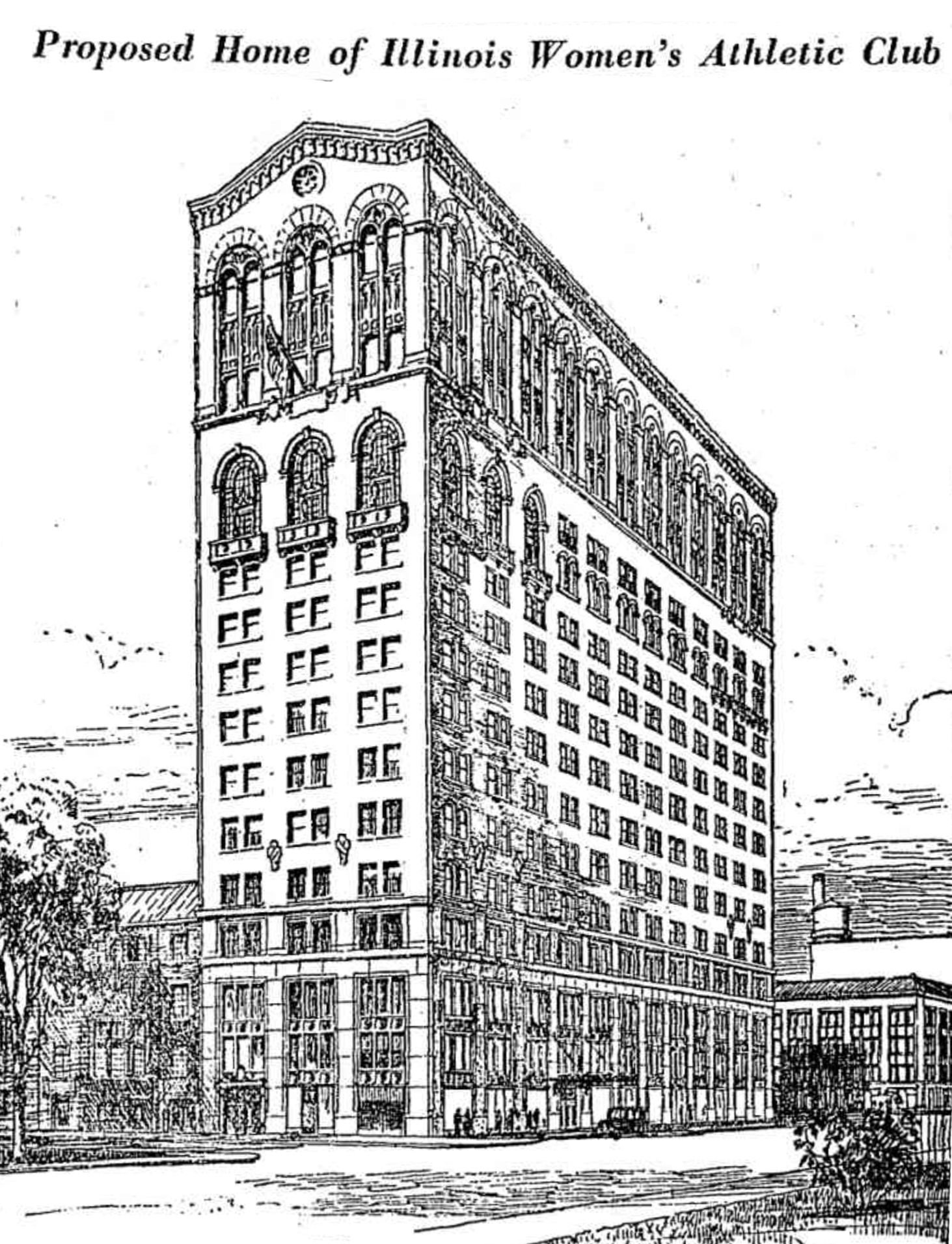 The new home of the Illinois Women’s Athletic club at Tower court and Pearson and Rush streets, designed by Architects Schmidt, Garden & Martin in the Italian renaissance, will be of rough faced brick trimmed with Indiana limestone. It will cost approximately $1,250,000. The same materials will be used on all four exterior walls. The attractive office building of Architects Parkins, Fellows & Hamilton, architectural pioneers in the north side district, is seen on the left of the new clubhouse, to the south.

Plans for fifteen story clubhouse, to be erected in Tower court, were outlined at a banquet of the Illinois Women’s Athletic club held last night in the Gold room of the Congress hotel. More than 150 prominent society professional and business women who are members of this unique club attended the affair.

At the speaker’s table, at which were the officers of the club a miniature of the proposed clubhouse, made of sugar and paste, was the center piece. The miniature was made and copied from the original design of the clubhouse by Joseph Weisskopf, pastry chef of the Congress hotel. 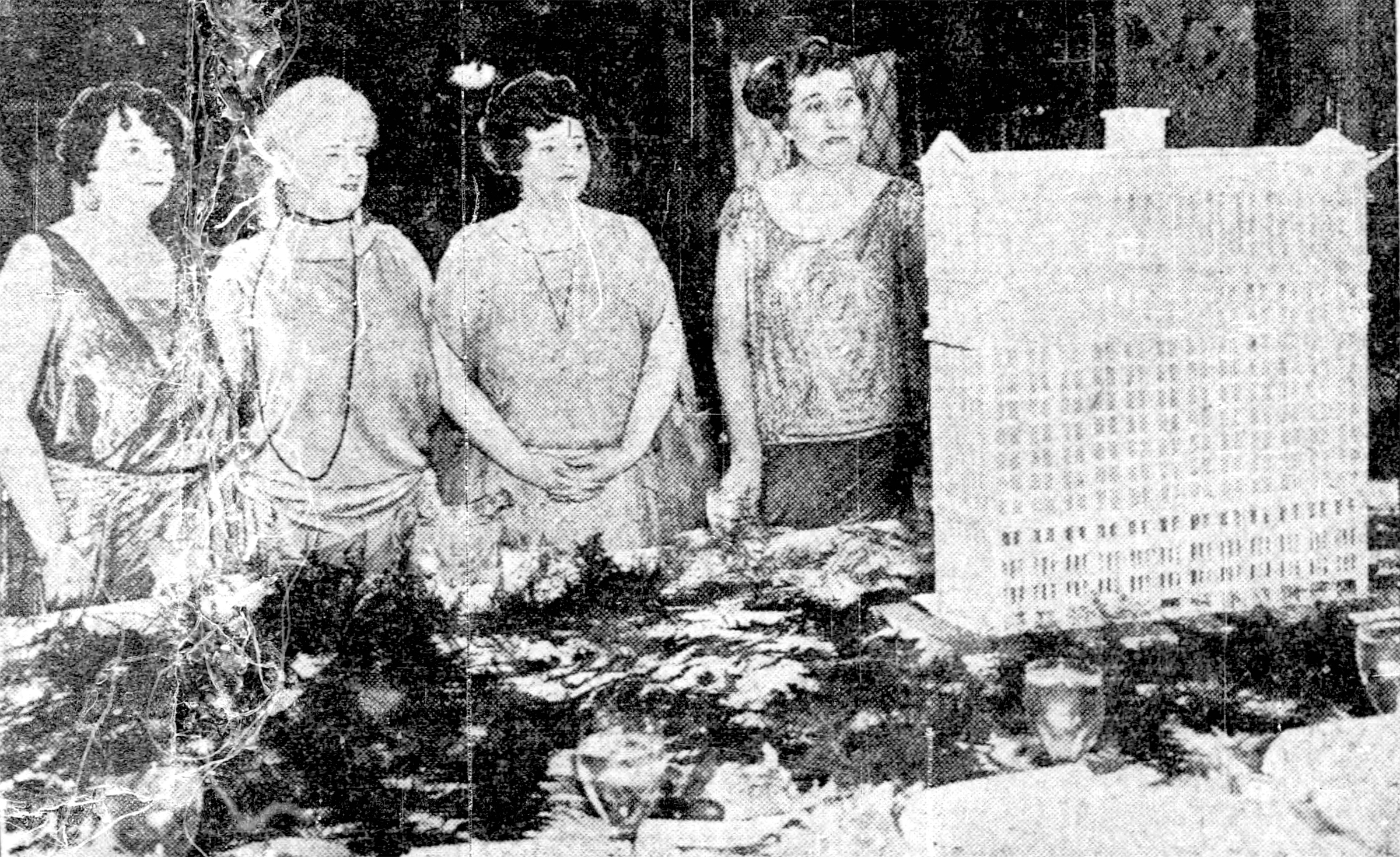 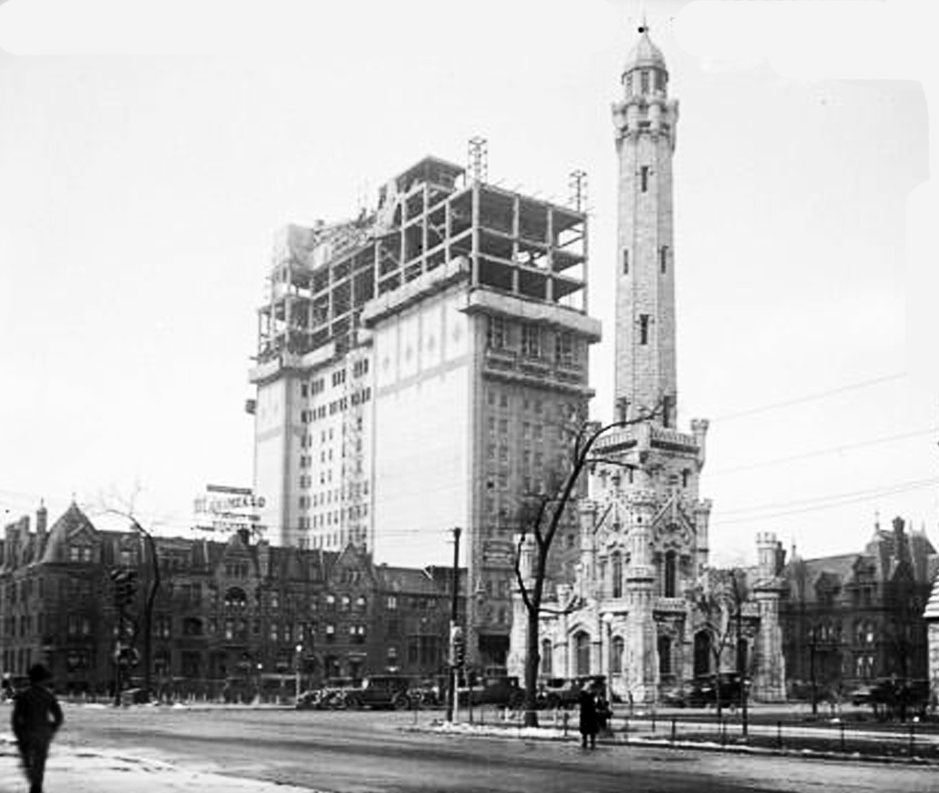 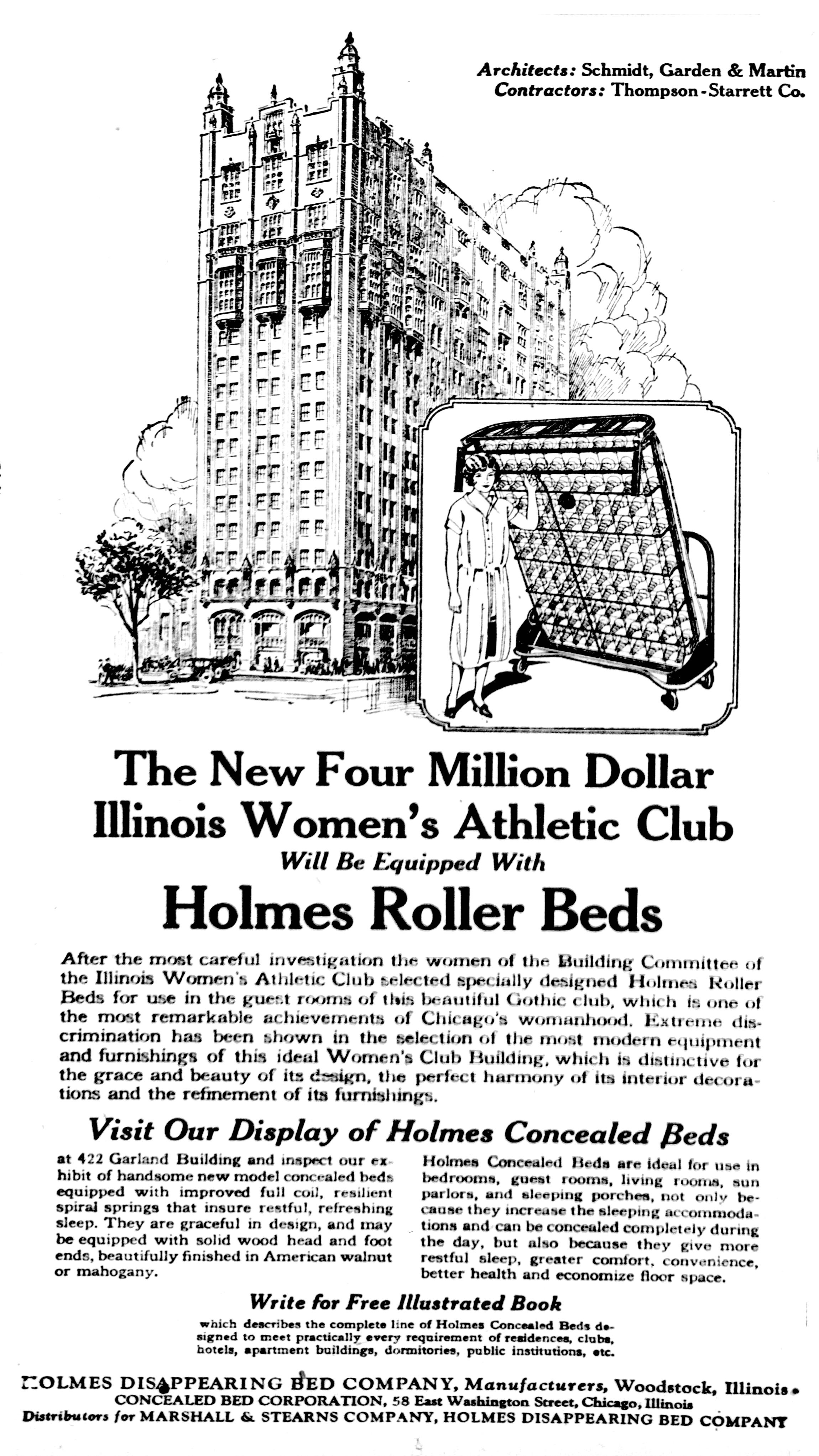 No greater illustration of the demand for and popularity of high class clubs in Chicago and surrounding towns could be given than the opening week, commencing October 20, in Chicago of the building of the Illinois Women’s Athletic club, located at Tower Court and E. Pierson street, facing toward Michigan Boulevard.

The building occupies a location eminent in the history of Chicago, the water tower standing directly in front of the club, and the neighborhood being one which was the center of the North side wealth and society in the earlier days of our city, the district has changed within a few years from a dreary series of rows of old residences, once in their social prime, but later devoted to boarding house and rooming purposes to one of the fastest developing and most attractive of the new business district north of the Chicago river; the Drake Hotel, America Fore, Pierson Hotel, Chicago Tribune, Wrigley, Allerton Hotel, and other large and fine buildings are within easy walking distance. The property which was bought by the founder members of the club less than ten years ago for under a hundred thousand dollars, has risen in value to nearly one million dollars, which the added value of the new building, brings the value of the club property close to $2,500,000.00 at a conservative estimate.

The organization of the Illinois Women’s Athletic club has been carried on from the first by women; many women active in social, political business and commercial life of our city and surrounding territory have been active in the work of building up the club. Mrs. Wm. Severin of Rogers Park was the originator of the idea of a cooperative women’s athletic club, to own its own building in Chicago. Memberships which sold in the early days of the club for three hundred dollars are now rated as worth $2,500.00 and selling at that price; while memberships of the class selling for from fifty to a hundred dollars in the beginning are now bringing a price well into the hundreds, owing ti real estate value increase and conservative management.

The lower floors of the building are being rapidly rented out for commercial purposes, and shops and offices are located higher up, while the club quarters occupy the highest portion of the building. Complete athletic equipment of the finest type is provided, including excellency, gymnasium and large swimming tank. Lobbies, parlors, large and small assembly and committee rooms, business offices also living quarters provided for resident members at a reasonable cost are all delightfully and luxuriously furnished.

The opening week offers a series of banquets and receptions some for members only and others for members and friends, closing with a large banquet and meeting on Tuesday evening Oct. 26, for all active workers in the organization officers of the club an invite guests prominent in city, state and national affairs. 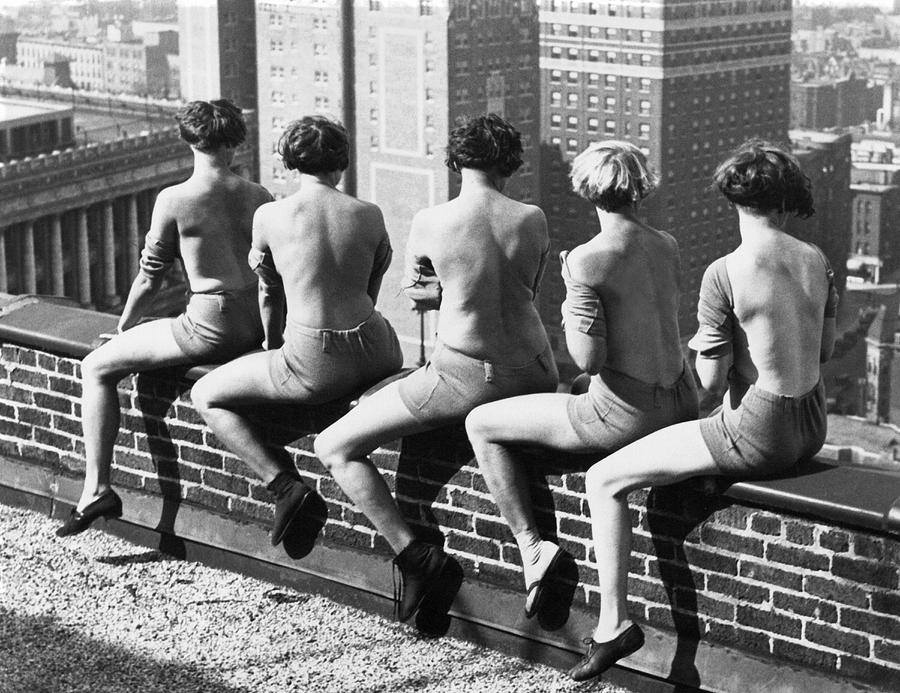 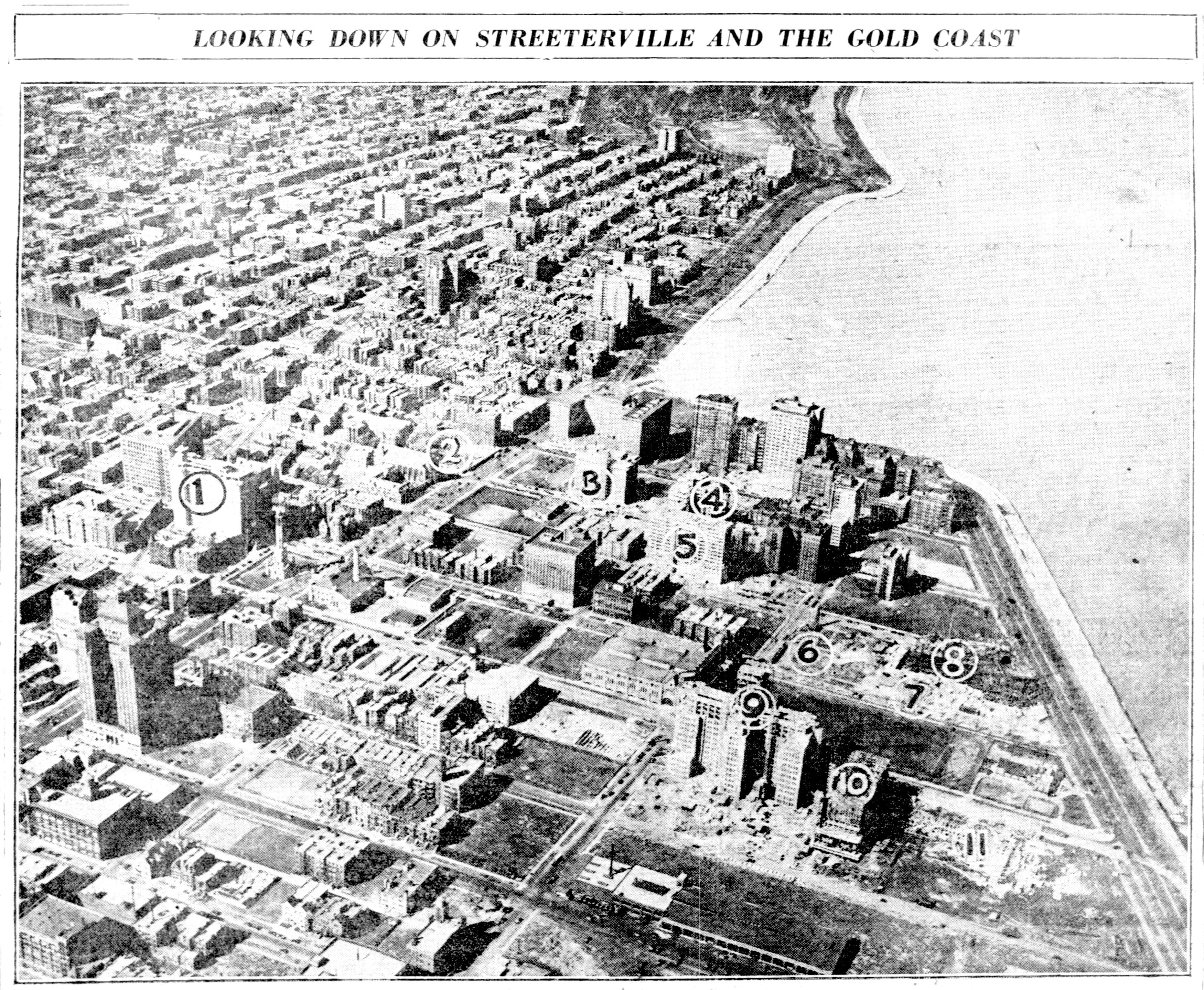 The Herculean courage shown by the women pioneers in this movement who conceived the idea, moulded the plan and put into execution the building of a beautiful 17-story clubhouse merits comments. A few years ago it would have been impossible for women to raise the money necessary for such a huge project. In making their dream a reality, these leaders have shown such a dynamic force that it is certain they will never suffer for their community to stand still. 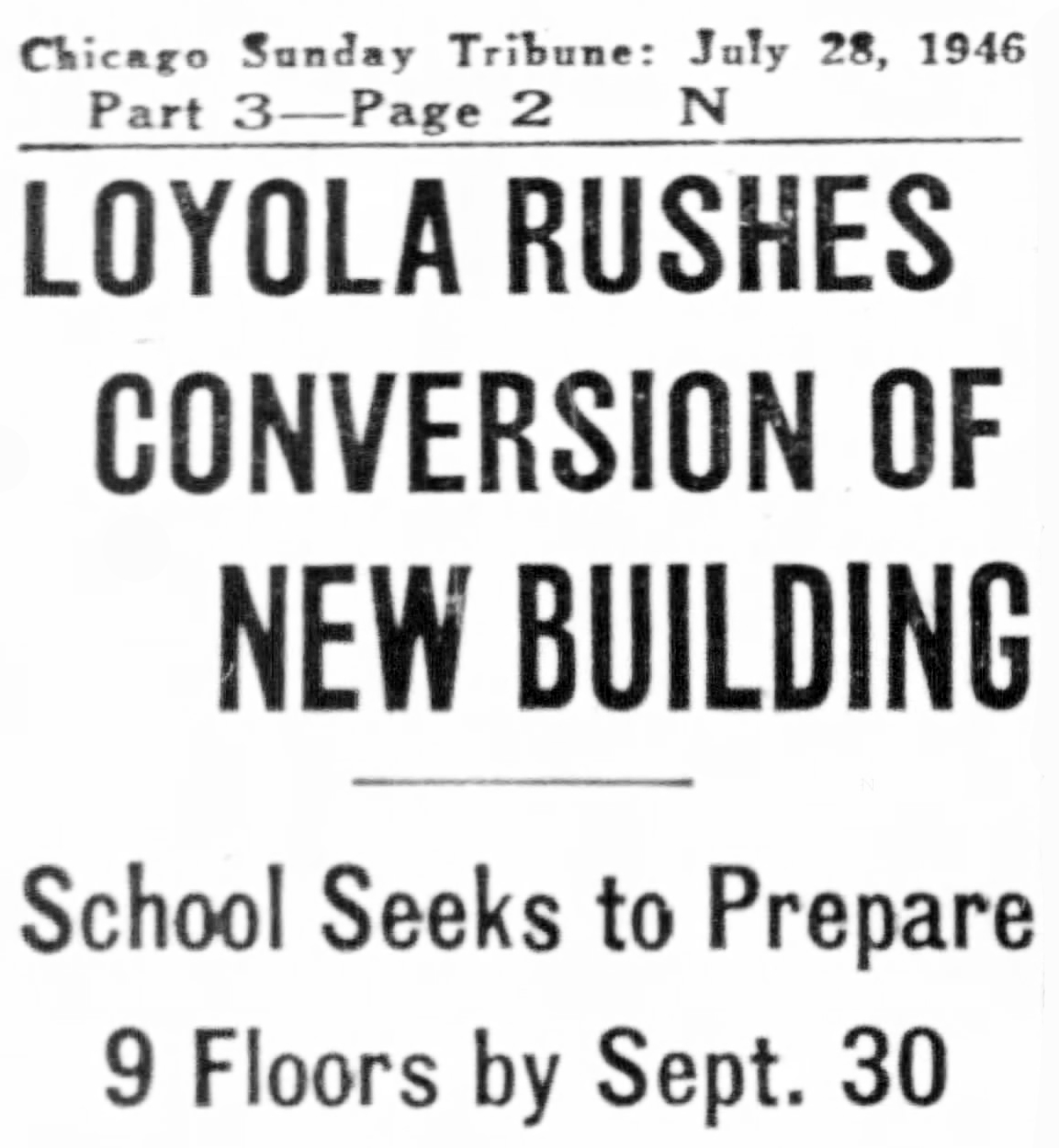 BY RUTH LOGAN
With Sept. 30 set as a tentative opening date for the fall semester, Loyola university is speeding reconversion of the first nine floors of Tower Court building, 820 N. Michigan av., which will house downtown divisions and most of the offices of the university.

Turned back to civilian use by the navy June 30, the building had been bought for $500,000 by Frank J. Lewis, manufacturer, and presented to Loyola and the Illinois Club for Catholic Women. The latter group will occupy the upper eight floors of the 17 story building.

Will Leave Franklin St.
With its space of 110,484 square feet converted into some 40 classrooms, three libraries, several laboratories, chapel, and administrative offices, the university expects to accommodate its enrollment increase of 40 per cent over the pre-war figure. All departments will be moved from the present downtown school at 28 N. Franklin st. to the new building. Fall enrollment on the Lake Shore and downtown campuses is expected to be more than 7,000.

Major task facing Malcolm J. Boyle Construction company, contractor, is remodeling cafeterias, dormitory rooms, and classrooms used by the navy for its midshipmen’s school into college classrooms and laboratories. It was also used as the navy’s shore patrol headquarters for this area with a complement said to be 2,000 men. The job also includes removing of bars from windows of the third floor brig, where the commerce library will be set up. 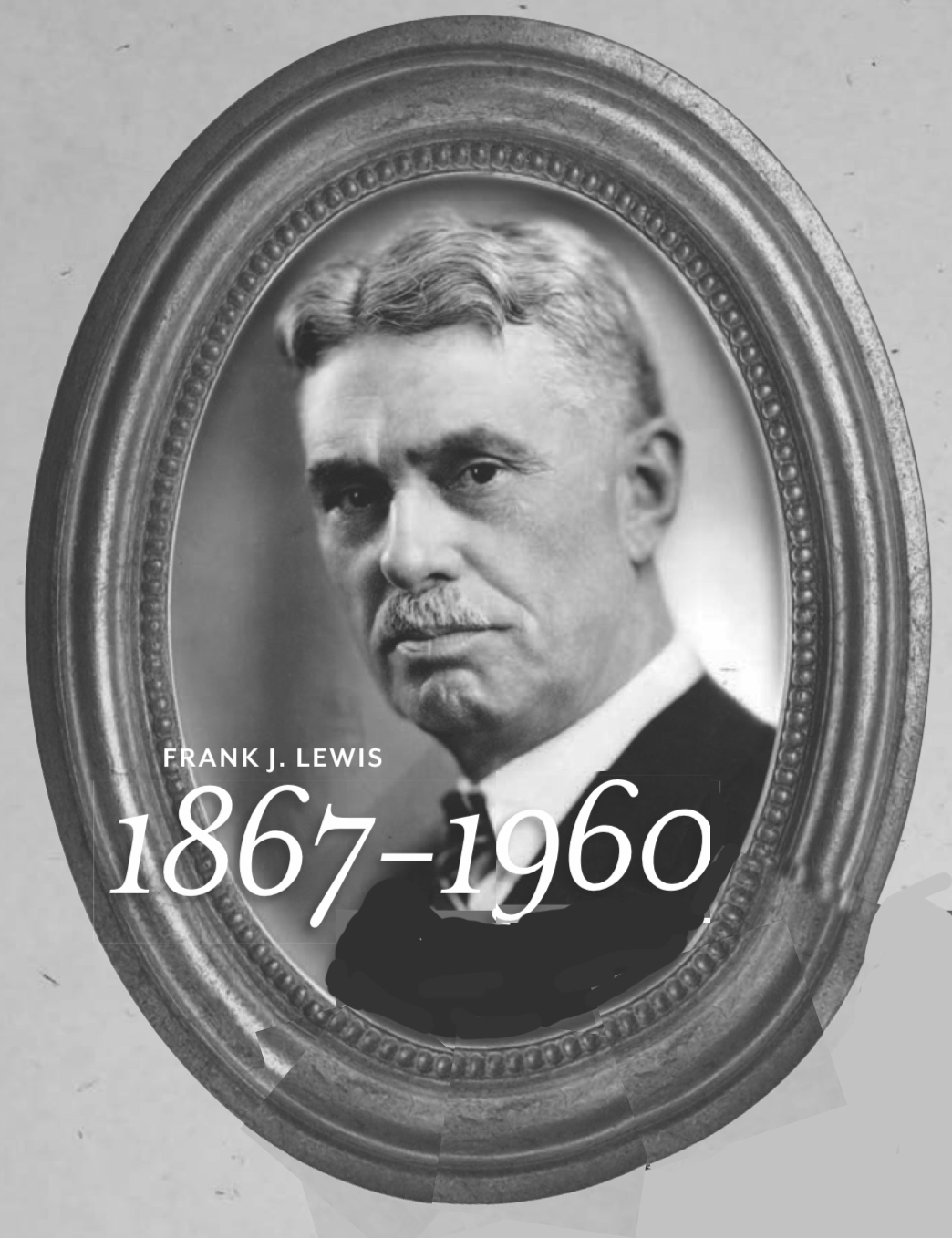 Among divisions quartered in the new building, to be called Lewis tower, will be the law school which will open with the fall term after a two year war time lapse. Dean John C. Fitzgerald, who is beginning his 18th year with Loyola, will head a faculty including five full time and four part time instructors. Class rooms and library will be on the ninth floor.

President on 7th Floor.
Tentative plans indicate offices of the dean, assistant dean, bursar, registrar, and the university college and school of social work will be on the fifth floor. Office of the Very Rev. James T. Hussey, S. J., president, and a general library will be on the seventh floor.

On the eighth floor a chapel will overlook Michigan av. A child guidance clinic and psychology laboratory will be established on the same floor. The commerce school will be on the third floor, the graduate school on the fourth, and a biology laboratory and publicity offices on the sixth. Other offices will include those of alumni, veterans administrator, dean of men, dean of women, and student counselor. Classrooms will occupy most of remaining space.

The property was sold last December by Prudence Bonds corporation, New York, which purchased it in 1943. Erected in 1927 by the Illinois Women’s Athletic Club at a cost of 3 million dollars, the building later was the home of the Illinois Club for Catholic Women for several years. 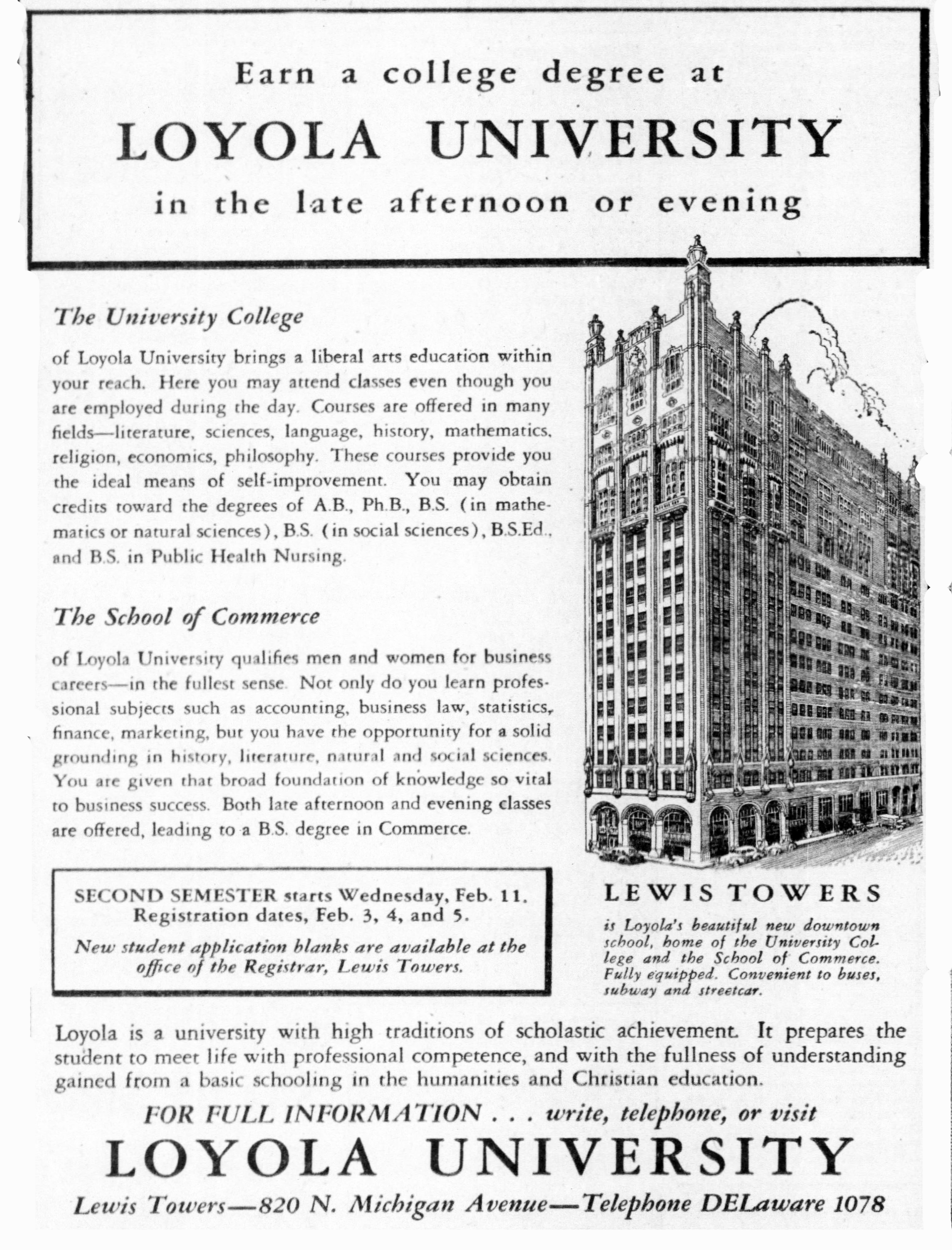 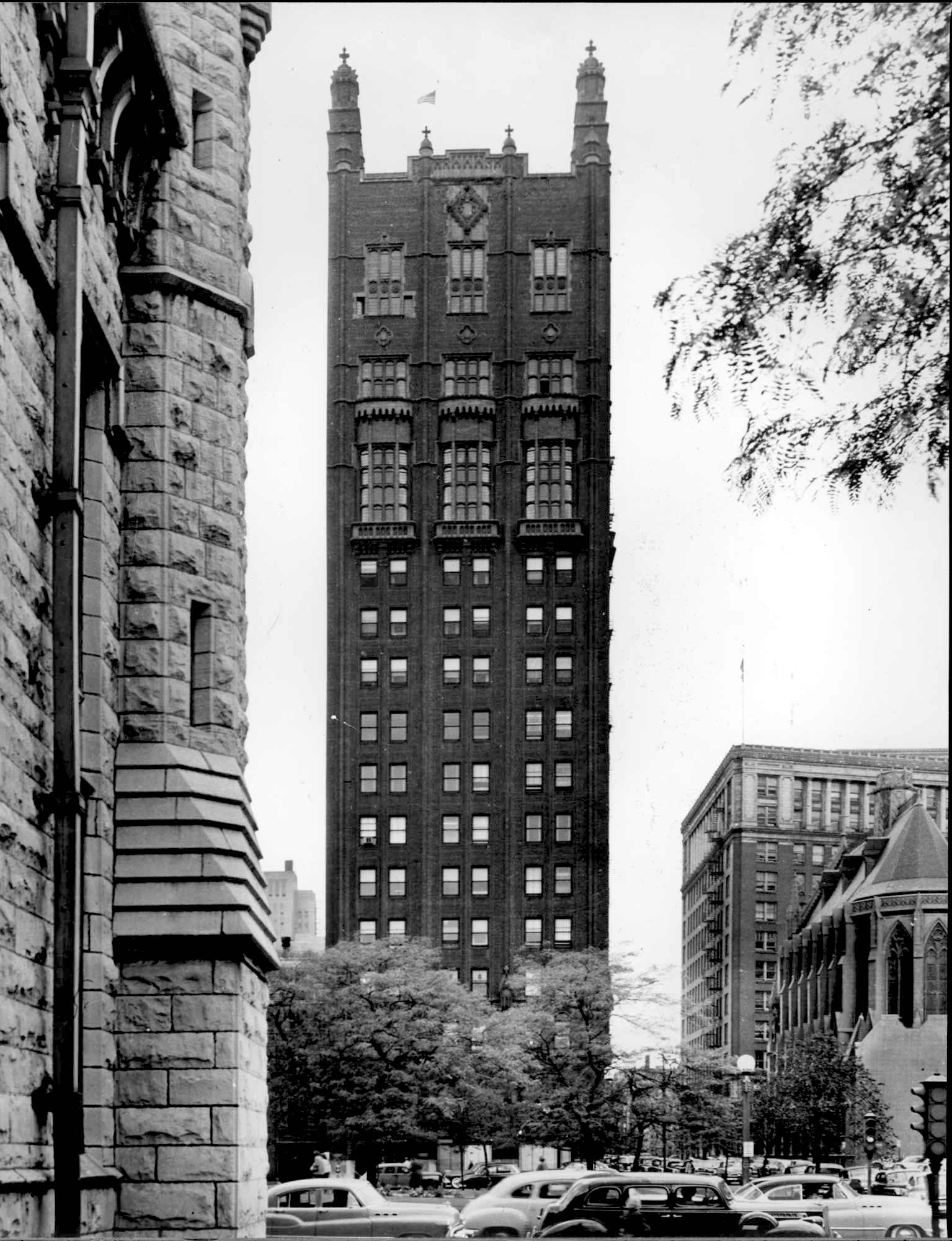