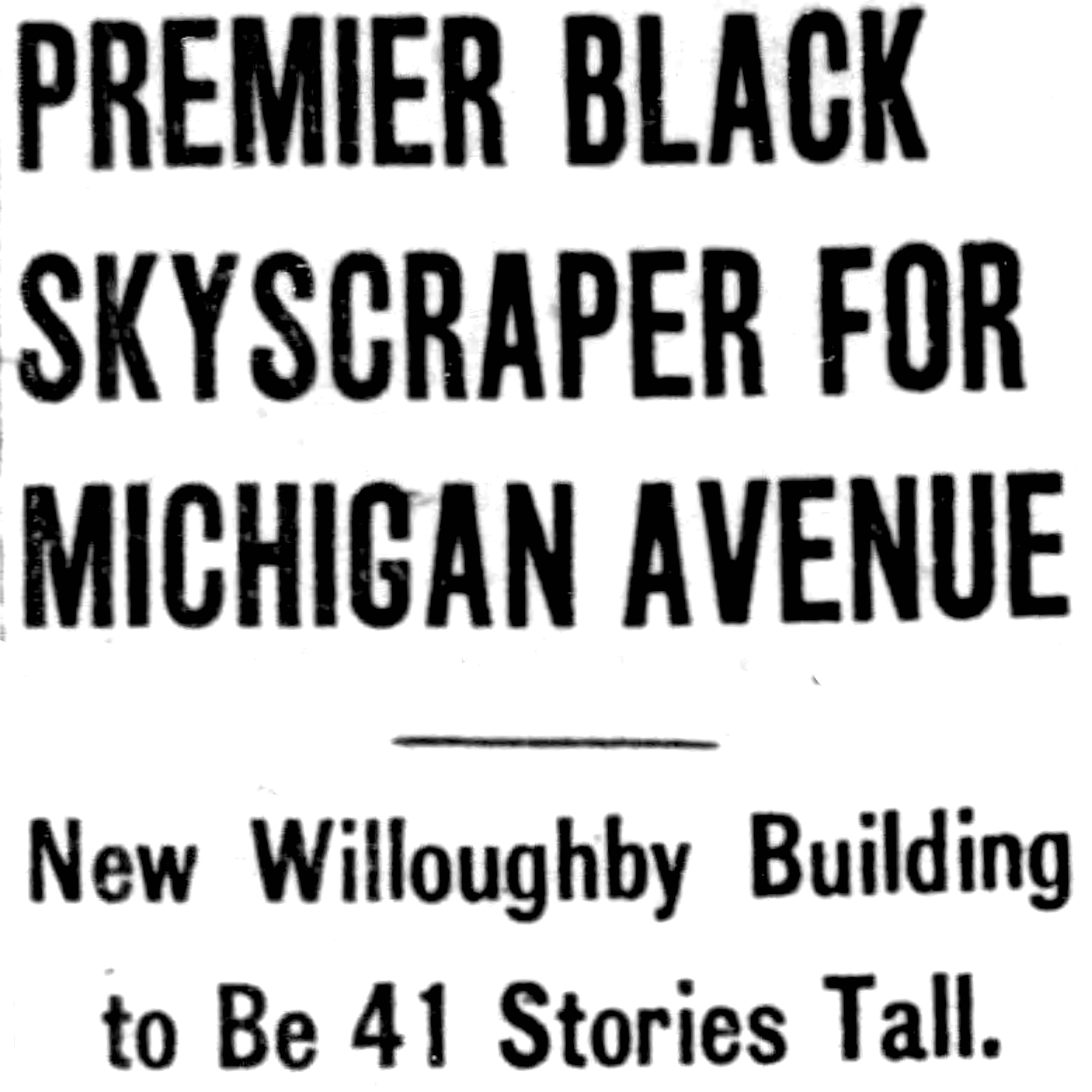 A grey and black Gothic tower building, forty-one stories high, is proposed for the southwest corner of Michigan avenue and Madison street, replacing the old Willoughby building. This will be Chicago’s first intentionally black skyscraper, although one erected in New York a year or so ago, the black and gold American Radiator building, has excited considerable comment throughout the country.

Details of the Michigan avenue project came to light when the articles of incorporation of the No. 2 South Michigan Avenue Building corporation were filed for record., the incorporators being Henry Ericsson, Samuel N. Crowen, and Walter H. Ericsson.

Syndicate Personnel Secret.
S. N. Crowen and associated, architects, drew the plans for the structure which is slated will be erected by an undisclosed syndicate. E. M. Willoughby of Willoughby & Co. owns the ground, which fronts 80.7 feet in Michigan and 109.35 feet in Madison. He is said to be leasing the site to the syndicate the terms not yet being available. With the land and building it is estimated that this project will represent an investment of approximately $5,500,000.

The first six floors of the structure are to be of Bedford stone. Then will commence the black brick (hence changed) which will be used entirely until about the twenty-third floor where there will be a series of setbacks. Here Bedford stone will be used again. The tower itself will be of black brick. Present plans do not contemplate the use of gold or other colors as in the New York building, contrast being obtained through the Bedford stone and the employment of some white brick.

To Be Gothic Throughout.
The Gothic motif will be employed throughout the interior as well as on the exterior, this style of architecture finding especial expression in the lobby.

Of the forty-one floors, thirty-six will be rentable. It is planned to make the structure a general office building, although some of the lower floors may contain shops. Stores will line the Michigan avenue and Madison street fronts.

There will be an observatory in the tower and the architects will have their offices just below the observatory.

It is stated that the razing of the present Willoughby building will begin on May 1, 1928, when leases expire or are terminated. The completion of Willoughby Tower, as the new structure will be known, is set for something over a year after work starts. The Henry Ericsson company will be general contractors.

The Willoughby & Co. will have the management of the new skyscraper, Chapman, Cutler, and Parker were attorneys for the lessor and George Trude represented the lesses. 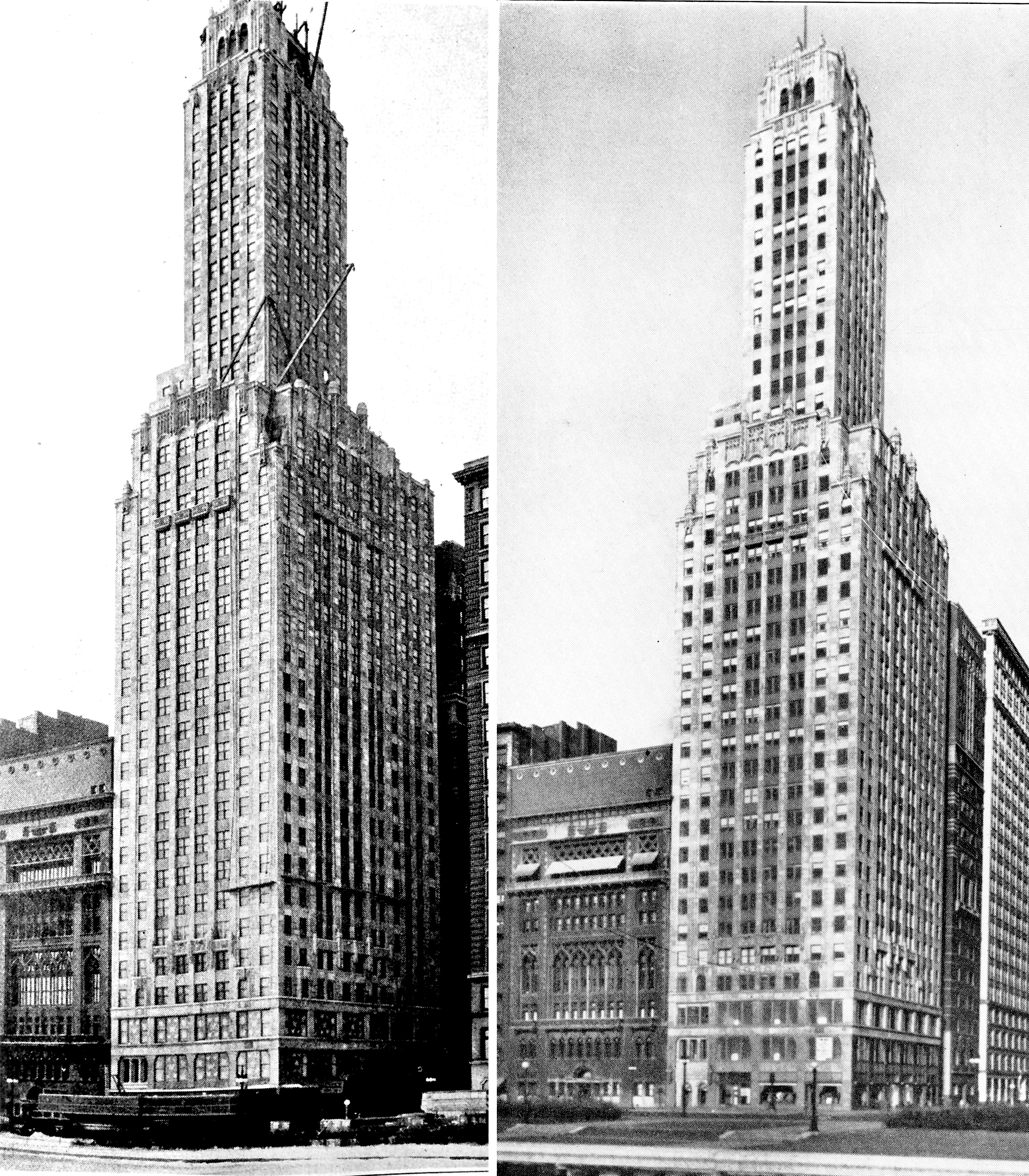 Willoughby Tower under construction and completed.

The former headquarters of the Chicago Press Veterans Association was located here. During the WorldÍs Columbian Exposition, Chicago journalists met while covering the event. Forty years later in 1933, at the Century of Progress, a reunion of the press veterans was held, a board was formed, and the organization began to meet once a year. Its goal: to provide working newspaper men and women engaged in the art of gathering, writing, editing, and illustrating the news of the day, an organization to share their common experiences. The Chicago Press Veterans Association changed its name to the Chicago Journalists Association in the early 2000s. The collection consists of original illustrations, organizational records and minutes, and books containing the written or illustrated works of its members.

The newest design for the Willoughby Tower, by S. V. Croweon, architect, to be erected at the southwest corner of Madison and Boul Mich was announced on February 4, 1928. It is almost changed from the first design shown in The Tribune of Sunday, Sept. 18, 1927. Instead of being black, it’ll be of variegated Indiana limestone on the two stret elevations, with the first two floors of granite. The tower will be flood lighted. Work starts May 1, 1928.

S. N. Crowen and associates have leased the 39th and 40th floors in the new Willoughby tower at Michigan and Madison, and will move there on March 1, 1929. The new quarters will be finished in walnut, mahogany and English oak. The executive offices will be on the 39th with the drafting rooms on the floor above. The balance of the Willoughby tower, of which Mr. Crowen is architect, will be completed by April 1.

Grand Trunk Rents Corner in New Willoughby Tower
The Grand Trunk railway system has leased the ground floor corner store in the new Willoughby tower, Michigan and Madison, and will have what is claimed will be one of the most elaborate ticket offices in the country. Willoughby & Co. negotiated the lease. 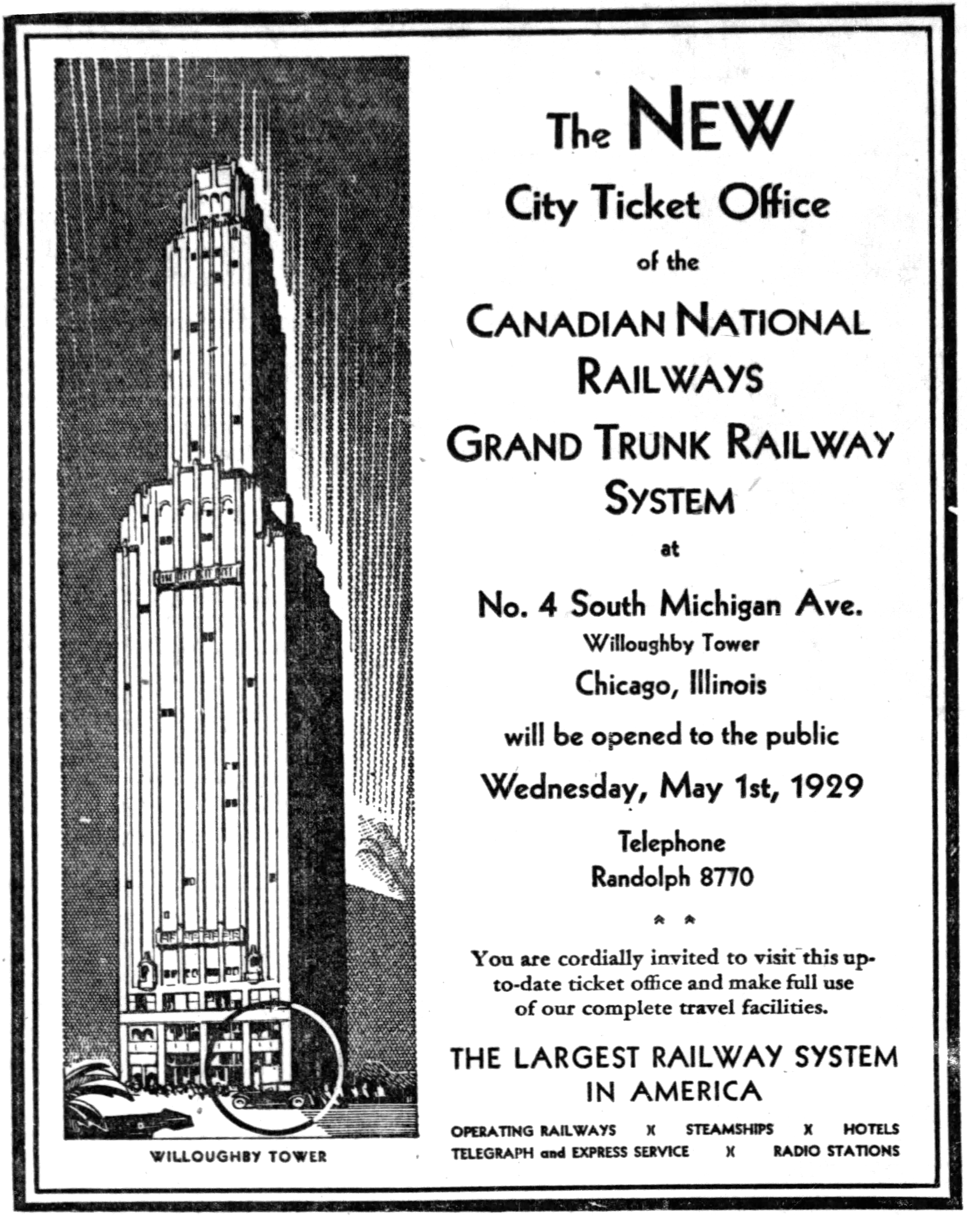 In line with the modern business policy of placing the goods attractively before the public, the Grand Trunk Western-Canadian National Railways opened a new ticket office and travel information bureau May 1st in the heart of Chicago’s most exclusive shopping section, situated in the Willoughby building at Madison street and Michigan boulevard. The accompanying illustration shows its attractive appearance. It is in charge of A. B. Chawn, general passenger agent, and C. B. Ortenburger, general western passenger agent. 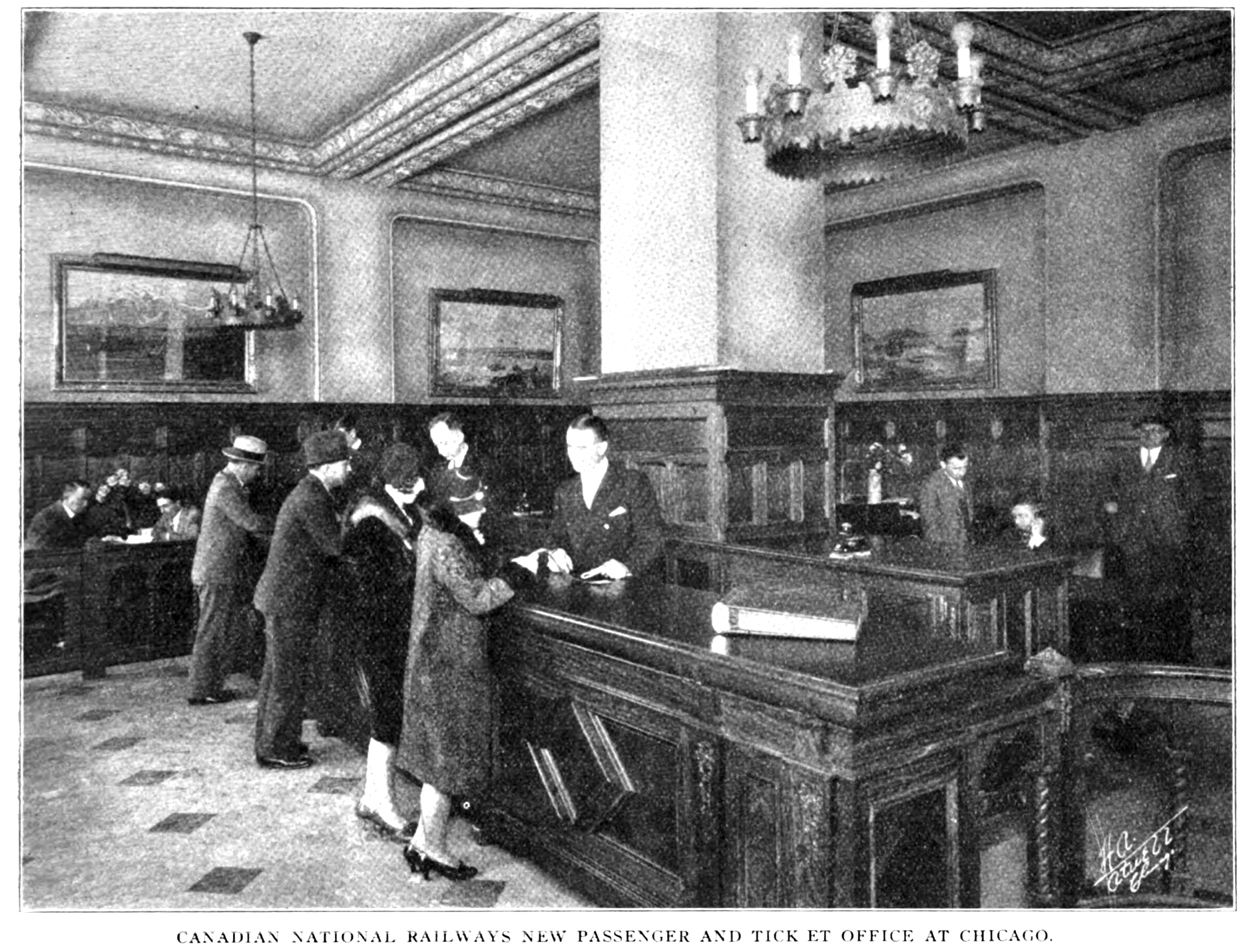