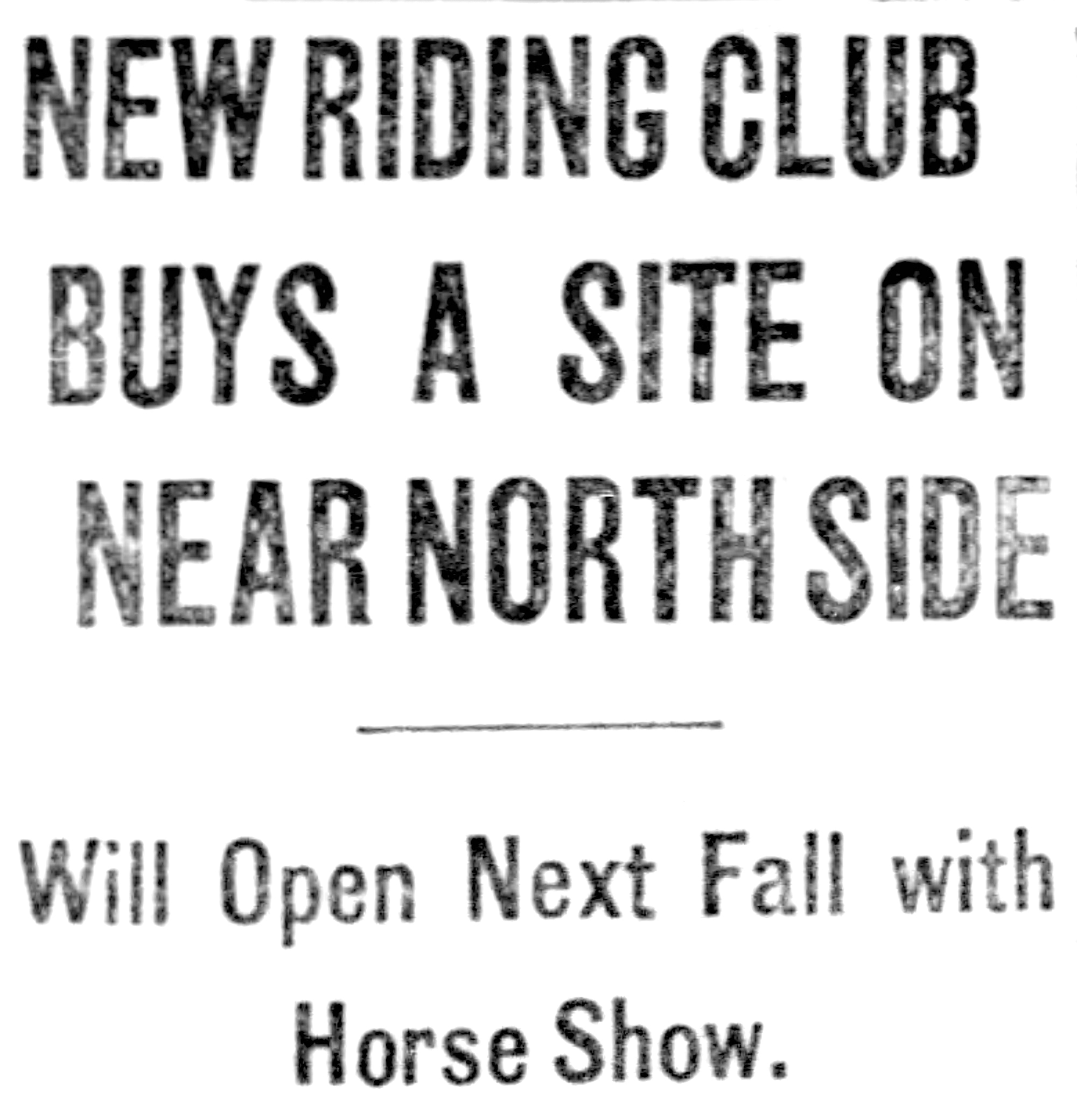 Chicago’s newest social sporting organization, “The Riding Club.” tentative plans for which were published recently, yesterday purchased a site on the west side of McClurg court, extending from Ohio to Ontario street, on which a $600,000 club house is to be built. The total investment in land and building will be more than a million dollars.

The new club will open next fall with a horse show which it is expected will outrival anything of the kind the middle west has ever seen. The various polo clubs around Chicago are planning the organization of an Indoor Polo league with a regular schedule of games every week, to be held in the new Riding club. In addition there’ll be weekly “music rides,” an equestrian feature Chicago has never had, exhibitions, horse sales, etc.

To Be Finest in Country.
At present, Chicago is the only large American city which hasn’t a high class riding club. The new organization will have the largest, most modern and best equipped building and the finest exhibition ring in the country.

Plans have been drawn by Architects Rebori, Wentworth & Dewey for a fireproof structure of the old English type, with half timbered effect, which will be completed within six months It will have a riding ring 305 feet long and 130 feet wide, with balcony around it. There’ll be stable accommodations for 500 horses; a clubroom, a lounging room, locker rooms, showers, etc.

Above is the latest thing in Chicago clubdom, “The Riding club,” is to be built on the west side of McClurg court between Ohio and Ontario, from plans by Rebori, Wentworth & Dewey.
It will represent a total investment of more than a million dollars. More is told in a nearby column.

Preference in the allocation of stalls, use of riding hall and tickets for all horse shows, polo games, music rides and other entertainments will be in the order of and according to the class of membership. 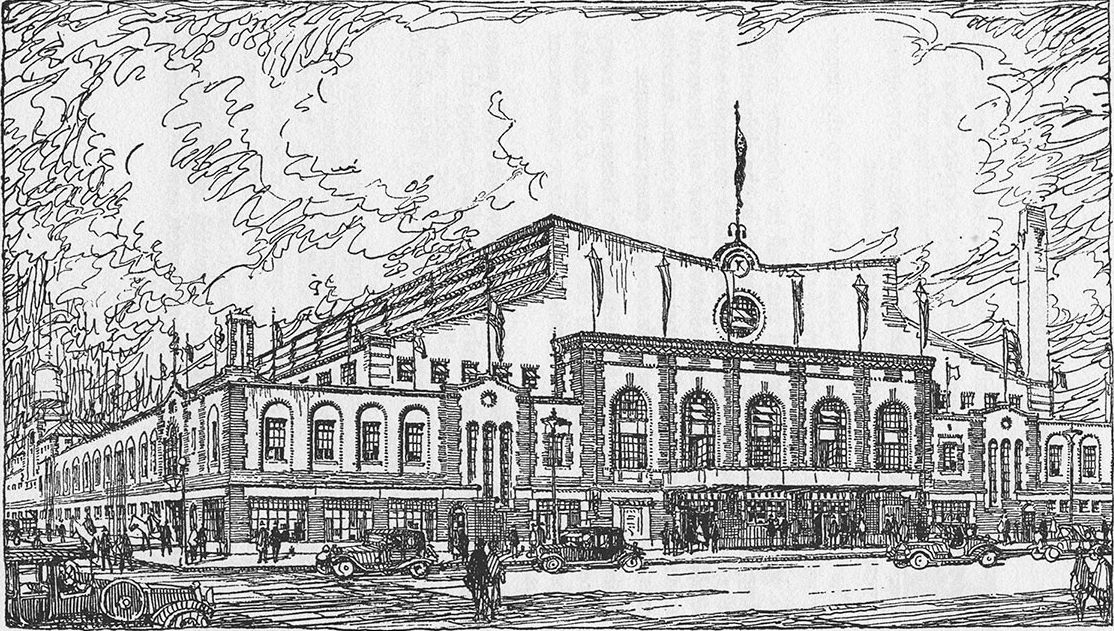 Chicago Riding Club Brochure
The general character of the Riding Club, both exterior and interior, will be along broad simple lines. Red brick trim and white cement wall surfaces will predominate in an harmonious color treatment of the exterior. 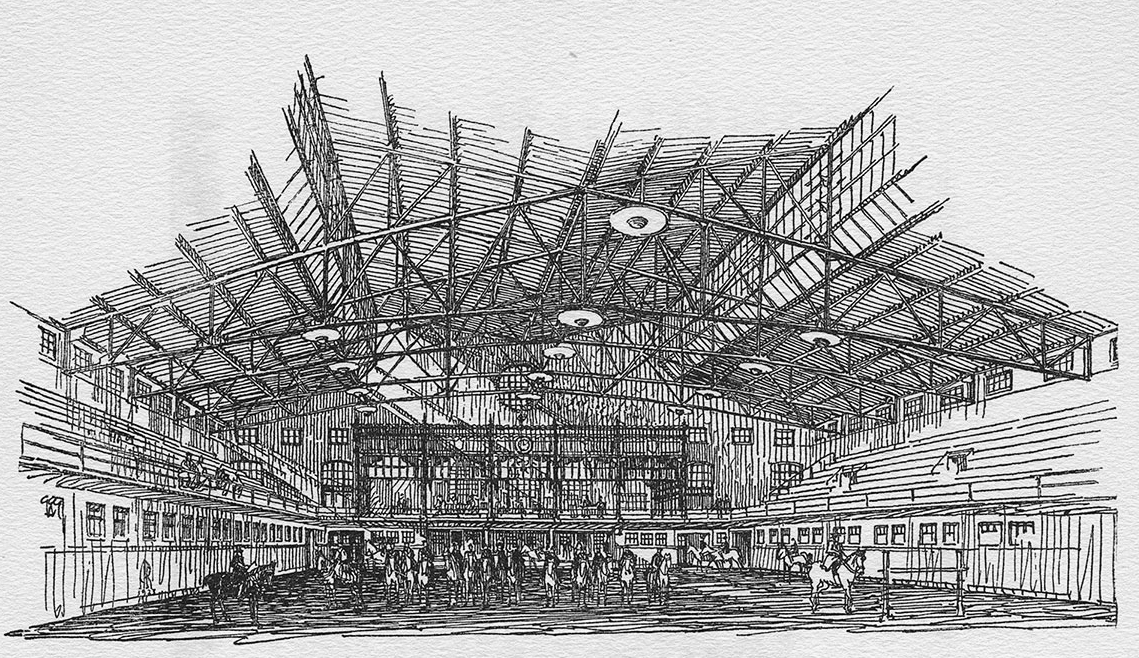 Chicago Riding Club Brochure
The Ring, with its wide, unobstructed, clear span, will be well lighted and ventilated by means of automatically operated windows, broad and ample, running the full length of the building. Banks of seats at either side flank the Observation Club Room at the entrance end.

L. M. Newgnas of 113 West Adams street, telephone Randolph 4140, is in charge of the membership application blanks of the new club. 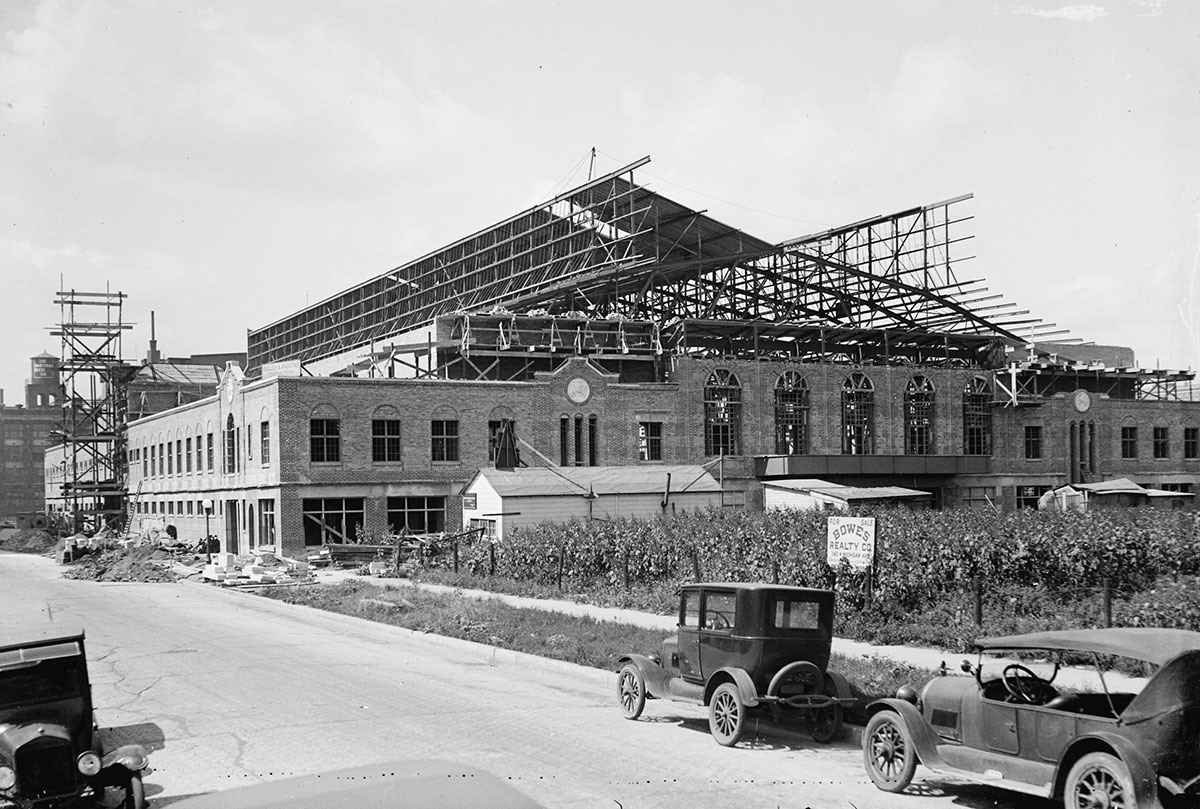 Chicago Riding Club, About 1925
630 N. McClurg Court
In 1954, CBS purchaseed the building for use as television and radio studios.

The big moment of the year will come a week form next Monday night, Dec. 15, when the doors of the Chicago Riding Club are to be thrown open and the city’s newest tan bark ring will make its formal bow to the public.

The official opening of the club has long been awaited by Chicago horse lovers. Since ground for the new institution was broken last February, interest in the riding club has been mounting steadily.

Twenty Minute Polo Game.
A festive program has been arranged for the opening night. There will be an exhibition of saddle and hunting horses. A twenty minute polo game will also be played. The general program will last about an hour and after that all the guests will be invited to ride about the new ring. Throughout the evening a picked band will hive a program.

In order that the club shall be completed on Monday night the contractor is pushing his workmen night and day, because the work is some six weeks behind schedule, but the officials of the club were confident last night that the structure will be in readiness by the opening night.

Best Kind in U. S.
The Chicago Riding club structure is the first building of any size to be constructed in Chicago for the exclusive use of horsemen. It is to be more spacious and better equipped than any riding club in America. The stalls will accommodate 460 animals. The tan bark ring is the largest arena in the world that is devoted exclusively to riding and equestrian sports.

The new club will afford facilities for polo, for horse shows, and steeple chases. The seating capacity of 3,000 will be increased to 5,000 for special shows and entertainments. 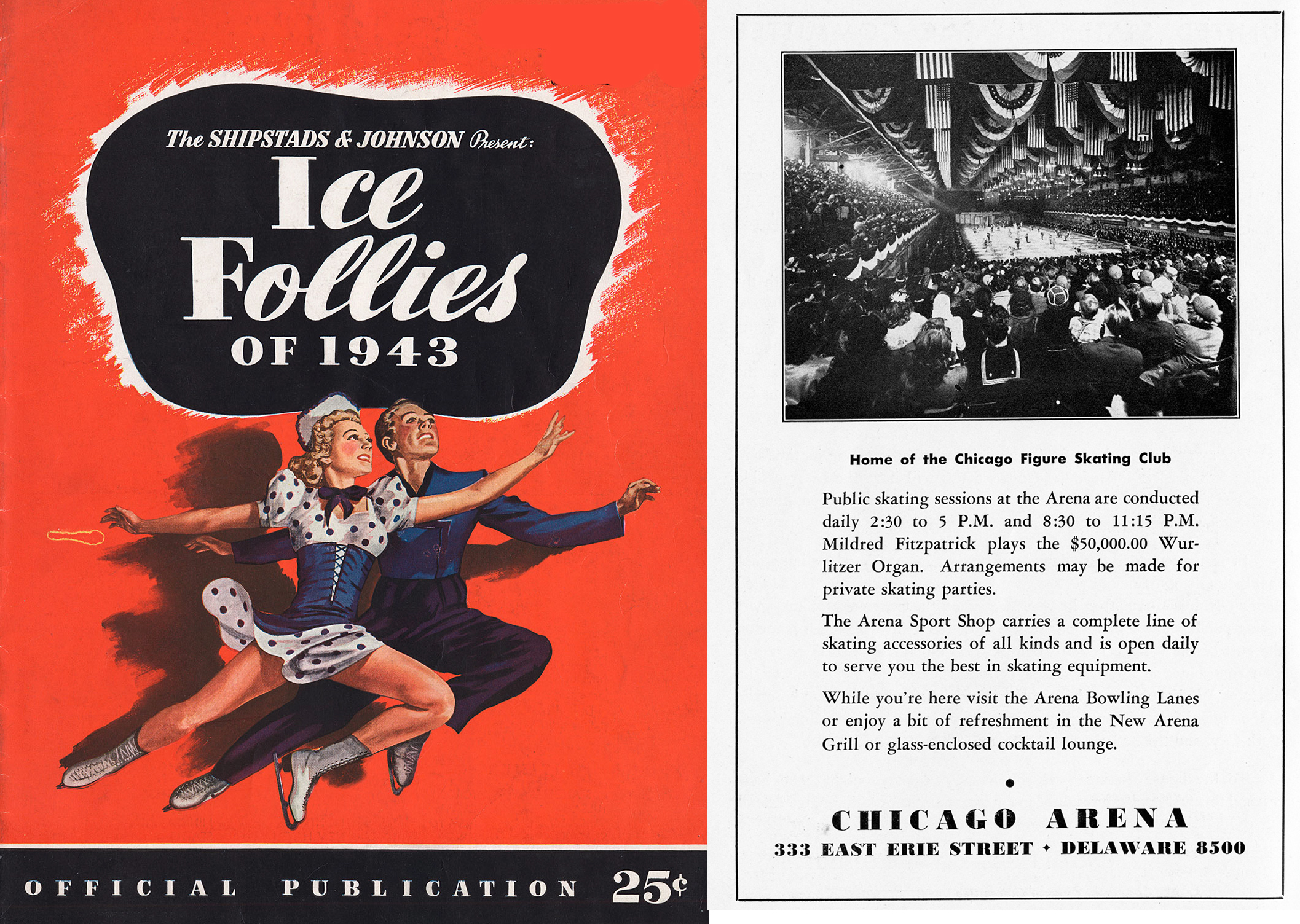 The Riding Club of Chicago didn’t survive the Great Depression, and 12 years later, the building was converted into the Chicago Arena, a place for less elite amusements. 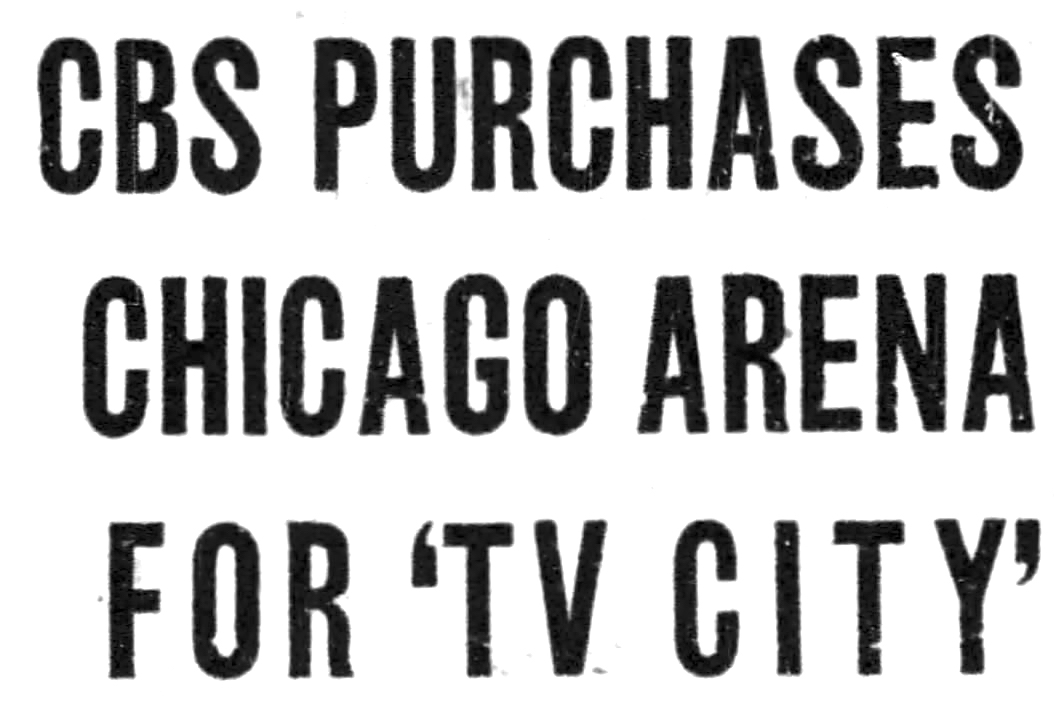 The Chicago Arena has been sold to the Columbia Broadcasting System for conversion into a “television city” for Chicago. H. Leslie Atlass, network vice president of CBS and general manager of WBBM-TTV, announced yesterday that the purchase price was $1,500,000.

An additional $1,500,000, he added, will be spent to convert the sports center at 630 McClurg ct. into the “largest enclosed TV studio center” outside Hollywood. The building is to be renamed “CBS-Chicago.”

Plan April Occupancy
While occupancy is slated for early April, WBBM-TV (channel 2), the CBS-TV outlet here, is not expected to originate programs from the site until late fall, Atlass said. 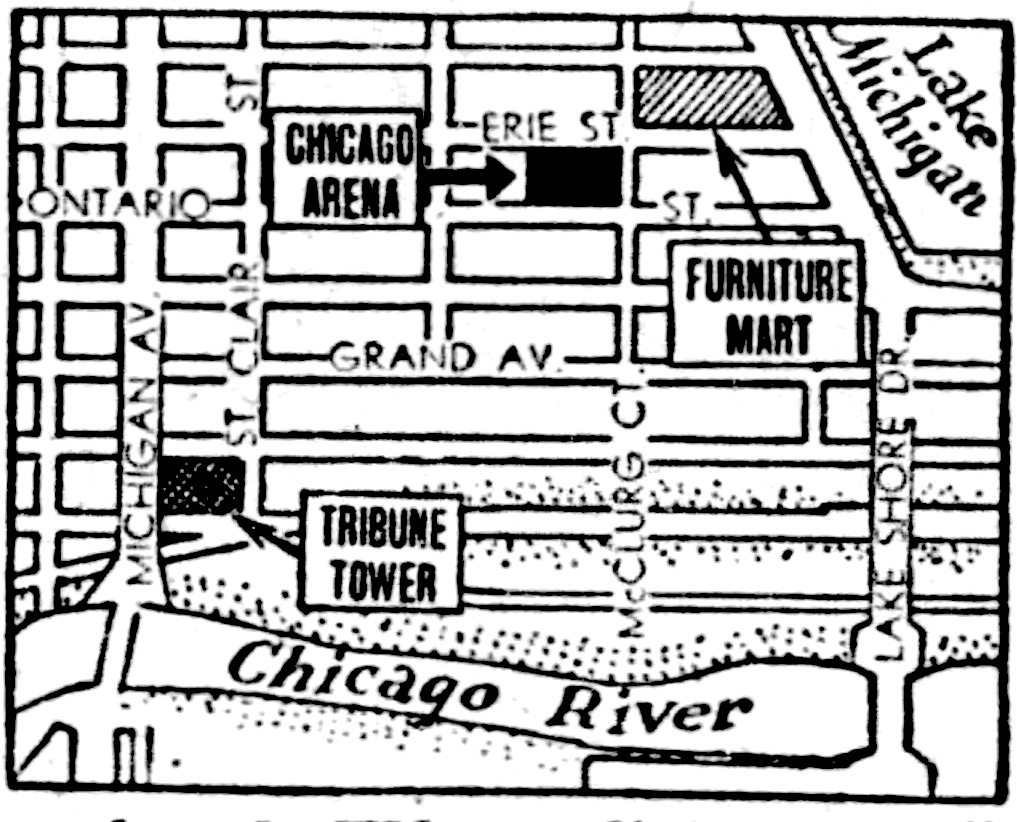 Ground Level Studios.
All studios, which will occupy 50,000 of the 87,500 square feet of available space, will be at street level to facilitate movement of stage properties. The remainder of the space will be used for scenery and maintenance shops, storage areas, and film processing facilities. Color as well as black and white programs will originate there.

Channel 2 currently stages its programs at the State-Lake building, 190 N. State st., and the Garrick theater, 64 W. Randolph st. Both sites will be vacated.

“We’ll move everything out of the State-Lake building by fall and the Garrick theater lease expires April 1,” Atlass said.

May Get N.Y. Shows.
Atlass said it is “natural” to expect that some VBS-TV programs now originating in New York City, which is critically short of studio space, will be moved here, but he did not specify shows. He disclosed CBS is planning a three hour morning program to compete with NBS-TV’s Today series, with Dave Garroway. One hour of the program will originate here, he said.

The building was erected in 1924 at a cost of $800,000 by the construction firm of Bailey and Andrews, was originally known as the Chicago Riding club. A. N. Rebori was the architect.

Col. Robert R. McCormicj, editor and publisher of The Chicago Tribune, was the club’s first president.

The Black Horse troop of the National Guard was housed at the club for several years. 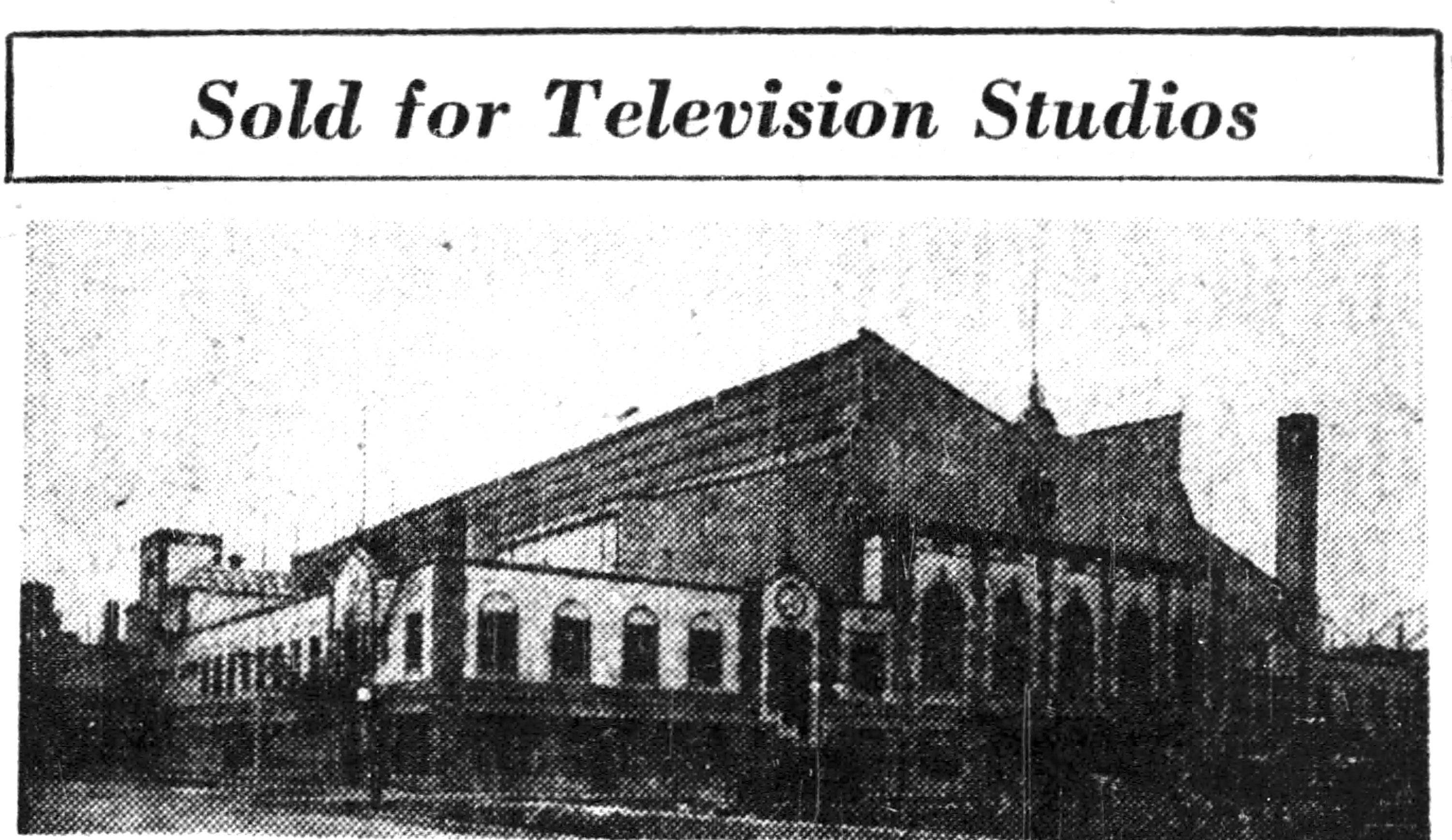 The popular Ice Capades and Ice Follies shows appeared at the Arena from 1940 until 1953; CBS took over the building in 1954.