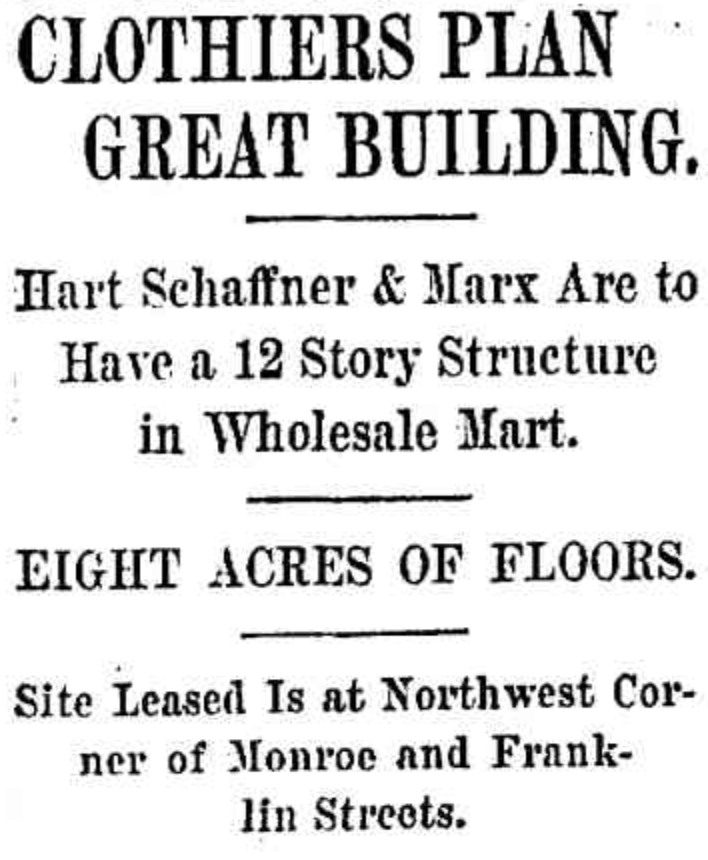 Hart, Schaffner & Marx, clothing manufacturers, closed a long term lease yesterday with Frederick Ayer of Boston, Mass., for his property at the northwest corner of Monroe and Franklin streets, and on Jan. 1 next he will construct for their occupancy a twelve story buIlding to cost $1,000,000. The cost of the land is estimated at $500,000. It is said this will be one of the largest and most perfect devoted buildings devoted to the of manufacture of clothing In the world.

The lands fronts 140 feet on Monroe street IDO on Franklin. The building, for which plans have been prepared by Architects Holabird and Rache, will cover the entire area. The exterior will be constructed of red pressed brick, and the principal entrance will be on the corner. The interior will be of steel and hollow tile. The stories will be higher than that of any other building in the wholesale or retail district. the first floor being fifteen feet high and the other floors averaging thirteen and one half in the clear.

Equipment Thoroughly Modern.
The first will contain the general and shipping rooms; the second, third and fourth floors the stockrooms, and the fifth will be devoted to a general salesroom. and above that the stories will be devoted to general manufacturing purposes. Three of the upper floors will be used solely by the cutter of clothing.

The building will be equipped with the most modern machinery for communication between the different departments, including three passenger and two freight elevators, and two spiral chutes nine feet in diameter running from the top of the building to the basement, one of which will be a double chute for the purpose of carrying express packages. Pneumatic tubes will carry orders and memoranda from one department to another.

The top floor will he devoted to the sawing room and will be lighted with a saw tooth roof skylight. In addition to being fireproof the building will be equipped with sprinklers and additional beyond the usual automatic fire alarms will be installed.

The health and convenience of the employes in addition to facilities of manufacture have been considered by Hart, Schaffner & Marx. Four floors will be made dustproof and ventilated by washed air. A refrigerating system will cool the air and sterilize and cool the drinking water. 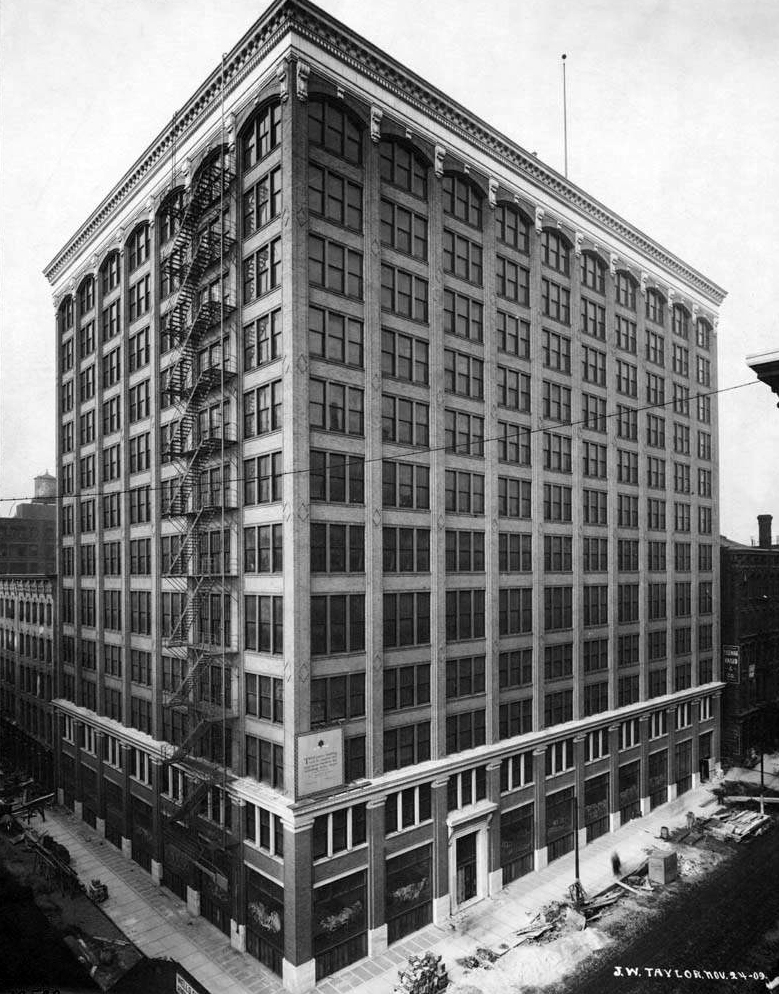 View from above street level at the end of construction.
J. W. Taylor, November, 1909

The site on which the new building will stand is now improved with a five story substantial stone building, erected by J. V. Farwell just after the fire. It is one of the city s landmarks. It is under lease for considerable periods to a large numbers of tenants, the rights of whom have been acquired. Construction will be begun on the new building on Jan. 1, 1909, with a view to to its completion before Jan. 1, 1010. The new building vill contain 350,000 square feet of floor apace, or over eight acres.

Lesing Rosenthal and K. R. Smoot looked after the legal details of the deal which was conducted by Aldis & Co. and Albert L. Strauss.

On September 22, 1910, lead by Bessie Abramowitz Hillman, 16 women struck the major Chicago garment company Hart, Schaffner, and Marx. Although wages, hours, and conditions were all bad, the final straw for the women was the imposition of a bonus system, which allowed supervisors to play favorites with some workers, as well as a cut in the piece rate of 1/4 cent.

By the end of the week, the original 16 were joined by 2,000 other women. When the United Garment Workers union (UGW) officially sanctioned the strike, 41,000 workers walked off the job. Despite this increase in strikers, many viewed the UGW’s help as too little, too late, because it refused to call a general strike, but only called workers off the job at companies without contracts, and as a result, Hart, Schaffner, and Marx was able to ship work to non-union subcontractors.

As the fall progressed, the strike increasingly looked like a lost cause. In early November, the Chicago Federation of Labor and the Women’s Trade Union League (WTUL) urged the strikers to settle, and the UGW withdrew support in December. Workers under Sidney Hillman’s leadership ratified a contract with Hart, Schaffner, and Marx that went into effect on January 14. Other workers, the most radical of the strikers, held out until February, when the general strike was called off. As many workers as could returned to their shops, but many were refused re-employment.

The Chicago strike marked the start of what became the Amalgamated Clothing Workers of America and began the career of Sidney Hillman as a labor leader. 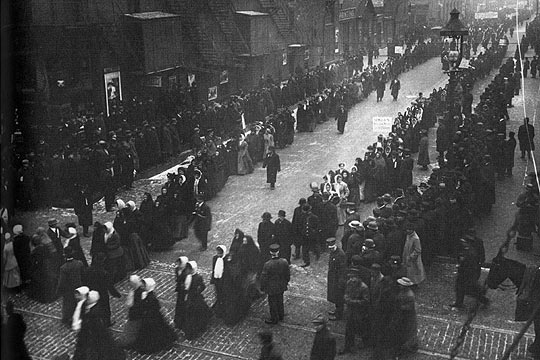 The Garment Workers’ Strike of September 1910. The Strike began in Pilsen at 18th and Halsted in shop No. 5 of Hart, Schaffner & Marx, the country’s largest clothing manufacturer. More than 20,000 men and women joined in the strike as it spread to other clothing firms throughout the city. Although the four-month strike did not result in immediate improvements in working conditions, it led to the creation of the Amalgamated Clothing Workers of America.

THE agreement that was signed on January 14, 1911, between the firm of Hart, Schaffner and Marx and the Joint Board of its employees was a simple document.

First: All the former employees of Hart, Schaffner and Marx who are now on strike shall be taken back and shall return to work within 10 days from the date hereof.

Second: There shall be no discrimination of any kind whatsoever against any of the employees of Hart, Schaffner and Marx, because they are or they are not members of the United Garment Workers of America.

Fourth: Subject to the provisions of this agreement, said arbitration committee shall take up, consider, and adjust what ever grievances, if any, the employees of Hart, Schaifner and Marx who are now on strike shall have and shall fix a method for the settlement of grievances, if any, in the future. The finding of the said committee or a majority thereof, shall be binding on both parties. 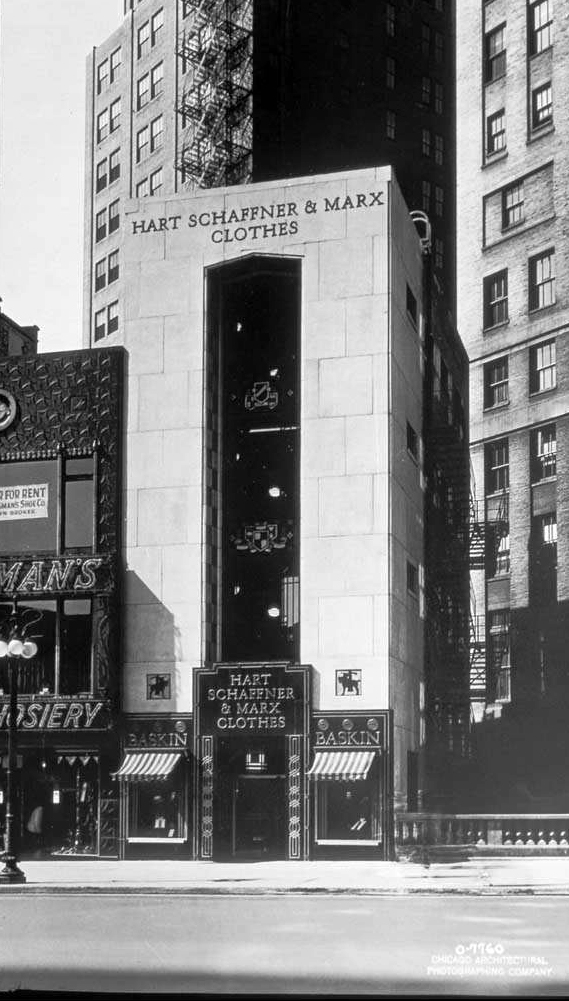