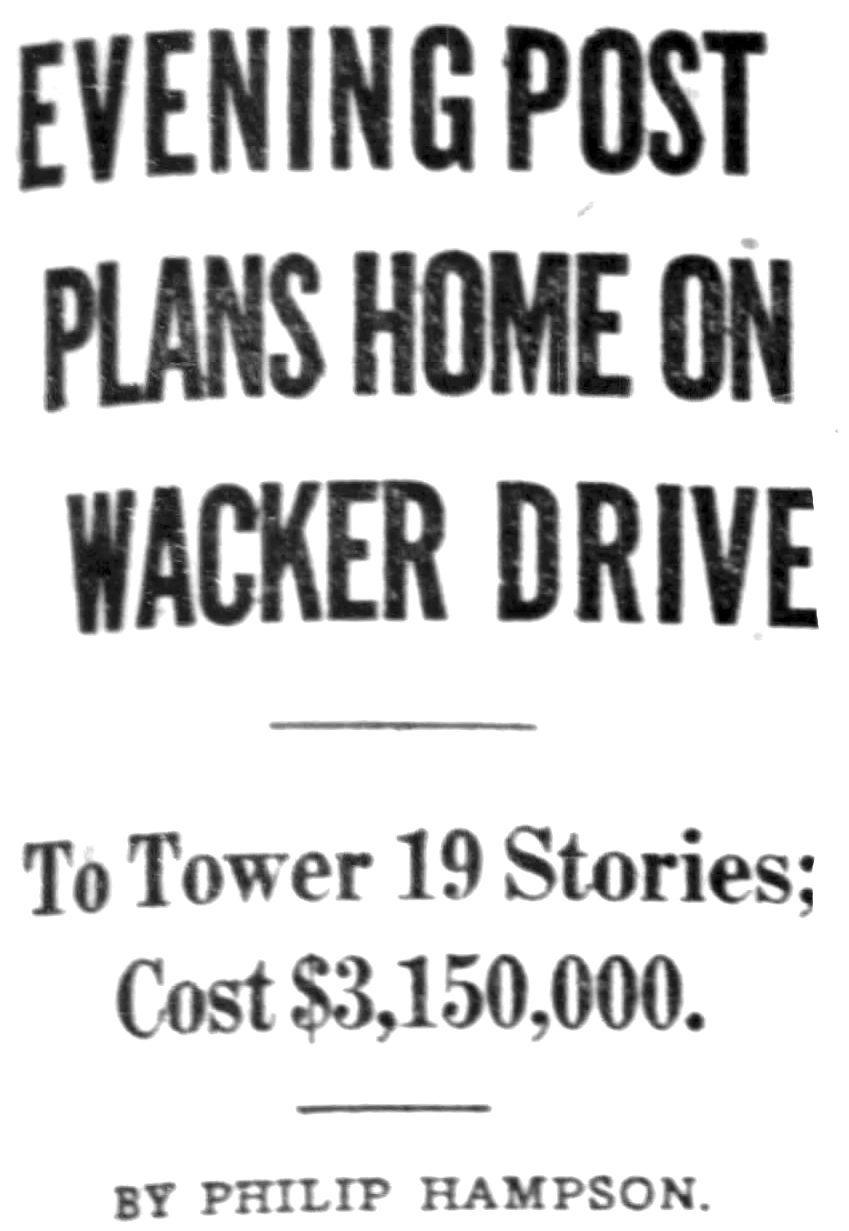 Age apparently is coming back these days. Thursday Mr. Dempsey’s thirty-two years presented Mr. Sharkey’s twenty-five with an unpleasant package. And now our most vigorous, if aged, Tribune is scoring what appears to be a scoop on our distinguished but more youthful journalistic companion, the Chicago Evening Post, by unearthing the pleasant information that the latter contemplates erecting immediately a beautiful new home at the southeast corner of Wacker drive and Fort avenue, adjoining the Engineering building now under construction at the southwest corner of Wacker and Wells.

While we understand that there still remain some i’s to be dotted and a stray t or two to be crossed, Al Chase’s friend, Sherlock Holmes of London, states that plans for the undertaking are virtually completed.

This new structure, which is to tower nineteen stories, will be one of the most attractive on Chicago’s river boulevard. Plans were prepared by Holabird & Roche, who have taken the motif fo their design from the classical Greek. In fact, the top part of the building will be suggestive of the Parthenon at Athens with a stately colonnade.

Will Cost $3,150,000.
It is understood that Carroll Shaffer, general manager of the Post, has just concluded a ninety-nine year lease with the Marshall Field estate on the building site, which fronts sixty feet on Wacker and 150 on Fort. The Marshall Field estate recently acquired the fee from Clarence Wadsworth of Middleton, Conn. It is stated that the project represent an investment of $3,150,000 on completion.

The Post is to occupy the first four floors for its own uses, while the upper ones will be rented for general office purposes. In the basement will be located the presses, which will rest on special foundations. Pedestrians wil be able to watch them in operation through windows on Fort avenue. Paper for them will be rolled into the building from the lower level on Wacker drive. Boilers and other equipment will be in a subbasement at the rear of the structure.

Both the city distribution and mailing departments will be found on the lower level of Wacker drive. 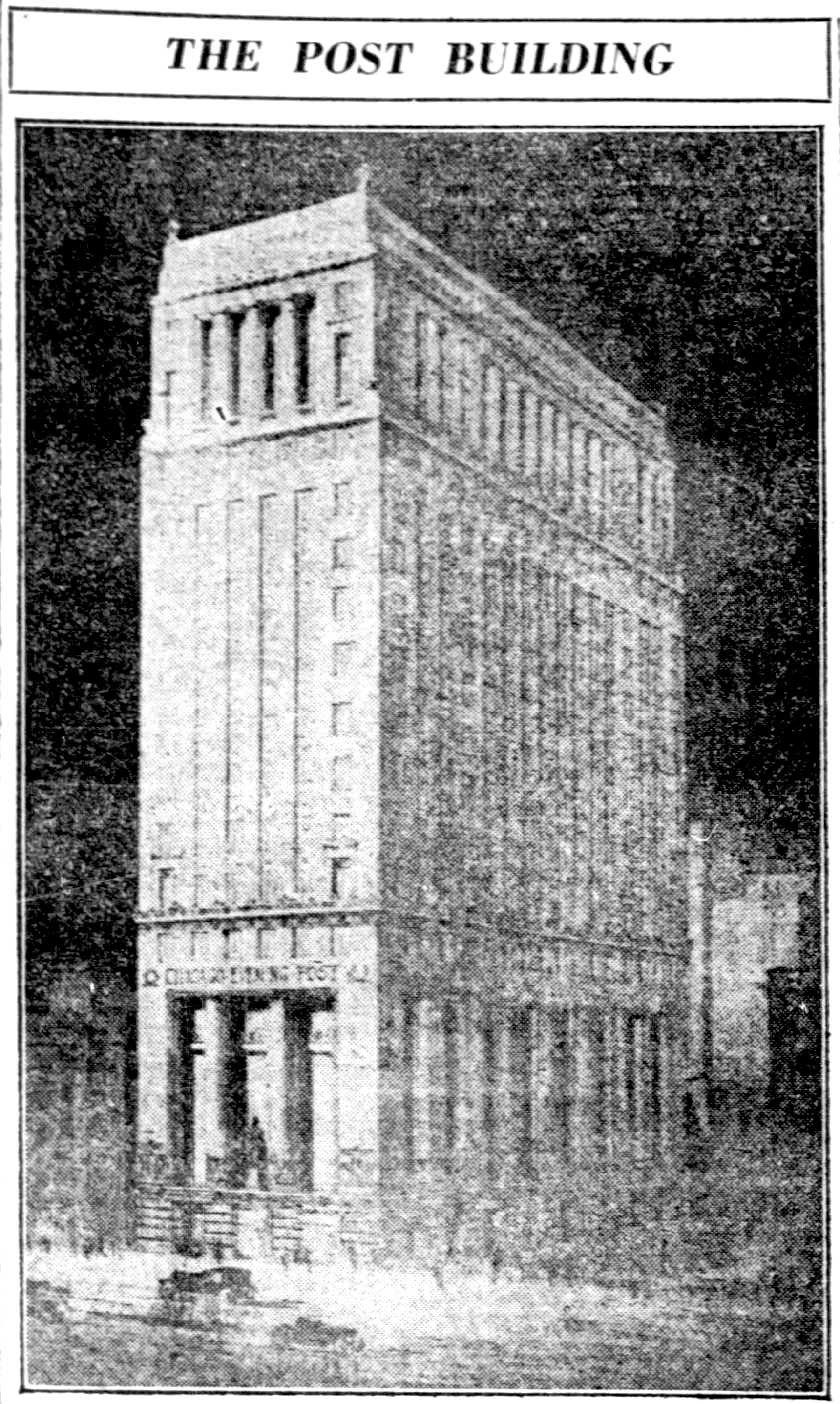 Shops on Wacker Drive.
Shops will be placed on Wacker drive upper level. The entrance and lobby will be highly ornamental. The floor and walls will be of marble and the paneling on the walls will contain paintings. An ornamental stairway will lead to the administration offices of the paper, which will be on the second floor. These offices will be finished in American walnut.

Going to the third floor, we’ll find there the mechanical departments, including the composing and stereotyping rooms, without which there wouldn’t be much of a newspaper.

Then to the fourth floor, which will provide a happy home for the editorial people and the artists. Here will be found “Riq” and Walter Washburne and Harry Hochstadter and Carleton Hackett and the others whose typewriters make the Post such pleasant reading. And then there’ll be a special office for Charlie Segner, the M. E., otherwise the Big Boss; and Charlie Morrison, who knows almost as much about newspapering as The Tribune’s own Jimmy Durkin, will have a brand new chair where he may rest if the phone ever stops ringing.

A Statue Later.
There isn’t much use going above the fourth floor, for if you’ve ever been in one of the city’s newer office buildings you know what it will look like.

A glance at the exterior again. There will be a granite base and the building will be of cut stone for the first six stories. From the seventh to the top face brick will be used, terra cotta forming a relief. At the second floor there’s to be a niche in which a statue will stand some day—whose we don’t know.

The Evening Post was founded in 1890 by the late James W. Scott. Later Herman H. Kohlsaat bought it, and in 1901 it was purchased by John C. Shaffer, present editor and publisher. Mr. Shaffer akso publishes the Indianapolis Star, Muncie Star and Terra Haute Star. Carroll Shaffer is his son.

Who’s Who in Deal.
Old buildings on the site will be razed at once, In the acquirement of the site Albert H. Wetten & Co. represented both Mr. Wardworth and the Field estate. Baird & Warner represented the Post. Contracts for construction have been let to the McLennan Construction comnpany and financing is being handled by Mosser, Willamen & Co. through Callistus S. Ennis & Co. 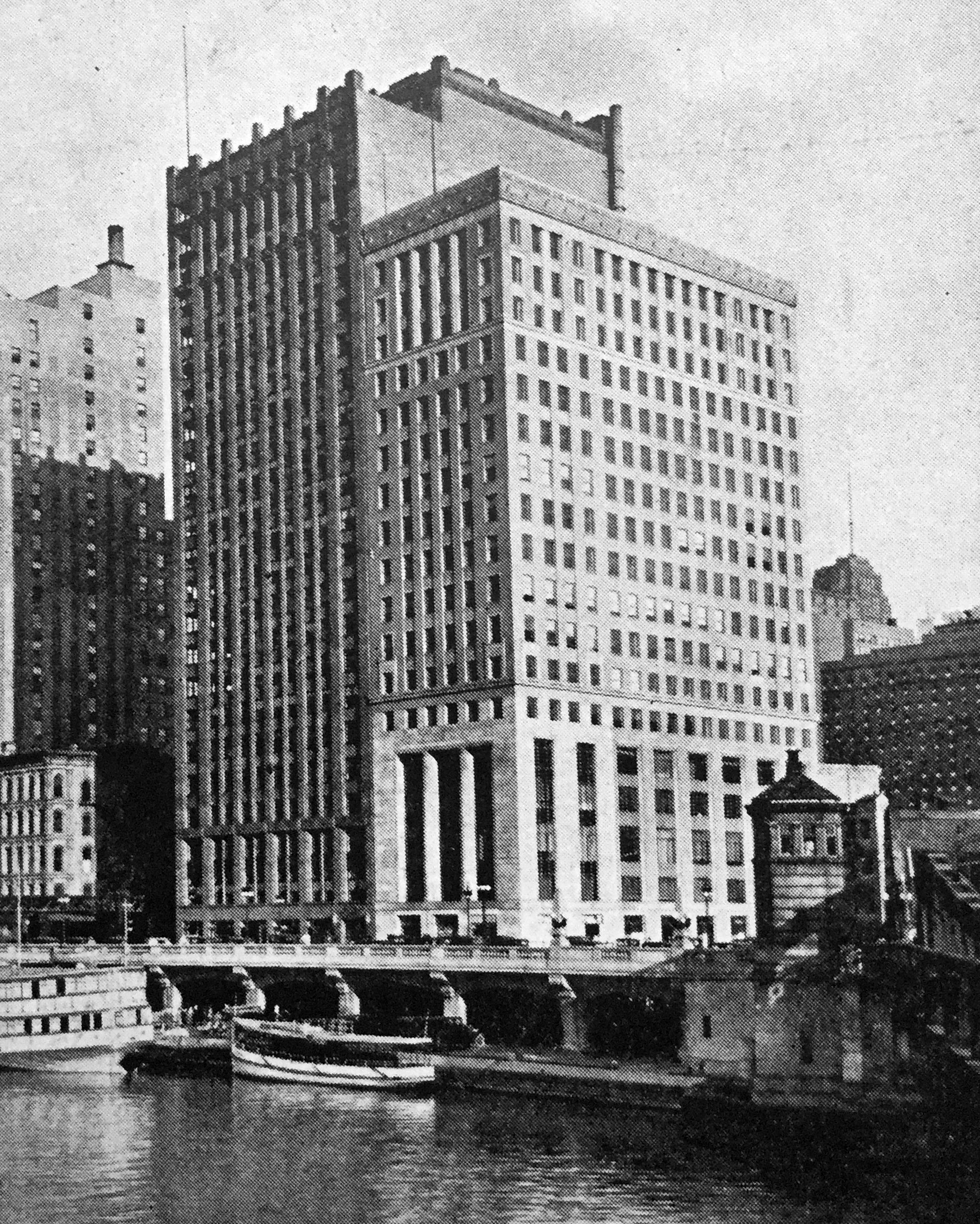 A view of the Chicago Evening Post Building at 211 W. Wacker Drive
1928 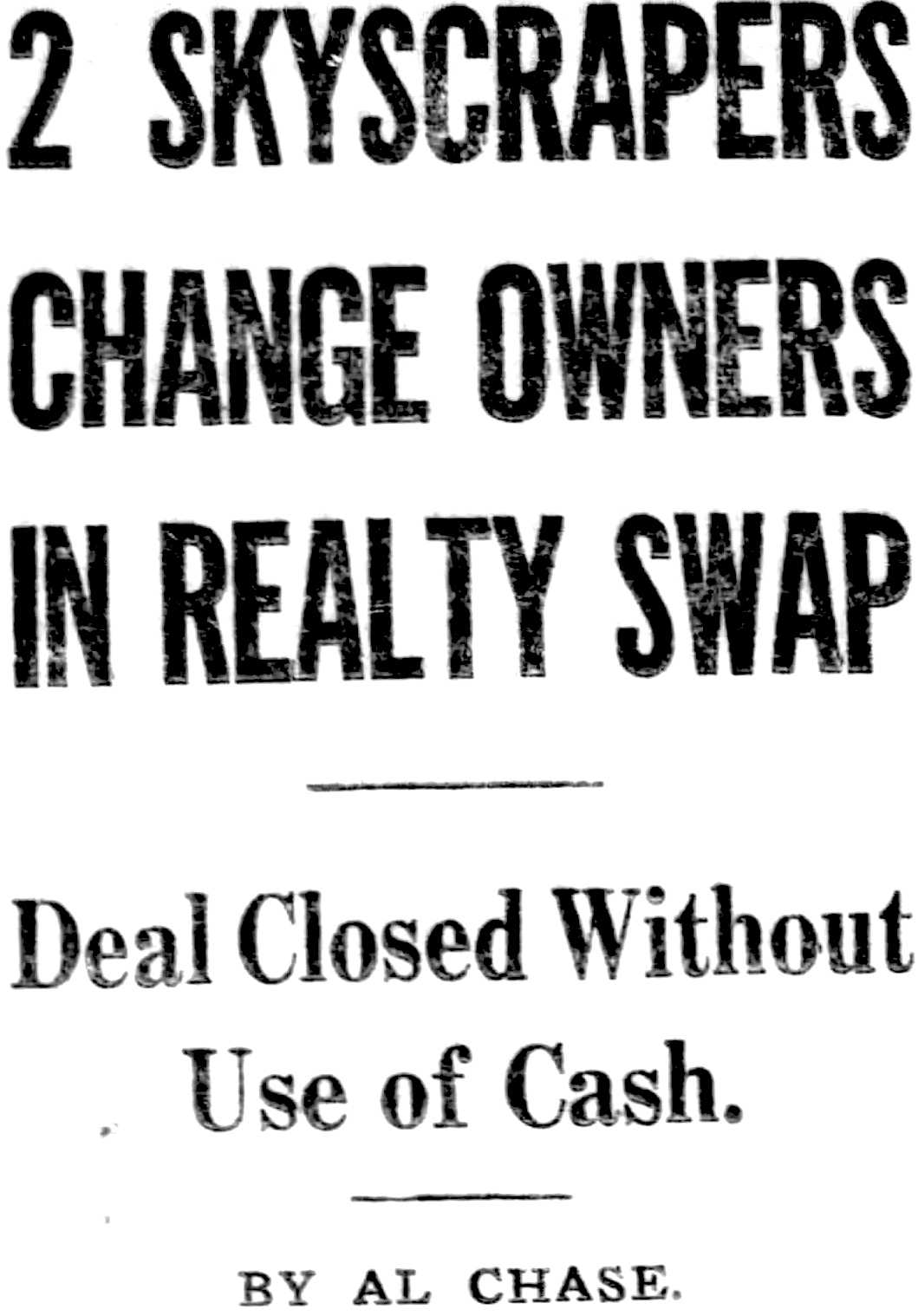 Two well known Chicago skyscraper will be swapped in one of the city’s most unusual real estate deals, as a result of negotiations concluded yesterday. Not a dollar will change hands, no brokers figured in the transaction, so no commissions will be paid, and the trade, involving a total of several million dollars in actual value of land and buildings, will have been closed in exactly twenty-seven days when actual signatures are placed on the deeds. Ordinarily a deal of this magnituse takes several months to close.

The Estate of Marshall Field is trading the nineteen story Times building, at 211 West Wacker drive, for the sixteen story Central Life Insurance company building at the southwest corner of North Michigan avenue and East Superior street. Possession of the buildings by the new owners will be taken shortly. The Central Life Insurance company, however, will not move to Wacker drive until next month, according to President Alfred MacArthur. 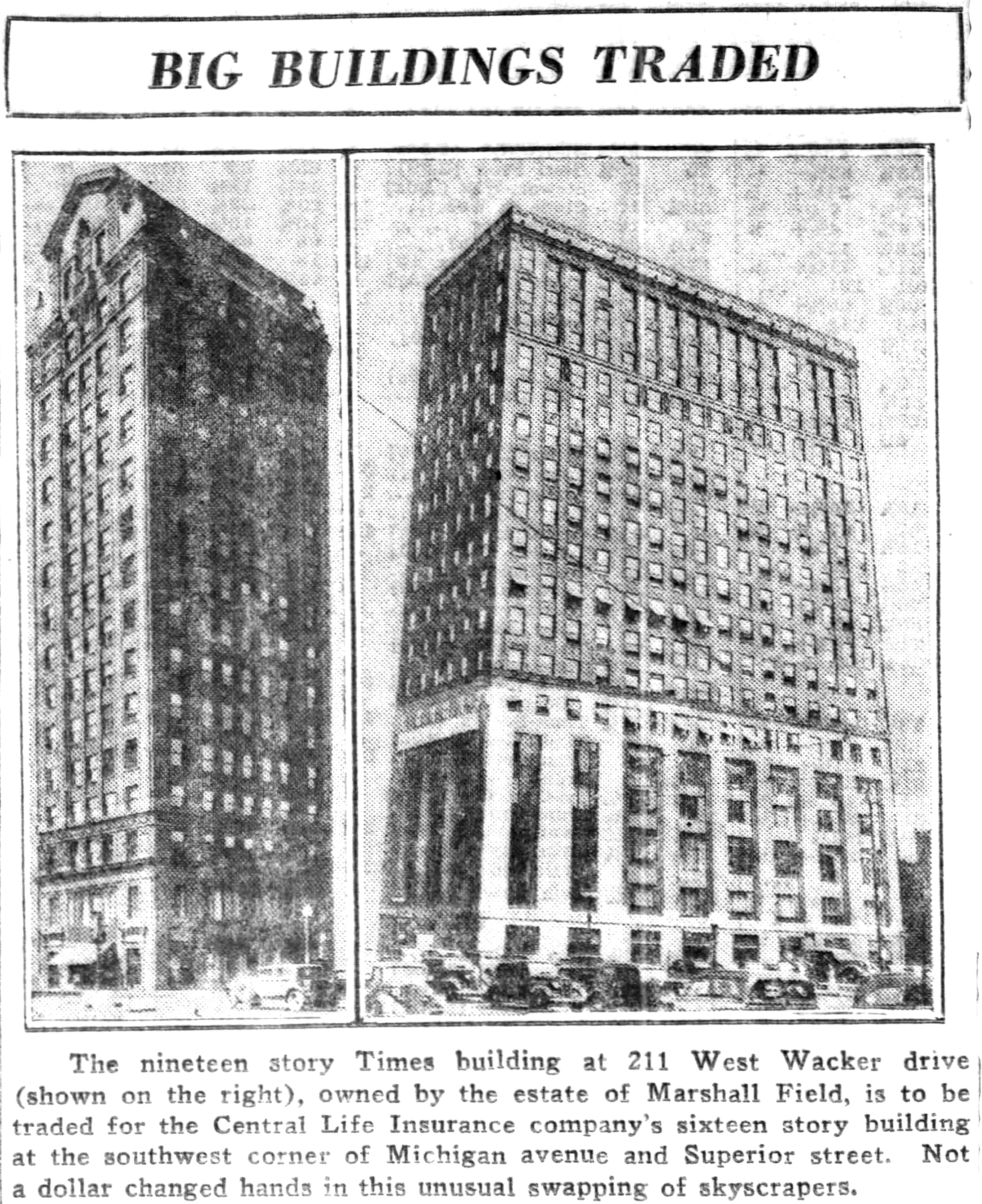 A Dollarless Deal.
Although this was entirely a “dollarless deal,” several millions are actually involved. A rough estimate shows that the Times property represents more than two million dollars in land and building and the Central Life building $1,065,000 for site and structure.

The nineteen story Times building occupies a site 60 by 150 feet, which was bought by the Field estate in July, 1927, for $615,000. The Chicago Evening Post Building corporation leased it for 99 years and erected the present building at a reported cost of approximately $1,400,000. Two months ago the Field estate took back the property, wiping out a $1,800,000 leasehold bond issue, on a court order issued because of nonpayment of ground rent.

According to Ward Farnsworth, who negotiated the skyscraper swap with the Field estate, a new fifteen year lease was made with the Times in July, specifying that the building continue its present name. It is now 55 per cent rented, the Times using nearly eight floors and two basements. The Central Life will use the 17th and 18th floors.

May Remodel Building.
There is a possibility that the Field estate may later remodel the entire sixteen story former Central Life building for exclusive use of physicians. It is to be renamed the 720 North Michigan building.

Both parties to yesterday’s deal point with satisfaction to results established through the trade. George Richardson, trustee for the Field estate, said that through the acquisition of the Central Life Property the estate has consolidated its holdings so that it now owns the entire block bounded by Michigan, Huron, Rush and Superior.1

The Field estate in June, 1934, bought the northwest corner of Michigan and Huron, adjoining the Central Life building on the south, from Mrs. Randolph Santini, formerly Mrs. Noble B. Judah, for a reported half million dollars. It is improved with the five story 700 North Michigan avenue building, erected in 1928 at a reported cost of $950,000. A month later the estate bought the northeast corner of Huron and Rush from Mrs. Santini for $103,500.

View of MacArthur.
“We have more actual bricks and mortar in the Times building than we had in our Michigan avenue building,” said President MacArthur. “In other words, we hav an actual value and the Field estate has a potential value in the Central Life Insurance building.

The Central Life building is 100 per cent rented. The insurance company has been forced to rent additional space in nearby buildings. It will be able to consolidate all its activities in its new Wacker drive building. 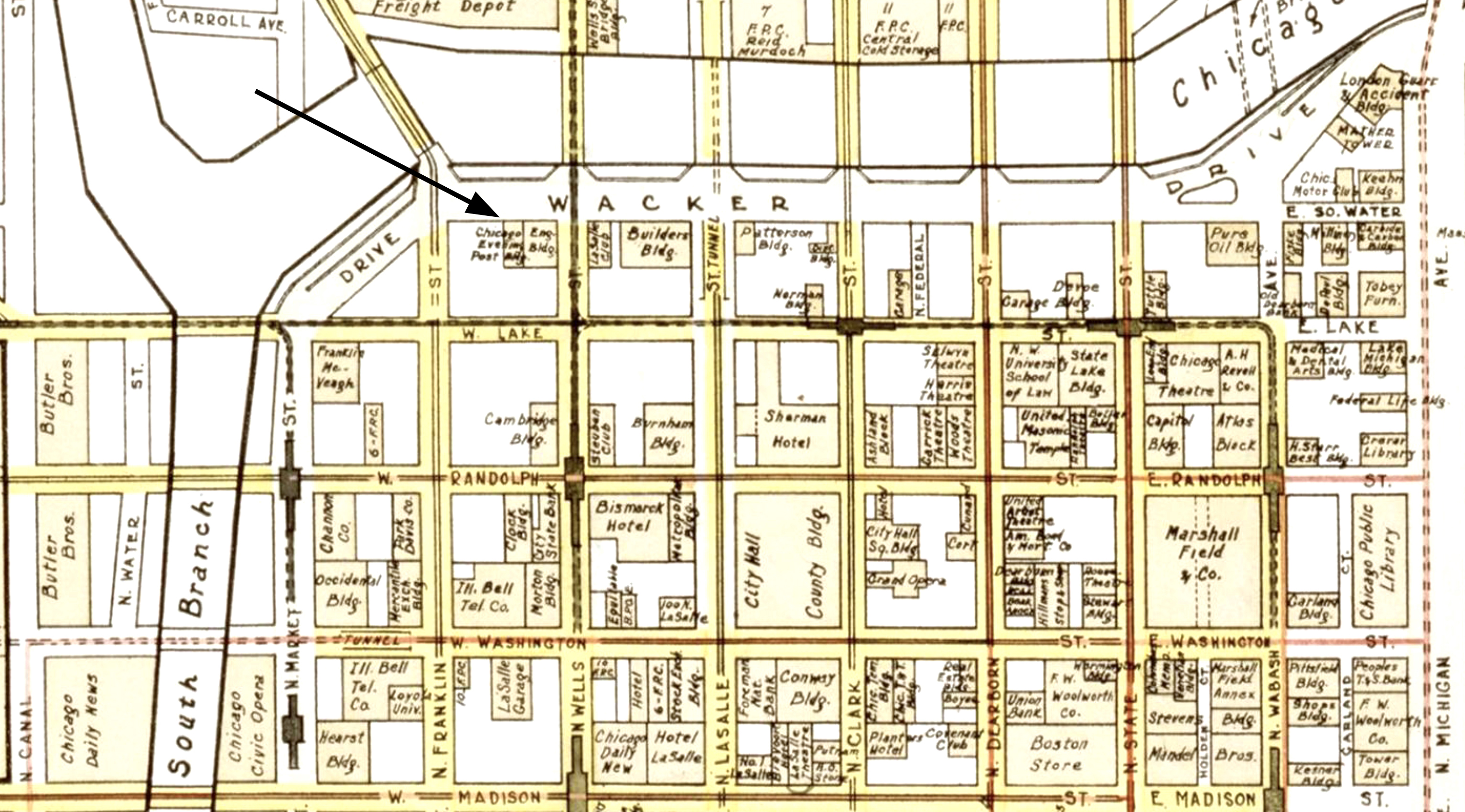 The Metropolitan Y.M.C.A., disclosed yesterday that it has purchased the 19-story building at 211 W. Wacker dr. to house the expanding Central Y.M.C.A. Community college.

Drive Is Planned.
Farwell said that within six months a 2.5 million dollar fund drive will be launched to pay for the building and allow a million dollars for remodeling.

Remodeling will begin immediately. The college is expected to occupy two basement floors and the first five floors for five years until more expansion is needed.

The first students will move this fall but the full college probably will not be moved until September, 1966, Dr. Canar estimated.

2 Degrees Are Offered.
The college offers two degrees: Associate in Arts and Associate in Business Administration. It also offers courses for students with reading, writing, or language difficulties. 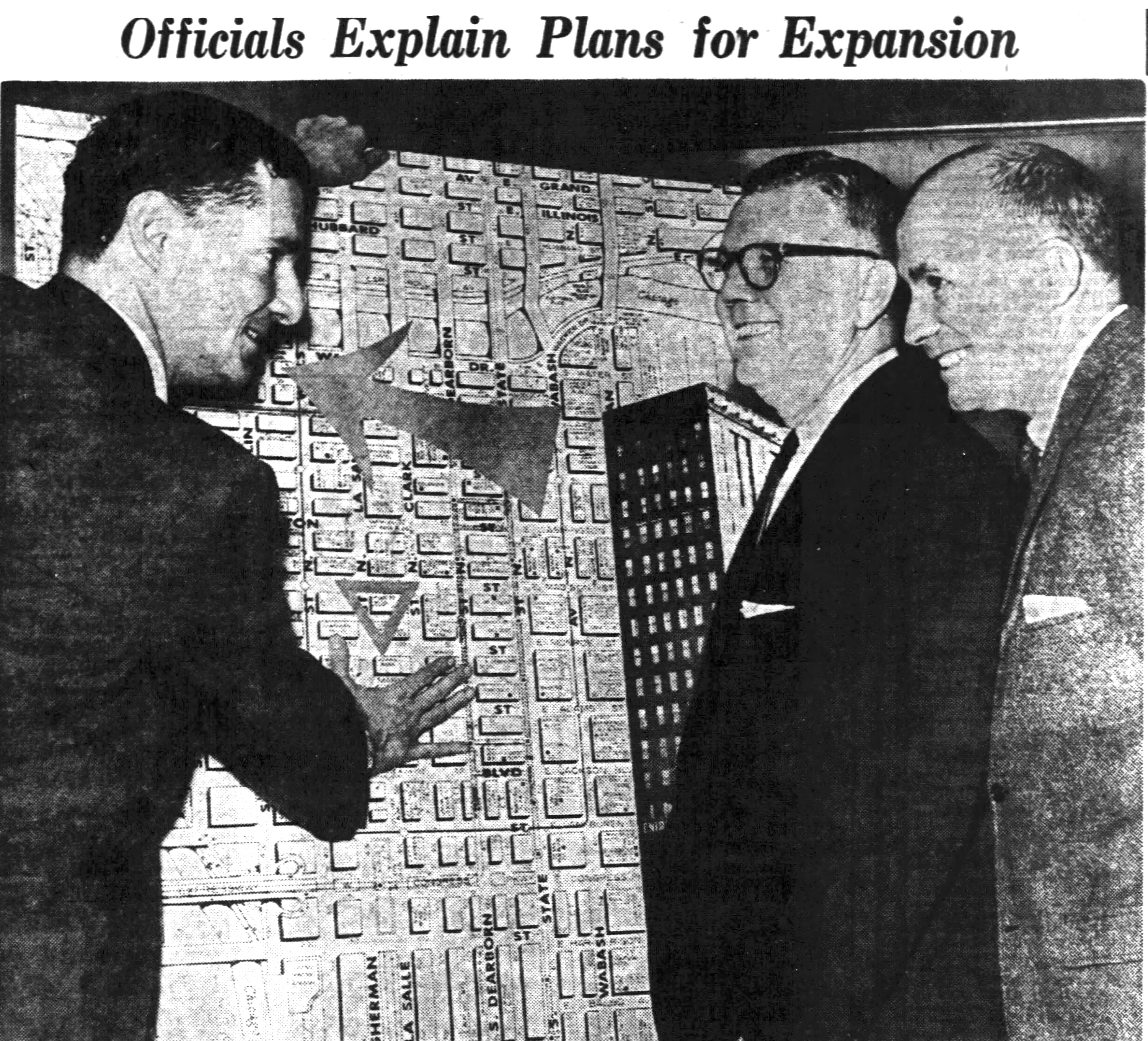 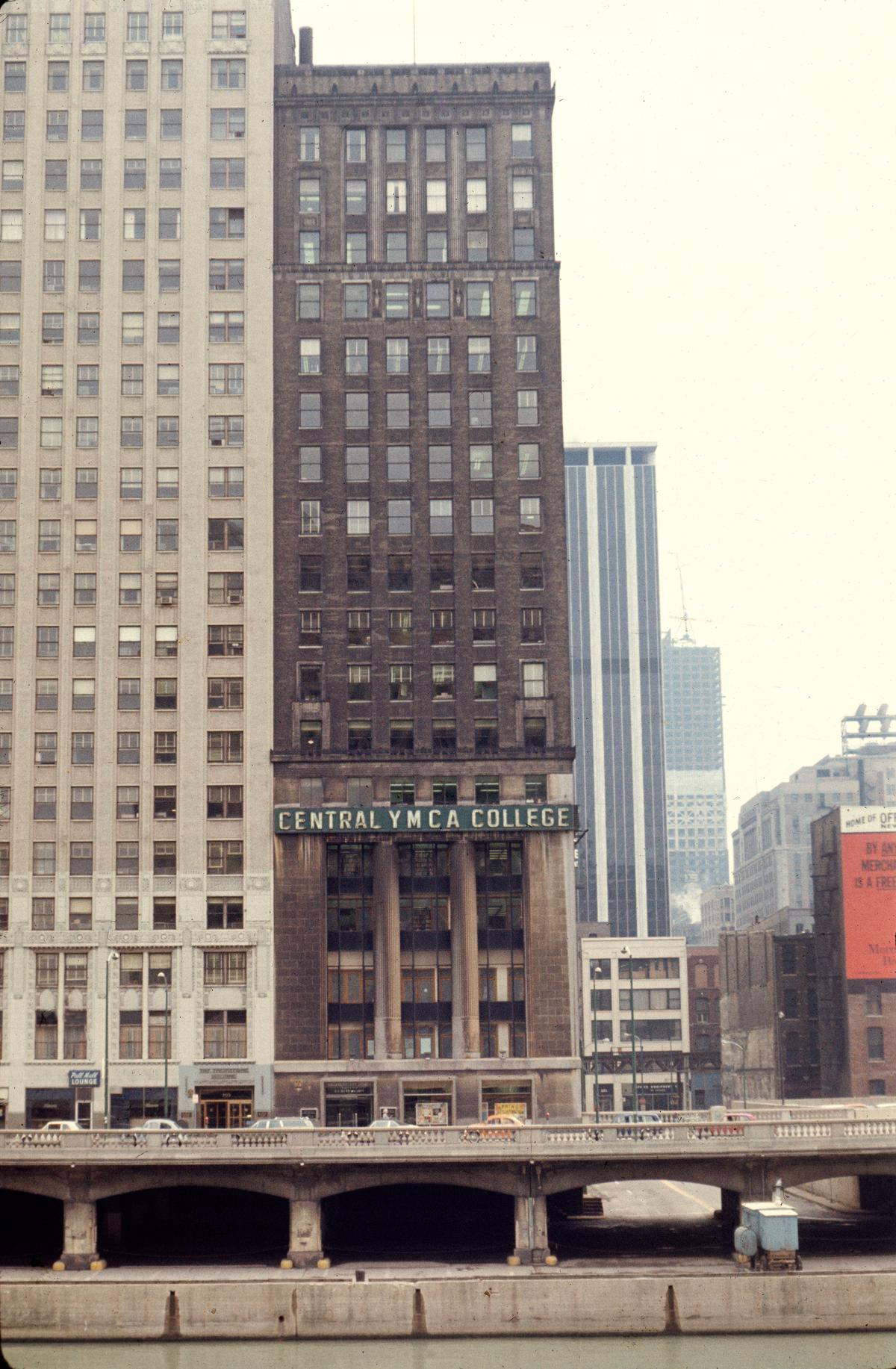 Group to buy ex-YMCA building
A group of investors composed of principals of Midwest Realty Exchange is under contract to purchase the former YMCA College building, 211 W. Wacker Dr., it has been learned. Plans call for converting the structure into a general office building. Closing on the transaction is expected by summer, according to Bert Scherb, a managing director of Midwest Realty Exchange, a Chicago real estate firm. The 19-story building, with 106,000 square feet of rentable space, is vacant. Scherb, who declined to reveal the purchase price, said his group’s plan called for $17 million in improvements, including new windows, washrooms, elevator cabs and electrical system. The remodeling program is expected to begin this summer with the first refurbished office spaces ready for occupancy by the end of the year. Rents are expected to be slightly more than $18 a square foot a year, several dollars less than what is being charged in new downtown office towers. The building is expected to house mid-sized service companies and professionals, including lawyers and accountants, Scherb said.