To Stand on Site of “Dream Castle.”

The growing business district just north of the river is to receive an acquisition in the form of a new shop and office building which it is said will be one of the most handsome of its type in the city. The building will stand at the northwest corner of Michigan boulevard and Erie street.

This corner was one of the most interesting of the near north side a few years ago, for it was here that was located the “dream castle” of Harry I. Sheldon, torn down when many of Chicago’s old landmarks were razed to put through the boulevard link. But more of Mr. Sheldon’s pathetic romance farther down. 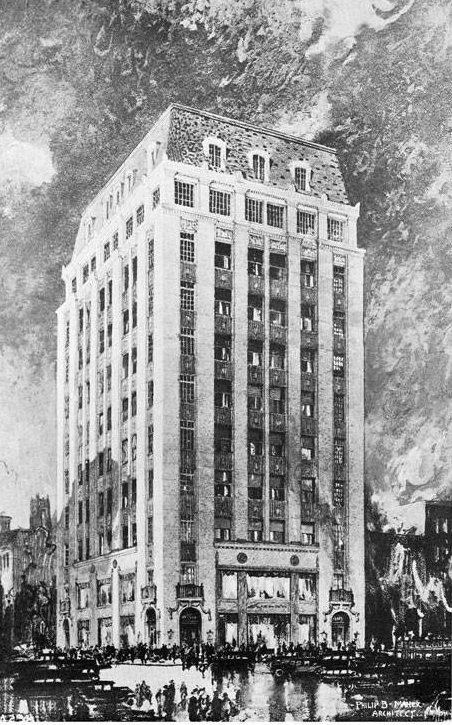 The structure will be erected by Arthur L. Farwell and it will stand nine stories high. It is to occupy the entire site, sixty feet on Michigan avenue and seventy-five feet on Erie street. The property id just south of the red brick building occupied by O’Brien’s art store.

Shops Are Feature.
Philip B. Maher is the architect. The first and second floors are planned to permit occupancy of one firm or they may each be occupied separately. And since our Michigan boulevard shops usually have articles that appeal especially to the eye, and particularly to those of the always wishful set, the show windows are to be given unusual attention. There are to be one large bay window on Michigan avenue and three smaller ones on Erie street. The first and second floor shop windows will be treated as units, making the upper one almost as desirable as the lower.

The framework of the show windows will be delicately wrought in bronze of green antique finish, while the division between sections will be of finely fluted pilasters and paneled slabs of verde antique marble.

Beauty Is Foremost.
The exterior is to be of buff Indiana limestone on the Michigan and Erie sides, but the building will not be of the shirt front variety, which is growing so unpopular in Chicago. The west and north sides will be of pressed brick of a color that will harmonize with the limestone.

And further there will be no unsightly tanks or penthouses on the roof that might mar the beauty of America’s greatest thoroughfare. These objectionable necessities are to be made an integral part of the structure.

Set Back at Top.
A feature of the structure will be a setback at the ninth floor. Buttresses are arranged in a way that will give large window space, while the windows will be of casement type. Further there will be saw tooth skylights that will furnish north light.

The ceiling on the ninth floor will be sixteen feet above the floor, and this with the novel lighting unusual effects may be obtained for shops or offices. The edge of the roof is to be of purple and black slate.

But to return for a moment to the residence of Mr. Sheldon. Many years ago this gentleman while on a tour of the world met a charming Irish girl named Nora Blake Mr. Sheldon wooed and thought himself the winner. He returned to Chicago and built for his intended bride a magnificent residence after the style of a noted old castle in her Irish home.

Came Back Alone.
The Chicagoan went to Ireland to claim the girl—but he came back alone; why, no one but himself ever knew. And so he lived in his “dream castle” for years with a sister and his memories until he could no longer bear the strain, so the story goes. He and his sister moved, and the house stood vacant for some time, nut the vacancy permitted Johnnie and Roberta and all the other children of the neighborhood to gather on the steps and let their imaginations run wild with fanciful tales about the romance.

Mr. Farwell, leased the home in 1913 for use as a furniture shop. This new project will represent an investment, with land and building, of about $1,000,000 it is said. Frederick M. Bowes of the Bowes Realty company will have charge of the renting of the building. 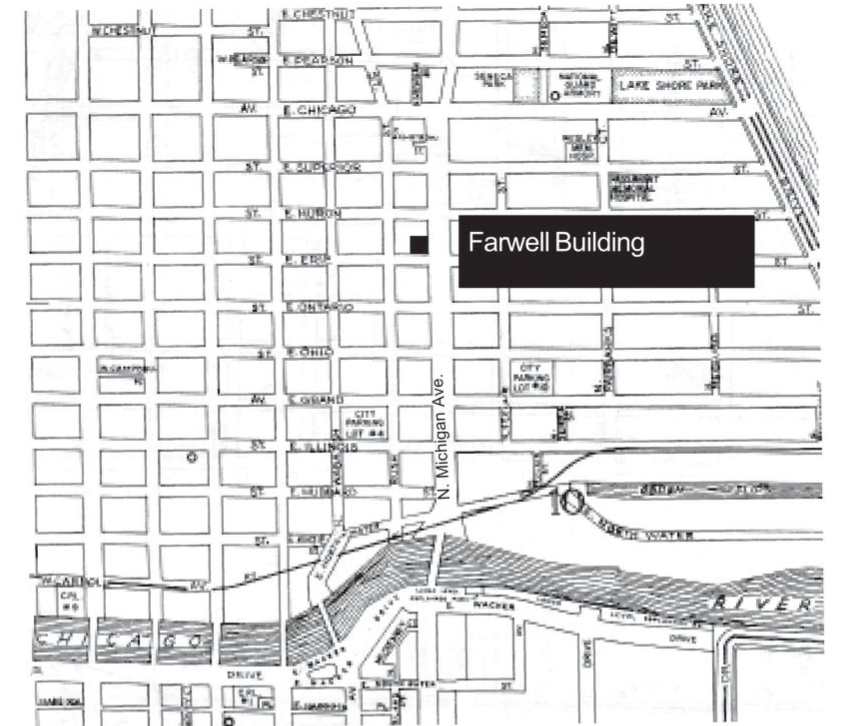 Epilog
Originally built as a speculative office building, the building was purchased in 1987 by the Terra Foundation to house its art museum. The Farwell Building was granted city landmark status in early 2004.