CHICAGO MOTOR CLUB building, at 66 E. South Water street (68 E. Wacker Place), was built in 1929. Holabird & Root were the architects and Frank E. Brown the engineer. The building is 17 stories high, with two basements, on rock caissons. The original head- quarters of the Chicago Motor Club was located in the New Southern Hotel at Michigan and 13th avenues. The club for many years occupied the old Cudahy mansion at Thirty-third Street and Michigan Avenue, but with its membership at over fifty thousand, it found these quarters too small and erected this beautiful new home.

The building is located on the north side of E. Wacker Place, between N. Michigan Avenue and E. Wacker Drive. 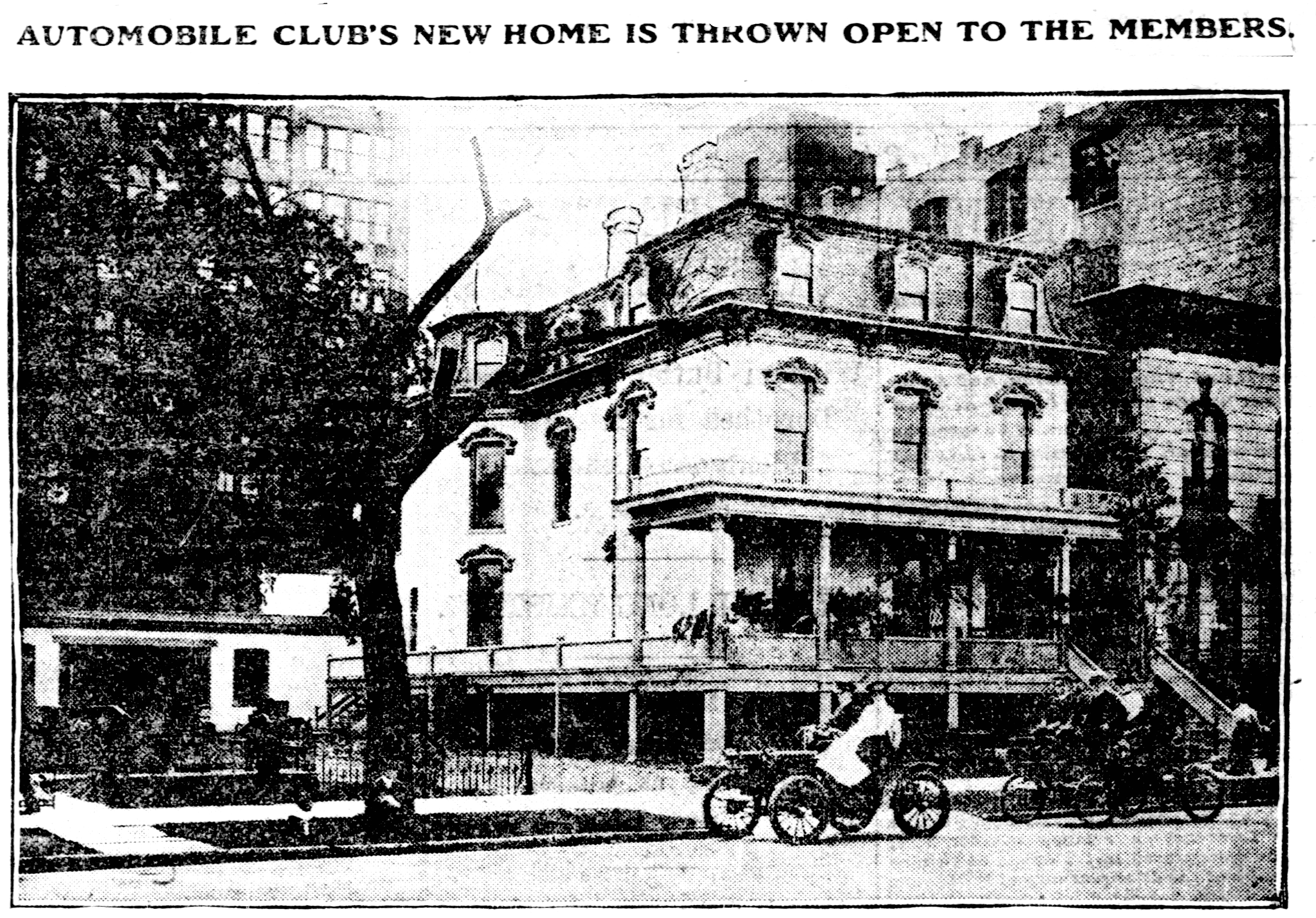 Members of the Chicago Automobile club turned their machines toward 243 Michigan avenue yesterday to inspect the new clubhouse. which was thrown open during the day. This morning there will be a country run in celebration of the event, and a large number of automobilists will assemble the clubhouse for the start.

A double driveway along the south side of the house leads into the garage, which is another way to say “auto barn.” This building has stall room for thirty machines, and appliances for charging vehicles with gasoline or electricity. A barn in the rear is to be fitted up as a repair shop. Moreover, the repairman will answer telephone calls and take out a powerful machine to tow disabled autos back to the
club.

The club has 115 members, and they own about 175 autos of different kinds. The , resident is F. C. Donald and the secretary is W. L. Githers. Frank X. Mudd is treasurer and chairman of the House committee. At a recent meeting of the club the members, regretting the reckless driving that has been done by some automobilists, adopted a resolution saying:

Resolved. That Chicago Automobile club tender to the municipal and park authorities its moral and material support and assistance in enforcing the regulations and limitations governing the use of motor vehicles in the streets, boulevards, and park-wars of the City of Chicago. 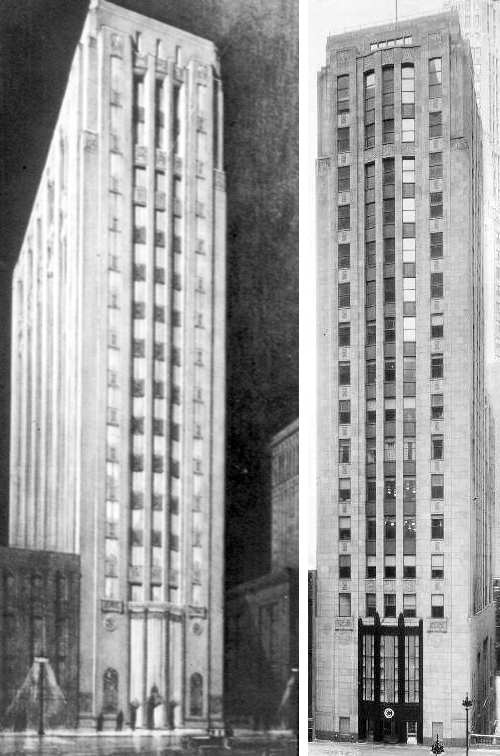 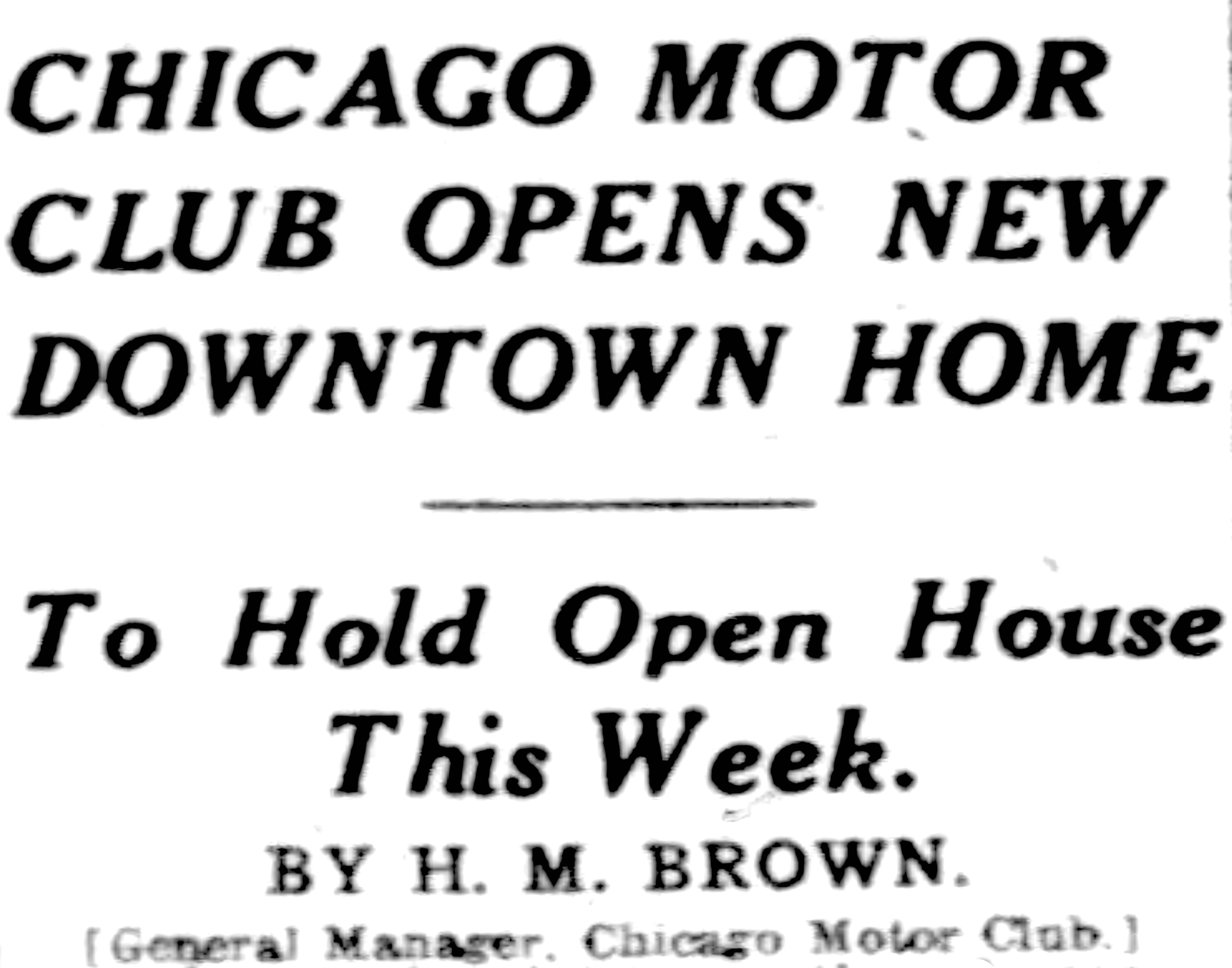 After nearly eight months of record breaking building progress, the Chicago Motor Club in its new seventeen story headquarters at 66 East South Water street today extends an open invitation to the general public for this week.

Last week was open house week for members. Officials of the American Automobile association, with which the Chicago Motor Club it affiliated, and heads of major clubs throughout the country were among those who, with members, viewed the building during that period.

The officials of the club believe that the new building is far more than just another new structure. Not only is it the first office building in Chicago to embody the “art moderne” theme, but the builders asserted that never before has a modern building, 250 feet high and resting on bed rock, been erected in the short period of 234 days, which also included razing of the old building on the site. 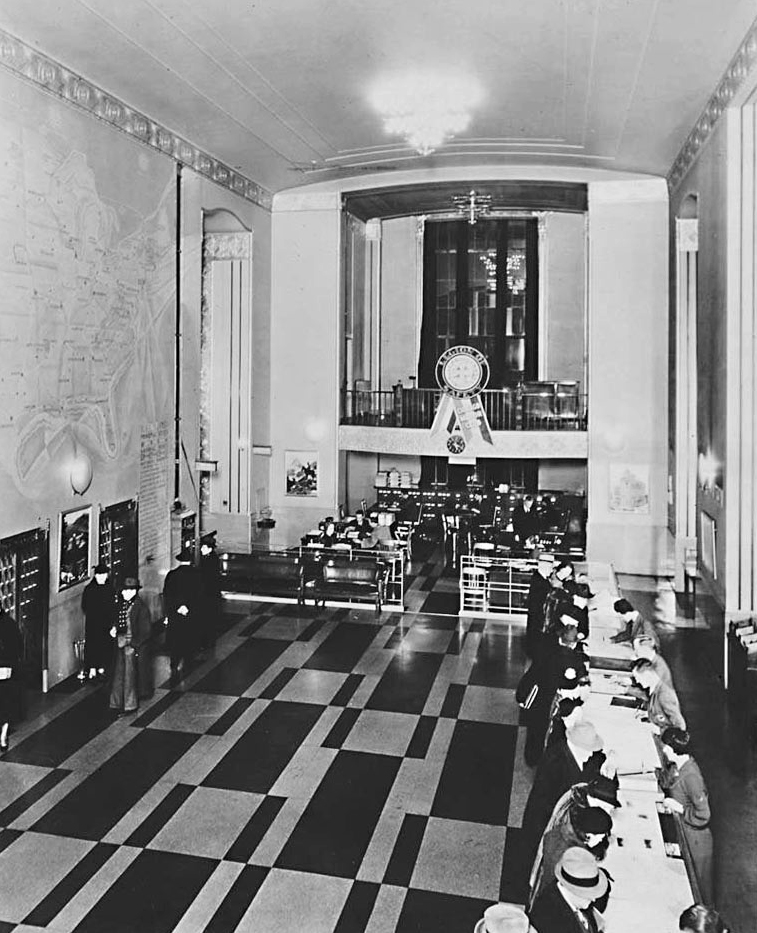 The Chicago Motor Club Building
Lobby, the John Norton mural can be seen on the left

Tour Bureau Unique.
When wrecking began on May 1, other builders declared the new structure could never be finished by December 20, the date promised, but it was. Nothing was skimped, either.

The touring bureau is unique, surpassing any other like it in any automobile club in the world. It particularly typifies the art moderne trend, occupying the entire first floor, without pillars or posts, and is thirty feet high. The decorative scheme is light gray, trimmed with silver and light green. The lighting system is four clusters, each comprising fourteen large disks of frosted glass, suspended from the ceiling. Bulbs are placed just above each disk. The same motif is seen in the lighting fixtures in the five large bays, and in the small wall lights.

The east wall is marked by three large windows, extending from floor to ceiling. On the west wall is painted a map of the United States. It was executed in modernistic style by John Norton, widely known Chicago mural decorator. The size is nineteen by twenty-nine feet. On it are portrayed nineteen transcontinental highways, together with the various mountain ranges and national parks. 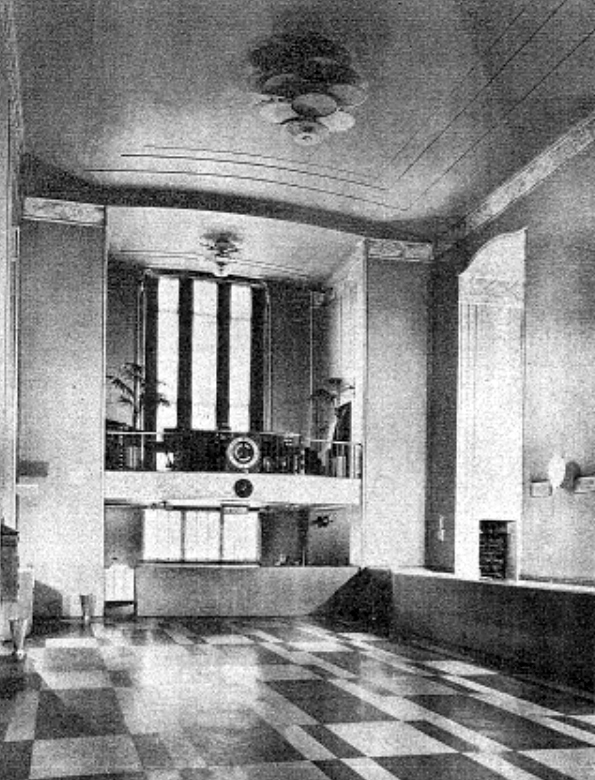 The Chicago Motor Club Building
A view of the lobby looking north.
1930

Front Is Bedford Stone.
The front of the building is Bedford stone. The structure itself is built of steel with tile arches and surfacings of concrete. It rises 260 feet above the upper level of South Water street.

The first seven floors of the structure are occupied by the club and the Inter-Insurance Exchange.

The removal of the club to East South Water street marks the first time in twenty-three years’ existence of the club that it is located elsewhere than in Michigan avenue, or Automobile row. Organized in 1906 with a comparatively small membership, the club today numbers nearly 80,000 members.

United States Map (1928)
Above the elevators is a large-scale mural, entitled United States Map (1928), by important Chicago artist John Warner Norton. In its celebration of the American road trip, Norton’s United States Map exemplifies the function of the Chicago Motor Club’s travel bureau and is an integral feature of the building’s elegant Art Deco lobby. The nineteen by twenty-nine-foot mural occupies the west wall of the triple-height space. Land masses are depicted as flat planes of pale gray and tan surrounded by bodies of water rendered with cubist patterns in pale green and blue. Cities are marked as deep-orange rectangles connected by a network of light-gray lines representing the major national highways of the time. Other geographic features are reduced to simple geometric shapes, such as the chevrons representing mountain ranges and the squares which depict national parks.

The work was painted on three sections of canvas in Norton’s studio at Tree Studios (601-623 N. State Street) and adhered to the plaster wall surface with white lead. Consistent with his love of travel, Norton had an appreciation for cartography, and the Chicago Motor Club mural is one of three map-based murals he completed. The other examples are a map depicting the exploration of North America by Jesuit missionaries (1930) at the Cudahy Library at Loyola University in Chicago and a series of global map murals (1932) at Hurley Hall at the University of Notre Dame in Indiana.

The Chicago Motor Club established its affiliation with national motoring club, the American Automobile Association (AAA), in 1914 and functioned as an independent motor club into the 1980s. The club, now known as the AAA-Chicago Motor Club, continues to serve motorists as a local branch of this important national organization. AAA was established in Chicago in 1902 through a union of nine motor clubs. Today the AAA is a not-for-profit organization compromised of a federation of 51 independently operated motor clubs throughout North America with a total membership of more than 51 million.