CHICAGO DAILY NEWS building, at 400 W. Madison street, occupying the block bounded by W. Washington, N. Canal, and W. Madison streets and the Chicago river, was completed in 1929 and dedicated on 8 July 1929. Holabird & Roche (changed to Holabird & Root in 1927) were the architects and Frank E. Brown the engineer. The building is 26 stories high, with three basements, on rock caissons. They used to be located in the Chicago Daily News Building at 15 N. Wells St. 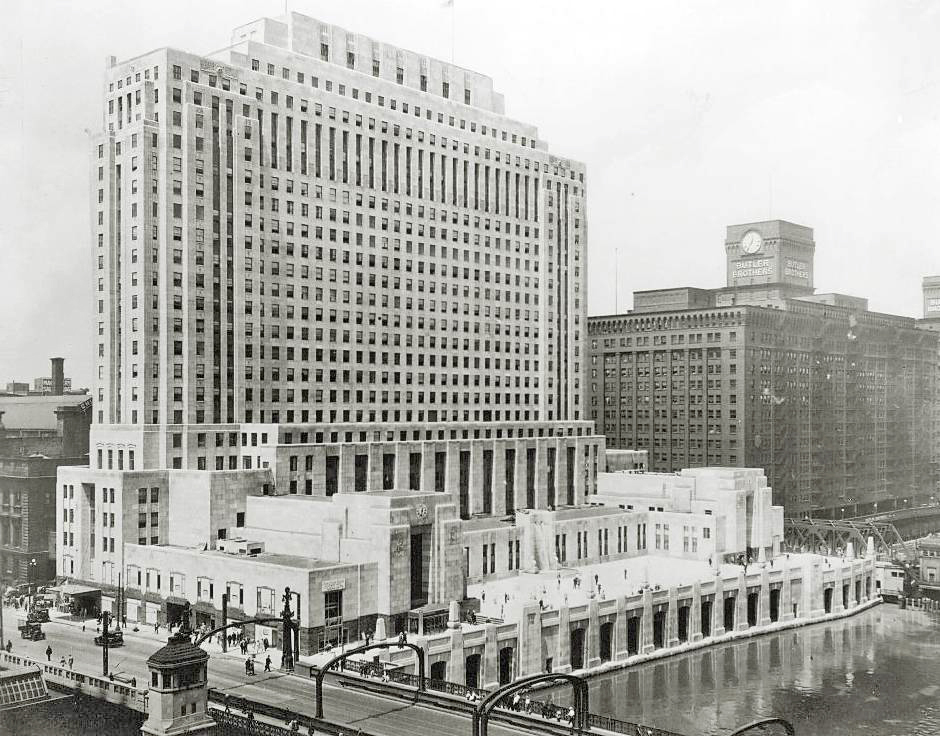 Commendation for the courage and integrity of Melville E. Stone and Victor Lawson, its founders, and for its fifty-four years of public service was given the Chicago Daily News yesterday afternoon at the formal dedication of that newspaper’s new building, extending from Madison to Washington streets, on the west bank of the river directly opposite the new civic opera building.

There were speeches by William Allen White, Kansas’ editor and author; by Rufus C. Dawes, banker, and by Walter A. Strong, publisher of the News. President Hoover sent a message of congratulation, which was read over the radio from Washington by Robert P. Lamont, secretary of commerce. Mr. Lamont then expressed his own congratulations to the editors and publishers, and the President pulled a switch which started the newspaper’s presses.

There are forty million newspapers sold in the United States every day. Seventy-five percent of those who read, read nothing but newspapers. A much higher percentage spend 90 percent of their reading time on the newspapers. Surely this is a serious responsibility for the newspaper man with a conscience.

The ceremonies were held on the Daily News Plaza, a wide concrete terrace along the riverside, the center of which was adorned by a fountain to be known as Victor Lawson memorial fountain, and the voices of the speakers mingled with the rattle of the air hammers high overhead on the other side of the river, where the steel workers are completing the opera building. 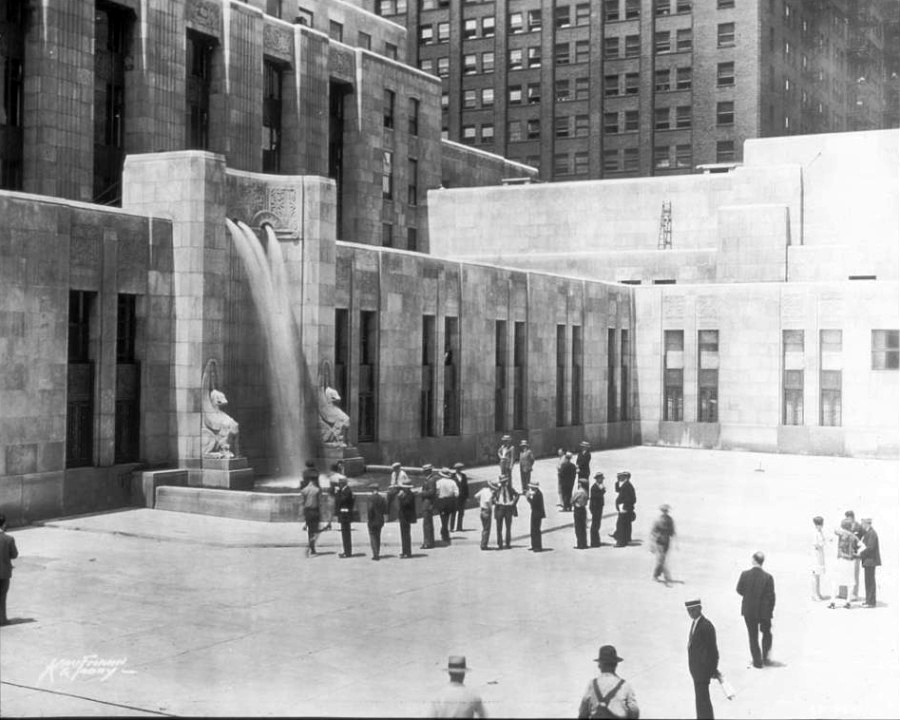 Sees Development of Air Rights
President Hoover in his message to the newspaper said:

I congratulate the Chicago Daily News on its splendid new building and the 54 years of distinguished public service which made it possible.

I congratulate Chicago on the fact that one of its great institutions has made such an important contribution to the beauty of the city and by establishing the principle of air rights construction opened the way to a greater development of its business and commercial resources.

Mr. Dawes talked of the late founders of the great newspaper:

Melville Stone and Victor Lawson both came to Chicago from small towns. Both were men of character, religious conviction, and courage. The story of their lives is an epic of the middle west and should be an inspiration to every young man. 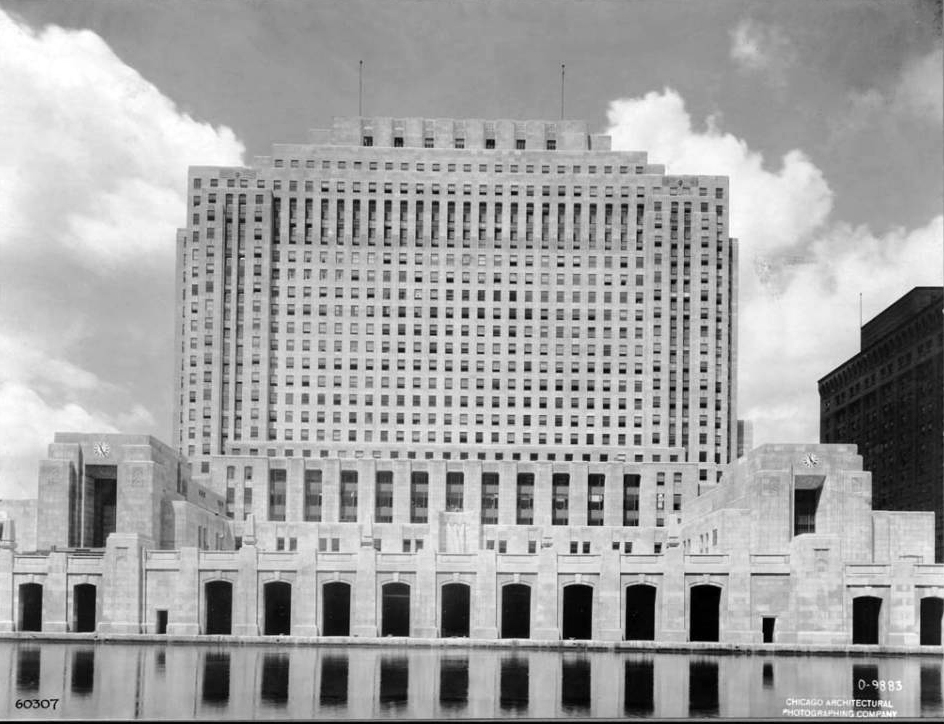 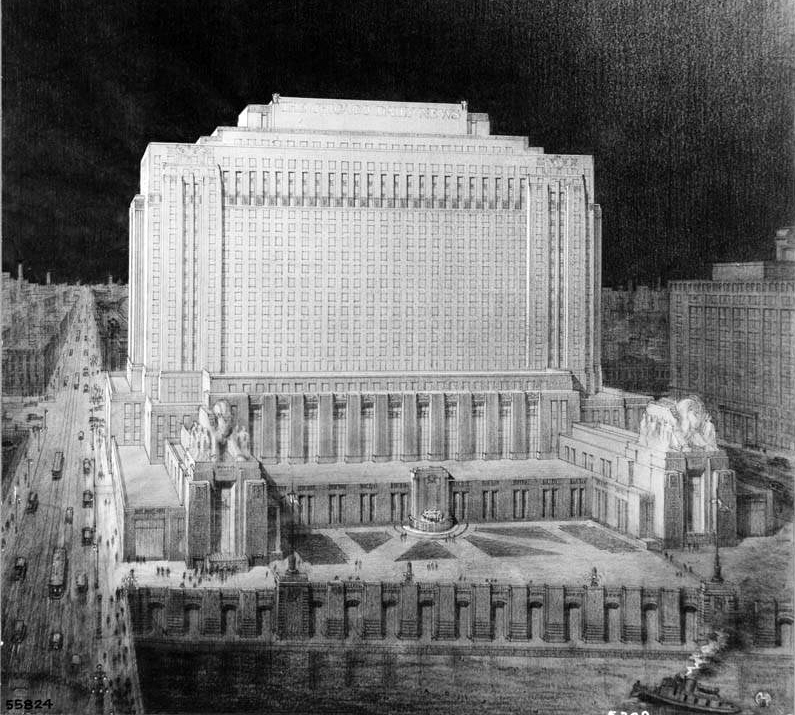 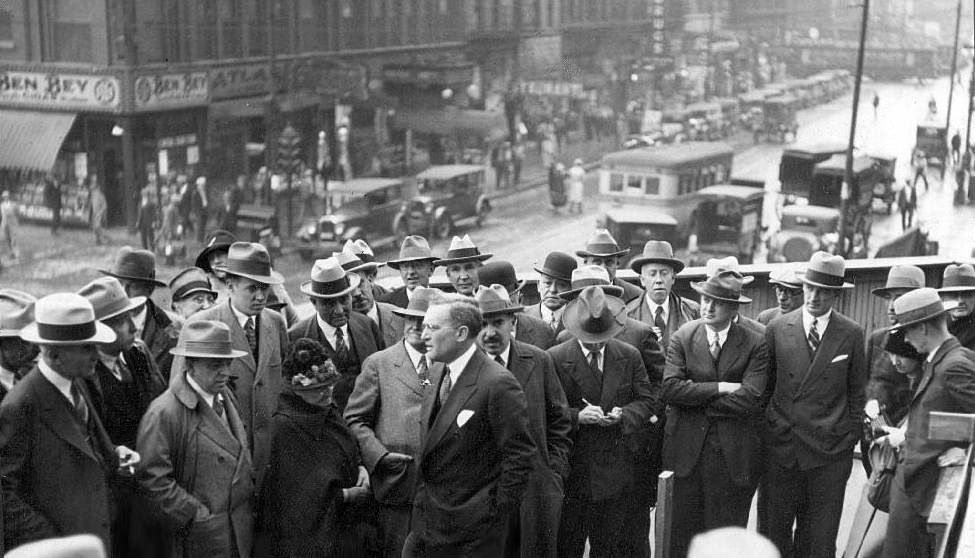 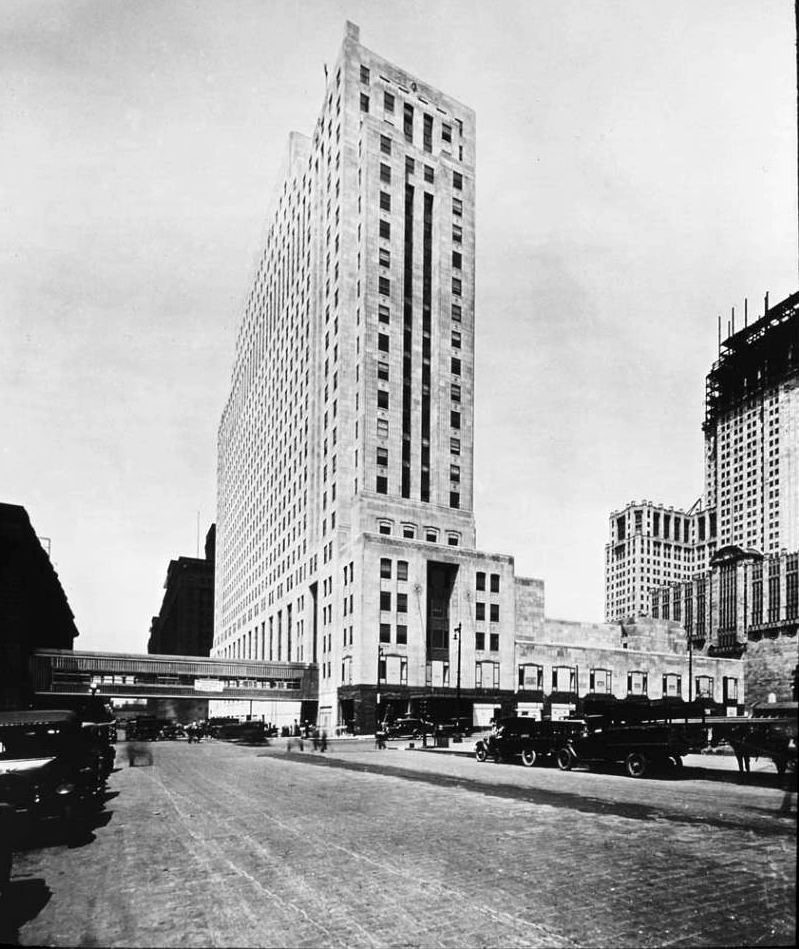 A new kind of mural painting, born of the symbols of modern life and the magnitude of modern building….There, on the ceiling of a thoroughfare 180 feet long, will be read the romance of the modern newspaper ingeniously told by multifarious shapes and symbols–animate and mechanistic. Rhythmic teamwork of man and machine that makes the modern newspaper possible and the paraphernalia of news-gathering that has shrunk the globe into one neighborhood. 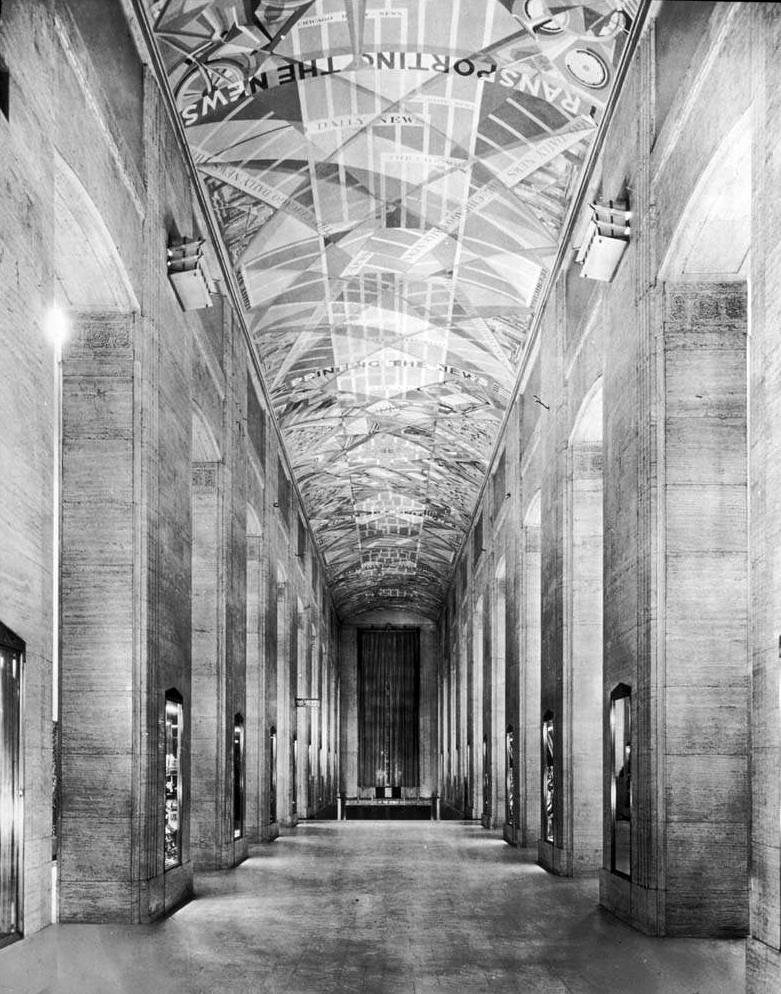 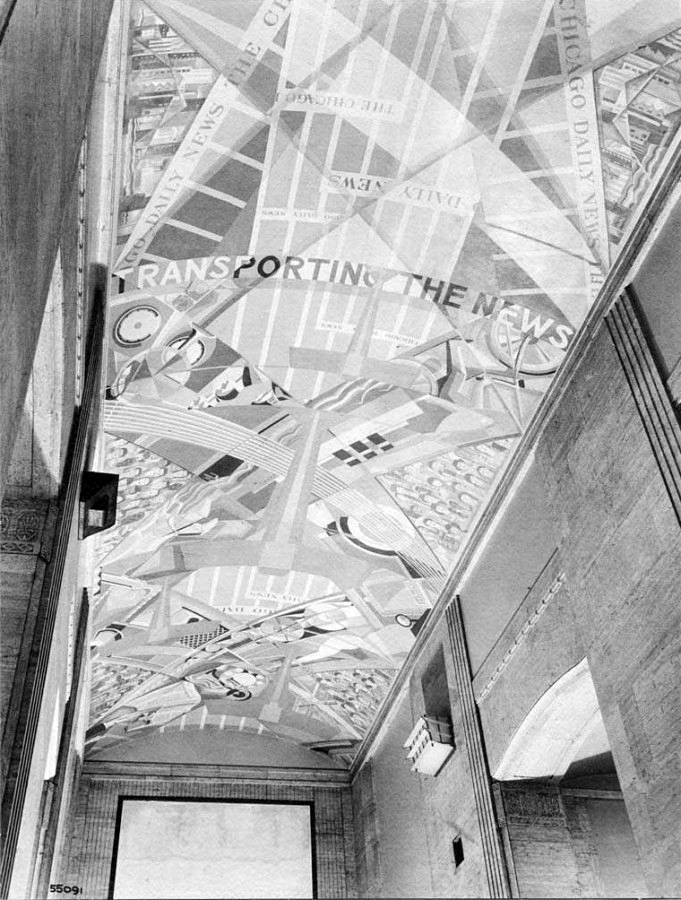 Ceiling of the grand concourse leading to Northwestern Railway Station featuring the mural by John Warner Norton and as it looked when originally installed.

Color scheme of the mural 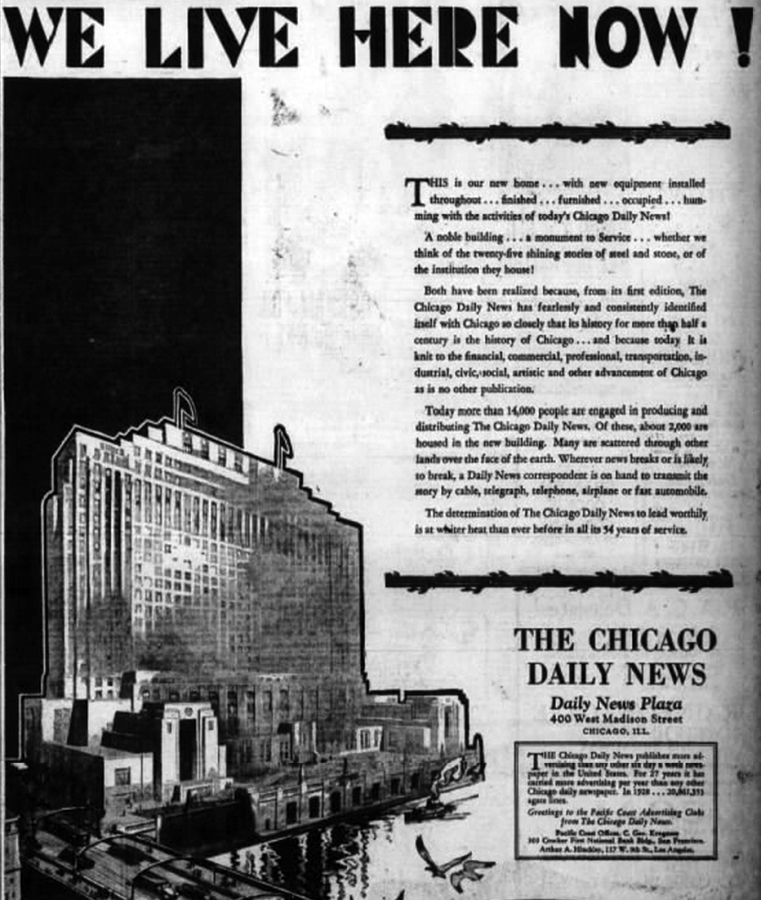 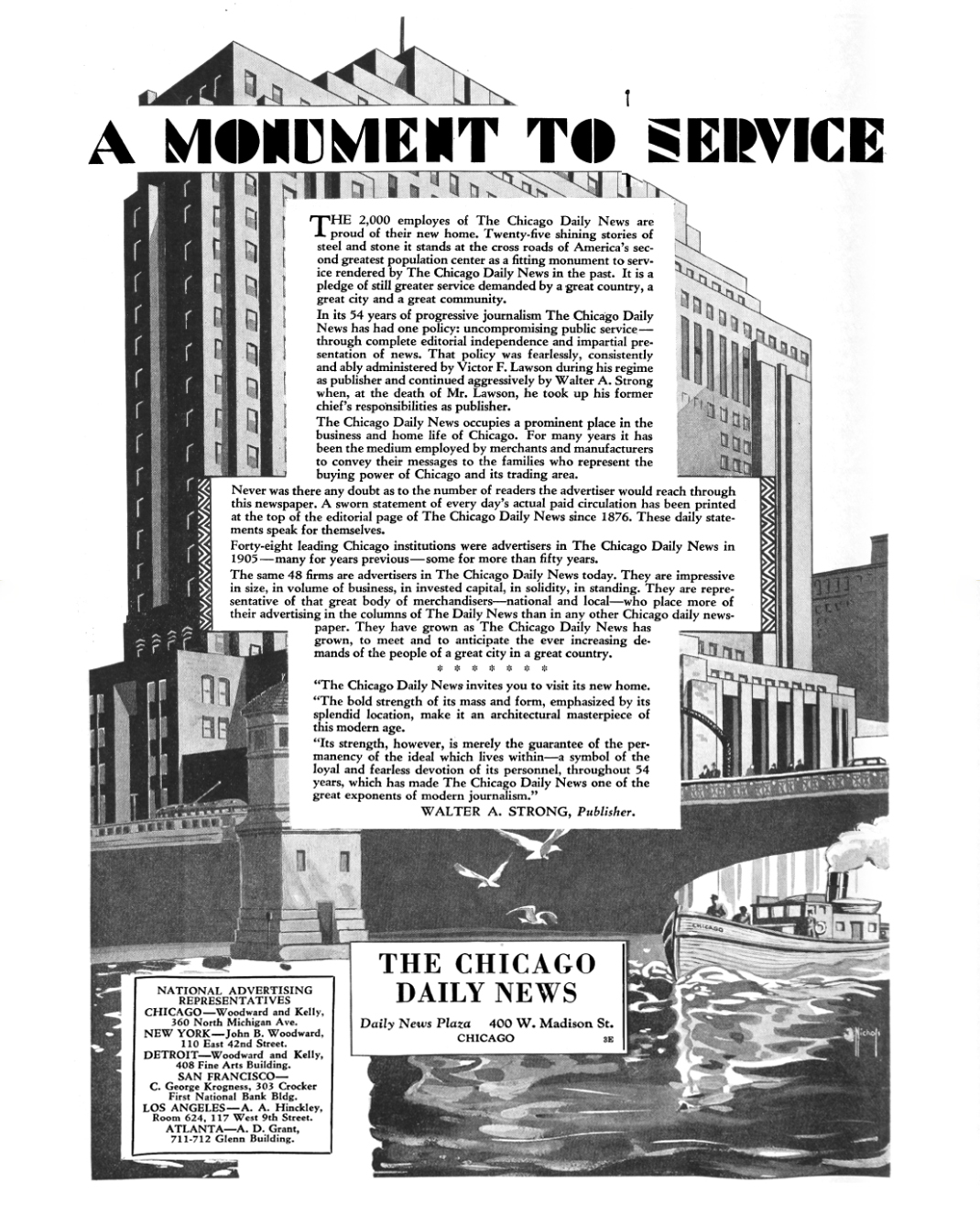 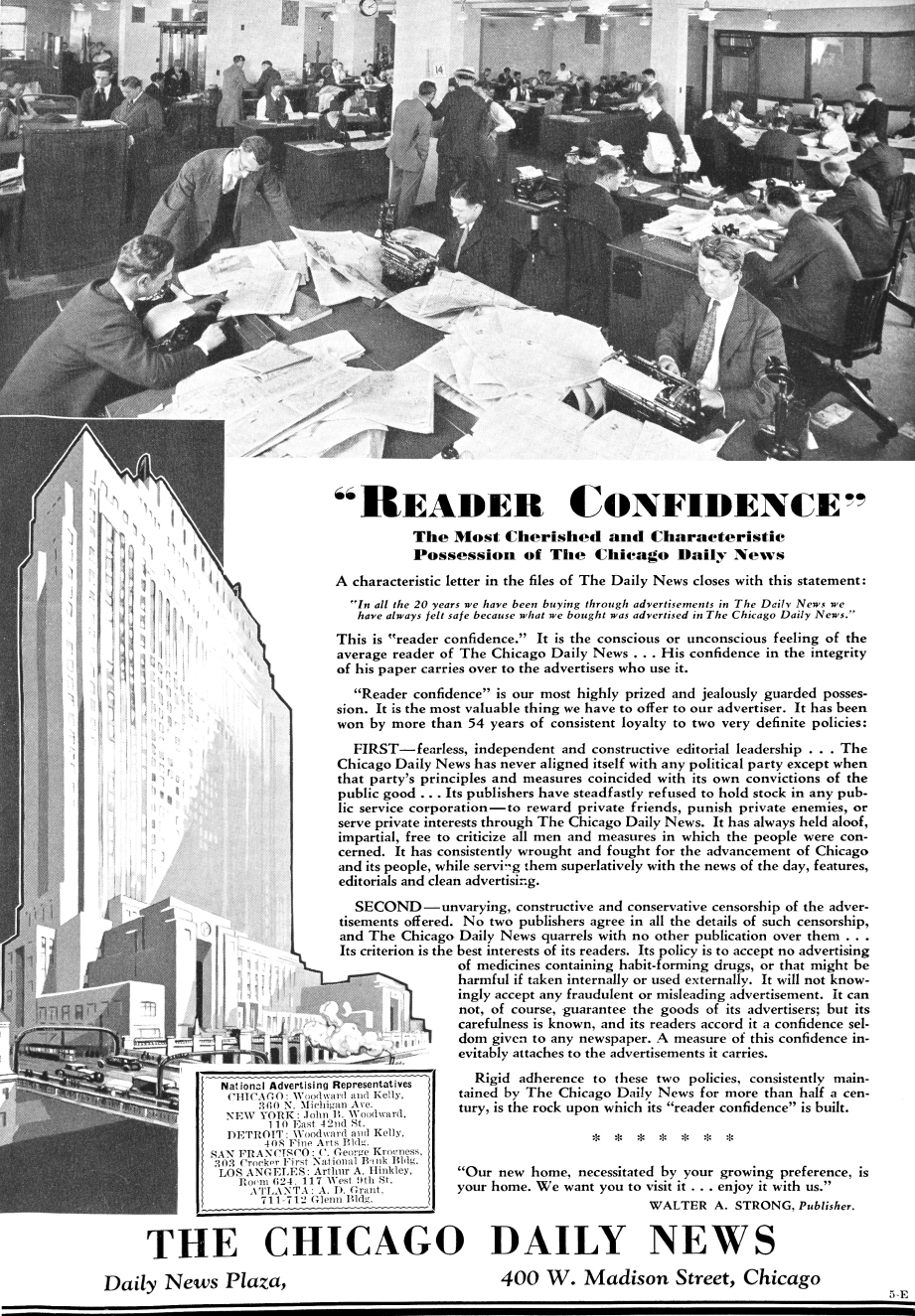 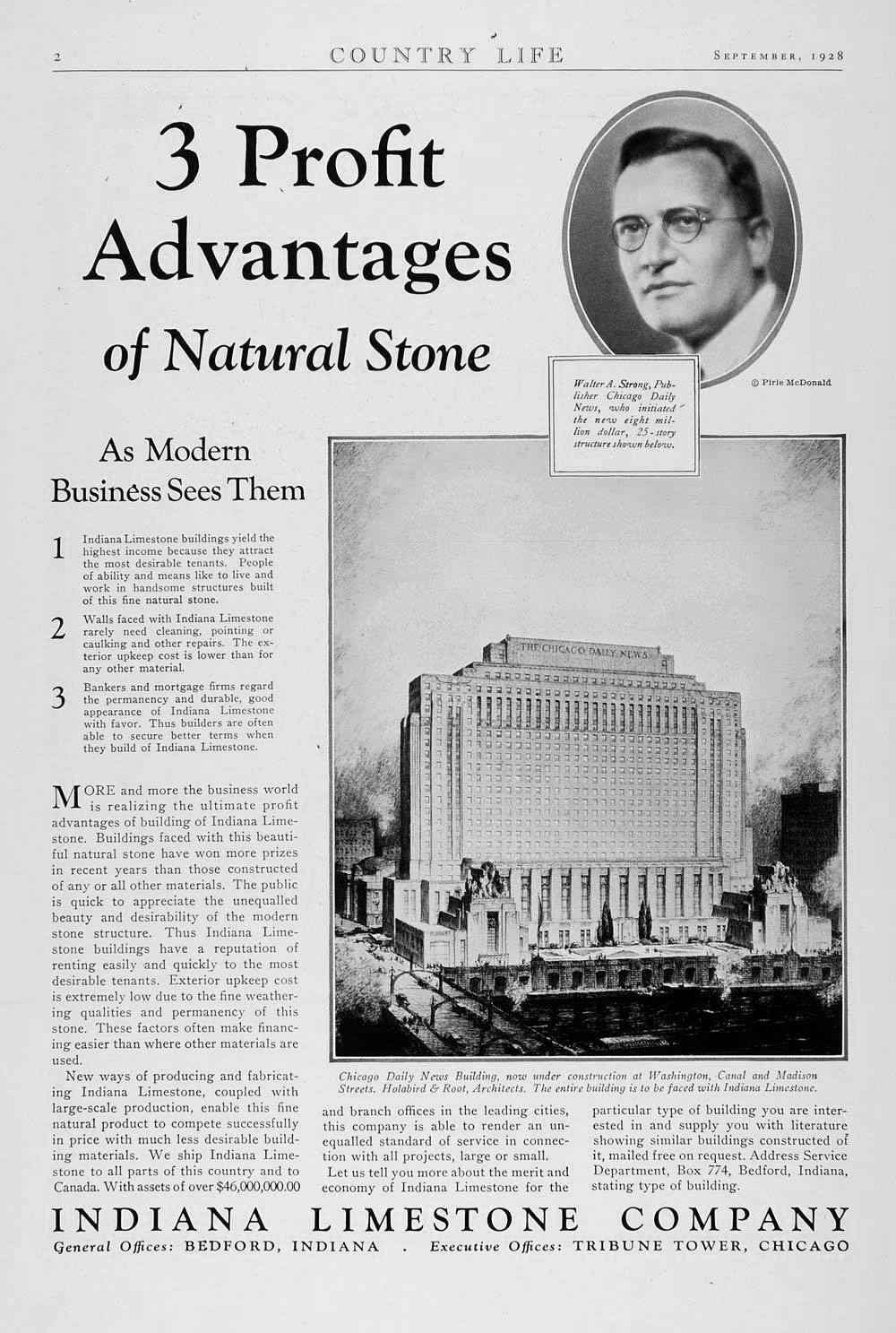 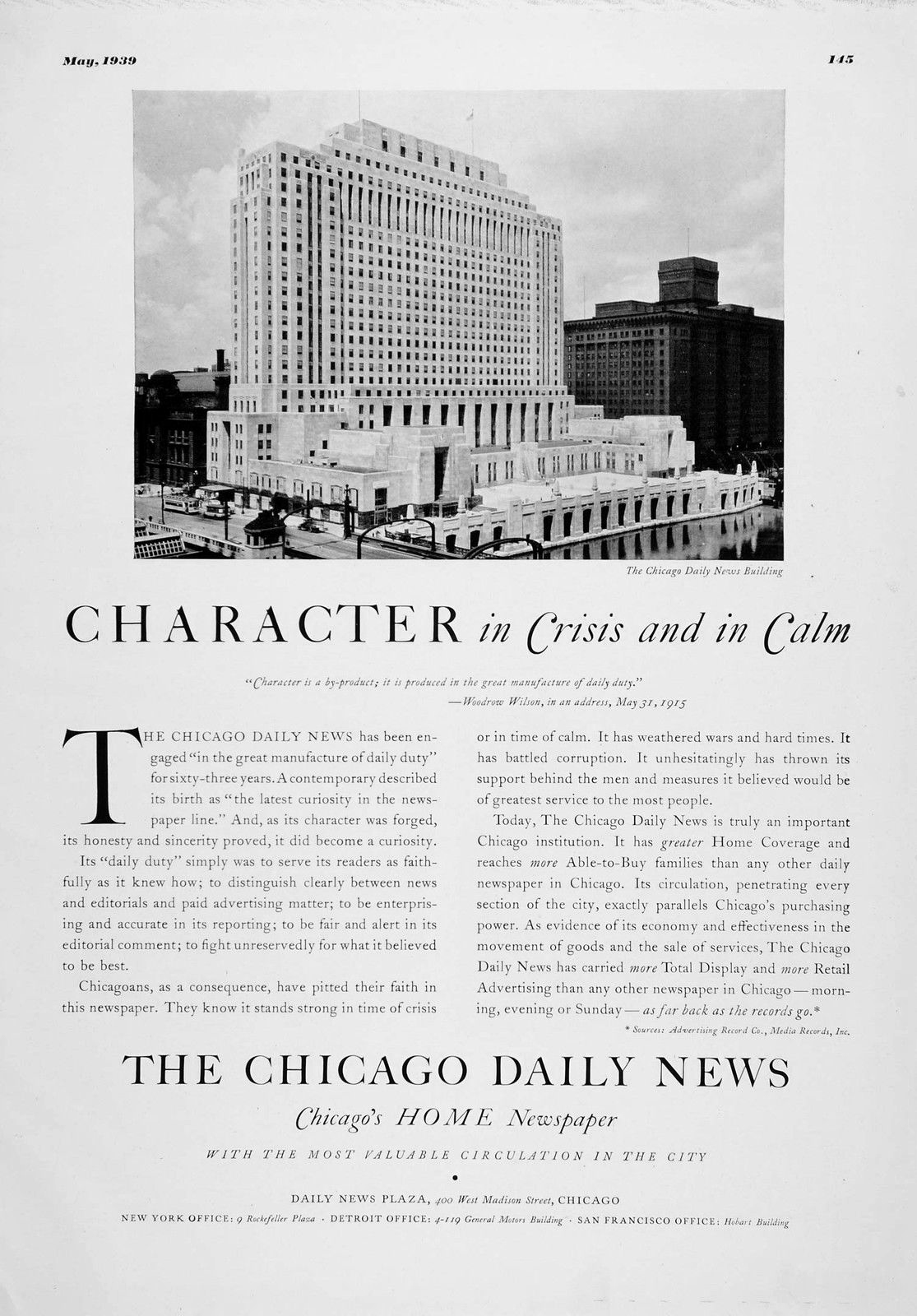 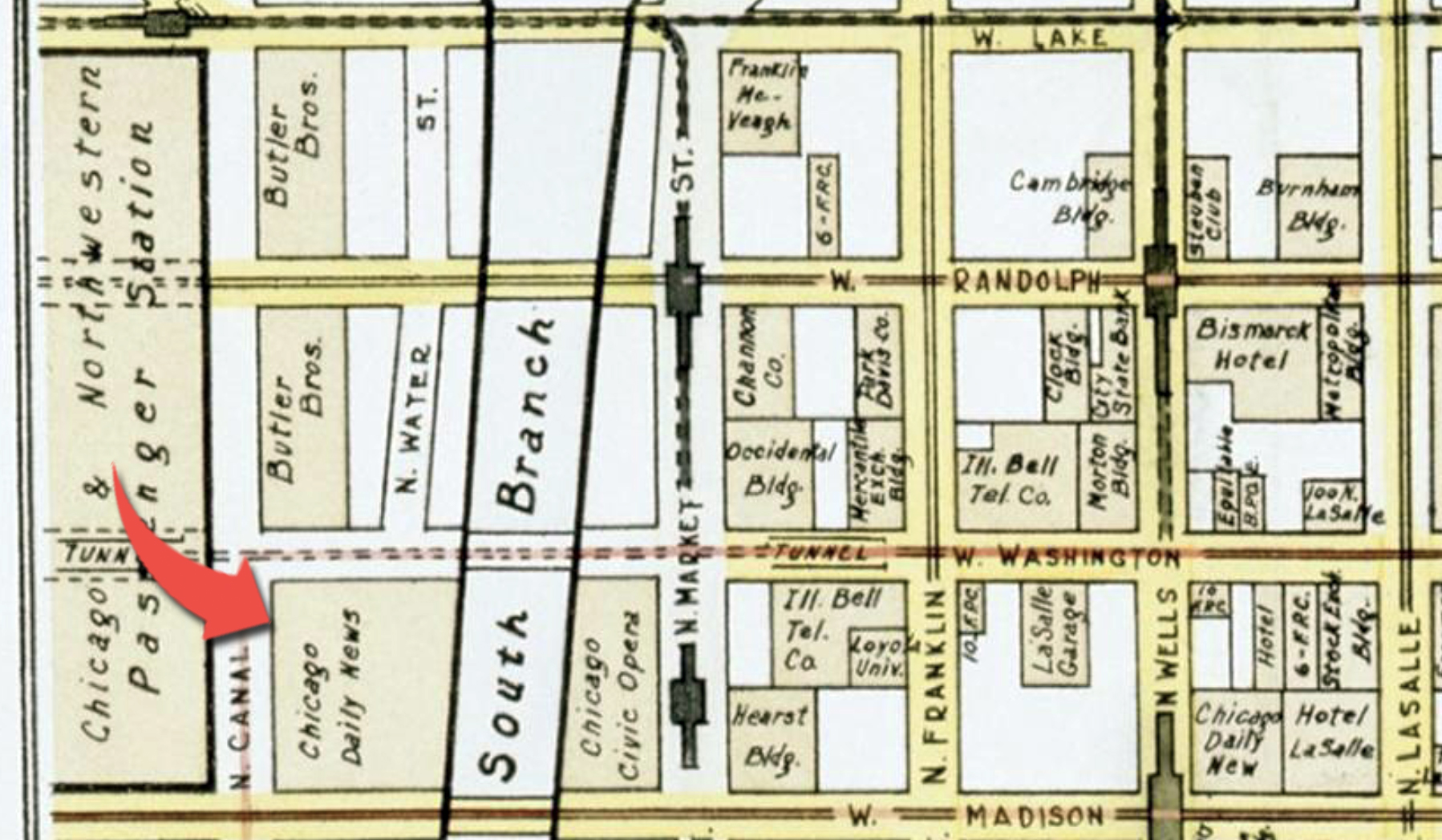