Lazarus Silverman lived at 2213 S. Calumet (Prairie Avenue neighborhood) and hung around Potter Palmer and Marshall Field. Here is the story of how the Panic of 1893 doomed Zimmerman’s Bank. He died in his home on 9 June, 1909.

Fall of Silverman – Hebrew Banker’s Great Surprise at His Failure

No one was so much surprised when Lazarus Silverman’s bank was forced to close the other day, as he himself. Within two weeks the old Hebrew banker had written a letter to President Cleveland giving him advice as to the proper steps to be taken to restore confidence in the financial circles of the country. Ten days before the doors of his bank were closed he was outlining plans for the greatest financial institution in the country, of which he was to be the President and ruling spirit.

Known for forty years in the finances of Chicago, few men were known less. Secretive and close in all his dealings, his business was confined almost exclusively to the Hebrew peddlers and small merchants to whom Silverman was at once oracle, prophet, and judge. Not even now yet have they lost confidence in their old idol. Shattered it may be, perhaps, but most of them accept his statement that they will be paid in full as gospel truth.

Born in Germany sixty-three years ago, Lazarus Silverman came to this country when a child. His parents were poor and the boy went to work early in life. His first ventures were in trade, selling small articles of merchandise. He showed from the first the habits of thrift and shrewed business sense which made him later a millionaire. He had almost none of the advantages of early education, his whole life being spent in business. When he had accumulated a little money he opened a small loan broker’s office, loaning money to his countrymen. He always got the highest legal rate of interest, and as the years went by the cash piled up in his offers. But it was not allowed to remain idle. The eye of the money lender looked over the Chicago of thirty years ago and saw a future before it.

His first savings went into the purchase of unimproved lots on the then outskirts of the city. Later, when money came in faster, it was laid 3out on downtown business property, with, at the time of his suspension, Lazarus Silverman ranked as one of the heaviest holders of real estate in the city. He was one of the few landholders who never sold. Kept up long enough, his policy would have resulted in an absolute corner in the real estate market of Chicago.

Among the Russian Jews newly arrived in America, Lazarus Silverman was the court of last resort. As a rule they do not recognize the authority of legally organized courts even in matters of grave importance. Silverman’s great wealth and his well-known probity gave him, therefore, in their eyes all the attributes of court, jury, and lord high executioner. They brought all manner of disputes and difficulties to him to settle, and among lawyers many stories of his peculaar decisions are current.

In personal appearance Lazarus Silverman is the typical Hebrew banker of medium height, he is of ample firth, the most striking feature of his dress being an extremely large and heavy gold watch chain. His gray beard and scanty hair have given him of late years a venerable and patriarchal appearance. His clothes are well worn, but always brushed neatly, and he was seldom seen without a silk hat. He was accustomed to sit tilted back in a leather-covered arm chair in his shabby banking house at 93 Dearborn Street, looking the picture of financial solidity, with his hands crossed over his chest and his head resting on the back of the chair. Once seated in that chair Lazarus Silverman was the shrewed, careful banker, no matter what he might be elsewhere. He would walk into his banking house chatting and laughing with a friend, but the moment he felt the arms of that rusty old chair enfold him the smile died away. He was once more strictly the man of business and his talk became guarded and careful. 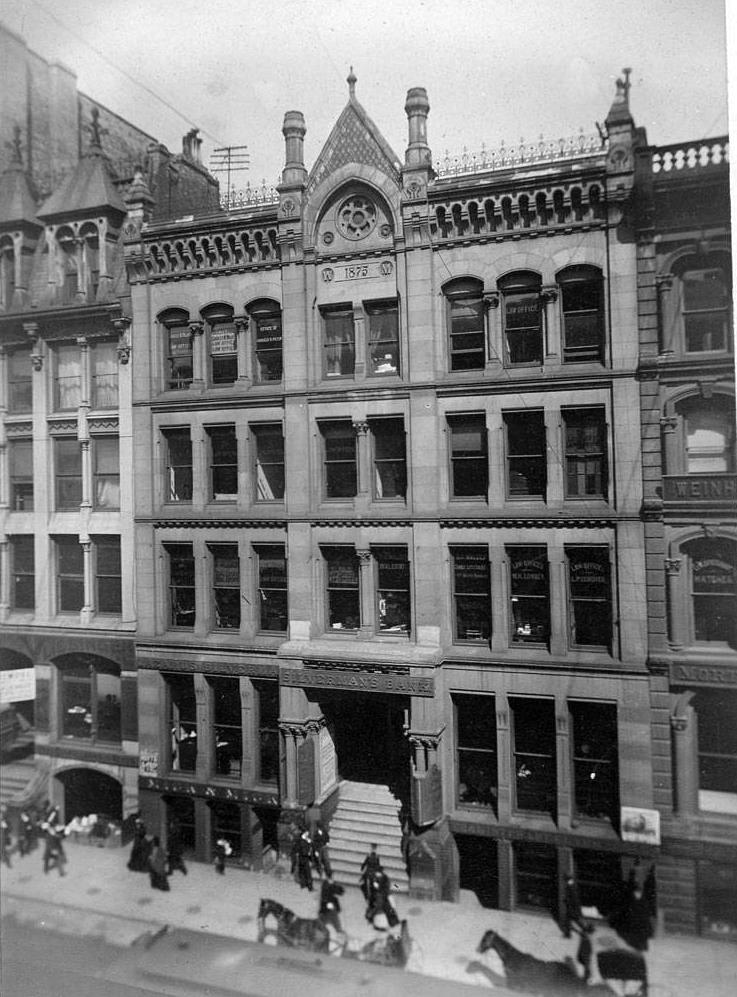 Mr. Silverman was an orthodox Hebrew of the strictest type. His banking house was always closed on Saturday, the Hebrew holiday, and as regularly open for business Sunday morning, closing usually at noon. Strange as it may seem, this peculiar system of office hours was not only in harmony with his religious views, but it proved advantegeous to his business.

He was a prominent member of the Hebrew Temple, at Thirty-third Street and Indiana Avenue, and took an active part in its services.

His Pride as a Financier. – Next to his religion, dearest to the heart of Lazarus Silverman is or was his pride in himself as a financier. The good name for honesty and promptness in meeting obligations which he had built up was a jewel which he closely guarded and dearly priced… His bank had gone through all the financial panics since the early fifties without suspension for a day or repudiating an obligation.

“In 1863,” he was accustomed to say, “I was the only banker in town who advertised to pay my depositors in gold. I wanted the people to know that Lazarus Silverman paid his debts at par.”

Of late years money has accumulated to such an extent in the coffers of the old banker that almost a radical change came over him. For years he had been contented to be the magnate of his countrymen and to stand high among the rich men of Chicago. Now he wanted to double his already great wealth. He wanted to win national fame as a financier. Only to his intimate friends did he lay bare the secret of his hopes. To all others he was still the careful, prudent money lender demanding prompt settlement of debts and paying his own according to the same rule.

Something more than a year ago he volunteered some advice on the financial situation to Senator John Sherman, and was pleased to think that in part, at least, it was followed. Then when iron was first discovered in the Minnesota ledges along Lake Superior he saw an opportunity to make a great amount of money. He joined such capitalists as H. H. Porter, Marshall Field, H. M. Flagler, the Standard Oil magnates, D. O. Mills, and Roswell P. Flowers of New York in the formation of the Minnesota Iron Company, of which they are directors and he a heavy stock-holder. Then it was found necessary to build a railroad to carry the ore from the mines to the lake coast, and out of the carefully gathered funds of Lazarus Silverman came money to assist in building the grade and laying the rails. Out of the venture the old banker is said to have made a big profit, but, nevertheless, it helped to scatter his resources and to put securities into his hands which, while valuable, were not easily cashed in in bad times.

All of the bankers recent ventures, however, did not turn out so well. It is told of him that about a year ago some promoters from Boston interested him in salt mines in Kansas. He was persuaded to invest somewhat heavily only to find later that the fields were so far from means of transportation as to be almost worthless for the time at least.

At the time Lake Street L road people were in difficulties Mr. Silverman was mentioned as having agreed to undertake the floating of bonds. At the time, while admitting that he had some talk with the parties, he denied any active interest in their plans, and a little later is believed to have dropped out of them entirely.

Today Mr. Silverman is confined to his home, almost overcome by the disaster which has come upon him. With liabilities of about $700,000 and assets estimated at least double that amount he feels that his good name as a financier of unfailing success and good judgment is almost hopelessly damaged.

May Dissolve The Assignment.

Mr. Silverman’s Creditors Talk of Allowing Him To Administer His Estate.

An attempt is underway to dissolve the assignment of Lazarus Silverman, the Dearborn Street banker, who failed Thursday. Several of the larger depositors and creditors had a conference yesterday with ex-Judge Grinell, Mr. Silverman’s attorney. The creditors manifested a disposition to allow the estate to be taken out of the hands of the Title Guarantee and Trust Company and restored Mr. Silverman to administer under certain restrictions. It is said the creditors felt that a more expeditious settlement could be made this way… 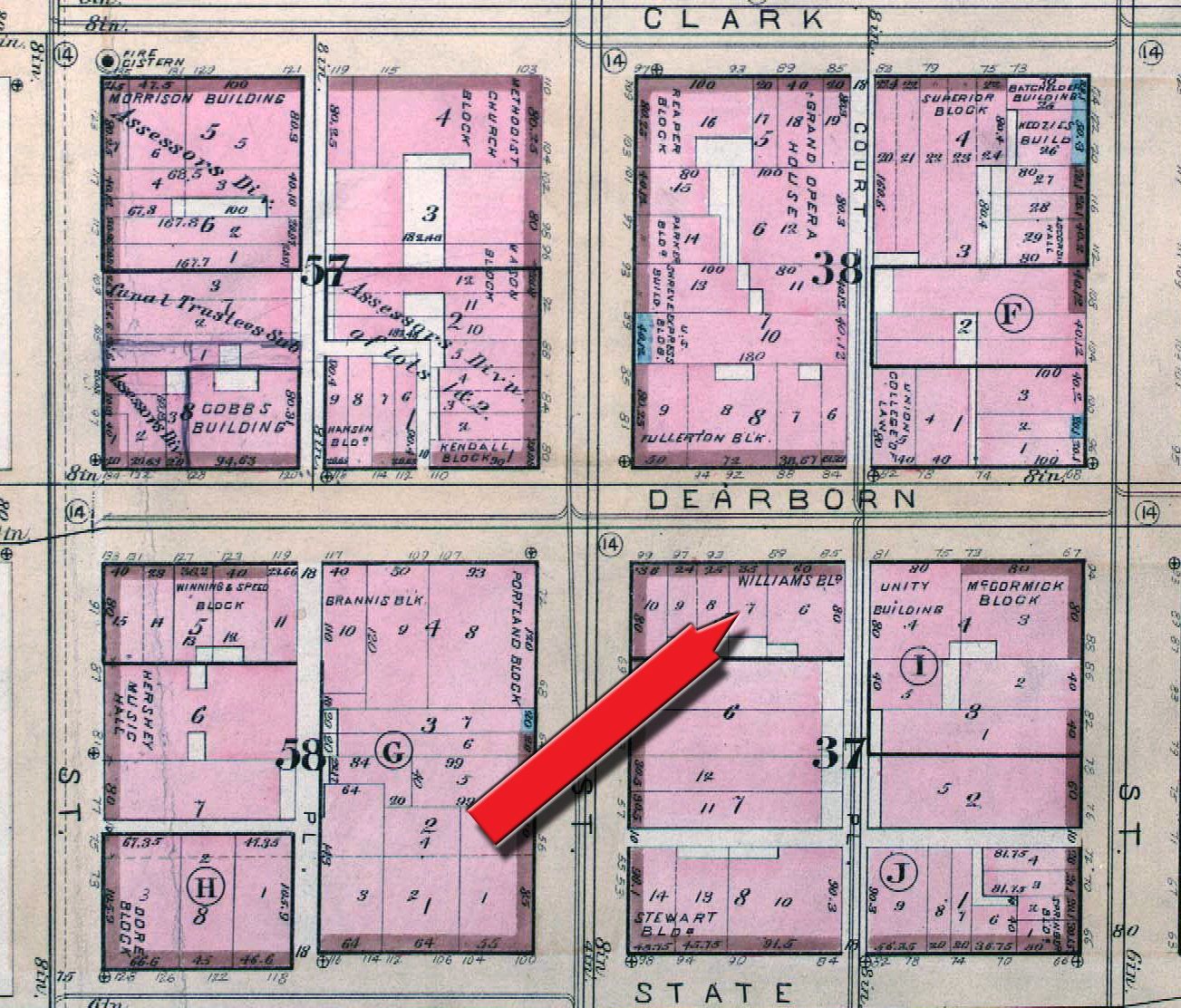