In October 1871, while St. Joseph’s Hospital was under construction, the city suffered from the Great Chicago Fire. The new hospital building was spared and served as a shelter for many of the fire victims. 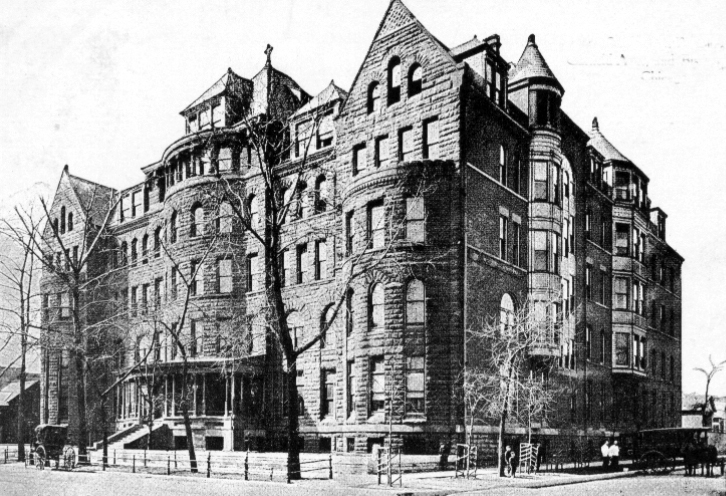 The Chicago Tribune describes the opening in Apr 28. 1872;
It is of brick, with trimmings of Kankakee sandstone. It presents a handsome front ln the secular Gothic style; but the whole symmetry or the building is not developed at present, as the plan requires the addition of heavy transverse wings, which will not be erected immediately. The dimensions of the completed portion are 95 feet front by 60 feet In depth; the wings be 30 feet by 125, wtth a central wing 30 feet by 80-thia last to be used as a chapel. with a refectory underneath.

The hospital is four lofty stories in height, beside the basement. The first, second and third stories are occupied chiefly as wards and single rooms for patients, with the necessary offices, laundries, kitchens and other auxillaries. There are accommodations at present for one hundred patients. Every room is furnished with hot and cold running water and every ward with separate bath rooms and water closets. The wards are numerous, so that no ward is required to accommodate more than almost a half dozen patients,

Each floor communicates by dumb waiter and by chutes for linens and dirt, etc, with the kitchen, laundry, and other departments below. There is also a provision made for a steam elevator. Around this elevator runs the main staircase which with the spacious halls, constitutes imposing and attractive features of the building. 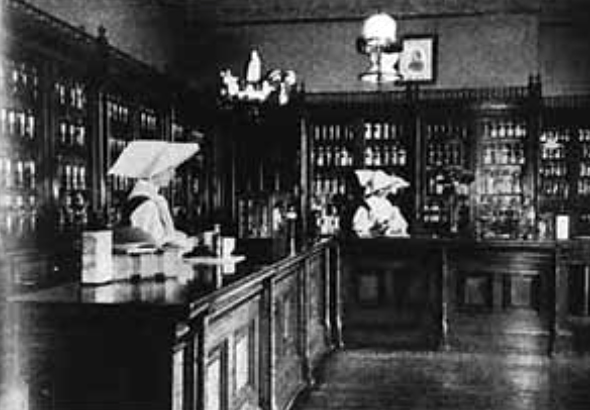 The following description is from an 1891 Guide to Chicago:
Located on Garfield ave. and Burling St., near N. Halsted St., North Side. Take Garfield ave. or N. Halsted car. Conducted by the Sisters of Charity. Sister Mary Cephas, superior. Old residents of Chicago will remember Providence Hospital, in Lake View. It was an unpretentious frame structure in a place rather remote, at that time, from the city, but it was the most suitable which the means of the Sisters of Charity could compass when they took up their hospital work in Chicago in 1869.

By unceasing effort, however, a more desirable location was secured, and in 1871 the present St. Joseph’s Hospital was erected on Garfield avenue (then Sophia St.) The site is peculiarly suitable for the purposes of the institution, being in the highest and dryest portion of the city and having all the advantages of proximity to Lake Michigan and Lincoln Park. The sanitary advantages of the hospital have well supplemented the skill and care of the excellent staff of surgeons and physicians in charge. The surgeons in charge are—Prof. Chas. T. Parkes and Dr. C. W. Johnson. The physicians in charge are—Dr. Geo. W. Reynolds (obstetrician and diseases of children). Prof. D. R. Brower (mental and nervous diseases). Dr. J. E. Hequembourg, Prof. F. L. Wadsworth (consulting physician) and Dr. Robert Tilley (diseases of eye and ear).

The hospital is fitted with all the latest improvements for ventilation, heating, etc., and has accommodations for two hundred patients in wards and private rooms. Of the latter there are fifty, tastefully decorated, thoroughly comfortable, with the most approved furnishings and abundantly supplied with light and air. The wards are also models of neatness and comfort and so carefully have the interests of the sick been provided for that open fireplaces have been placed in each ward. The building is heated by steam. The schedule of prices is so arranged that all classes of patients can be accommodated and avail themselves, at reasonable rates, of the superior advantages of the hospital. Physicians whose names are not on the staff have the privilege of attending patients in the private rooms. Parents of children suffering from chronic medical or surgical diseases requiring prolonged treatment can arrange to leave them in the care of the institution.

The out-patient department provides for the treatment of all persons presenting themselves at the hospital office, and includes the same wide range of treatment as the hospital proper. Persons without means are made welcome to the advantages of this department. Of the tenderness and care with which the sisters of charity treat all persons, of whatever degree, committed to their charge, it is hardly necessary to speak. The unremitting attention, the more than sisterly solicitude, the constant vigilance and the unselfish devotion of these noble women, in the service of the afHicted, has won for them the warmest respect and admiration of people of all creeds the world over. 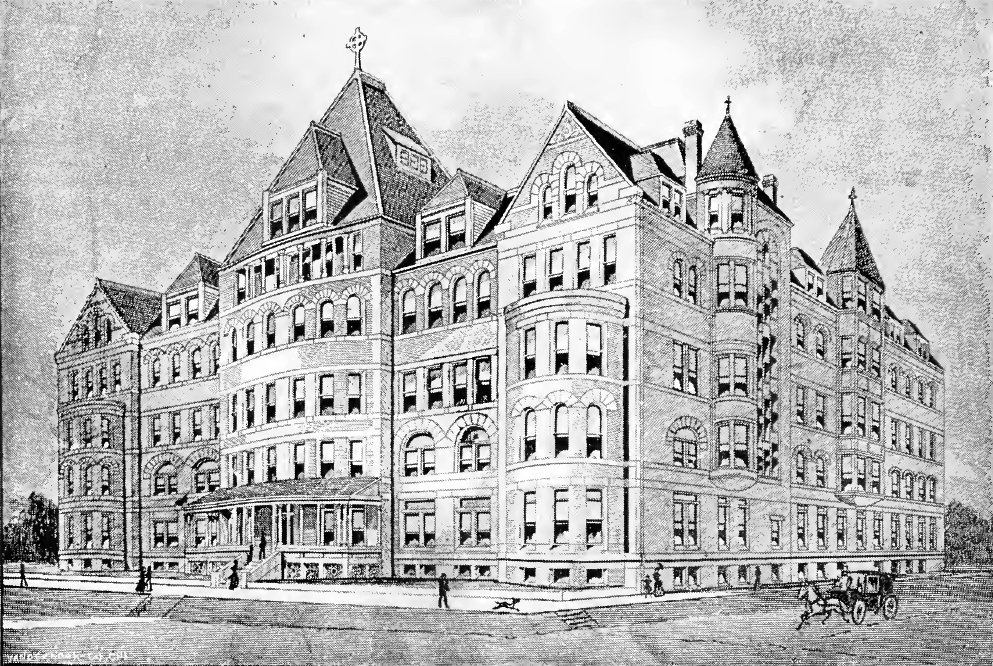 The Saint Joseph School of Nursing, which was affiliated with De Paul University, opened on the Burling Street property. By 1894, inpatient and outpatient services in the hospital included surgery, medicine, pediatrics, obstetrics and gynecology, cardiac care and eye, ear, nose and throat treatment. Some 1,504 nurses graduated from the school prior to its Burling Street closing in 1964.