According to announcement made in our columns., the dedicatory ceremonies of the new hall of the Turngermeinde or “German Turner’s Association, were held on Thursday afternoon, at their new hall on North Clark street. The edifice is an imposing structure erected by Messrs. Schmidt & Katz after plans designed by A. Bauer, and cost exceeding $18,000. The hall was beautifully festooned with flowers and evergreens, and appropriately draped with national colors. Notwithstanding the inclemency of the weather, and the fact that the snow had laid an embargo upon travel, there was a goodly gathering of the Turner’s of the city and a fair representation from similar organizations in other cities, comfortably filling the large room now for the fret time thrown open to the public. We noticed also a large number of our prominent German citizens participating in the novel inauguration ceremonies. Of course excellent music and good speaking were not wanting.

The members of the Chicago Turngemeinde invited guests, and pupils, assembled at noon, at Kinzie Hall, after which they marked in procession, headed by the Great Western Band, through the principal streets to the new ball. After a short rest for refreshment, the large hall was thrown open to the Turners, their guests and friends, and the galleries to the ladies. The members arranged themselves in front of the platform which was occupied by the speaker, representatives of the press, dignitaries from abroad, architect, builders, executive committee, etc.

The exercises were opened with the “Jubilee March,” by the Band, after which Mr. Bauer, the architect. formally delivered the keys of the building to the Superintendent, Joseph Huhn, who in turn handed them over to Mr. Weidinger. Mr. Weidinger, in behalf of the Executive Committee, accepted them in a brief address, which was well received and enthusiastically applauded.

Madame Albertina Kenkell, a German actress of merit, read the opening prologue, composed expressly for this occasion by Casper Butz, Esq., of Chicago. Madame Kenkell’s effort was received with great favor, and at its close she was highly complimented by the demonstrative audience.

Wm. Rapp, Esq., editor of the Illinois Staats Zeitung, delivered an excellent extemporaneous address which was received with marked favor, and elicited tumultuous applause, particularly in those portions in which allusion was made to the known patriotism of the Turners, and the noble stand taken by them in the suppression of the rebellion.

Mr. A. Follger, an actor from the German theatre, then recited with much enthusiasm, poetry appropriate to the occasion, written by G. Von Hollen.

The exercises were terminated by singing, and music by the band.

On the whole the ceremonies were eminently satisfactory, and had not the elements conspired to render such a consummation impossible, the vast hall would have been filled overfilling.

The members of the Chicago Turngemeinde are entitled to great credit for their efforts to bring this enterprise to a successful concision. At the breaking out of the rebellion, this membership was large, but so many of the younger, and more influential members became involved with martial spirit and enlisted, that until within the last few months the organization has languished. The completion of this new edifice is the successful termination of one of the efforts to infuse new life into the order, and it may reasonably be expected that it will soon flourish with its pristine vigor.

The dedicatory ceremonies were followed in the occasion:

After the concert a sumptuous lunch was laid which was freely ecrved until long after midnight.

The Turner’s Hall.—The plans of the new Hall recently erected for the German Turner’s Association, on North Clark street, were drawn by H. Rechwoldt, not by Mr. Bauer, as has been stated. Mr. Bauer assisted Mr. Rechwoldt in superintending the erection of the building, but had nothing to do with making the plans. 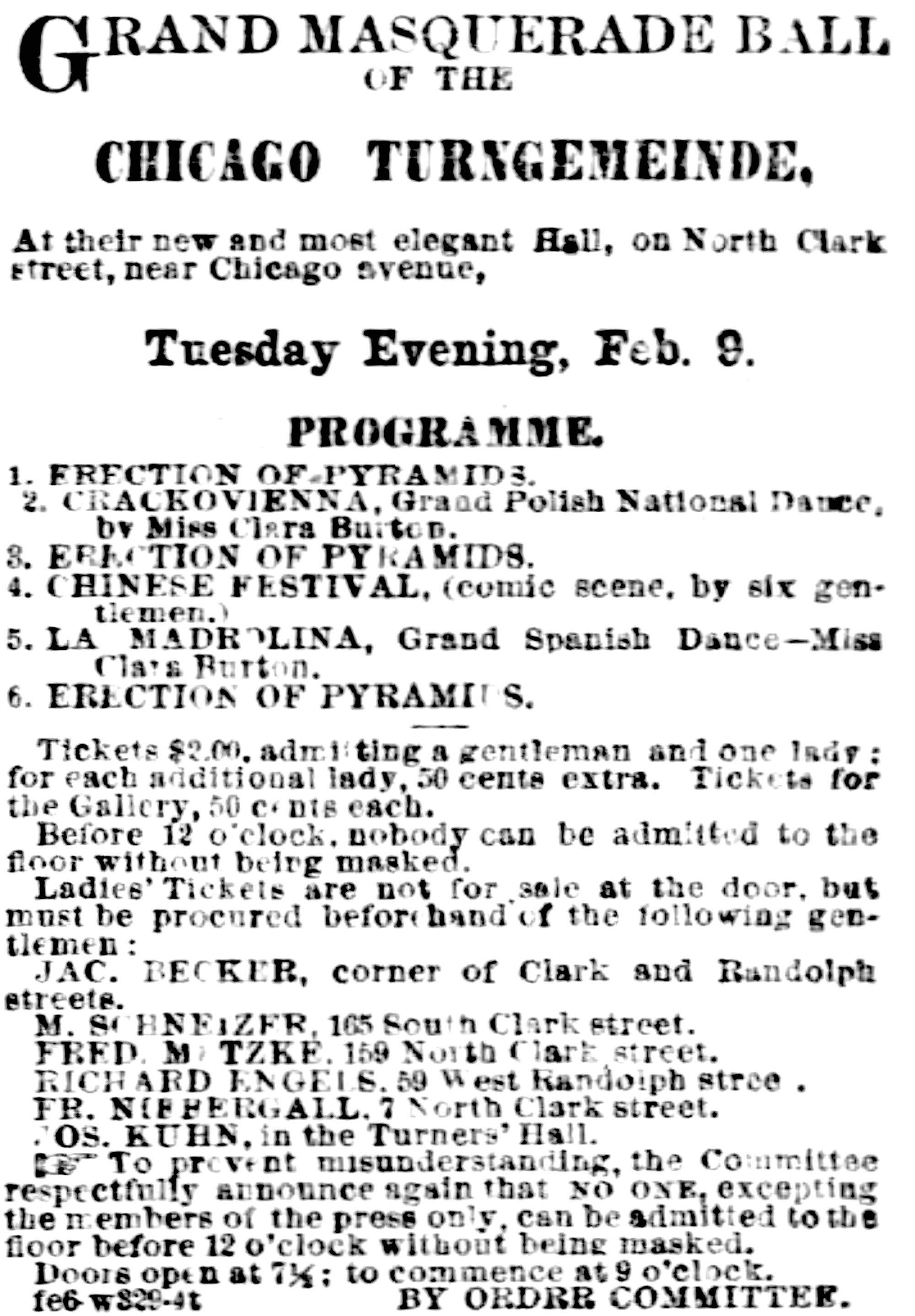 Turngemeinde Masquerade,—The grand Masquerade Ball, to be given by the Chicago Turngemeinde, will take place at the Turners’ Hall, North Clark street, on Tuesday evening, 9th. An advertisement in another column gives a programme of the leading features of the affair.