Those old dilapidations on the corner of Washington and Dearborn streets have been pulled down, and in their place is being erected a handsome business block, to be called Fullerton Block. The corner store will be owned by Tuthill King, and the remaining ones by Alexander Fullerton. The block will be three stories in height, with basement, and a story in Mansard, or French roof, and will occupy 80 feet on Washington by 124 feet on Dearborn street. The building, which is now ready to roof, is of Milwaukee pressed brick, with stone trimmings. The principal floor will be divided into stores, all of which are rented, and the remaining stores will be private offices, most of which are already engaged. The architect of this block is W.W. Boyington; its estimated cost, $60,000. 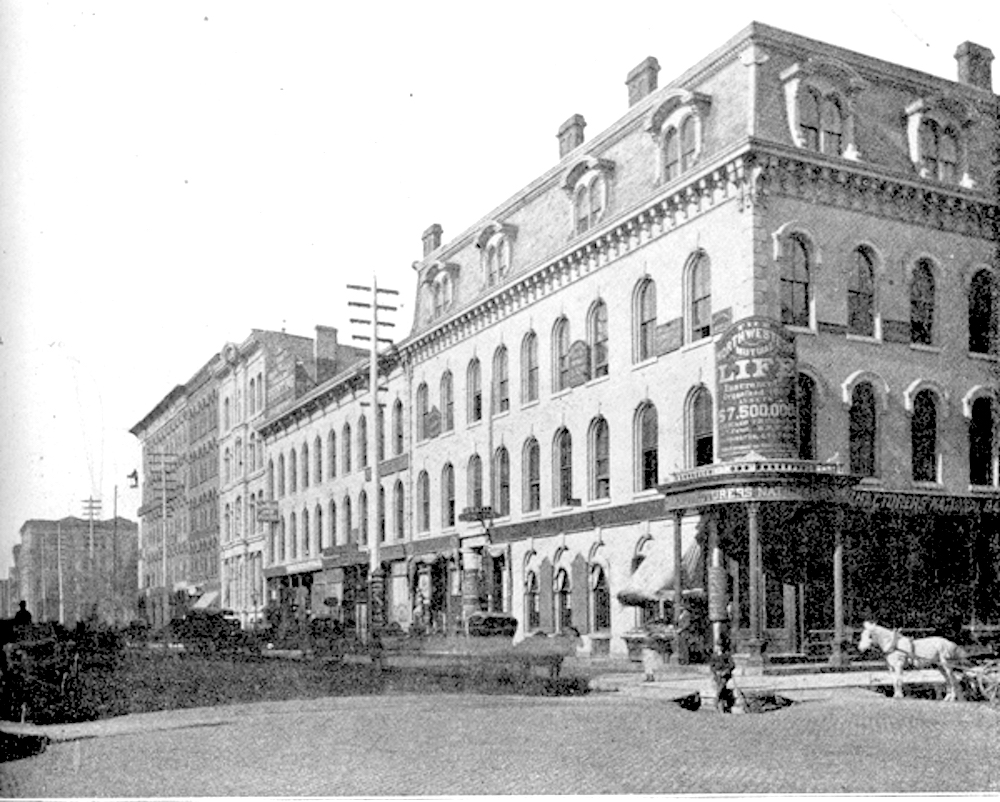 A very pleasant affair took place on Saturday afternoon and evening, memorable after it class in business circles, the opening of Edward Ely’s new and elegant clothing establishment in King’s new block, on the corner of Washington and Dearborn streets. It was memorable for the number present. Over fifteen hundred visitors were present at various times during the afternoon and evening, all of them delighted and profuse inn their expressions of admiration. These were not only from among the large number of patrons Mr. Ely has secured to himself in his twelve years of successful business but also of others drawn thither on this occasion by the growing impression for some time past that the establishment was to bear features new in Chicago. Nor was the impression an incorrect one, as shown when the labors of the workmen having ended with the finished interior, and the removal having been effected, Mr. Ely then opened the doors and was again “at home” to customers and the trade. His present stand is by far the most elegantly appointed, as it is the most spacious in Chicago, and probably the United States. It is rare that we can indulge in such superlatives, without invidiousness; but Mr. Ely has wrought for this express pupose with such liberality and taste, that we only accord him what his rivals in trade must do—the very first place in respect to appointments and adornment. The store is eighty feet on Washington by fifty on Dearborn. This spacious area is divided up and apportioned under Mr. Ely’s supervision, and bears in every detail the marks of skilled taste. The general wood-work of the interior is solid black walnut, with imitation ebony beadings and carved work, making a pleasing contrast and charming in general effect. The doors, sashes, tables, counters, cabinets, cases, mirror and picture frames, are all in the same style. The space is divided into the General Salesroom, occupying the whole of the Washington street front, with entrances on both streets, and lighted by a costly plate glass front. The several compartments are divided from each other by highly ornamented black walnut partitions, reaching only midway to the lofty ceiling, giving to the eye at once the whole the whole general effect of the superb fresco work of the latter. A very chef d’oeuvre of art, it is the most exquisite in design, coloring and details, we remember to have seen. The large sales room has a full range of plate glass cases along one side, for the exhibition of finished custom work. Directly in the rear, and filling the rear of the beautiful little adjunct Furnishing Department on the Washington street front, is the Counting Room and Cutting Department, with ample tables and appliances for those operations of the tape measure and shears, out of which spring graceful garments. Here Mr. Ely has his own desk so placed as to command, through the entrances, the full sweep of both rooms. Here the four cutters are busy, those first having to do with your measure never cutting cloth, but getting cut the pattern in paper to be duplicated by another workman in the desired fabric. Just adjacent and opening on the three rooms is a beautiful little Dressing Room with mirror and toilet apparatus for the convenience of customers, and adjunct sure to be appreciated by Mr. Ely’s patrons.

In these superb premises, the arrangements and details of which do infinite credit to his taste and judgement, Mr. Ely may well review with honest pride a business career which twelve years ago he began in the little wooden building opposite the Tremont House on Dearborn street, nearly opposite the more noted place of business Mr. Ely occupied for ten years past. Some of the figures of comparison of then and now are instructive. Then Mr. Ely paid about $250 rent. He was his own cutter, salesman and accountant. His growth has been sped by the fact that he did all these things well. Now in his triple store, at a rental of $6,000, he gives employment to four cutters, four clerks, one accountant, two messengers and one porter, with an arm of work people, which, were they all to visit him at once, of any given day, it would look like a run on the adjoining Saving’s Bank.

The new store suggests still other names than his own. The combination of skill he has brought together are his sole credit, though the details belong to others of our Chicago citizens. We have never seen a nearer approach to high art in joiner work, tha the exquisite workmanship in solid black walnut by Messrs. Healy & Aiken. The beautiful show cases, graceful in design and perfect in finish are Daniel Barclay’s.

Murray & Gold have placed their ne plus ultra of Steam Heating apparatus in the very choicest of all locations in Chicago, when, together with Mr. Ely’s store, they complete their work in the new Opera House and the Chamber of Commerce. Jevne & Almini’s deft artists have hung beauty above the whole in frescoed ceiling. H.M. Wilmarth, of 189 Lake street, from his extensive lines of gas fixtures of all designs and rival forms of beauty, has secured just the pattern to Mr. Ely’s express order, to harmonize with the whole of the decorative features and through all the work of planning and arrangement the excellent skill of W.W. Boyington, the architect of the building, has made its influence felt.

It remains only to speak of Mr. Ely’s relations to our city trade. In his former smaller store his attention has been more exclusively given to goods of the very finest class, the secret of his success and wide reputation as a clothier. The prices his goods have borne have been a guaranty of the very highest excellence in grade. He proposes now to extend his lines and meet the wants of all classes of customers. He takes the ground, that he intends to maintain, that he will not be undersold by any house west of New York in goods of similar grade, and the salaried man and the millionaire may each consult their taste and purses from his high piled and extensive stock, sure that what they buy will be the best of class. Mr. Ely has been successful, and he has deserved success, and the extended limits of this reference to his new establishment, are not illy bestowed in the credit due to his instance of the new business era in our city, the expansion of our tradesmen into palatial establishments, at once indicative of individual success, andthe general prosperity of Chicago.

Northwestern Mutual Life Ins. Co.—We call attention to the notice of the removal of the Chicago office of this Company, from 91 Dearborn street, to the corner of of Dearborn and Washington. Entrance 85 Washington. This Company organized in 1859, has in six years issued over 10,000 policies and accumulated a half million of assets, and has already become one of the largest moneyed institutions of the Northwest. We are no less gratified than surprised at these results, and would commend this thoroughly Western company to the patronage of our readers. Remember the number, 85 Washington st.