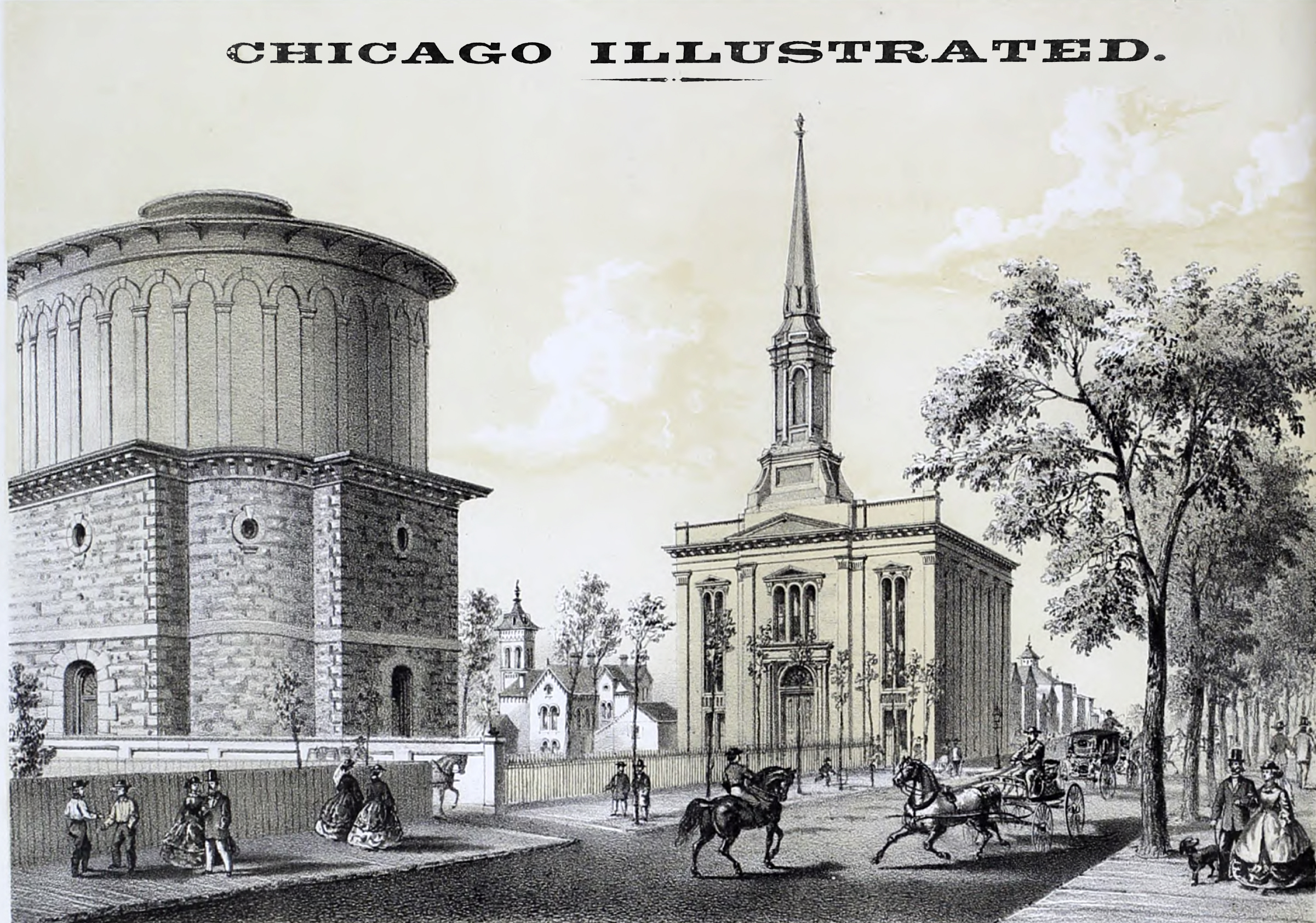 The building is of red brick, with stone trimmings, and in size measures 64 by 103 feet. It is conveniently arranged. The audience room is reached by spacious stairways ascending from the vestibule, and is admirably adapted to its purposes. The basement story, all of which is over ground, is divided into various rooms, such as Sunday School, Lecture and Class Rooms, Pastor’s Study, Library Room, and several Offices. The main auditorium will seat 1,250 persons, and by the use of benches and chair in the aisles, 250 more can be seated.

The original Society, under the name of the Tabernacle Baptist Church, was organized in August, 1843, and was composed of members formerly belonging to the First Baptist Church. In 1851, the Society, which had been worshipping in a building on the south side, erected a new edifice on Desplaines street, in the West Division. The First Baptist Church Society continued to worship in the brick building on the corner of La Salle and Washington Streets, where now stands the Chamber of Commerce. The number of Baptists residing in the west division became large enough to justify a separate organization, and when, in 1864, the original or First Baptist Society concluded to sell their site to the Chamber of Commerce, they donated the building to a portion of the members to found the Second Baptist Church in the West Division. These offered terms of union to the Tabernacle Baptist Church, which terms were accepted, and a new Society, or re-organization of the original, was established under the name of the Second Baptist Church. The building was taken down carefully, every portion marked, and was removed to the west division, where they were again put together and the building re-erected, preserving its original shape, dimensions and arrangements; and with the result of a careful application of paint, the building of the First Baptist Church was renewed upon a new site.

The Rev. E. J. Goodspeed was inaugurated as Pastor of the Church in December, 1864, and is the Pastor now. Personally one of the most amiable and accomplished clergymen in the city, his high intellectual gifts and indefatigable zeal have won for him the strongest respect and veneration from his congregation. The unity between the Pastor and his flock is not only admirably sustained, but strengthens with time and experience.

This Church is noted for the attention paid to its Sunday Schools. It has 1,184 scholars enrolled, and the average attendance each Sunday is 812. Over $2,200 was expended for Sunday School purposes the past year.

The Officers of the Church, in addition to the Pastor are:

On the left of the picture is a view of one of the City Reservoirs. There has not been much pains taken to make the building ornamental. Its capacity is 500,000 gallons.

Between the Reservoir and the Church is a distant view of the costly private residence built by the late Peter Schuttler, Esq.