Chances for a regular municipal golf course are beginning to look up. The made land in the north end of Lincoln Park has been available for the Scotch game for some time, but little interest was shown by the park board in the sport. No money was on hand to improve the course and it was laid out in a haphazard manner by players themselves.

In time a full 18-hole course will be put in and conditions should make it one of gthe best courses in the vicinity of Chicago. The turf more nearly resembles that in the English seacoast than does that of any other club in the west. A golf architect should be secured properly to lay out holes, install the necessary traps and make the present nine-hole course “sporty.”

Players on the North Side have organized the Lincoln Park Golf club, modeled after the clubs on the municipal links in Jackson and Garfield parks, and application will be made for membership in the Western Golf ass’n. A tournament schedule will be prepared. Women and children are eligible as associate members of the club.

Lincoln Park golf course is in condition, according to the Commissioners, and big crowds are expected for Saturday and Sunday competition. The North Side course does not compare with Jackson park at present, but the spongy turf and the cross wind from the lake make for great possibilities, and a few more traps will form a stiff test for any fellow’s game. 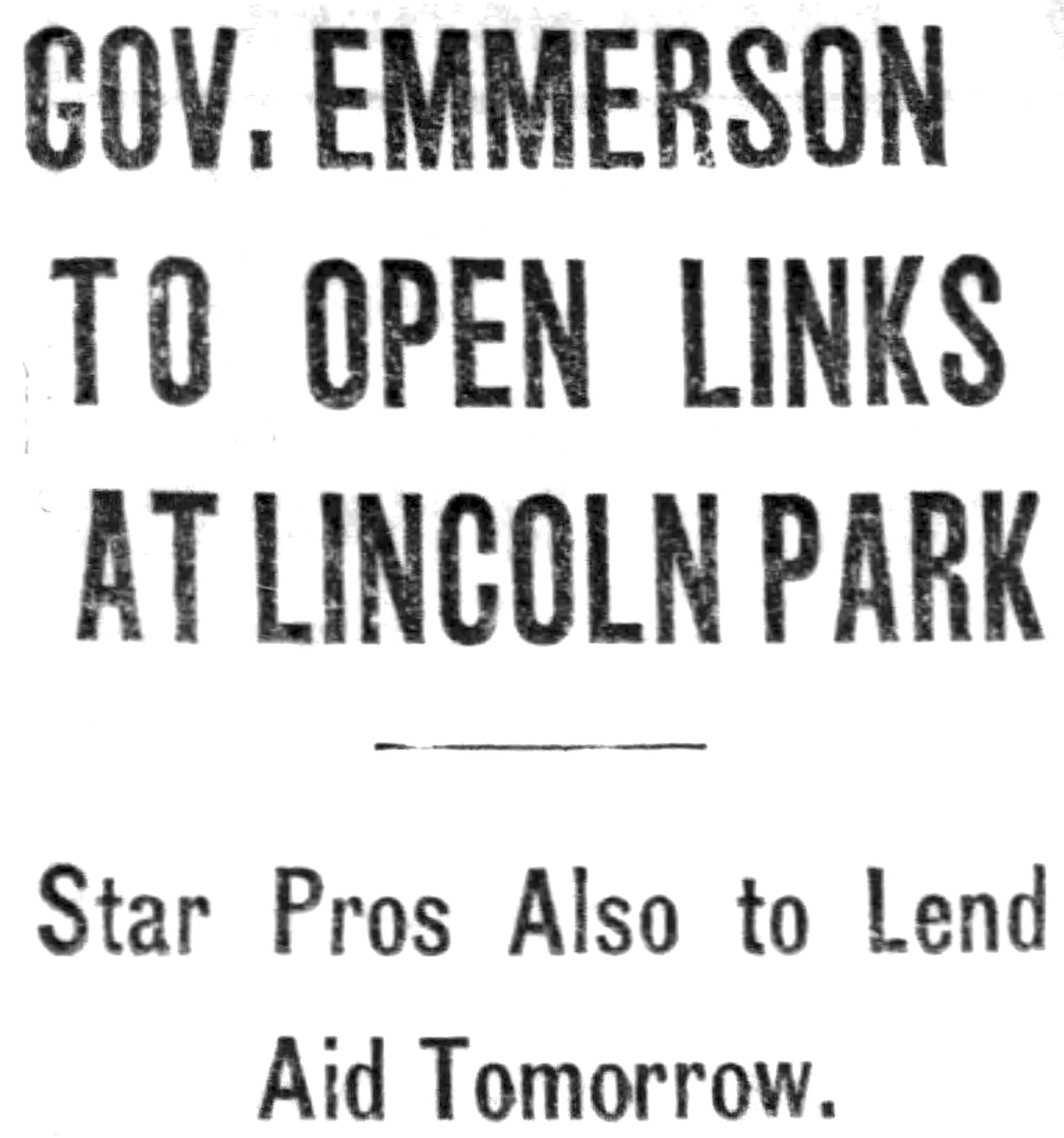 A new member will join Chicago’s public links family tomorrow with the opening of Lincoln Park’s new nine hole course. The new field and clubhouse, at the foot of Waveland avenue, also will be opened during the dedicatory exercises. Gov. Louis L. Emmerson will drive the first ball as a member of a foursome of officials, which include Warren Wright, president of the Lincoln Park board. The course will be opened for public use at 5 o’clock Saturday morning.

Following the opening foursome around the course tomorrow will be a quartet of local stars, including Chick Evans of Edgewater, Harry Cooper of Glen Oak, Jock Hutchinson of Glen View, and Laurie Ayton of Evanston. After these will come a foursome of Mrs. Lillian Zech, city parks champion; Marjorie Rosslein, Lincoln park titleholder; Mrs. Ness Cooper, state parks champion, and Tillie Langer, a former Lincoln park champion. A foursome of park commissioners and another quartet, including four Lincoln park stars, also will try out the new course.

First Course Open in 19181
The first nine hole course at Lincoln park opened in 1918 and last year attracted 120,000 players. The new one, which extends from Waveland to Montrose avenues, is laid out on 71 acres of made land. It was completed at an approximate cost of $25,000 an acre, which includes the reclamation of the land. Funds for its construction, which has taken three years, were authorized by the state legislature. The yardage by holes follows:

The course is 3,285 yards long. Par for its nine holes follows:

Reservations Are Available
Nonreservation fees on the course will be 25 cents a nine hole round. Reservations may be made up to a week in advance of the time of play for 50 cents. 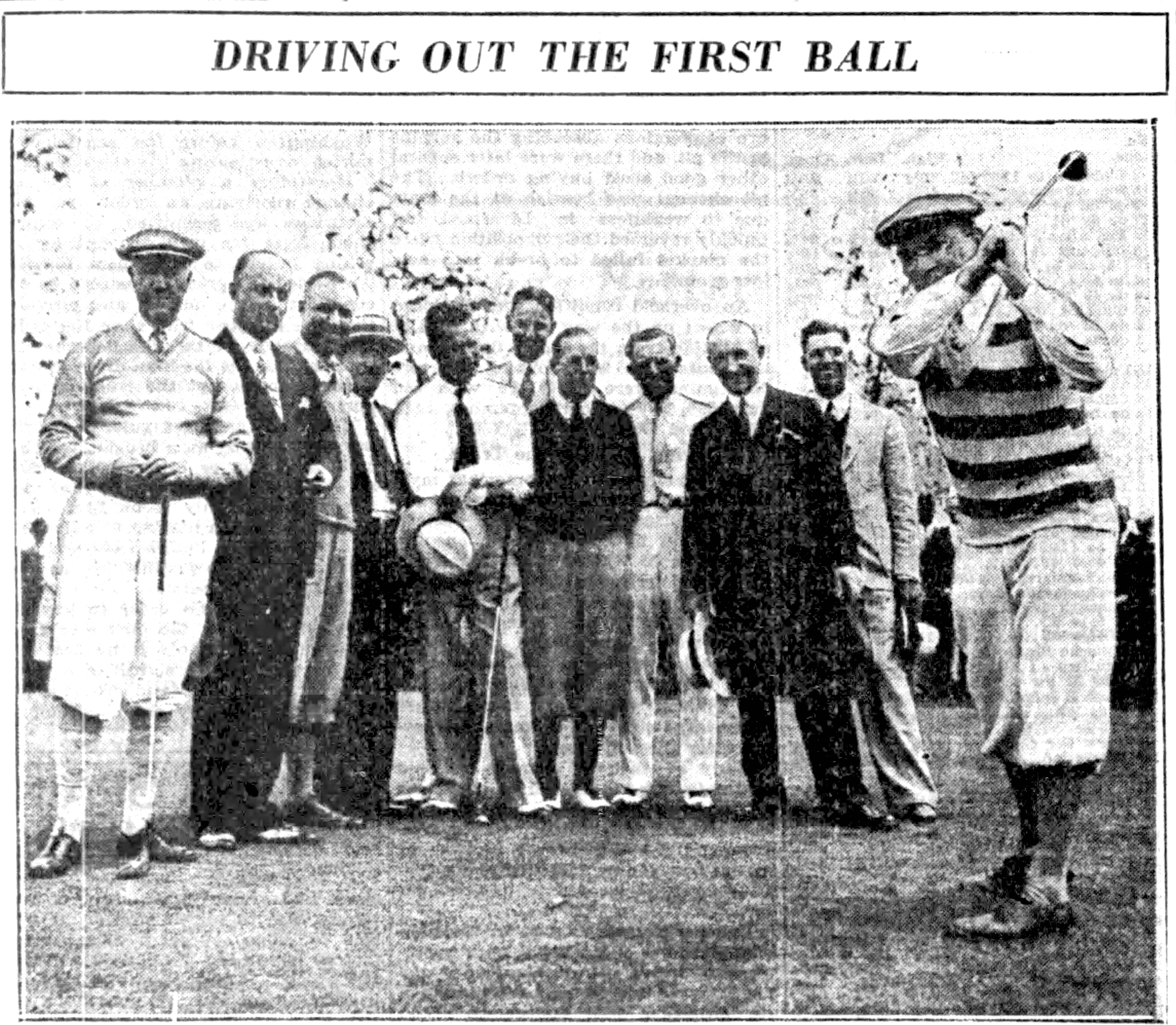 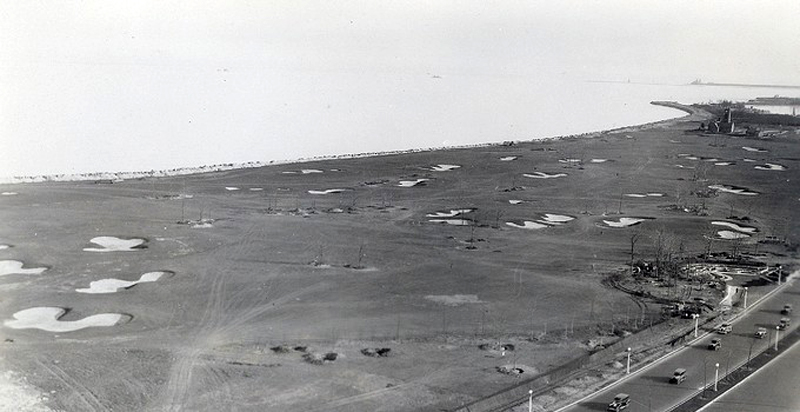 Jesse Madison, who will be replaced next month as head of the Chicago Park District, proposed Friday that Waveland Park Golf Course, at 3700 north at Lake Michigan, be renamed Sydney R. Marovitz Golf Course. Marovitz, who died one year ago this month, was a private Loop attorney who served on the park board from 1974 to 1986 and the father of state Sen. William Marovitz (D-Chicago). Madison said he offered the proposal as a courtesy. “He did an excellent job as a commissioner of the Park District,” Madison said after a park board meeting in the Marquette Park Field House, 6700 S. Kedzie ave.

The proposal was sent to committe.

Madison will be replaced by Robert Penn, a New York consultant.

Waveland golf course will formally change its name to the Sydney R. Marovitz Golf Course at a noon ceremony Monday, The dedication will be at the first tee of the course in Lincoln Park near Irving Park Road. Marovitz, the late father of State Sen. William Maroitz and brother of Judge Abraham Lincoln Marovitz, served on the board of the Chicago Park District from 1974-1986.

1 This date is in error as the Lincoln Park Golf Course opened un 1916.