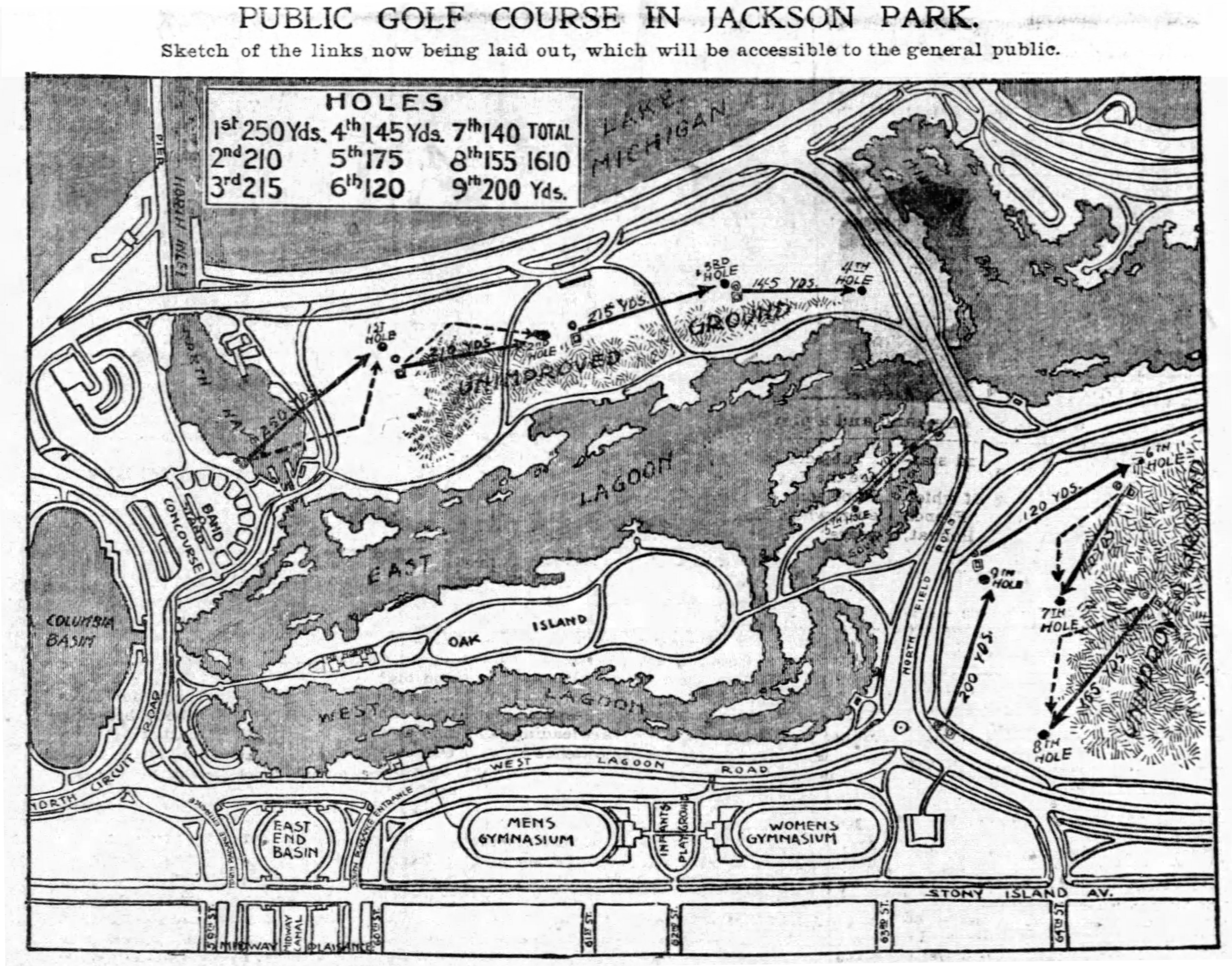 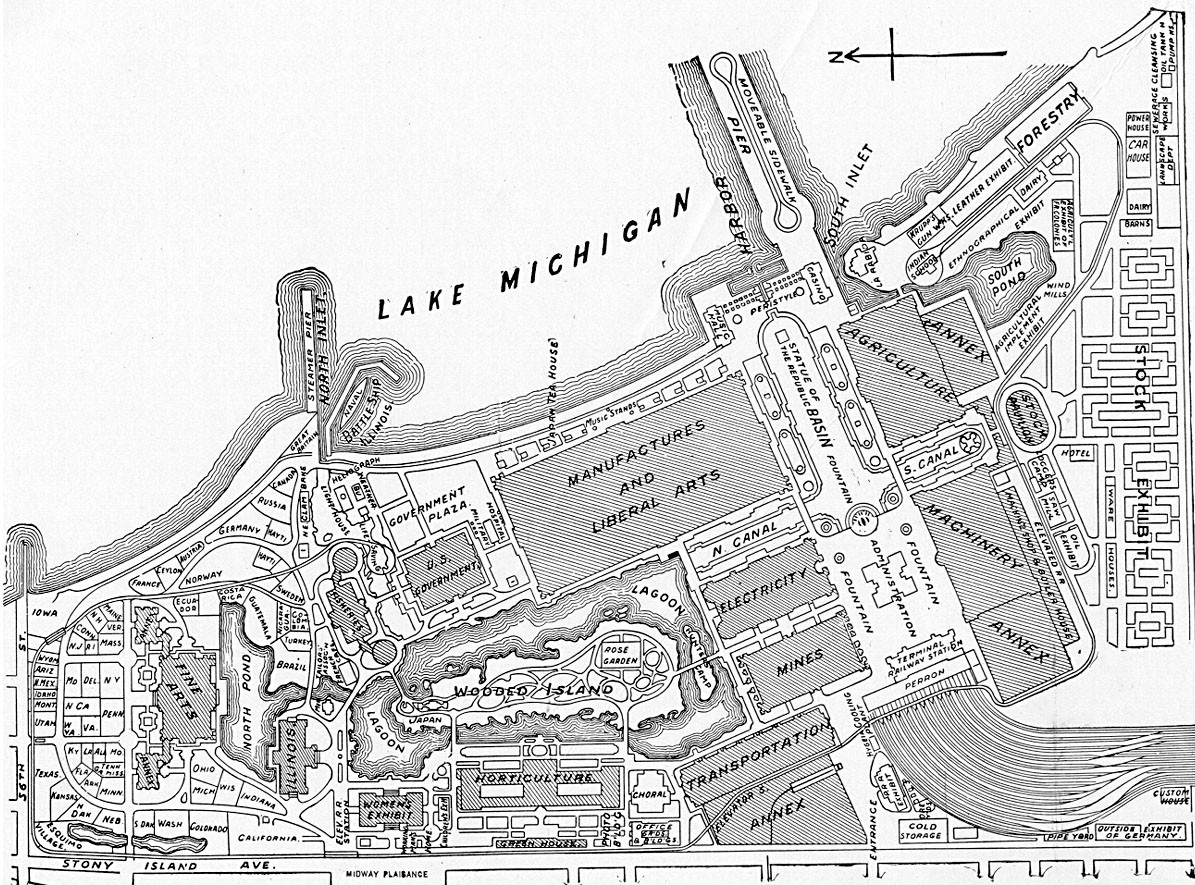 The Plan of the Fair

For a long time past South Side golf enthusiasts have been dreaming of that happy morning when they should awake to find a golf course at a distance of less than twenty to thirty miles from homes. Through the cooperation of the South Park Commissioners this dream Is soon to be realized. Within a short time there will be a publio link at Jackson Park, accessible to aU.

Hitherto Washington Park club course the only one within easy distance from the city on the South Slde, and, in order to play there, one had to a member of the Washington Park clUb. The tastes of the true golfer are and inexpensive, and it has been the regret of many of those golfers who learned the game in Scotland. that hitherto a man in Chicago, In order to play golf, had to have a substantial bank account. An impression has gradually formed in the minds of many as to golf being a “silk-stocking” game, an idea bred and fostered no doubt by reading in the newspapers from time to time of the social functions which tako place at the varIous clubhouse. It la quite a mistaken idea. To prove the truth of this statement one has only to go to Scotland, the stronghold and home of the game, and there one finds the artIsan and. wage-worker hurrying out on a Saturday afternoon to take advantage of the free golf courses in the public parks.

South Side golfers have been looking for a year or two with longing eyes on Jackson Park, and this spring, it was determined to bring the matter to the attention of the commissioners. A week or two Park Superintendent Foster was approached on the subject and the for making a public golf course brought to his . He at onco agreed to give the matter his early consideration. As a result of these negotiations, Superintendent Foster met a few of the enthusiasts some days ago and accompanied them over the proposed nine hole course. The Superintendont was quite favorably impressed, and saw no reason why the game should not be played over the course as mapped out. After a conference with the commissioners, he decided to go ahead at once with the making of the course and it is expected that in about two weeks golfers living in the city will be able to play over the first free golf course in the West. It is hoped that the public will take full advantage of this opportunity afforded them by the kindness or the South Park and Superintendent Foster.

A sketch of the course, as it is at present being laid out, and a description of the various boles, and their distance, will undoubtedly prove of interest.

First hole—The teeing ground for this hole is on an eminence immedIately north of the canal which leads from the lagoon to the lake, between the German Building and the life-saving station. The canal Is at its narrowest point right in front of the teeing ground, and a carry of thirty yards will take the unambitious player across. Driving towards the hole, a carry of sixty yards, will be necessary to clear the water, and reach good ground. At present the ground immediately on the south side of the canal is rough and weed grown, but a strip fifty yards wide is to be cleared of weeds and leveled in the direction of the hole. A foot bridge across the canal is to be erected for the use of players. The first four putting greens are all located on the strip of fine turf running south from the life-saving station to the caravals, parallel with the lake shore driveway.

Second hole—The teeing ground is on the immediate edge of the ground lying between the shore driveway and the lagoon. Fifty-five yards from the tee is a patch of rough, weed grown ground lies right in the line of play. A clean drive of ninety yards carries the player over this difficulty, or if the player chooses, he may drive off towards the left, and keep clear of the rough ground altogether. A gravel walk crosses the turf 168 yards out in a direct line. A clear carry of 170 yards from the tee direct to the hole leaves the player with no further difficulties to negotiate. A “sliced” drive from the second, third, or fourth teeing grounds is severely punished by the unimproved weed grown ground lying immediately the right.

Third hole—The only difficulty to be avoided in playing this hole is a gravel walk, which crosses the course 114 yards from the tee.

Fourth holee—No difficulty is encountered In playing, except in a “sliced” tee shot. The putting green Is on a nice, gentle slope,

Fifth hole—This hole is beset with difficulties. The teeing ground is on an eminence immediately northwest of the driveway bridge. The hole is situated on an island, and the water to be carried over In the drive is twenty yards wide. A clean carry of forty-five yards brings the player to a small strip of safe ground. This strip is only ten yards wide, and extends for about thirty yards in the direction of the hole. The shape of the strip is that of a hog’s back, so that a ball must land dead on it, or it will run down into one side or the other. A clean drive. at eighty to ninety yards carries the players to safe ground, as the island widens out considerably at about that distance from the tee. The putting green is on a slope. A foot bridge across the water is to be erected for the use of golfers.

Sixth hole—This is a short hole an4 has no difficulty if a player keeps the line, gauges tho length of his shot accurately. Should he “pull” his drive or put a little too much strength into it punishment awaits him.

Seventh hole—A clean drive over the unimproved ground carries the player to the. green. A safe course to the hole is indicated by the dotted line, for the player who mistrusts his driving capabilities.

Eighth hole—Here, again, as at the seventh, a clean drive surmounts all difficulties. A safety course, for this hole also, is indicated by the dotted line. At both the seventh and eighth grounds a “pulled” balI suffers heavy punishment.

Ninth hole—A gravel walk lies immediately in front of the teeing ground, but Is about the only difficulty, provided a player keeps fairly wall to the line. 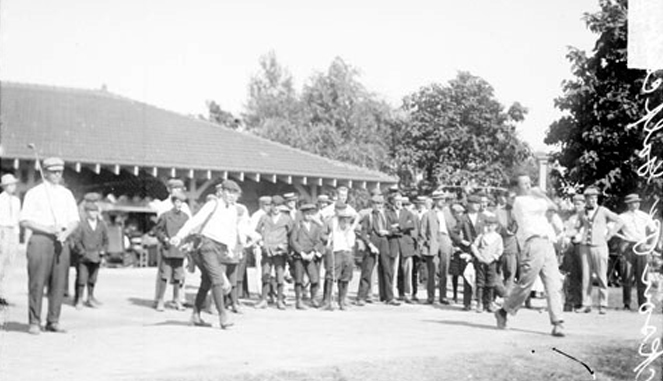