After three years of waiting, Serge Prokofieff’s, “The Love for Three Oranges,” the one novelty that the Chicago Opera Association will produce this year, reached performance at the Auditorium last night.

He would seem to have been responsible for most of the opera, from the angle of hearing. He rote the libretto after a fairy tale by Carlo Gozzi, then composed the music, put in much time in its rehearsals, and finally conducted its first performance on any stage last night.

From the angle of vision another Another Russian is responsible. Boris Anisfeld composed the scenery. And before going any further let me express a conviction that never was paint applied to scene cloth any more lavishly or gorgeously. All the “Follies” and “Kismets” and “Chu-Chin-Chows” and “Meccas” rolled into one would hardly equal what you may see in the two hours and thirty-five minutes of this performance. 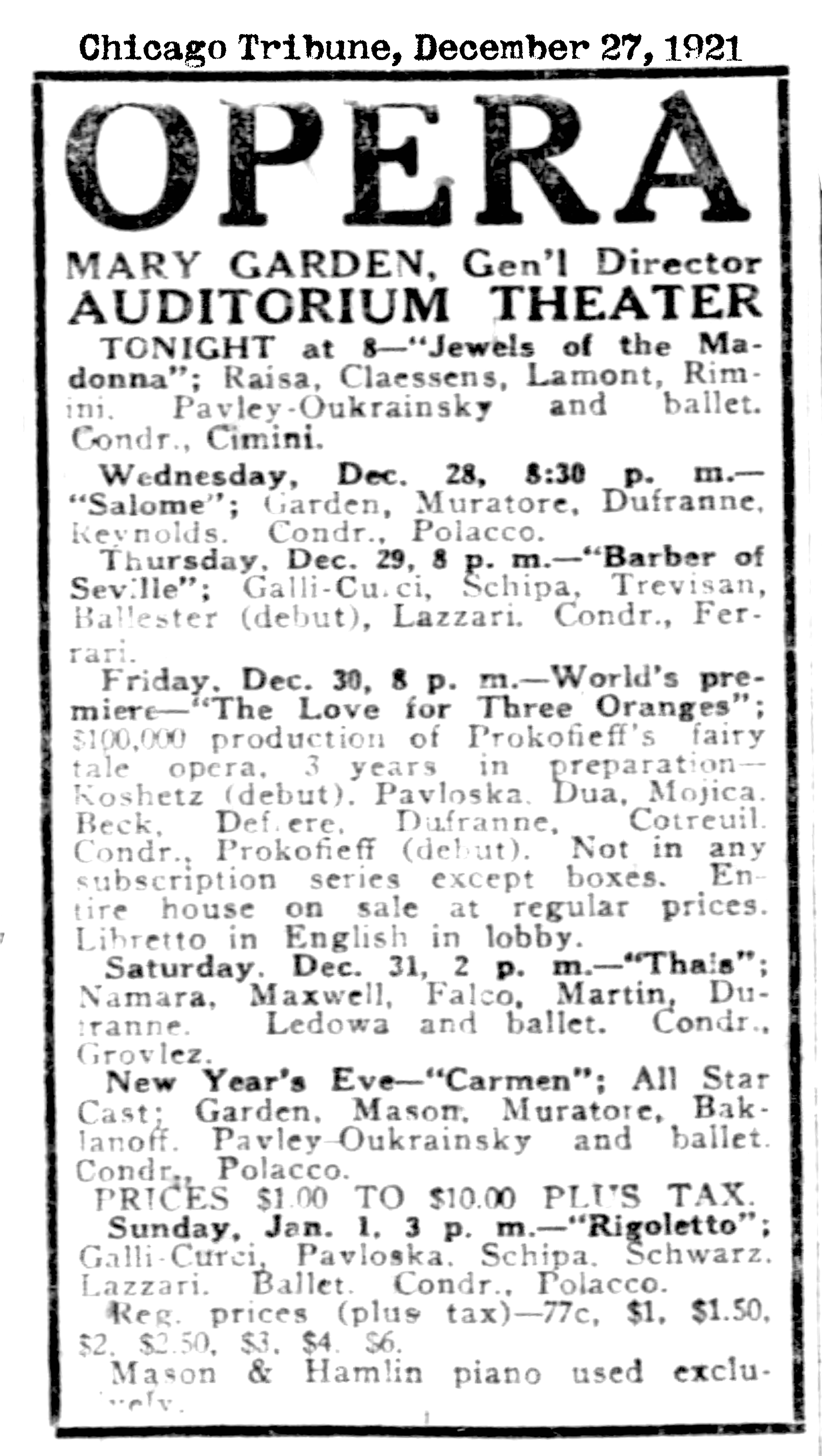 “The Love for Three Oranges” is a comic burlesque of fairy tales, a sort of “Alice in Wonderland” done in terms of gigantic, exotic imaginings. The unfortunate part of it is that if you are going ton appreciate Mr. Prokofieff’s part of the proceedings, you will have to study with the Red Queen and learn how to believe six impossible things before breakfast.

It might be a good thing toi start the children, the coming generation, on this work. At any rate they would love the story. The music, I fear, is too much for this generation. After intensive study and close observation, at rehearsal and performance, I detected the beginnings of two tunes, One is a very good march played by the orchestra. The other is a wee bit of a male chorus sung just before the final scene. For the rest of it, Mr. Prokofieff might as well have loaded up a shotgun with several thousand notes of varying lengths and discharged them against the side of a blank wall.

“Quel désastre!” sang Desiré Defrere at the end of the second act.

“Yes,” said a member of the audience, reaching for his hat and coat, “what a disaster!” And he forthwith left the Auditorium.

But it may not be as bad as that. Last night’s audience did not seem to think so. They called the librettist-composer-conductor before the curtain at the end of act, sometimes with the cast, sometimes with Mr. Anisfeld, once with Jacques Coini, the stage director, who has, with all the rest, worked like a Trojan to get the performance in readiness. There were others quite as deserving of curtain calls, aming others, E.H. Moore, the chief electrician, who worked a bit of color magic with lights, and Harry W. Beatty, the technical director. They had a herculean task, and they performed it.

As to the cast, each individual is entitled to a special mark of credit, not only for learning the music but for being so good at the end. There was José Mojica, as the prince; and Edouard Cotreuil. There was Nina Koshetz, making a debut and proving conclusively that by all merit she is entitled to many larger things.

Opera by Edward Moore
The single novelty of the season, “The Love for Three Oranges,” costing so they say at the Auditorium, $80,000 for rehearsals, has come, had its two performances, and gone. It may be tried out during the New York run of the company. After that it will probably go back into the storehouse with the other operatic experiments.

Its chief value was to demonstrate that the Chicago Opera association has some good comedians in its ranks, a matter concerning which there was no argument before. Mr. Prokofieff’s two tunelet melodies were not enough to give any of the cast much of a demonstration on singing ability. James Wolf had a few sustained notes and Irene Pavloska, a few more, but, again, there was no argument on them.

But those who went to the performance found much entertainment in Octave Dua’s light hearted absurdities as Trouffaldino; in antics equally absurd through being so profoundly lugubrious on the part of Desiré Defrere; in the fearful royal dignity of Edouard Cotreuil, and in the scene where José Mojica, the prince, was first roused out of his melancholy into laughter.

There was also cause for regret that Rimsky-Korsakoff’s “Snegourotchka” was tossed overboard in midseason to make room for other cargoes. If it had gone through Nina Koshetz would have had an important role in it, and her few notes in “Oranges” were enough to arouse expectations. Also the Rimsky-Korakoff work is full of tunes.