ONE of the most important civic developments of the year 1922 in Chicago is the organization of our Civic Opera Company. With a larger proportion of the public actively interested as a result, the opera is contributing more to the artistic life of the city, and, at present to the festivities and joy of the holiday season, than ever before in its entire history.

The first season of Civic Opera opened at the Auditorium, November 13th, with a gala performance of Verdi’s “Aida,” which has been followed by a succession of brilliant performances of the finest operas suitable for the stars and the equipment available, that the management could select.

The new guarantee policy insures the future of grand opera here for at least five years to come. Chicago’s opera institution is now in the third stage of its history. Twelve years ago the Chicago Grand Opera Company was organized, this incorporation lasting from 1910 to 1915. A change took place in 1915, and from then on, until this year, the company was known as the Chicago Opera Association, and was backed by a small coterie of wealthy citizens upon whose generosity and inclination the enterprise depended for funds to make up the large yearly deficits. This year the Chicago Civic Opera Company was formed with a new guarantee arrangement which places the sponsorship with 2,200 public-spirited men and women, virtually creating a board of directors consisting of these 2,200 guarantors, each of whom has pledged some stated amount per year for five years, the total aggregating over $500,000 a year. So large a group of citizens sharing the responsibility makes the production of opera here a truly civic enterprise. This is a healthier state of affairs than when a very small group of wealthy persons shouldered the entire burden. The large representative partnership is expected to make the opera self-supporting in a few years as it will doubtlessly lead to more economic management, and the yearly deficit which heretofore always presented a serious problem, will be eliminated. 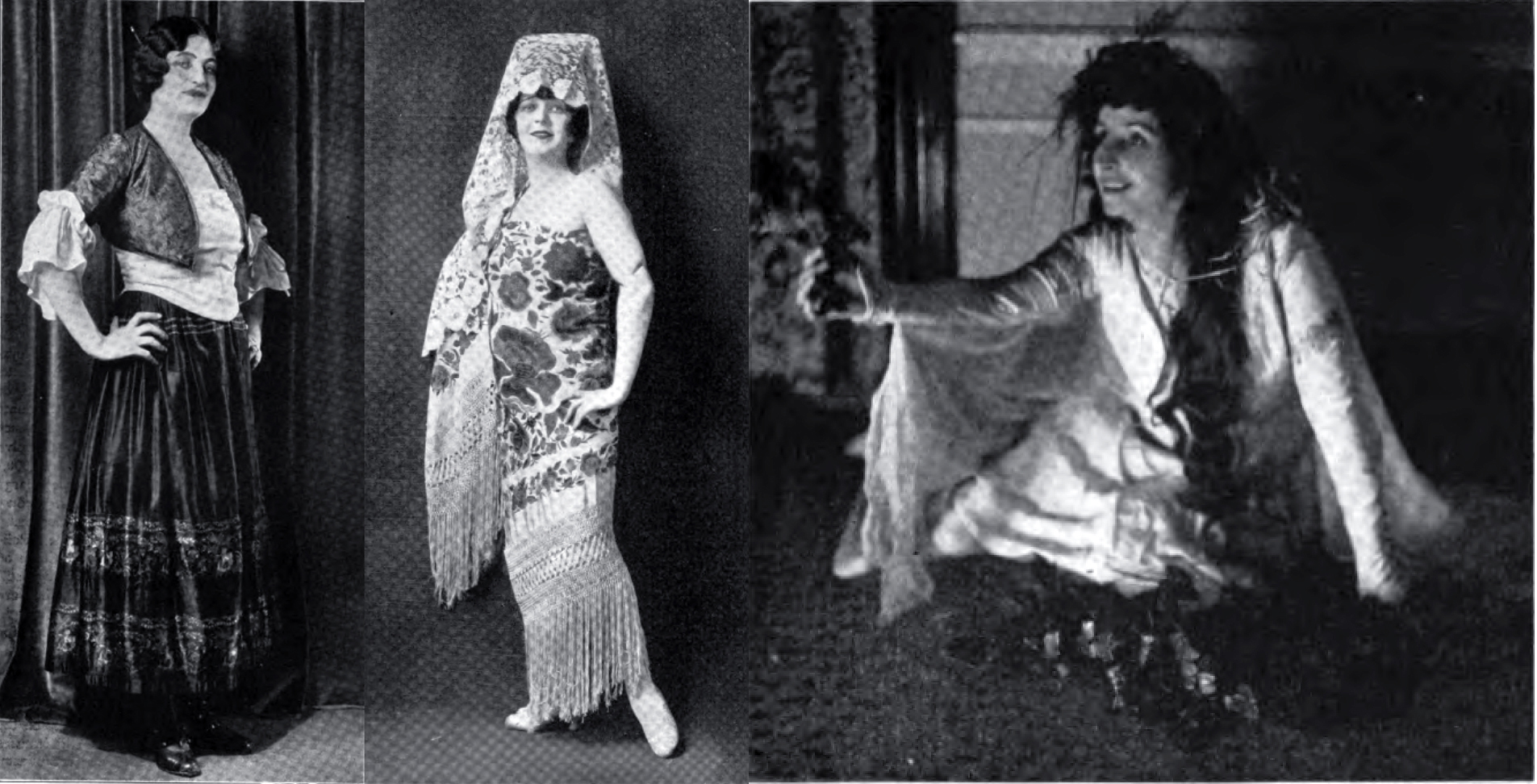 LEFT: Rosa Raina as Maliella in “The Jewel of the Madonna”
CENTER: Ina Bourskaya, the Russian Prima Donna, in “Carmen”
RIGHT: Amelita Galli-Curci in “Dinorah.”

The newly adopted policy of management has taken into account the costs and methods employed in previous seasons in making up the budget and planning the repertoire, and is instituting certain changes. For instance, artists are being engaged for a stated number of performances only, which does away with the costly item of “dead time,” in other words, performances paid for according to contract in excess of actual appearances made by the artists. Here alone is a big saving. The management which has formed this wise and business-like policy consists of Samuel Insull, president; Charles G. Dawes, and Richard T. Crane, Jr., vice-presidents; Charles L. Hutchinson, treasurer: and Stanley Field, secretary; foremost Chicago citizens of rare executive and business ability. The company is exceedingly fortunate in having these far seeing and experienced men at the helm, exercising their power and influence to make the opera here a permanent activity and to keep it on a high artistic plane.

The actual business management is in the hands of Clark A. Shaw, a veteran in this work, and an unusually capable executive. Giorgio Polacco, whose musicianship and talent for organization are world renowned, is in charge of the musical and artistic management.

The revenue for the maintenance of grand opera in Chicago is secured through the box office from four different groups of patrons:

(1) the ‘regular season seat subscribers;
(2) the coupon book holders;
(3) the box holders;
(4) those who purchase tickets for individual performances.

The management was able to announce at the start of the season that the advance sales of subscriptions, coupon books and boxes had topped last year’s high water mark by the large sum of $82.586.89. Strangely enough the increased sale is in the more expensive seats. Those who have held balcony seats in the past show a decided tendency to move to lower sections of the balcony, or to the main floor, while manypurchasers of gallery tickets want balcony seats this year. This results in a large number of the less expensive seats remaining unsubscribed, and therefore obtainable in the general sale of tickets for single performances. 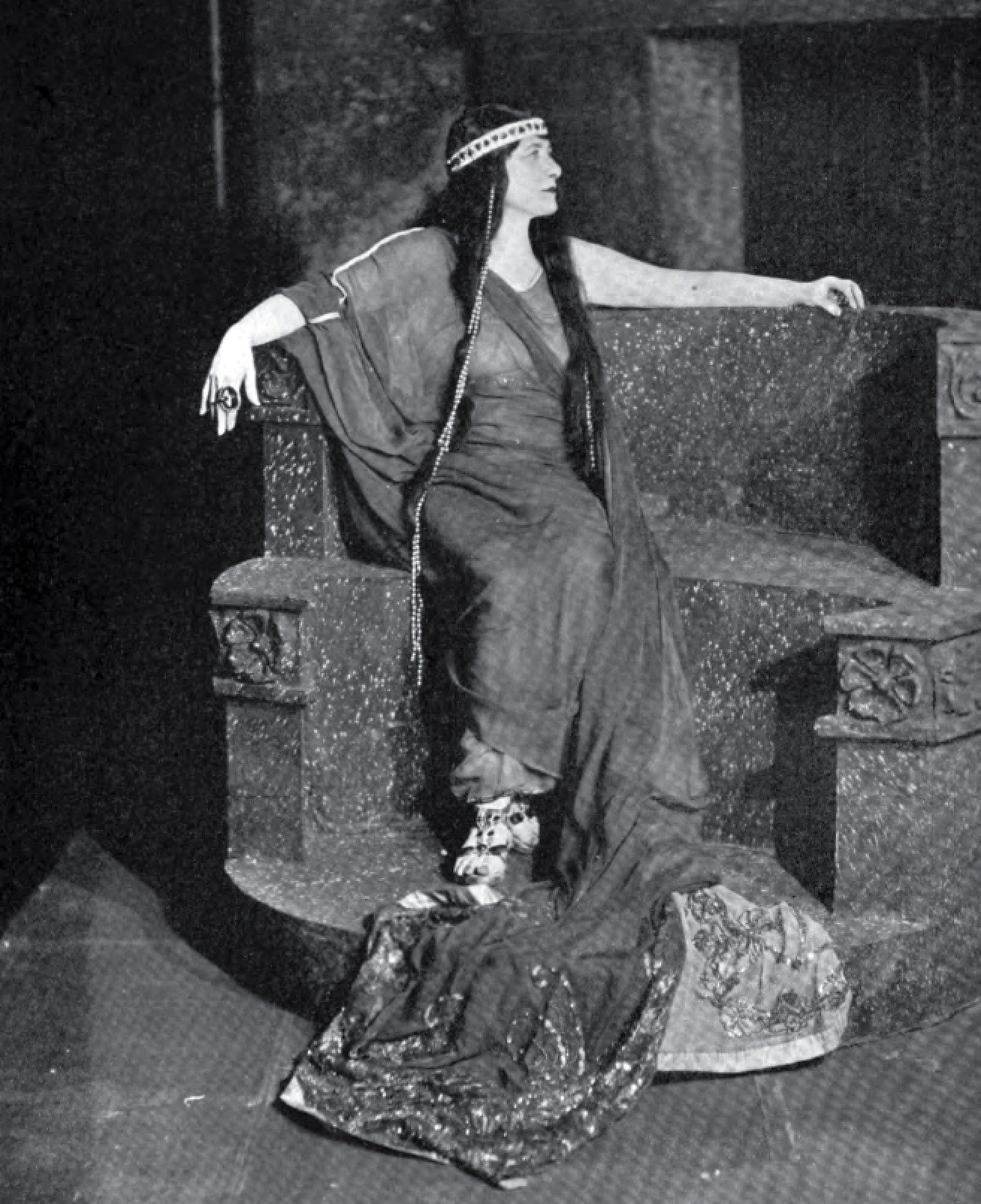 Mary Garden as Fiora in “The Love of Three Kings”

An unsurpassed group of opera stars has been assembled for the season, including some world famous artists entirely new to Chicago audiences. Among the members of the company who were here in past years and who have been retained this season are the following stars:

Now about the new singers, who perhaps represent the most note worthy aggregation assembled by an American opera company at one time in three or four decades. Of the new sopranos, an outstanding figure is Claudia Muzio, the Metropolitan star. She is not exactly a stranger here in opera, for she was a great favorite at Ravinia three or four years ago. Melvena Pass more is a beautiful American girl coming into prominence on the operatic stage. Grace Holst comes from the Royal Copenhagen Opera, and is a native of Norway. Among the mezzo-sopranos, is one of the most brilliant figures of all the newcomers, Ina Bourskaya, the young Russian prima donna who was receiVed so enthusiastically ‘when she originally appeared here last spring with the Russian opera company touring the world. Her recent interpretation of “Carmen” has won her still greater recognition here. Kathryn Browne, an unusually versatile American singer, is another new mezzo-soprano. The Italian tenor, Angelo Minghetti has enjoyed a wide reputation in Europe. The new baritone, Cesare Formichi scored a big success as Scarpia in “Tosca.” Milo Luka and Mark Oster are other baritones appearing here for the first time. The new bassos include two celebrated Russians, Feodor Chaliapin and Ivan Steschenko, and Herbert Gould, a Chicagoan.

The ballet this year is in the capable hands of Adolph Bolm, the eminent Russian master of the dance. Associated with him as premiere danseuse is Anna Ludmila, a Chicago girl born and educated here, who has won distinction in ballet work.

This season’s repertoire, as established so far includes three operas practically new to Chicago; “The Snow Maiden” (Sniegurotchka) by Rimsky-Korsakov, “The Jewess” (La Juive) by Halevy, and “The Force of Destiny” (La Forza del Destino) by Verdi. Seven other operas—Wagner’s “Parsifal” and “The Valkyrie” (Die Walkuere), Humperdinck’s “The King’s Children” (Die Koenigskinder) and “Hansel and Gretel,” Flotow’s “Martha,” Victor Herbert’s “Natoma,” and Giordano’s “Andrea Chenier”—are all welcome and interesting revivals of operas which have not been presented in Chicago for a long time. The twenty or more other productions to be offered in the ten—week season are all established favorites of the repertoire of recent seasons. 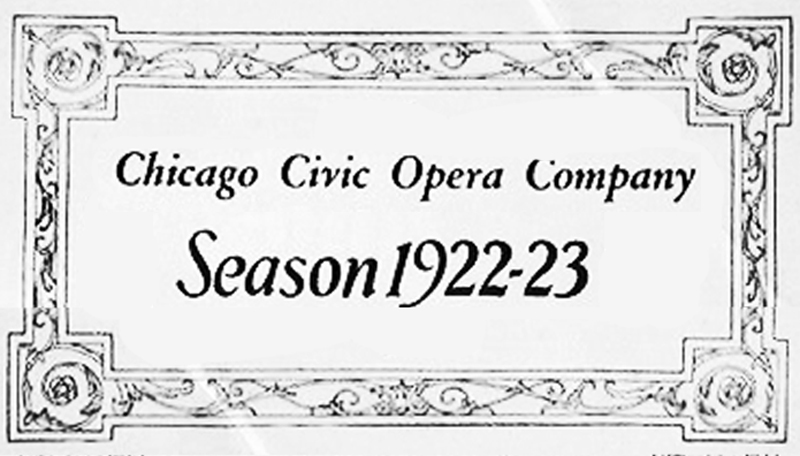 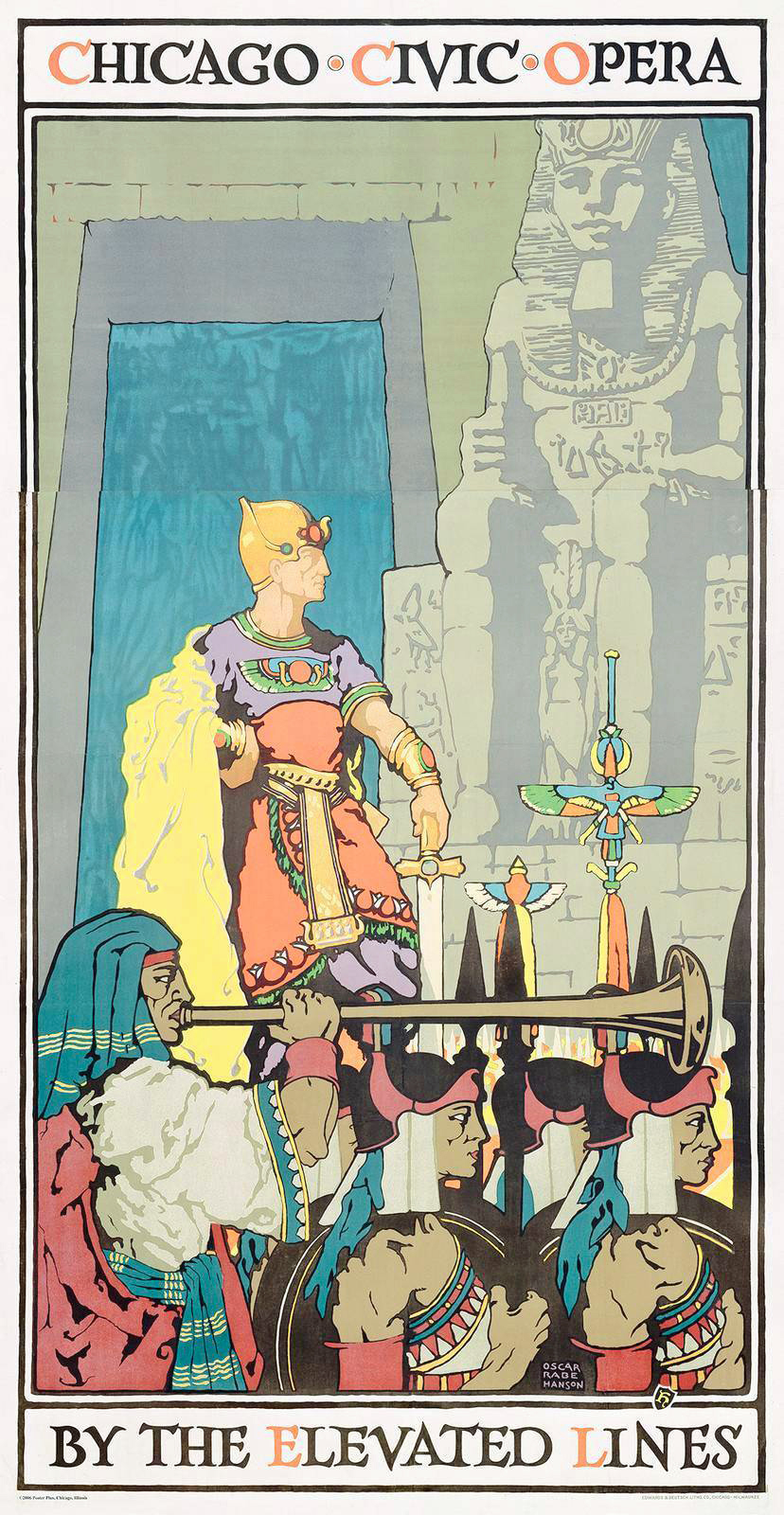