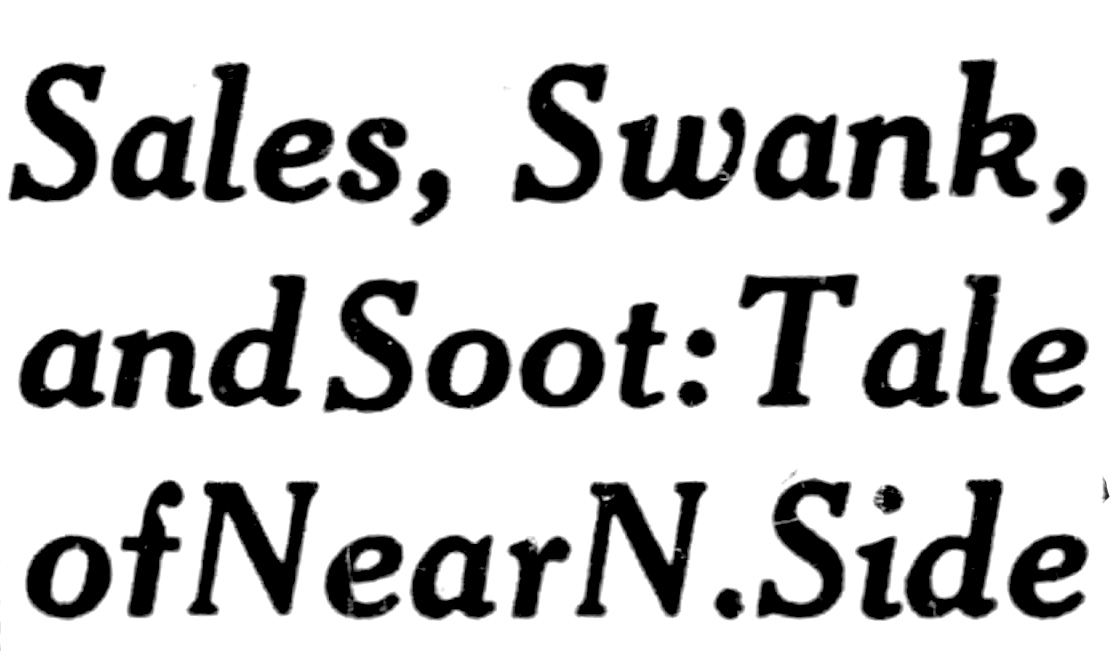 By Gladys Priddy
Years ago you could live in Kilgubbin or the Patch and be in the very same place all of the time.

You could call home Swede Town, Shantytown (The Sands), the “Fifty Acres,” Smoky Hollow, the Gold Coast, Streeterville, or Little Hell—and you’d still be on the Near North Side.

All of these communities and more are part of the area set off from Chicago’s 74 other communities by the main and north channels of the Chicago river, North av., and the lake. Boundaries, as set by the United States census bureau are outlined in the Local Community Fact Book for Chicago 1950, source material in this article. The book is a publication of the Chicago Community Inventory, University of Chicago.

Bridges Attract Industry.
Near North Side qualifies as an old settler in the city’s family of communities included in 1837 at the city’s incorporation. Homes, great and small, and industries were being built in the area practically from the beginning.

Bridges built over the river at Rush st. in 1856 and at Erie st. and Grand av. the next year attracted several large industries, however, including the McCormick Reaper works. Thousands of small frame cottages, homes of workingmen, were built, especially west of Wells st. Between Michigan av. and the lake was the Sands or Shantytown, a district of wooden buildings which underwent raiding and burning late in the 1850s.

The 1860 population was 29,922, including many Irish and German immigrants. The Irish settled along the river as far east as State st. in Kilgubbin or the Patch. The Germans lived in small frame cottages and did truck gardening north of Chicago av. and east of Clark st. In the 1850s, Swedes settled between Grand av., Erie and Orleans sts. and the river; this was Swede Town.

Three Miles Around.
Pattern of settlement was simple; in three parts, it was transportation, work, and workers. Horse car lines began in 1859, the north side system starting at the river and following Clark st. Plants and factories expanded north along the river. More workers moved into the area’s frame cottages now often being built two to a lot.

In 1864, Chicago was built up solidly for 3 miles in every direction.

The wealthy had begun moving south. Near North Side was becoming increasingly surrounded by factories and slms. From 1862 to 1870, the population doubled, from 35,000 to 70,000. And business built up along the car lines.

Then the fire of 1871 wiped out everything.

Near North Side needed a year to catch its breath, and then rebuilding proceeded along the already established pattern. Exception was some Irish who couldn’t comply with new regulations so went north of Chicago av. to the “Fifty Acres” to build cheap wooden structures along the river to North av.

Introduce Cable Cars.
The North Western railway in the 1890s laid track along the north branch and the resultant railroad and factory smoke gave the river front district another name—Smoky Hollow.

When Potter Palmer filled in marsh land and built himself a mansion in 1882 (the landmark was razed four years ago for the present 22 story twin tower apartment at 1350 Lake Shore dr.), society began deserting the west and south sides and moving north again (reversing the trens of 20 years). By 1893, near North Side had a fashionable section of three story mansions, and seven years later, Palmer was putting expensive apartments on the drive.

While Palmer was developing Lake Shore dr., George Wellington Streeter in 1886 claimed the lake front north of the mouth of the river by squatter’s rights. Litigation went on for years over what Streeter called the “Deestrict of Lake Michigan,” and that is how the Near North Side east of Michigan av. came to be called Streeterville.

Another section was getting a name, too—in the 1880s and 1890s the part of Wells st. was becoming a blighted area into which more and more Swedes were moving—tho there were plenty of Irish left—and it became “Little Hell.”

Convert to Studios.
Residentially, the 1900-1920 period saw the old areas of homes near the Loop converted to warehouse and wholesale house use. Clark st., where business had bloomed along the horse car line, was becoming a street of hotels, second hand stores, and places of entertainment. Industry was pushing north and east from the river. Houses that survived razing for factories or stores were converted to rooming houses.

Towertown came to be the name of an area around Chicago av. where the houses were converted to studios. New mansions were built on Lake Shore dr. from Bellevue pl. to Lincoln park—but the blight west of Wells st. had spread its contaminating fingers to North av.

Also, the Italians were moving in on the Irish and Swedes between Sedgwick st. and the riverside industrial fringe—coming so fast that by 1920, “Little Sicily,” bounded by Chicago av., Orleans, Larrabee, and Division sts., was the most densely populated Italian district in Chicago.

Negroes and Persians began moving into Near North Side in 1900. Later on Greeks came.

The Town and Garden apartments, built in 1928, and the Chicago housing authority’s Frances Cabrini homes put up in 1942 replaced depressed areas in the north central part of the community. However, blighted areas generally have deteriorated further and moved east.

Average Citizen is 35.
New building has gone on somewhat steadily, too. The Merchandise Mart, finished in 1930, flanked the southwest sector where factories and wholesale houses were penetrating the blight. High apartments have gone up in the northeast and in Streeterville. East of Michigan av. is Northwestern university’s growing Chicago campus and a center of hospitals.

7th in Retail Trade.
Yet, 70.5 per cent of the dwelling units was up before 1920. The community’s public assistance rate bears testimony to the humbleness of the west end, for 71.1 persons per 1,000 get some kind of public aid (31.2 is city-wide rate). High use of its residential areas is shown in the density of 35,800 persons per square mile, or more than twice the 17,200 city-wide distribution. The area of densest Negro settlement is west of La Salle st. between Chicago av. and Division st.

Window dressing for all of this is swank Michigan av. where the north end in 1948 ranked 7th among Chicago’s leading retail centers. And not to be forgotten are Rush st., Clark st., Chicago av., and State st. where business flourishes, sometimes in the form of places to eat, drink, and be entertained.

For Near North Side is whatever you seek—a place of healing, learning, pleasure, business . . . or just a place to live. 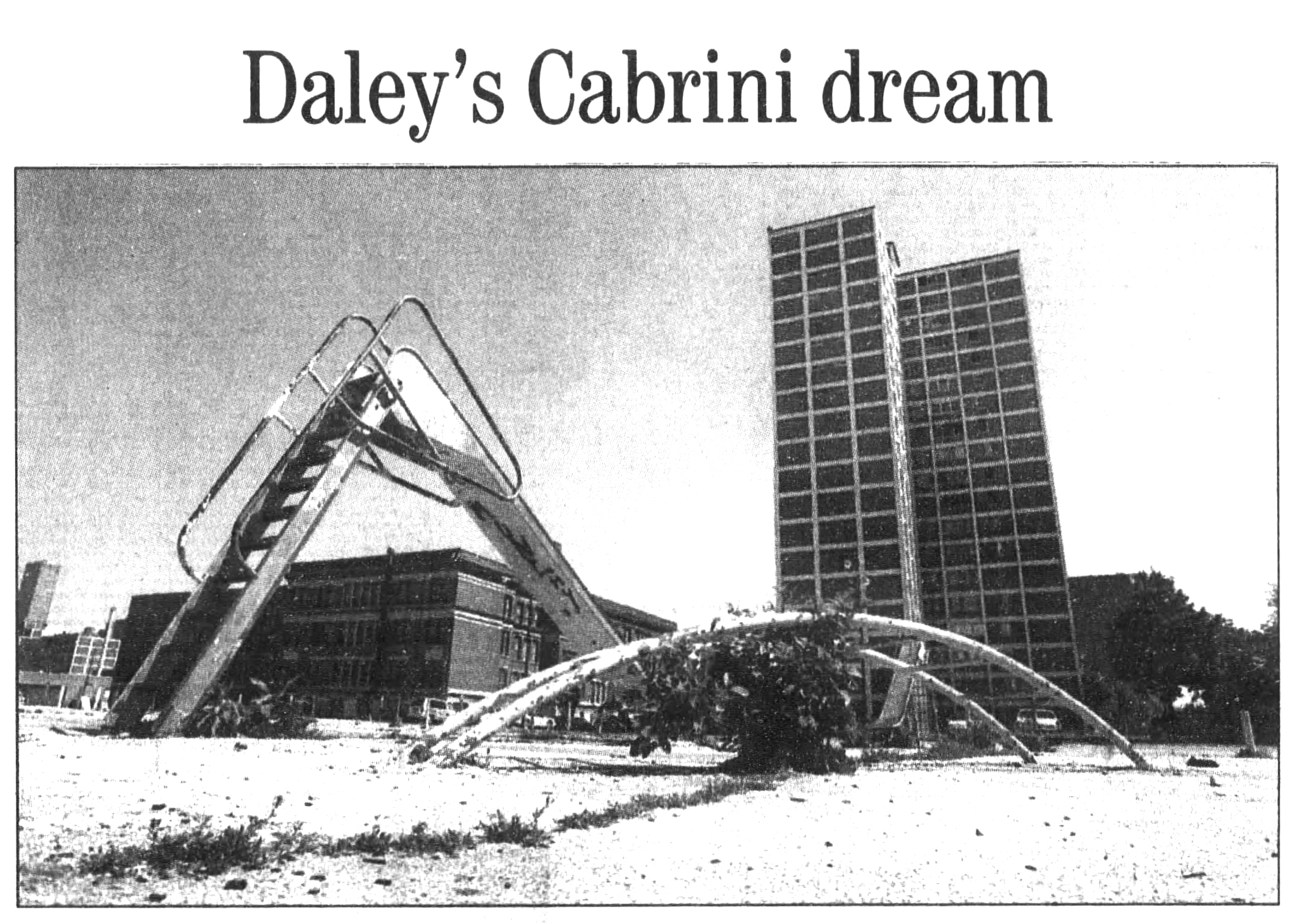 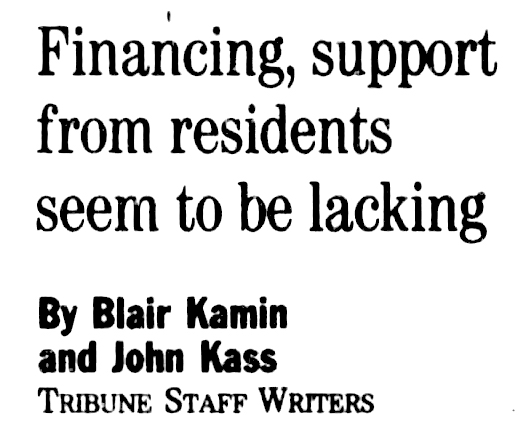 It had all the makings of a history-making announcement: bureaucrats and elected officials flanking Mayor Richard M. Daley, plus a color-coded map that allowed them to paint a rosy picture of transforming the notorious Cabrini-Green housing development into a thriving neighborhood.

But the framework for a new Cabrini, announced Thursday, at a City Hall news conference, still lacks essential touches if officials are to make good on a promise of better days for Cabrini, a national symbol of public housing woes.

Conspicuously absent from the stage on which Daley stood were Cabrini resident leaders, whose lawyer labeled Daley’s plan a blueprint for destroying their community. The project’s financing is vague; it took repeated questions from reporters until a Daley aide pulled a figure out of the air, tagging the cost at $1 billion.

Even the mayor warned not to expect miracles.

“It will not happen overnight,” Daley said. “Clearly there will be bumps in the road as we work through our differences.”

Those differences are strong, though Daley and CHA Executive Director Joseph Shuldiner assured that no Cabrini resident will be displaced. But Richard Wheelock, lawyer for the Cabrini-Green residents, called the plan “ethnic cleansing, Chicago style.”

“This is the land grab that the residents have been in fear of for years,” he said. “And it’s now coming to pass.”