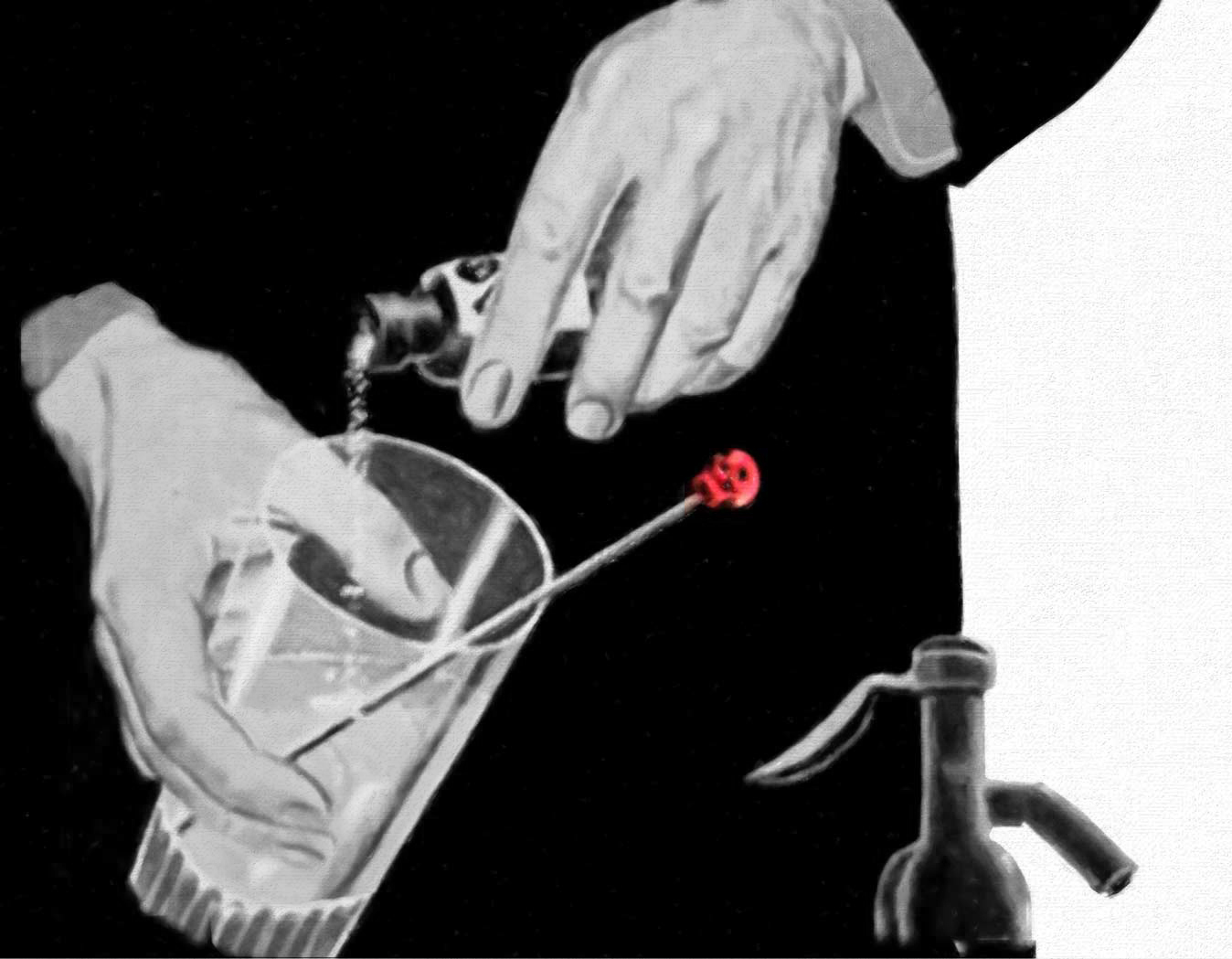 From 1896 to 1903 the Lone Star Saloon and Palm Garden was operating in what was known as Whiskey Row on State and Harrison streets. A small bartender would often sell to unsuspecting customers his “special drink” which consisted of raw alcohol and other unidentified powders that would put him in an unconscious state. The bartender would then rob the victim and dump him in an alley near the tavern. The name of the bartender? Mickey (Micky) Finn, of course.

In 1898, Mickey Finn met a mysterious voodoo priest named Dr. Hall, who made his living selling love potions and trinkets to the superstitious and uneducated folk of the red light district, and also supplying them with heroin and cocaine. From Dr. Hall, Finn purchased brown bottles filled with liquid and a white, powdery chemical detritus, which no one ever precisely identified, but which made Mickey Finn famous.

Like all saloon-keepers in the First Ward, Mickey Finn paid his protection money to the Aldermen/Vice lords Michael Kenna and John Coughlin, and he was convinced he would never be caught. But in 1903, the jig was up. Persistent reports of dopings at the Lone Star led the police to investigate the saloon more closely, and Gold Tooth Mary and some of the other house girls began to fear that one day, Finn would take their hard-earned savings.

But on December 16, 1903, Mayor Carter Harrison ordered the closure of the Lone Star Saloon, and Mickey Finn wisely left town shortly thereafter. But not before he sold the formula for his famous drink to a number of other Southside saloons, who marketed it as a “Mickey Finn,” or even just a “Mickey”. The name eventually came into use as a generic term for any knockout drink, and to “slip a mickey” into someone’s drink now means to secretly drug an unsuspecting victim. 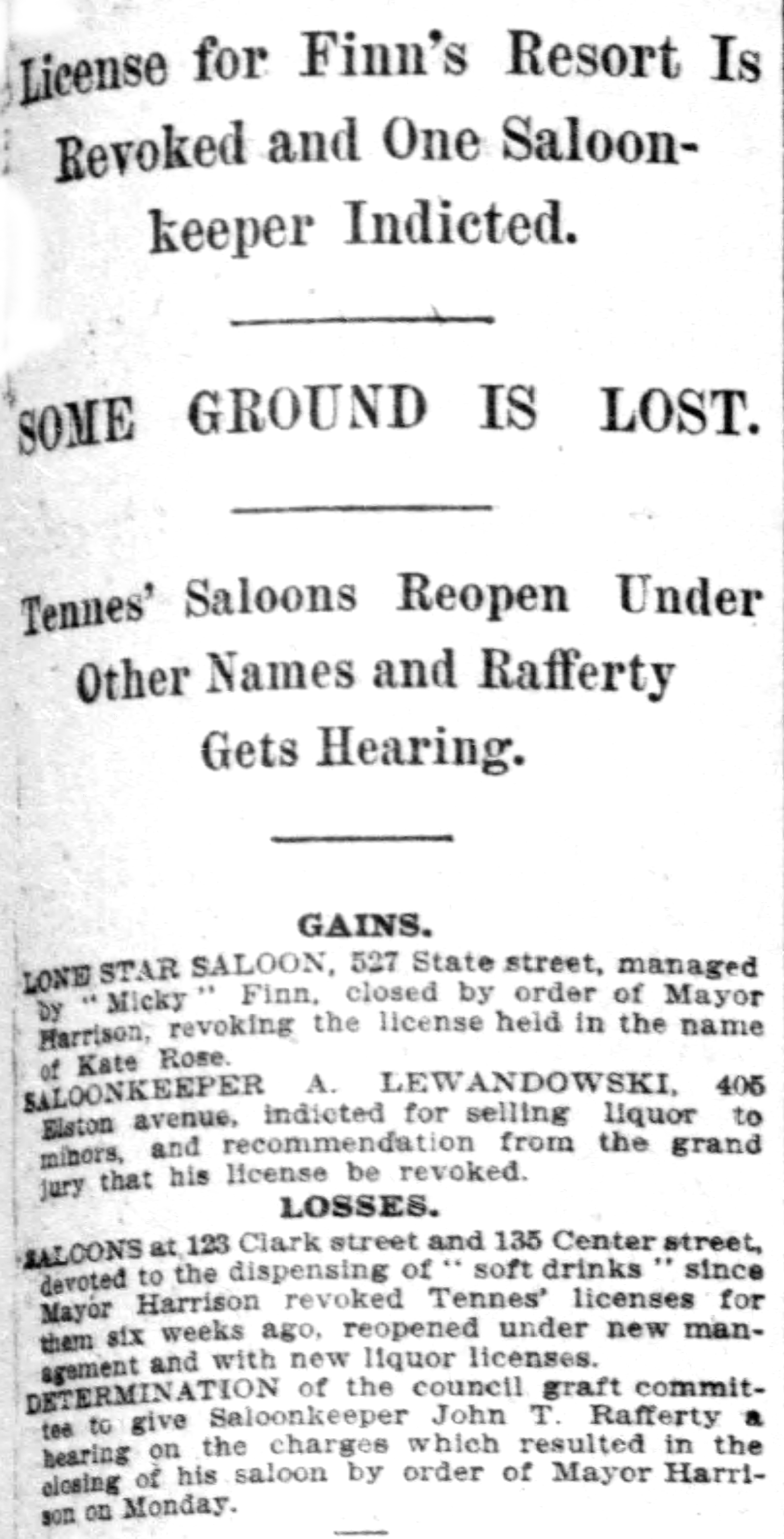 When the champions of the law and order in Chicago balanced their day’s account last evening they were in doubt as to which side was ahead. If the session of the graft committee today results in the restoration of the Rafferty House they will have no trouble in deciding at a glance the day was not profitable. In the event the revocation order is sustained. It is believed that the result is a gain, because the closing of the Finn saloon one of the worst dens in the south side levee was eradicated.

The terrible story of drugs and robbery told to the council committee last Tuesday by (Gold Tooth) Mary Thornton and Isabel Ffyffe yesterday was supplemented by a report to Chief O’Neill from Inspector Lavin. It was the recommendation of the chief, based on this report, that precipitated the revocation order last night. Here is the inspector’s account of the class of crimes which frequently were witnessed in Finn’s place:

At 3 a.m. Dec. 6, T. J. Keehan was robbed of $120 in Finn’s saloon, A raid on the place resulted in the arrest of G. A. Steffen, Thomas Kennedy, James Barthe, and Mabel Hughs. Barthe testified that Keehan was intoxicated, and that Steffen, after throttling him, took the money. A crowd of habitues witnessed the crime, for which all of the prisoners have been held to the grand jury.

Finn Says He Was “Jobbed.”
Before the saloon was closed yesterday Finn charged the Thornton woman with “jobbing” him. He tried at first to pass the matter off as a joke. He declared:

I’d lose money in feeding “dope” along with the big “tubs” and the clams I dish up to the “guys” that blow in here. I wouldn’t get enough money out of their clothes in a year to pay for the “dope.” Gee, but, “Gold Tooth Mary’ got busy with that graft committee. I heard that it last evening, and so I staid in the saloon all night for fear I wouldn’t know the place this morning. I had dreams all night of small guys with big rolls blowing in here inhaled “knockout drops.” It was hard lines ??? enough, to wake up this morning and see the same old bums, paying their nickels for big glasses of beer and making a “roar” because they don’t get more clams.

At this juncture the grimy bartender handed an extra clam to a customer, and Finn turped with a yell of remonstrance.

Now, what do you think of that? Even my own barkeep is trying to do me.

Finn had talked himself into such a gloomy mood that when the patrolman arrived with the order to close he accept it in silence as another evidence that “Gold Tooth Mary” had “made good.”

Fails to Prove Assault.
Earlier in the day Mary Thornton had carried her fight on Finn into the Harrison street police court, but there she failed to “make good.” She charged Agnes Thornton and Mabel Hughes, other habitues of the place, with assaulting her when she demanded of Finn money which was due her on commission for drinks sold. The defendants had been arrested in a raid on the place the previous day. The complainant had only her own statement to offer against the joint details of the defendants, and so the case was continued.

New Licenses for Tennes’ Saloons.
Tennes’ licenses on the Clark street and Center street saloons were revoked on the grounds that the proprietor “who is reputed to be fighting the so-called “gambling trust,” has been conducting handbooks. Since then the places have been open, but no liquor was sold. Yesterday a brewing company secured licenses for two new managers.

“I guess the brewing company couldn’t stand to see two good places selling no beer, and so got ‘busy,’ was the explanation of the reopening made last evening by Charles Tennes.

Small Boys Are Witnesses.
Lewandowski’s indictment was brought about through evidence secured by the Citizens’ League. Several small boys testified that they found no trouble in purchasing liquor in the place and further evidence showed that it was uncommon to find young boys intoxicated in the place.

“We will attend to this end of the case,” was the order issued by the jury to Secretary A. W. Gilbert of the league. “Take this evidence before Mayor Harrison, and demand the revocation of this man’s license.”

Further evidence of the character of ” Micky ” Finn’s saloon at State street and Harmon court, which was closed on Wednesday by order of the mayor, was heard in Justice Caverly’s court during the morning. Gustav Steffan told how T. J. McKegan had been inveigled into the saloon and robbed by himself, James Barthe, and two other men. Steftan and Barthe were held to the grand jury.

The neighborhood of the Lone Star Saloon,
State Street, near Harrison Street
1898

Mickey Finn was arrested last night and lodged in the South Chicago police station. Mickey, also known as Mike, runs a hut at One Hundred and Fifteenth street and the Calumet river. He and his housekeeper, Millie Schober, and twenty customers were swooped down on by the police and all taken to the station. A wagonload of booze and beer was confiscated. Mickey and the woman were charged with running a disorderly house and selling liquor without formal authorization by those duly elected, appointed or otherwise chosen to say who may or mayn’t. Tho others were charged with being inmates, etc., etc. 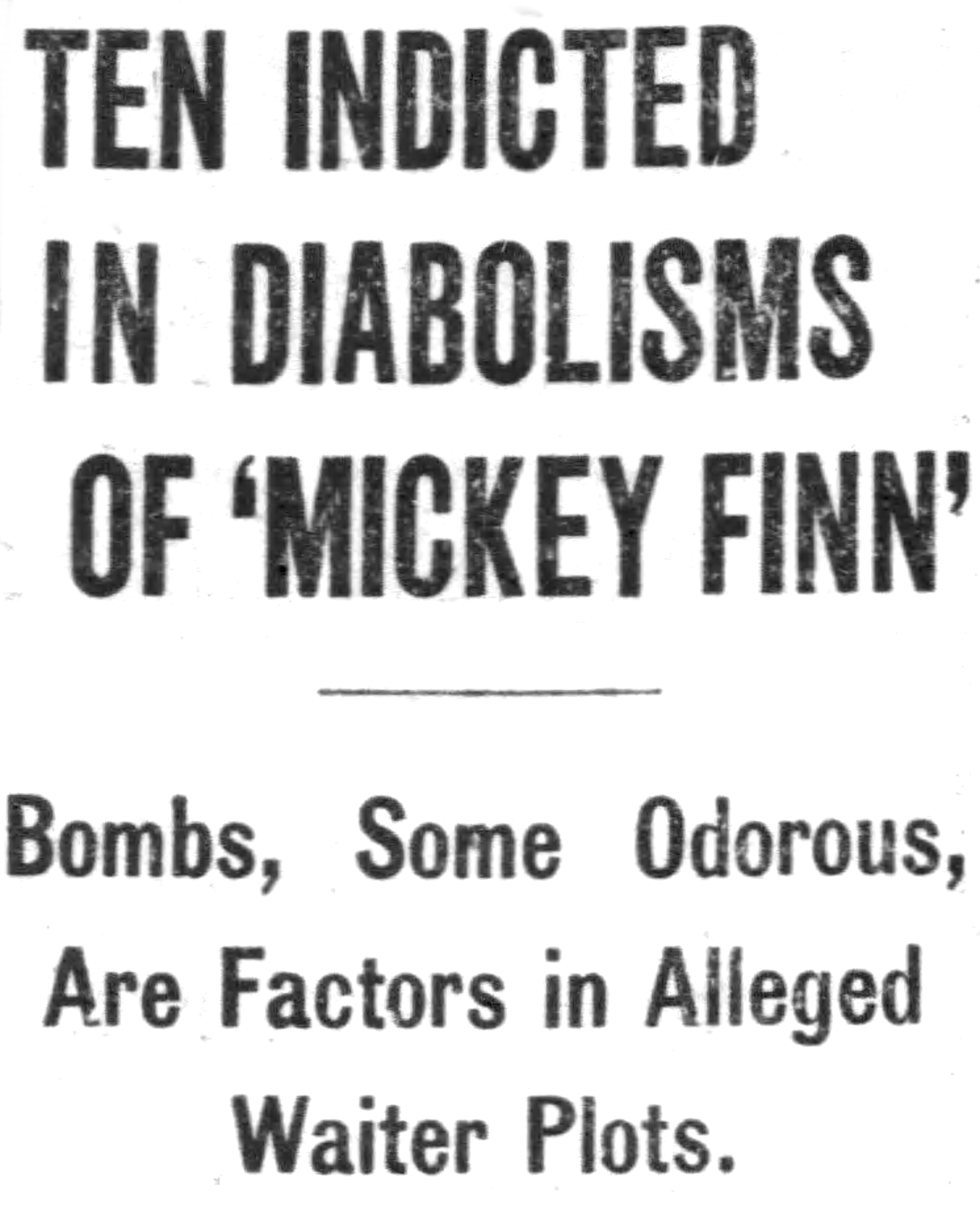 Ten persons were indicted by the grand Jury yesterday in connection with the drugging of patrons of hotels and restaurants by waiters through the use of “Mickey Finn” powders. Forty-nine witnesses appeared, among whom were eight men and five women victims of the drug. The indictments will be returned before Judge Kersten in the Criminal court tomorrow morning.

Among those reported to be indicted on charges of conspiracy are:
W. Stuart Wood, 333 East Fifty-fifth street, manufacturer and dispenser of the drug.
Lincoln Powers and John Millnan, bartenders at the waiters’ union headquarters, where the drug was sold to waiters.
George McLain, who told the police when arrested he is a business agent of a bartenders’ union.
Benjamin Parker, president of the waiters’ union.
Herbert Gould, business agent of the union.

Wide Range of Testimony.
These men were arrested on June 22, when detectives from the state’s attorney’s office raided the union headquarters and took into custody 150.

Testimony before the grand jury covered both the use of “Mickey Finn” powders by waiters to pay personal grudges against patrons who had incurred their displeasure, and the use of the powders and other means by waiters at the orders of the union officials to force the owners of hotels and restaurants to unionize their places of business.

Much testimony was given regarding the use of odor bombs by waiters to force the business men to come to the union’s terms and the indictments will contain a count of conspiracy to injure business. Two cases of dynamiting were testified to. In three cases the waiters who served meals to persons who became ill from “Mickey Finn” powders were identified by the victims.

Bought in St. Louis.
The evidence as presented by Assistant State’s Attorney Nicholas Michels showed Wood purchased the powder from the Meyer Drug and Chemical company of St. Louis under the name of the Crown Chemical and the Chief Chemical companies. These he put up in packages of twelve ten grains and sold them at 20 cents a package to the union. These were kept behind the bar at the union’s headquarters and were sold to the waiters at 25 cents a package and to outsiders at 35 cents a package.

Michels declared he has evidence in his possession to show that dynamite as used in two instances because of a refusal to unionize, and that he has evidence of seven instances of stench bombs. Among them was the Lord Northeliffe banquet last year at the Hotel La Salle.

“Stenchbombs were used at other banquets when the managers refused to unionize,” said Michels. ” In one instance notice was served on the man agement to unionize or something would happen. The next night a stenchbomb was placed in this loop restaurant. At another banquet the odor became so strong from the bomb that women fainted.”

Women Victims of Drug.
The women victims of the drug, it was learned, were Miss Mary Chadwick, Miss Ellen Dobson, Miss Olive Amendt, Mrs. Ellen Phee, and her niece. Marie Phee. They testified they received the drug in coffee. Miss Dobson was given the drug at the Jackson Park tavern and Mrs. Phee and her niece were given it at the Kenwood hotel.

Among the loop restaurants where the drug was said by witnesses to have been used are the Edelweiss and the Terrace Garden. It was also said to have been used at the La Salle, the Morrison, and the Sherman hotels, and at the Union League and the University clubs.

Where Odor Bombs Were Used.
Odor bombs were said to have been used by the union at the Hotel Randolph. the La Salle, Brevport, Sherman, and Morrison hotels, and the Bismark Garden, the Green Mill, and the Lambs Café. At the Morrison, according to the testimony. the bombs were used on three different occasions.