A seemingly innocent furniture handling company, the S.M.C. Cartage Company actually was a prohibition-era booze warehouse on 2122 N Clark street. On the frigid morning of 14 February 1929, in this unheated brick garage, seven men were lined up against a whitewashed wall and pumped with 90 bullets from submachine guns, shotguns and a revolver. It was the most infamous of all gangland slayings in America, and it savagely achieved its purpose–the elimination of the last challenge to Al Capone for the mantle of crime boss in Chicago. By 1929, Capone’s only real threat was George “Bugs” Moran, who headed his own gang and what was left of Dion O’Banion’s band of bootleggers. Moran had long despised Capone, mockingly referring to him as “The Beast.” 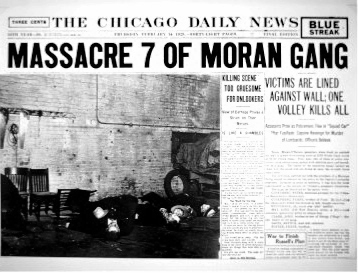 Irish immigrant, Michael McDonald (1839-1907) ran a 4-story casino palace in the heart of the city known simply as “The Store”. When an employee asked McDonald how they would ever keep The Store filled to turn a profit, McDonald allegedly responded “Don’t worry about that. There’s a sucker born every minute”. McDonald obtained the cooperation of the police force, politicians, and an army of skilled confidence men to run his rigged games. He is often credited for W. C. Field’s his favorite line, “Never give a sucker an even break.”
McDonald’s criminal activities prefigured those of Al Capone and other Chicago gangsters.

Roger Plant’s resort at the northeast corner of Wells and Monroe was one of the wickedest vice resorts in the country in the 1860s. The police called it the “Barracks” but Roger called it “Under the Willow” because of a lone willow tree on the corner. There were about 60 rooms in the shacks that made up Roger’s resort, and in them was practiced virtually every sort of vice and criminality known to man. There was a saloon, three brothels, and dens where young girls were broken in by a dozen men and then sold to bordello’s. It was believed that a tunnel ran from the brothel under Wells Street to the vice dens by the Chicago River. This tunnel, which would have been the result of several subterranean rooms that were built when the city raised its level by 14 feet and the term “underground” became coined as organized crime activity. One of the tenants here was Sammy Caldwell, a burglar who was said to have been the first to gag and bind his victims with plaster and tape. John Herbert Dillinger (June 22, 1903 – July 22, 1934) was an American bank robber in the Depression-era United States. His gang robbed two dozen banks and four police stations. Dillinger escaped from jail twice; he was also charged with, but never convicted of, the murder of an East Chicago, Indiana police officer who shot Dillinger in his bullet-proof vest during a shootout, prompting him to return fire. It was Dillinger’s only homicide charge.

Ana Cumpanas, also known as Anna Sage told police that Dillinger was spending his time with another prostitute, Polly Hamilton, and that she and the couple would be going to see a movie together on the following day. She agreed to wear an orange dress, which is believed to have appeared red in the artificial lights of the theater, so that police could easily identify her. She was unsure which of two theaters they would be attending but told the agency their names: the Biograph and the Marbro.

A team of federal agents and officers from police forces outside Chicago was formed, along with a very few Chicago police officers. Among them was Sergeant Martin Zarkovich, to whom Sage had informed on Dillinger. Federal officials felt that the Chicago police had been compromised and could not be trusted, and Hoover and Purvis also wanted a Federal coup for their own reasons. Not chancing another embarrassing escape, the police were split into two teams. On July 22, one team was sent to the Marbro Theater on the city’s west side, while another team surrounded the Biograph Theater at 2433 N. Lincoln Avenue on the north side. During the stakeout, the Biograph’s manager thought the agents were criminals setting up a robbery. He called the Chicago police who dutifully responded and had to be waved off by the federal agents, who told them that they were on a stakeout for an important target. 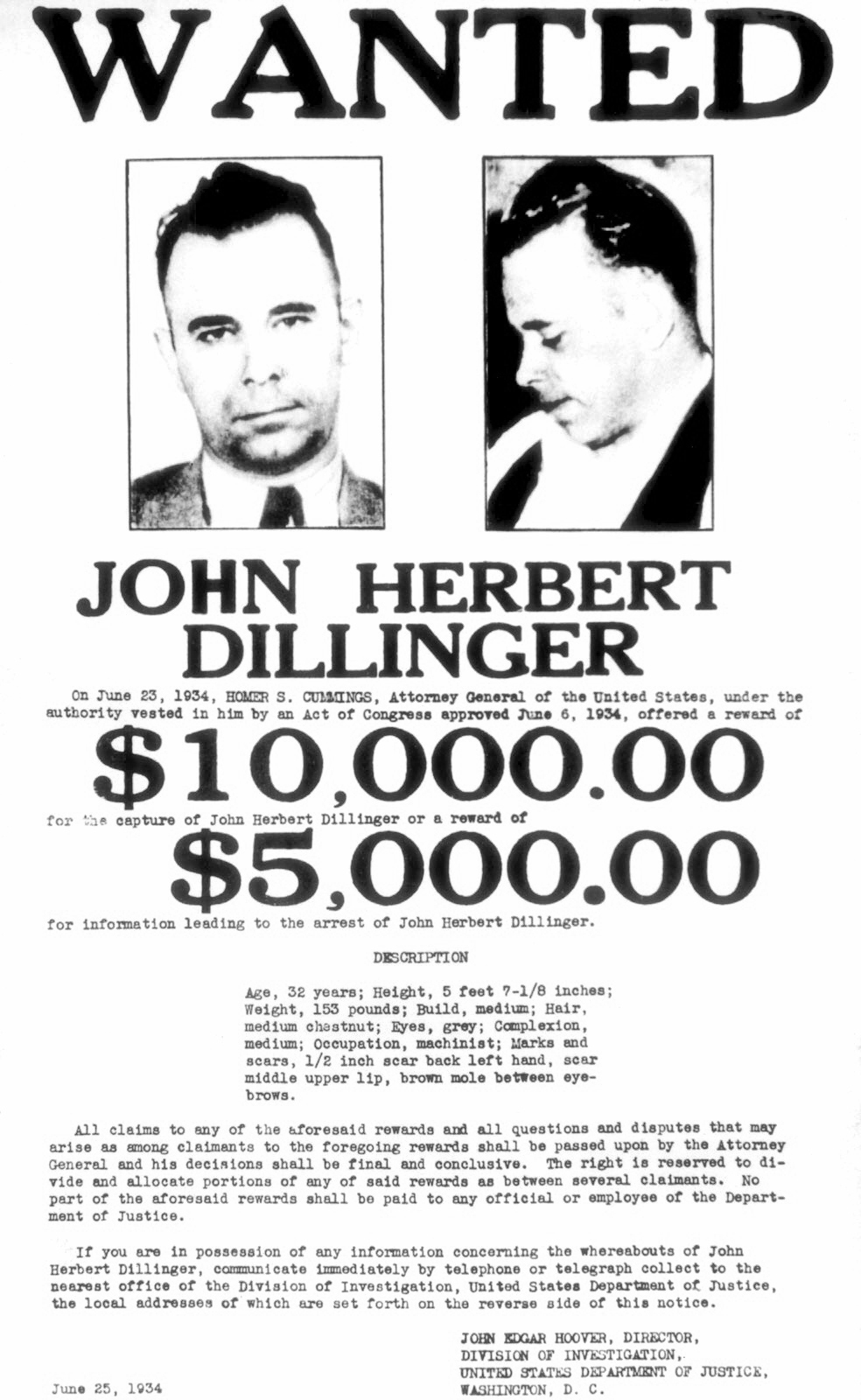 Dillinger attended the film Manhattan Melodrama at the Biograph Theater, in Chicago’s Lincoln Park neighborhood. Dillinger was with Polly Hamilton and Ana Cump?nas. Once they determined that Dillinger was in the theater, the lead agent, Samuel P. Cowley, contacted J. Edgar Hoover for instructions, who recommended that they wait outside rather than risk a gun battle in a crowded theater. He also told the agents not to put themselves in harm’s way and that any man could open fire on Dillinger at the first sign of resistance. When the film let out, Melvin Purvis stood by the front door and signaled Dillinger’s exit by lighting a cigar. Both he and the other agents reported that Dillinger turned his head and looked directly at the agent as he walked by, glanced across the street, then moved ahead of his female companions, reached into his pocket but failed to extract his gun,:353 and ran into a nearby alley. Other accounts state Dillinger ignored a command to surrender, whipped out his gun, then headed for the alley. Agents already had the alley closed off, but Dillinger was determined to shoot it out.

Three men fired the fatal shots: Clarence Hurt fired twice, Charles Winstead fired three times, and Herman Hollis fired once. Dillinger was hit from behind and he fell face first to the ground. Two female bystanders took slight flesh wounds in the legs and buttocks from flying bullet and brick fragments. Dillinger was struck three (or four, according to some historians) times, with two bullets entering the chest; one of them nicked his heart, and the fatal shot – which entered Dillinger through the back of his neck, severed his spinal cord and tore through his brain before exiting out the front of his head just under his right eye. Although three agents shot Dillinger, Winstead was believed to have fired the fatal shot, and he received a personal letter of commendation from Director Hoover. An ambulance was summoned, though it was clear Dillinger had quickly died from his gunshot wounds. At 10:50 p.m. on July 22, 1934, Dillinger was pronounced dead at Alexian Brothers Hospital. According to the investigators, Dillinger died without saying a word. There were also reports of people dipping their handkerchiefs and skirts into the blood pool that had formed as Dillinger lay in the alley in order to secure keepsakes of the entire affair. Dillinger’s body was displayed to the public at the Cook County morgue after his death.

Dillinger was buried at Crown Hill Cemetery (Section: 44, Lot: 94) in Indianapolis. His gravestone has had to be replaced several times because of vandalism by people chipping off pieces as souvenirs.

In every urban area that had rowhouses, it was required by law to provide access to the front and rear sides of the building for tenants. These were called “passageways” or “breezeways”, but in Chicago they were “gangways”. During the Capone era, these dark and narrow areas became escape routes for those evading the law or other gang members. Even the police were afraid to enter gangways alone. 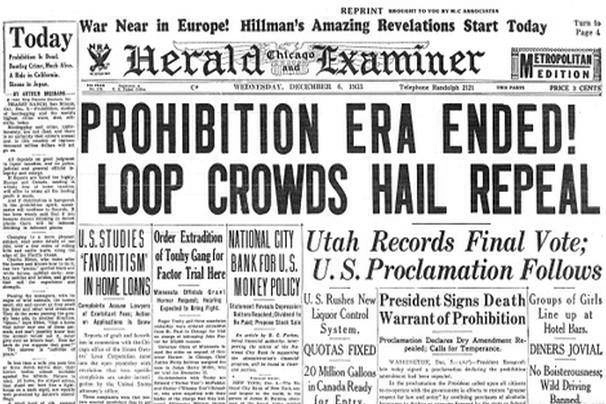 On December 5, 1933, the ending of Prohibition meant the end of the gangland wars.