The Skandinaven was published from June I, 1866 till 0ctober 30, 1941. Published as Skandinaven og Amerika, January 3-December 30, 1873. In January 1874 a semi-monthly European edition of Skandinaven was begun, intended mainly for subscribers in Norway and Denmark. It continued publication until September 1893. 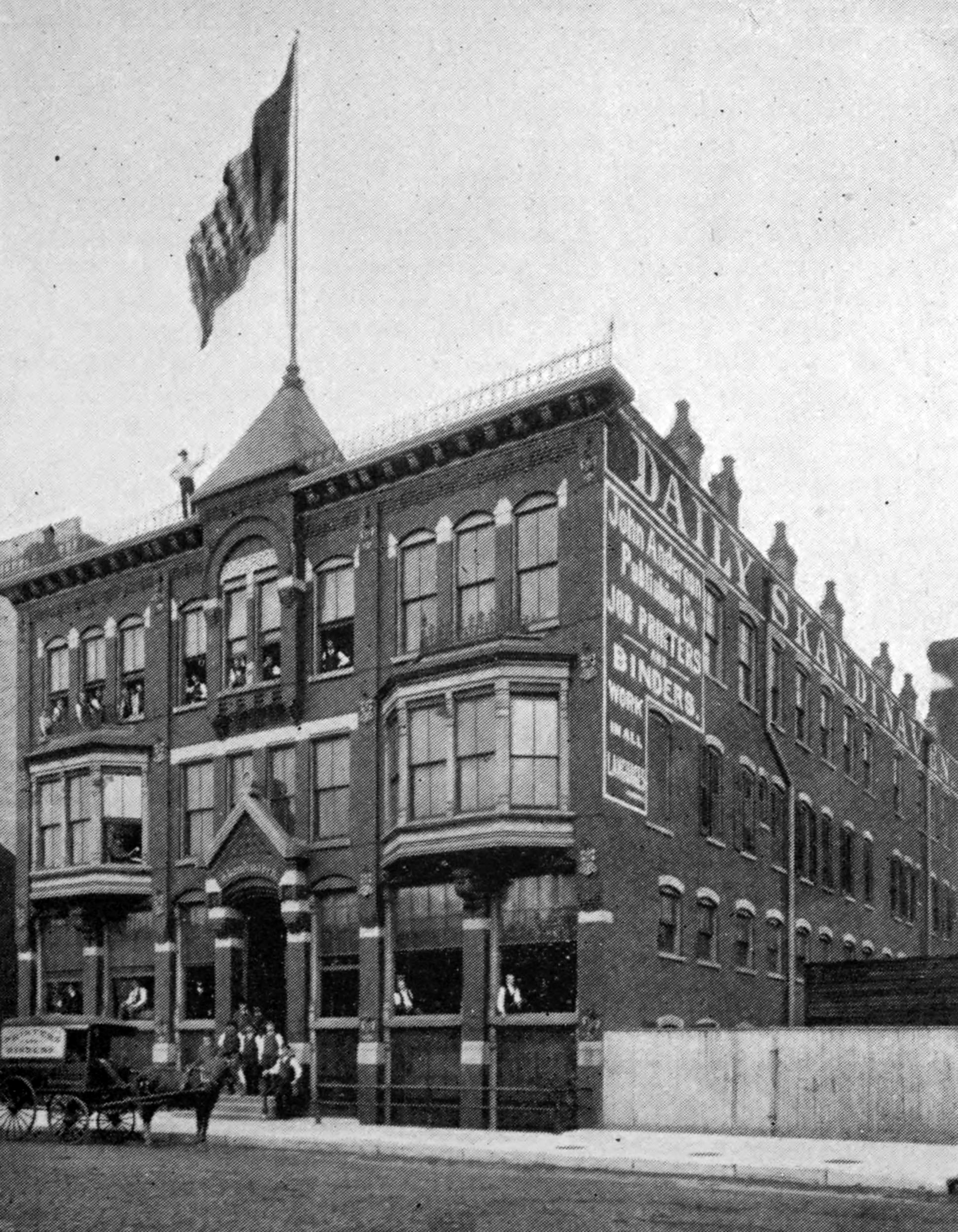 From The Standard Guide to Chicago in 1893:

Founded in 1866 by John Anderson and Knud Langland. The Skandinaven was, at its birth, a four page weekly paper. It remained a weekly until the week of the Great Fire of 1871, and a daily issue was commenced which has been continued without interruption to the present time (1893).

Its earliest editor, Mr. Knud Langland (now deceased), was one of the ablest Scandinavian journalists of his times and did much toward popularizing the paper and extending its influence and usefulness. He, however, remained a partner of Mr. Anderson but a short time, and the work of building up the property and placing it upon the solid basis which it occupies to-day devolved entirely upou the latter. The Skandinaven passed through all the trials and troubles incident to the establishment of a newspaper, but, though in a small way at the beginning, made steady gains, and early in the seventies began to command credit, respect and circulation. To-day it has a larger circulation than any other paper printed in the Scandinavian language in this country. Mr. Anderson, the head of the establishment, was brought to Chicago by his parents in 1845. Learning the printing business, he became connected with the Chicago Tribune and set type for that paper when it was a very small and humble sheet. He is, therefore, a practical newspaper man, and his knowledge of the art of printing extended at an early age beyond the newspaper composing room. The result of this has been the building up of a job printing establishment in connection with the Skandinaven which in many ways ranks above some of the most pretentious in the country.

The Skandinaven job department, for instance, will accept English copy, and turn it out in Scandinavian (which means Norwegian, Danish or Swedish), German, French, Spanish, Italian, Bohemian or Polish type.

The Skandinaven Building is a structure 60×118, three stories and basement, of modern design and substantial construction.It was located at 183, 185 and 187 N. Peoria st. The house is the largest importer of Scandinavian books in the United States. The bindery is in itself one of the most important departments, and very handsome editions are produced in paper, cloth and more expensive covers. The practical knowledge of Mr. Anderson has been felt in the press room as well. The entire basement of the building (with the exception of a portion given over to the storage of paper, which the firm purchases in large quantities, being one of the heaviest consumers in the city) is occupied with machinery of the latest pattern and most moderif devices. The facilities of the concern for turning out large jobs are not inferior to any in the city.

Mr. Anderson’s ideas have naturally made themselves felt upon the editorial course of the Skandinaven and its allied publications. He was an abolitionist and free soiler in his young manhood, and when it was a crime to oppose the slave element. He has always been a stanch republican. He believes in clean journalism and clean politics,and the moral tone of The Skandinaven has always been maintained at the highest. There are in the northwest to-day fully 4,250,000 Scandinavians. As a rule they are educated, thrifty, economical and progressive people. While many cling to the cities, and occupy positions of honor among the commercial classes of Chicago, St. Paul, Minneapolis, Milwaukee, Madison, Eau Claire, Omaha, Fargo and other cities in the West, the great majority have agrictiltural tastes, and some of the finest farms in the Northwest are owned and operated by them. To these people the daily or weekly editions of The Skandinaven bring the news. From The Skandinaven they obtain the drift of current opinion, while it keeps them acquainted with the world’s doings in every department of human activity. The Husbibliothek monthly brings them literary contributions, and discusses matters of interest to the householder, the farmer, the housewife and the young people.

From 1892 to 1911, Nicolai A. Grevstad was editor of The Skandinaven. After 1900, the company began to suffer attrition. The gradual assimilation of Norwegian immigrants into the American population resulted in a dwindling reader base. Anundsen Publishing Company of Decorah, Iowa bought The Skandinaven‘s subscriptions, with the intent of merging the subscription base with that of its own Norwegian language newspaper, the Decorah Posten. The last issue of Skandinaven was published on October 31, 1941.

When The Skandinaven suspended publication, Reidar Rye Haugan established the Chicago based, Norwegian language newspaper Viking on which he served as both editor and publisher. In 1958, Chicago journalist Bertram Jensenius took over Viking, renamed it Vinland and published it until his death in 1976.