The rivalry with the Tribune became increasingly unsuccessful in the 1930s. After additional mergers, the paper was sold to the Tribune in 1956. 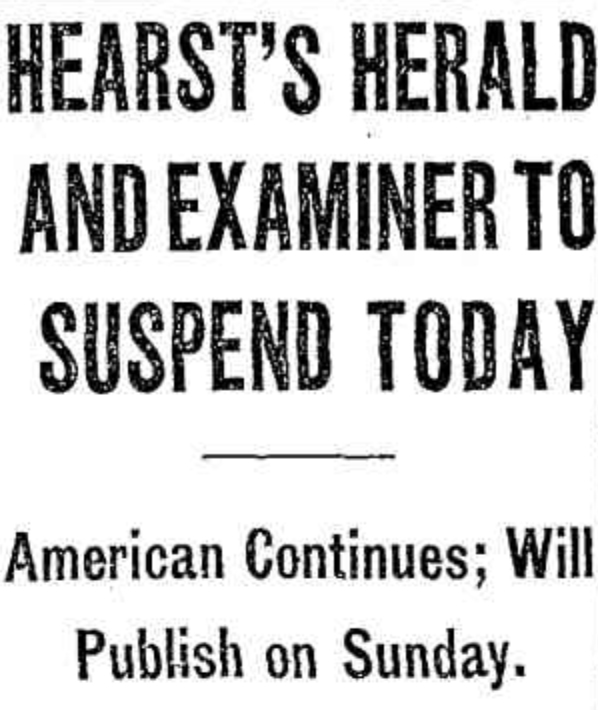 The Chicago Herald and Examiner, which has been published as a morning newspaper for more than twenty years, will suspend publication with today’s issue, An announcement to this effect was made by the management last evening.

The Chicago Evening American, one of the William R. Hearst chain of newspapers, as was the Herald and Examiner , will take the name Chicago Herald-American. It will continue to publish an afternoon newspaper and will also have a Sunday edition. The change will become effective tomorrow.

About 700 are affected by the closing down of the Herald and Examiner. Some of them, it was said, will be retained on the staff of the Chicago Herald-American. Others will draw severance pay.

Contained Remnants of 17 Papers.
The Herald and Examiner contained within itself all that remained of seventeen former Chicago newspapers. It had existed under that name since May 2, 1918, when Hearst bought the Chicago Herald and merged it with his Chicago Examiner, founded in 1902.

History of Predecessors.
Oldest of these newspapers was the Courant, founded in 1853 and changed to Young America the next year. Soon afterward it became the Chicago Times, which was merged in 1860 with the youthful Chicago Herald under the title Herald and Times. In 1861 the name was changed to Chicago Times.

The Chicago Record was first published in 1893. Its ancestor was the Morning News, first issued in 1881 as a morning edition of the Chicago Daily News, and changed in 1892 to the Chicago News Record-a year be. fore it became the Record. The merged Record and Times-Herald in 1901 became the Record-Herald.

Since civil war days there have been many failures of newspapers in Chicago. THE TRIBUNE, meanwhile, has grown without absorbing any rival publications. Its last merger was with the Chicago Democrat, purchased in 1861 from Long John Wentworth, who formerly was mayor of Chicago.

Present high costs of publishing have been blamed in the last two years for the suspension of daily papers all over the United States. A compilation shows that between June, 1937, and Aug. 1, 1939, a total of seventy-six ceased to publish, thirty-five of them since last Jan. 1.

Higher Taxes a Factor.
Competition from the radio and the neon sign, which gave outdoor advertising a new lease on life some fifteen years ago, had their effect. In- creasing taxes and higher costs, which could not always be passed on to readers and advertisers, were factors just as important.

Newsprint paper prices rose 25 per cent between 1933 and 1938. Wage rates of Chicago unions increased, in the same period, from 8 to 33 per cent. At the same time the Chicago newspapers were asked to employ more help. The number of tradesmen employed on the Chicago papers was 14 per cent greater in 1938 than in 1936.