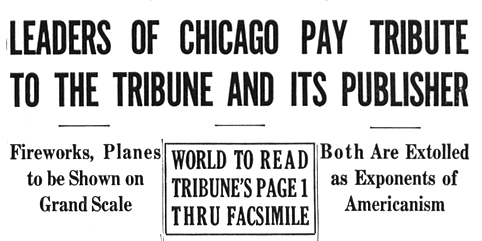 A mlle·long stretch ot the lake between Roosevelt and Cermak rds.will be a battlefront tonight.

As a crashing climax to ceremonies in observance ot its 100th birthday, THE CHICAGO TRIBUNE will present a spectacle surpassing in sound, color, and feats ot aviation skill anything seen or heard by man since the guns were silenced on VJ day. 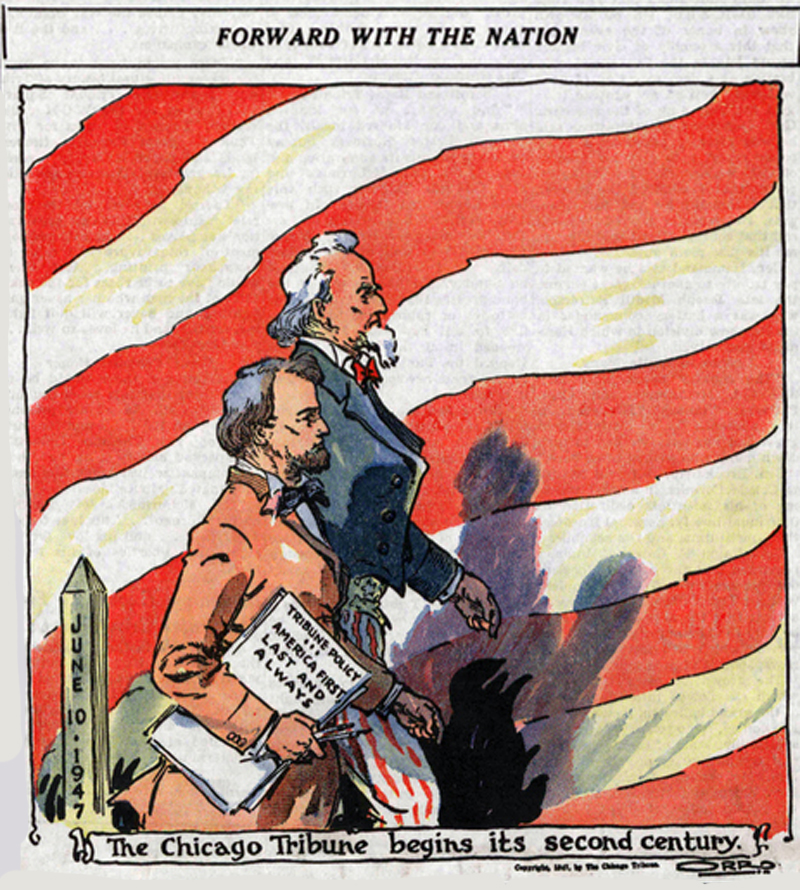 Seated In comfort and safety on the broad and grassy expanses of Burnham park, trontlng the lagoon which separates the mainland from Northernly Island, a great crowd will witness a fireworks display on a scale never attempted before.

Will Show Wlnnlng ot War
The blaze of 50,000 pounds of fireworks explosives will be visible across the lake to the opposite shore. A demonstration of the atom bomb explosion at Hiroshima is merely one of a half hundred features.

Just before sunset, a fieet ot the world’s tastest planes, many of them jet. propelled, will dash in at low levels and perform a series of darIng maneuvers which will slmulate the striking tactics by which the war was won In the Pacific.

The United States army and navy with rivalry stimulated by this rare opportunity to compete with each other in the alr, have promised an unprecedented aerial show ealculated to cause heart palpitations.

Show Visible to All
The fireworks and aviation exhibitions are only two featurea of a free spectacle which is expected to draw one ot the largest crowds in Chicago’s history.

All that careful planning can accomplish has been prov e or the ease and convenience ot the spectators. There is plenty of room for half a million persons, if necessary. And the show has been so planned that every one will have an equal opportunity to see what goes on.

From 3 p.m. onward, with a brief rest interval between 4:45 p.m. and 6 p.m., there will be a continuing series of exciting events on land and water to hold the attention of the assembly.

Boat Races Start Show
Beginning with class A outboard motor boat races sanctioned by the American Power Boat association, which will whip the waters of the lagoon to foam during the afternoon, the tempo of the show will gradually be stepped up until at 7 p.m. the air spectacle starts with the roar from the north of 20 jet P-80 Lockheed Shooting Star planes flying at speeds above 500 miles an hour.

For thirty minutes thereafter, the sky will be filled with man-piloted meteors. The jet-propelled planes, some of which never have performed before a civilian audience before, will stage the most sensational formation maneuver that can be performed by fast military aircraft—the Lofberry circle, two in three miles in diameter and perhaps 5,000 feet high. There will be screaming dives and “passes” before the open-mouthed spectators. 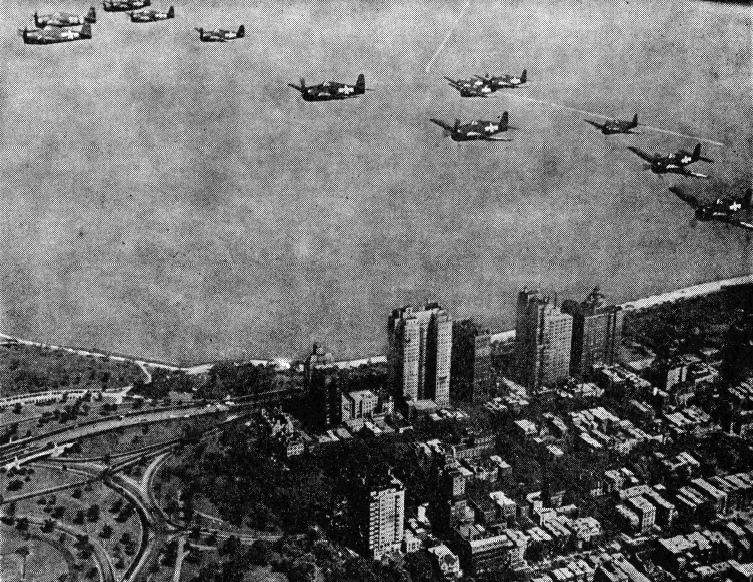 Flight of Navy Hellcat planes along the lake front yesterday in the vicinity of the Fullerton av. intersection with Lake Shore dr. Today the planes will join in aerial maneuvers for The Tribune’s centennial show.

War Maneuvers by Navy
The navy then takes over with a mass flight and demonstration of 47 plane carrier striking force, consisting of fighters, fighter bombers, and torpedo bombers and patrol planes. The crowd will witness exactly the same maneuvers which struck terror into the Japs over the Pacific. Famous war flyers, with scores of knocked down enemy planes to their credit, will be at the controls, eager to outdo the army in displays of daring.

From then on, until 10:36 p.m., when the grand finale of the fireworks display is completed, thrill will be piled upon thrill.

The first 100 bombs, to be fired at half-second intervals, will be touched off at 7:30 p.m., symbolizing the century which began for THE TRIBUNE on June 10, 1847, when 400 crudely printed copies were run off a hand press at Lake and LaSalle streets.

Singing by Audience
To the accompaniment of Armin Hand’s American Legion band, the vast audience will then sing the national anthem. Huge loudspeakers have been set up along the 1¼ mile length of Northerly Island which will carry the music and announcements of events clearly to the assembled thousands. They will hear THE CHICAGO TRIBUNE March, especially composed for the occasion.

More motor boat races at 8 p.m. will be staged and then in rapid succession will be presented water skiers on surf boards behind roaring launches; a helicopter demonstration over water; a fire boat display, a spectacular “Venetian parade,” in which 80 yachts will join, and a series of aerial acrobats on high wires described as eight shows rolled into one.

125 Foot Long Stage
Northerly Island will be lit by thousands of lanterns. In the center, facing the crowds, across the lagoon, a great stage, 125 feet long, has been constructed. The gigantic backdrop is a reproduction of a three-tiered birthday cake surmounted by the Tribune Tower, all illuminated by vari-colored lights. This construction piece of solid steel and canvas is the tallest outdoor display ever built.

Thruout the island’s expanse yesterday, scores of workmen were busy erecting the elaborate apparatus which will form the basic structure for the fireworks exhibition.

One hundred thousand square feet of pictorial displays will light the eastern sky. They will illustrate great historical moments in THE TRIBUNE’s 100 year history, from the Civil War to the second World war.

Portrait of Lincoln
There will be a portrait of Abraham Lincoln at his nomination as President, an event for which THE TRIBUNE was largely responsible. Also to be shown are Civil war scenes, a representation of the great Chicago fire of 1871, a scene typifying the World’s fair of 1893, which THE TRIBUNE helped to bring to Chicago, battle scenes from the Spanish-American war, and many other historic pictures.

THE TRIBUNE’s first building at Lake and LaSalle streets and contrasting pictures of Chicago’s skyline today will be shown. Interspersed with all of these, stretching the full mile length of the lagoon, will be a mechanical fireworks design of fountains and pinwheels. Rockets and air shells will continually be bursting in a brilliant sky display. 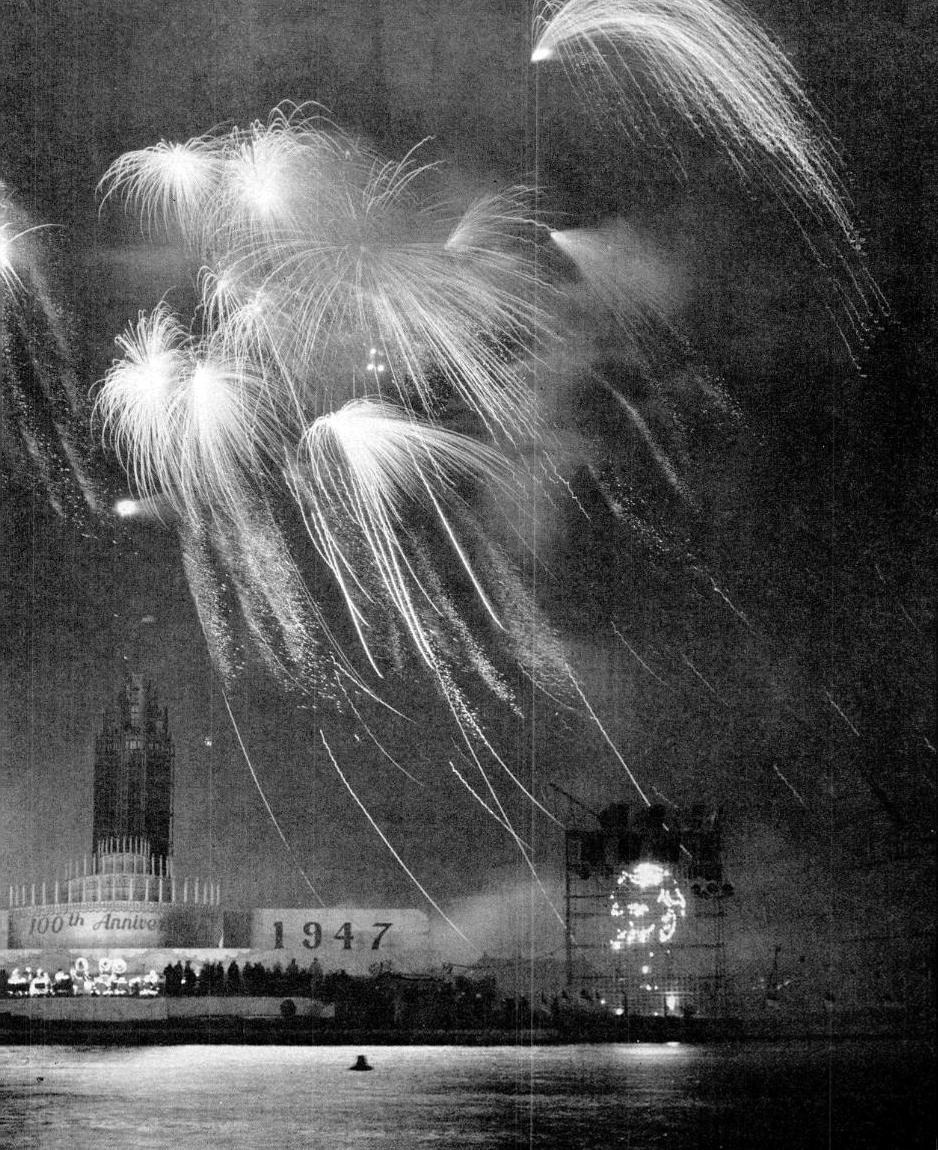 In a burst of fireworks over Chicago’s lake front the Tribune winds up its birthday party. Against model of Tribune Tower in background, fireworks depicted the Chicago fire of 1871, Hiroshima bombing, Little Orphan Annie. This display, an extraordinary shower of sparks, sprays over a profile of Lincoln (right) also done in fireworks.

Tribune Comics in Outline
TRIBUNE comic characters, such as Dick Tracy, Orphan Annie, and Moon Mullins will be outlined in brilliant burning colors as the show progresses. There will be two Niagara Falls displays instead of the customary one.

The biggest fireworks displays in history up to today have been those presented at A Century of Progress exposition and the New York World’s fair. Frank P. Duffield, producer of The Tribune display, said tonight’s exhibition would be greater than both those record-breakers rolled into one.

The high aerial thrill show will be on an equally unprecedented scale. It will include 11 acts performed on poles, ramps, wires, and platforms ranging from 80 to 150 feet in the air. One man weaves and slips about on a limber pole, describing 30 foot arcs 148 feet above the earth. Another rides a bicycle off an 80 foot chute and dives into the lagoon.

Girls in Thrill Slides
While this is going on, two girls slide by their teeth down wires stretched 110 feet into the air and another man and girl ride bicycles and balance themselves with poles atop a machine which revolves and swoops at the peak of a 100 foot steel tower.

Great searchlights will be trained upon these acts, which will be performed simultaneously along the one mile stretch in clear view of the spectators.

One of the show’s quietly beautiful moments will come when the Venetian garden pageant, extending 3,000 feet, will be presented from 9:20 to 9:45 p.m. The Navy Glee club will sing during this period.

Great fans of light in a changing rainbow of colors will sweep the sky as the huge festoons of lighted lanterns on the island are turned on. 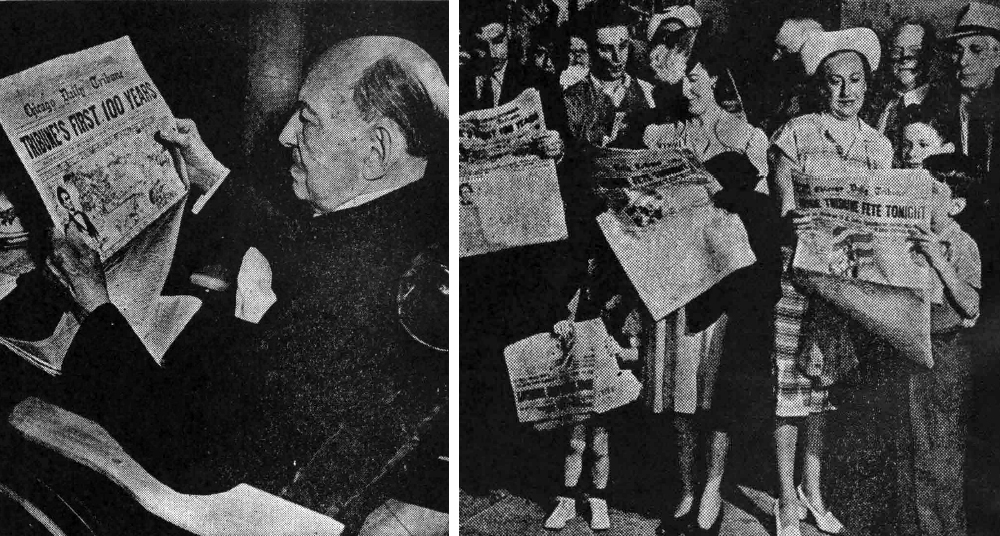 80 Yachts in Pageant
Some 80 private yachts which meanwhile have slipped into the lagoon under cover of darkness will suddenly be illuminated. Each ship will be decorated with strings of lights, flags, bunting, and searchlights. The skippers with the most tastefully decorated ships will receive rewards.

The public speaking portion of the affair has been made extremely brief. There will be short addresses by Mayor Kennelly, Gov. Green, and Col. Robert R. McCormick, editor and publisher of THE TRIBUNE.

Historical displays, commemorating THE TRIBUNE’s centennial, will be exhibited in the windows of several retail stores today. 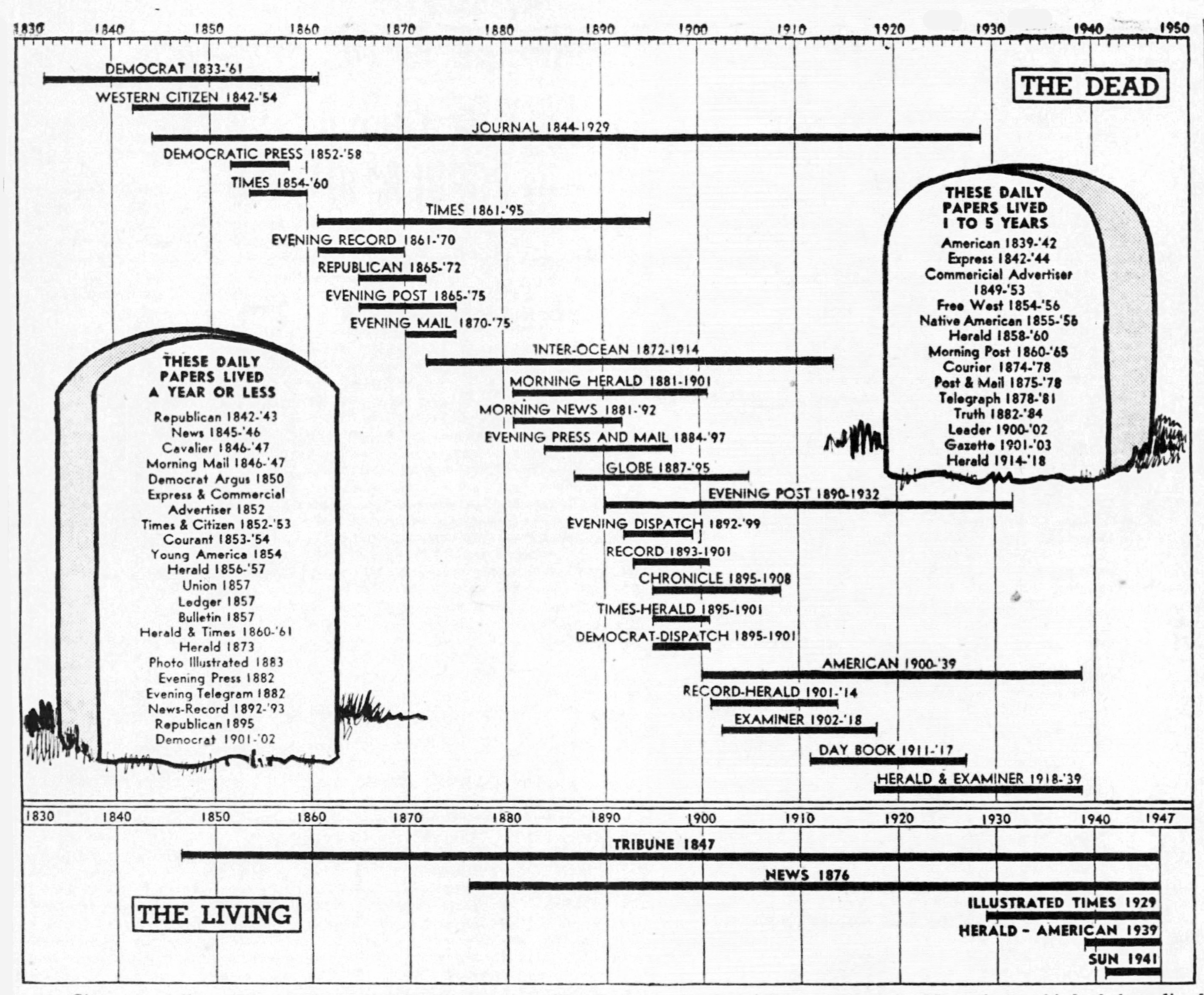 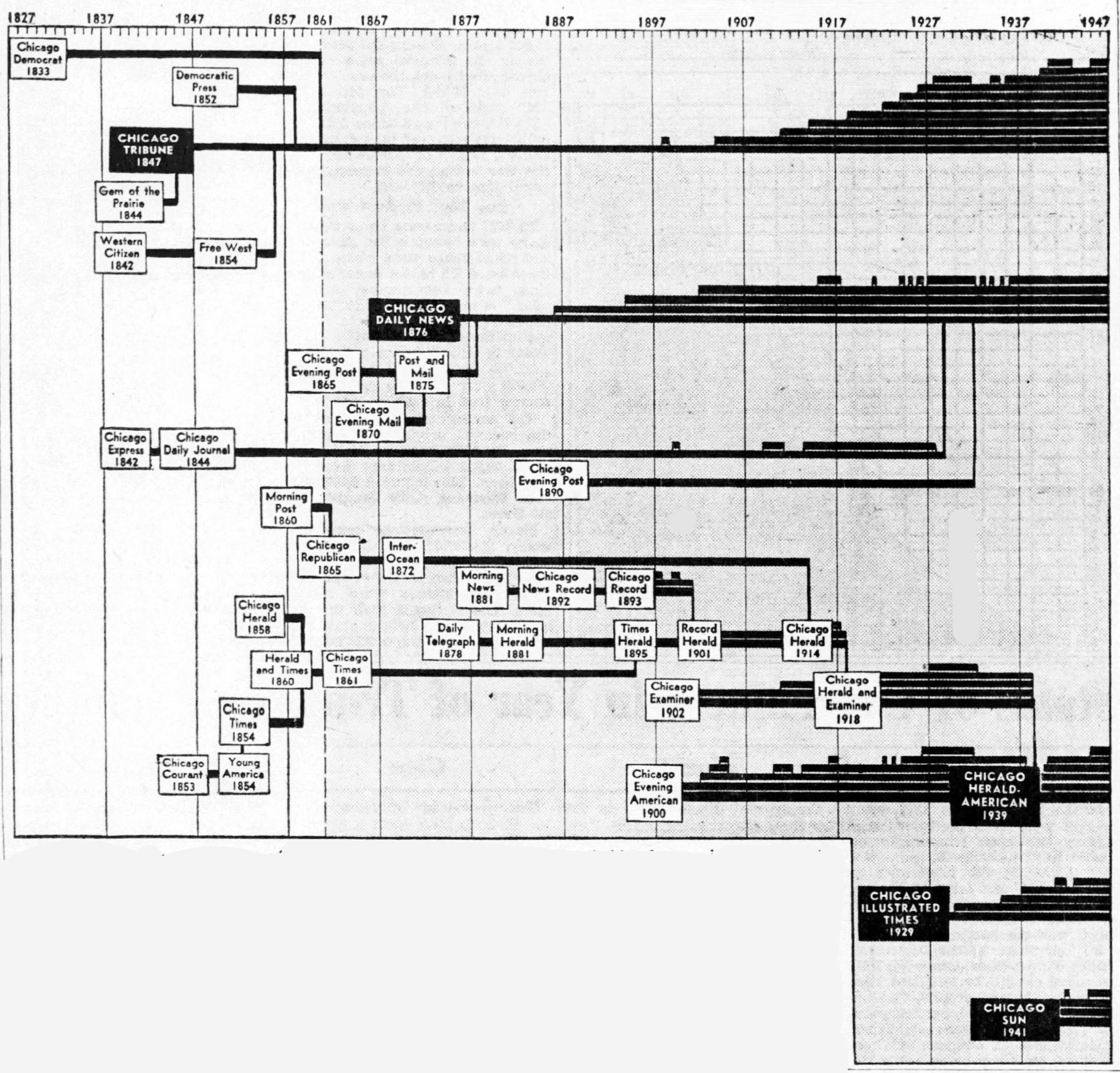 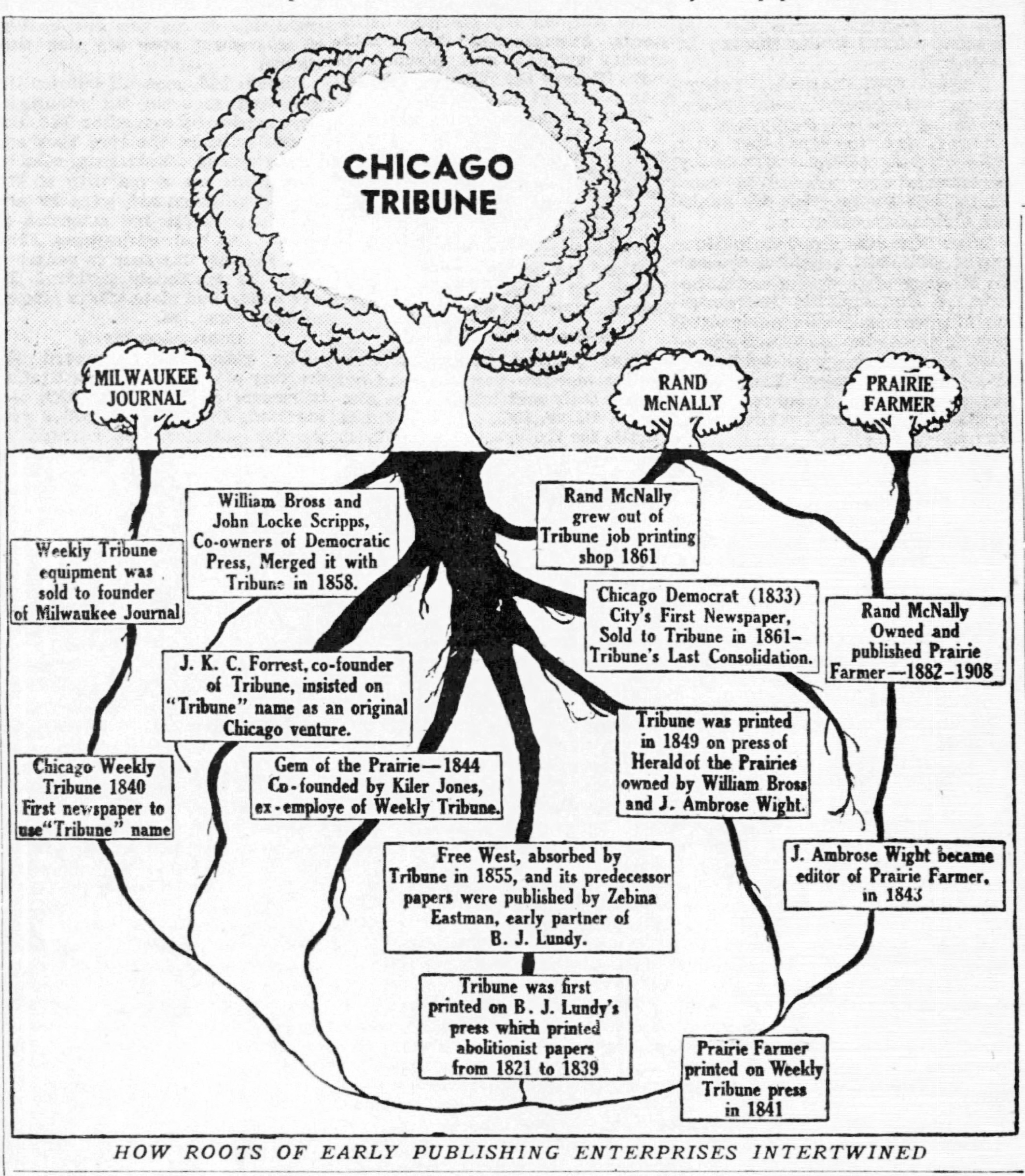 Routes by Which Facsimile of Tribune Centennial Edition is Being Sent to Appear in Newspapers All Over World. 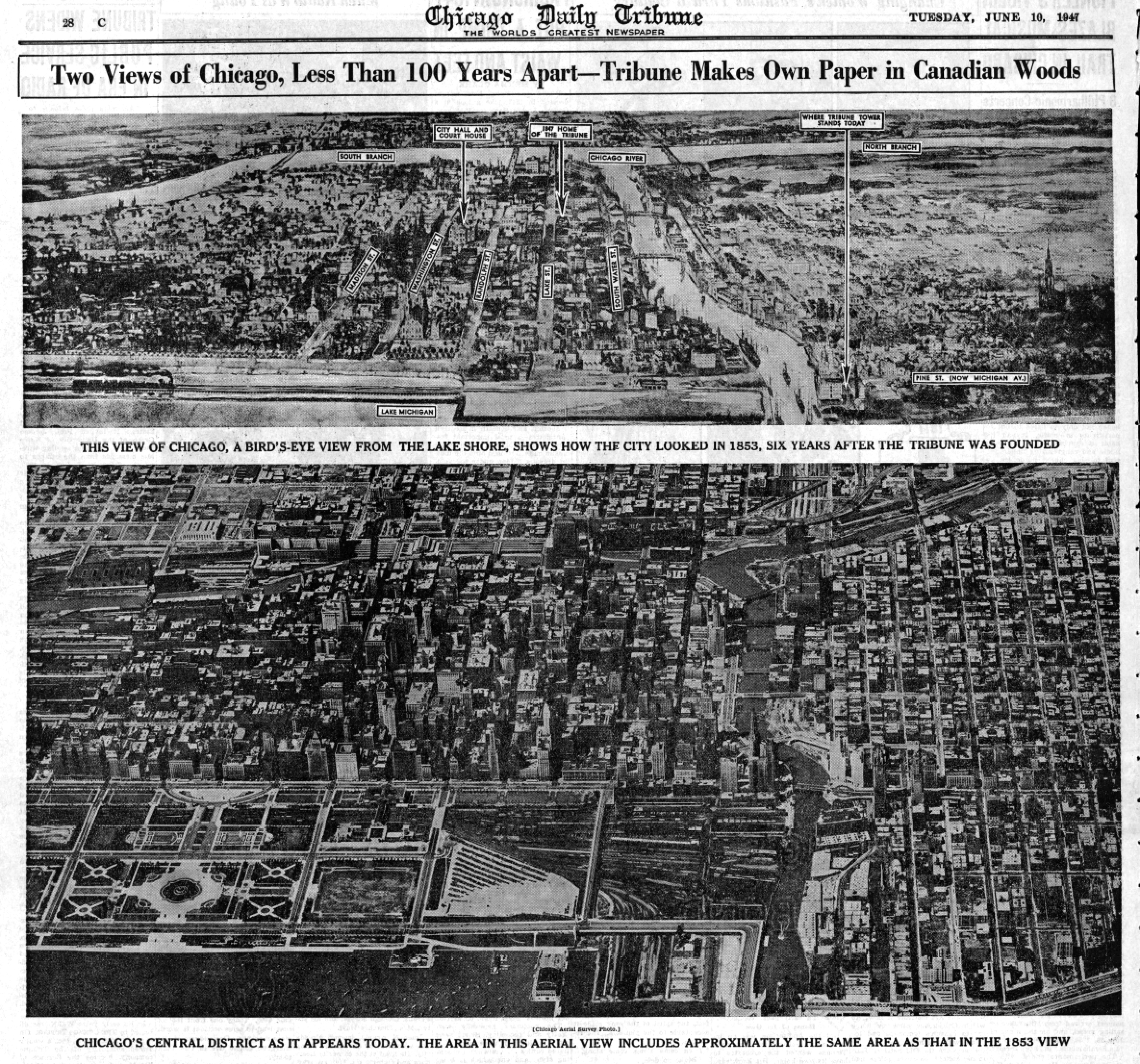