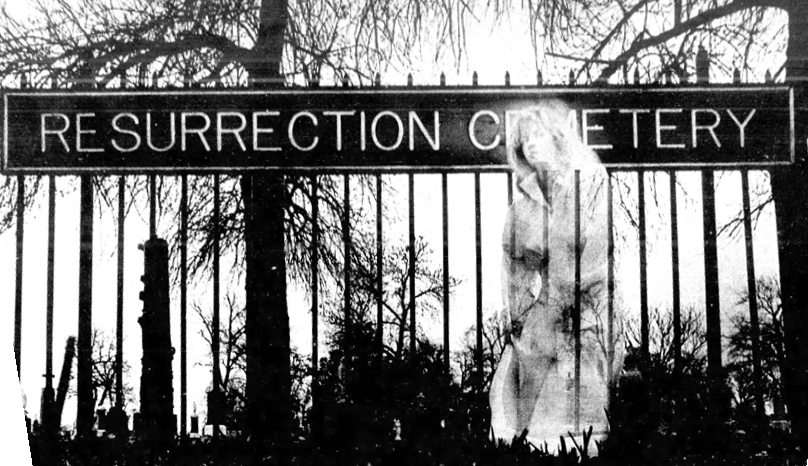 Resurrection Mary (portrayed here by Jenna Harvey) floats mysteriously in and out of the lives of travelers near Justice.

SHE’S A BLOND GIRL, about 19, Polish, and with a perennial penchant for dancing. She hangs out on South Archer Avenue in a long, lacy white ballgown, and she hitchhikes. In the 1930s, she hopped on the running boards of cars, demurely requesting rides to and from dance halls. These days, she reportedly has been hopping into young men’s cars at stoplights, gibbering incoherently about needing a ride—down Archer, if you please, and slow up as you go past Resurrection Cemetery.

If you’ve got any ideas about taking her dancing, forget it. The damsel’s a ghost, one of Chicago’s most famous. Dating from the 1930s, she even has a nickname—”Resurrection Mary”—for the cemetery at 7200 S. Archer Rd., Justice, where she invariably leaps out of the car and disappears.

THE LEGEND of Mary is one of the many, involving ghosts and haunted places, that have grown up in Chicagoland over the years. Haunted cemeteries, ghostly visitations in churches, ghost lights, mysterious weeping, even a “disappearing house,” all are part of area ghost lore, collected by Chicagoan Richard Crowe (1948-2012), a man who spends much of his time tracking down psychic phenomena and even leads tours to “ghosts” favorite haunts.

Crowe’s found a number of sites in the area that the like-minded or just plain curious might find worth a visit (and what better time than Halloween, though none of the ghosts involved appear to pay much attention to the calendar?). But it’s South Archer Avenue’s famous “hitchhiking ghost” that interests most.

HITCHHIKING GHOSTS—usually women, who beg rides from strangers and then either get out at cemeteries or disappear before the driver’s eyes—have long been staples of folklore and ghost legends throughout the world. Chicago, Crowe says, can claim at three ethic varieties of the phenomenon: Jewish, Mexican, and Polish.

Resurrection Mary, according to Crowe, hails from Resurrection Cemetery and haunts Archer from Ashland Avenue to Willow Springs.

Supposedly killed in a car wreck en route to a dance in the’30s, Mary apparently was buried in her dancing slippers and has refused to stay still ever since.

In years past, young men used to report picking up a girl fitting Mary’s description and taking her dancing, frequently at the Willowbrook Ballroom, in Willow Springs. She’d seem friendly, they said, but a little “chilly.” On the way home from the dance, the same thing happened to each of them; Mary would jump out at Resurrection Cemetery and vanish. Other men (Mary apparently had no interest in women) have reported picking her up on Archer Avenue as she tries to flag a ride “home” from a dance.

Over the years, Mary’s physical appearance has remained constant, but her mental state seems to be deteriorating; Mary, in fact seems to be going crackers.

“Lately,” Crowe says, “the reports I’ve gotten seem to indicate Mary’s on the verge of a breakdown. She’s reportedly jumped in young men’s cars when they stopped for a light on Archer, and she’s been incoherent. She acts hysterical as they ride along, then jumps out, always at the cemetery.”

The most recent report Crowe has of Mary concerns an incident that occurred last Christmas season. Two boys, walking down Archer Avenue, noticed a blond girl, dressed in an old-fashioned-looking ball dress, “dancing down the street, acting weird.” The kids, who never heard of the legend, went home and told their parents. In turn, their parents, who’d grown up hearing about dancing Mary, told Crowe.1 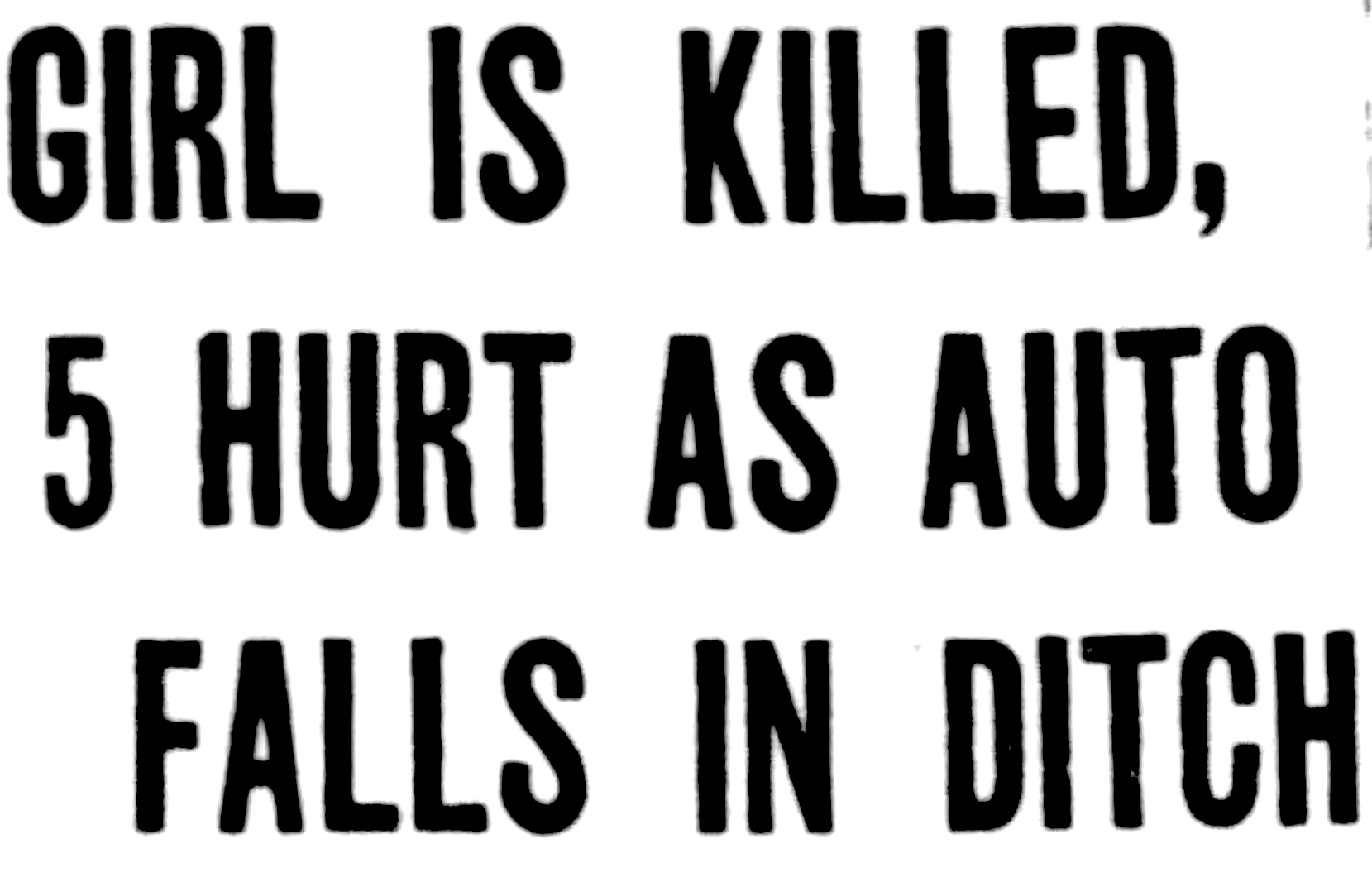 One girl was killed instantly and five other members of an automobile party were injured, one probably fatally, last night when the automobile in which they were riding went off the road into a ditch and overturned at Harlem aveue and 66th street, near Argo. 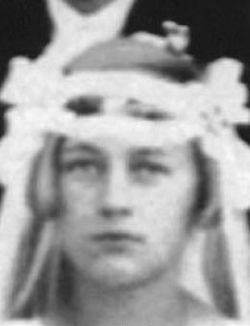 Adam Lepeiki (Lepinski), 56 years old, 3456 Auburn avenue, was the second victim of a crash Wednesday night which has aroused Coroner Wolff to demand the elimination of a hazard at the scene. He died yesterday. Anna Norkus, 12 years old, 5421 South Neva avenue, was killed instantly, and four others were injured as their automobile plunged into a 25 foot gulch where Harlem ends at 66th street, near Argo.

William Wesnor (Weisner), 32 years old, 3148 Auburn avenue, driver of the car, was going east in 63d street. The street is closed for repairs east of Harlem road, he detoured south on Harlem. The route provides for turning east again on 65th street, but this is little more than a trail and is not marked. Wesnor missed it and hit the end of the road a few blocks farther south, plunging into the ditch.

Ask Mark for Detour.
A coroner’s jury, under Deputy John J. Dedrick, inspected the scene and advised Argo authorities and the county highway department to mark the detour.3

1 Double-exposure photograph by Karen Engstrom, published in Chicago Tribune, October 31, 1985.
2 Anna Norkus was born in Cicero, Illinois in 1914. It has been suggested that Anna Norkus called herself “Marija.” According to a later inquiry, the party was driving home from the Oh Henry Ballroom in Willowbrook, Illinois. The accident took place about 1:30 a.m.
3 The Death Certificate of Anna Norkus states that she was to be interned at St. Casimir, however, during this time many gravediggers were on strike and several bodies were buried in temporary graves at Resurrection Cemetery till the strike was over and would be moved to their permanent lot. It is possible that Norkus’ body was so decomposed due to lack of proper storage conditions that she was not able to be identified and remained misplaced at Resurrection.