The business clearly needed streamlining; the casualty would be the inefficient, labor-causing sack. In 1857, the Chicago Board of Trade introduced a wheat grading system, so that one farmer’s crop could be combined and stored in bulk with another farmer’s crop of the same grade. All the loose grain could be mechanically transferred from railroad cars to grain elevators, eliminating the need for laborers to load and unload sacks. The seller would walk off with a warehouse receipt, which he could trade, sell or use as currency in the marketplace. From the grain elevator, a buyer could have his grain transferred directly into a boat to be carried anywhere around the globe. By 1861, Chicago’s grain trade had increased to 50 million bushels annually —a rise of over 48 million bushels in a decade — supporting the city’s boast that it fed the world. 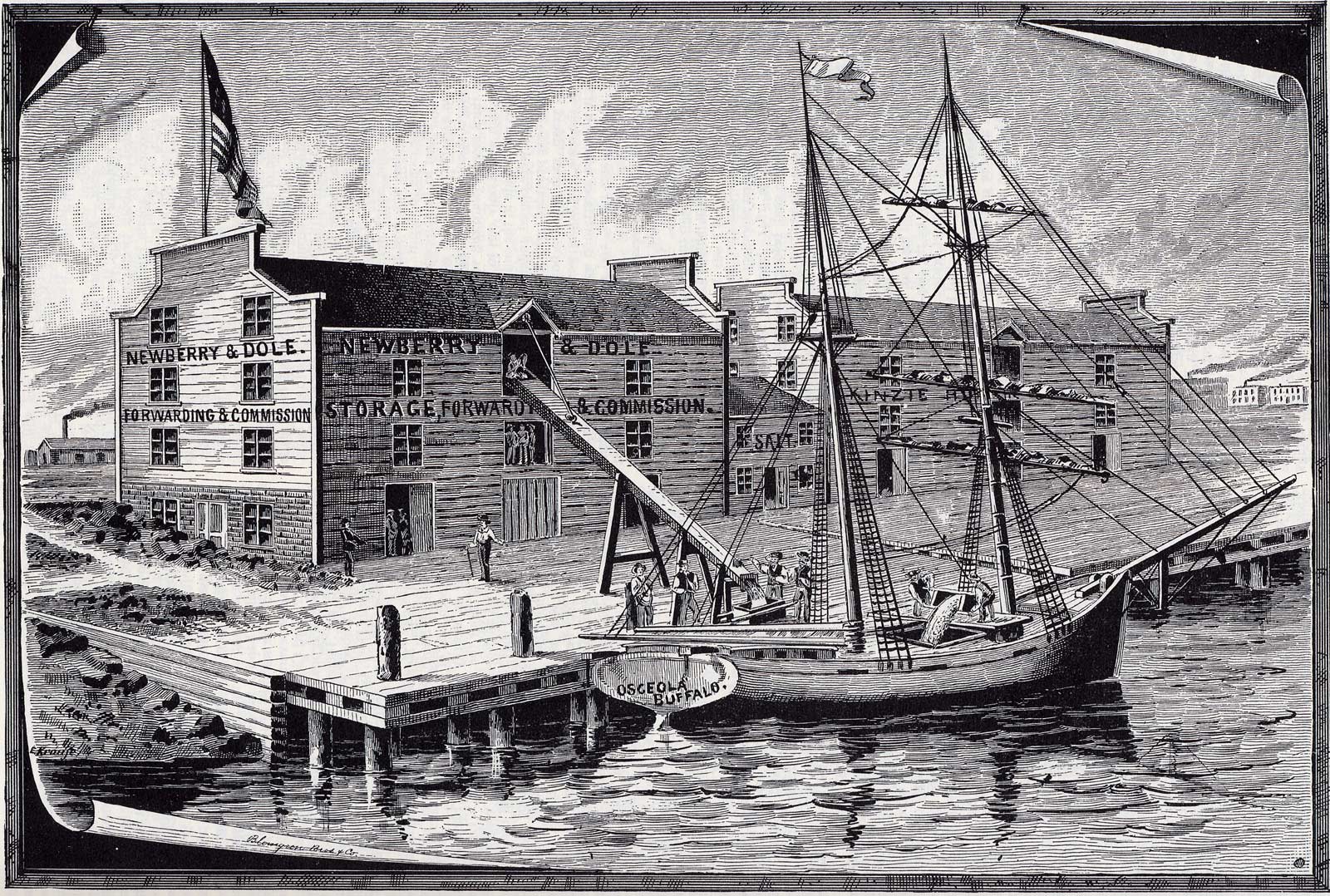 From Flinn & Sheppard’s Standard Guide to Chicago For The Year 1891:

The visitor to Chicago will be surprised and interested by a visit to some of the great grain elevators of the city. The greatest elevators in the world are to be found here, and they are more numerous than in any other city on earth. A few figures in relation to one of them will serve as a description for all. A grain elevator of the first-class costs about $500,000; 12,000,000 feet of lumber is consumed in its construction; the outside brick wall is sixteen inches thick; a fire wall, two feet thick, usually divides the building in the middle; the height is about 155 feet; length, 155 feet; as a protection against fire iron ladders run this entire height and on all floors there are electric push buttons communicating with annunciators in engine room, and in the latter department there is also a fire pump with a capacity equaling that of four steam fire engines. Two hundred barrels of water, each accompanied by a couple of iron pails, are scattered about over different floors, and twenty-two chemical fire extinguishers are placed at convenient stations throughout the structure; forty-five fire-plugs, to each of which is attached 1,000 feet of two and one-half inch rubber hose, together with fourteen fire alarm boxes, about complete the precautionary measures for combatirg the devouring element; the superintendent and chief engineer are located at opposite extremities of the bulky framework, the one in a separate brick office building, with an electric instrument within reach, by which he isenabled to converse with the heads of departments, and the other in a large two-story, fire proof brick building, where he takes pleasure in showing visitors a little bottle of river water after it has been transmogrified in passing through the granite filter. 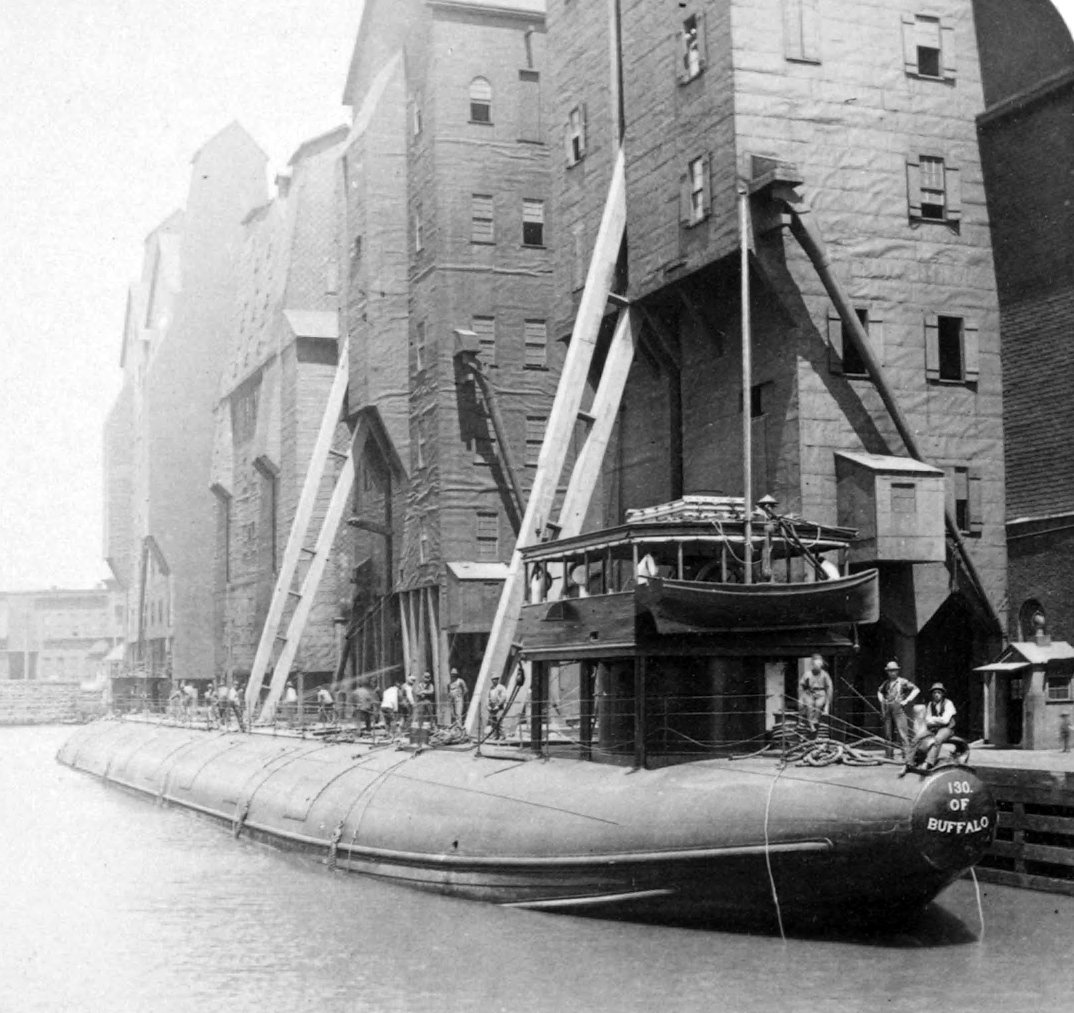 Once every week a fire drill is ordered, the time of turning in an alarm for which is known only to the watchmen in charge. When the alarm is sounded every man takes his place, but no water is thrown. These drills demonstrate that the structure may be deluged with water in exactly seven seconds. It requires 100 employesto run a grain elevator; to move the ponderous machinery a 1,000 horse-power Compound Corliss engine is required, making fifty-six revolutions per minute without varying one revolution in a day’s run. This is one of the most elaborately finished pieces of mechanism in existence, and was constructed at a cost of $50,000. The diameter of the drive-wheel is twenty feet, and that of the shaft eighteen inches. Crank bins fourteen inches in diameter and fourteen-inch steel pins are provided, the momentum of which adds impetusto the work of the engine. The main belt is of rubber, 200 feet in length and 5 feet in width. It is the largest bit of ribbon ever manufactured from any material by any firm for any purpose, requiring special machinery in its construction. The chimney of the elevator has a 14-foot base and an altitude of 154 feet. 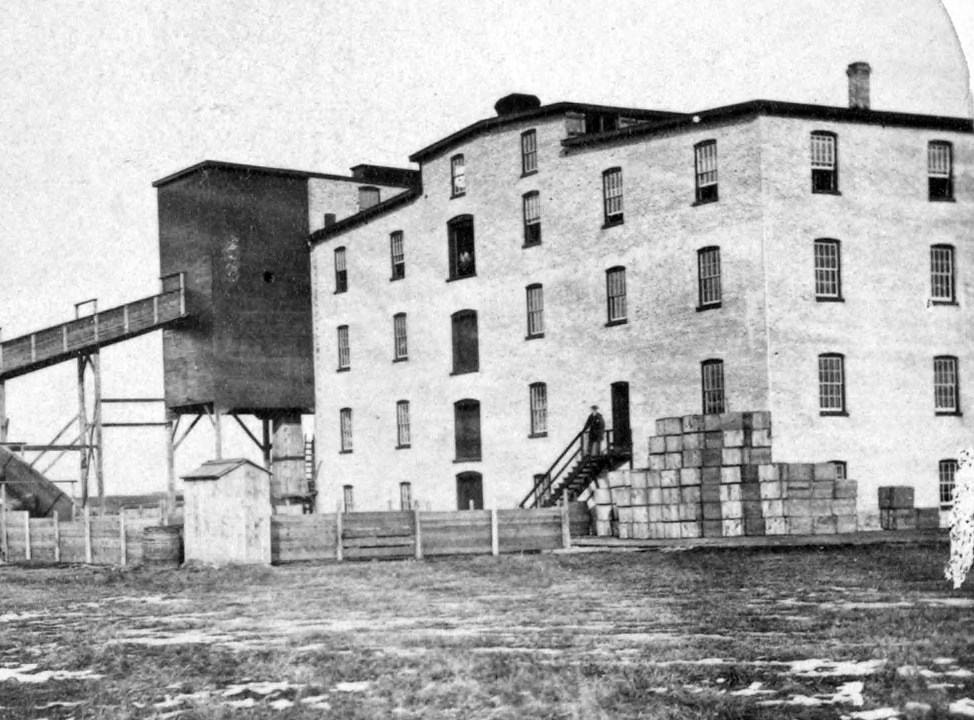 The manner of handling the grain by these great warehouses is as follows: Upon leaving the cars the grain falls through an iron grating into the hopper beneath the floor, and is immediately carried by the elevator buckets up to the cupola, a distance of 155 feet. There it is discharged over the “heads” of the elevators into scale hoppers, twelve in number, each having a capacity of 2,000 bushels. The first, or receiving floor, is twenty feet in height. The second is called the bin floor. There are 379 bins, or, since a portion of them are divided into three partitions, 428 receptacles in all, each 66 feet in depth, and made to hold from 1,700 to 6,500 bushels, the latter figures representing the capacity of the 879 undivided cribs. Above this floor is the “spout,” ” turn-table,” or ” revolver ” floor, as it is variously designated. Around each spout are grouped in a circle a dozen or more funnels. The spout revolves and readily connects with these funnels, and by having a number of these revolvers grain is distributed to any of the bins. Next is the scale floor, where twenty-eight large Fairbanks scales do the weighing, and then comes two shaft or machinery floors. Arriving at the scale floor we find the car loads of grain have been weighed and are being distributed by means of the revolvers into the diiierent bins, according to the various grades. In a small ofiice on the scale floor is a long blackboard lined off into squares and marked with the number of each bin. The grain is never moved without being first weighed, and this slate enables the weigher at a glance to tell what kind and how much grain he has on hand.

When it is desired to ship grain it is drawn from the bins into a hopper on the ground floor, taken up shipping elevators, twelve in number, and discharged into garners above the shipping scales, sixteen in number, and weighed by draughts of 500 bushels at a time, which are equal to 28,000 pounds. It is now run into a shipping bin, whence it is conveyed to the hold of a vessel, for which purpose there dangle from the side of the building sixteen dock spouts. If shipment by rail is desired, a separate track for that purpose enters the warehouse, and the cars are loaded in much the same manner as are vessels, with this exception, that as the grain enters the car it is thrown, by means of an improved bifurcated car loader, in opposite directions, so that both ends of the car are filled simultaneously. On the land side of the building is a long row of windows where wagons may be loaded.

The “marine leg” is worth describing. It is a device ninety feet in length, vertical, consisting of an endless belt in a movable leg, to which belt is attached buckets capable of carrying eighteen pounds each. The elevator is carried on guides, and will lift sixty feet, taking grain from the hold of the largest propeller at the rate of 10,000 bushels an hour. With the marine leg, vessels holding 50,000 bushels are unloaded in five hours.

Our elevatois are supplied throughout with every known improvement for successfully conducting this branch of business. ‘Facilities for handling hundreds of tons of grain by means of the elevators are complete. Either a single one or the entire twenty-eight elevators may be run or thrown out of gear at the will of the operators, and the stuff may be tossed about from the bottom to the top of the gigantic building and back again, or from (Sue end of it to the other and return, without the loss of scarcely a berry.

On September 25th 1890, the new propeller America (US No. 107367), the greatest carrier on these waters, took her initial cargo, consisting of 95,000 bushels of corn, in one hour and twenty-five minutes.

While grain in itself isn’t especially combustible, grain dust and oxygen form a volatile mix, and elevator explosions were the result. The complex along Damen owes its existence to just such an explosion. Its predecessor elevator, along the river a bit to the east at 27th and Wood, was a five-story, 400 feet wide and 175 feet long frame structure covered in corrugated sheet iron. Its 60 bins could hold a million and a half bushels. In September of 1905, a spontaneous combustion at the top of one of the wheat bins had the elevator engulfed in flames before the first fire truck even arrived. The elevator was destroyed at a loss of $300,000 for the building and another $500,000 for the 845,000 bushels of overly-toasted grain – staggering sums for that time. 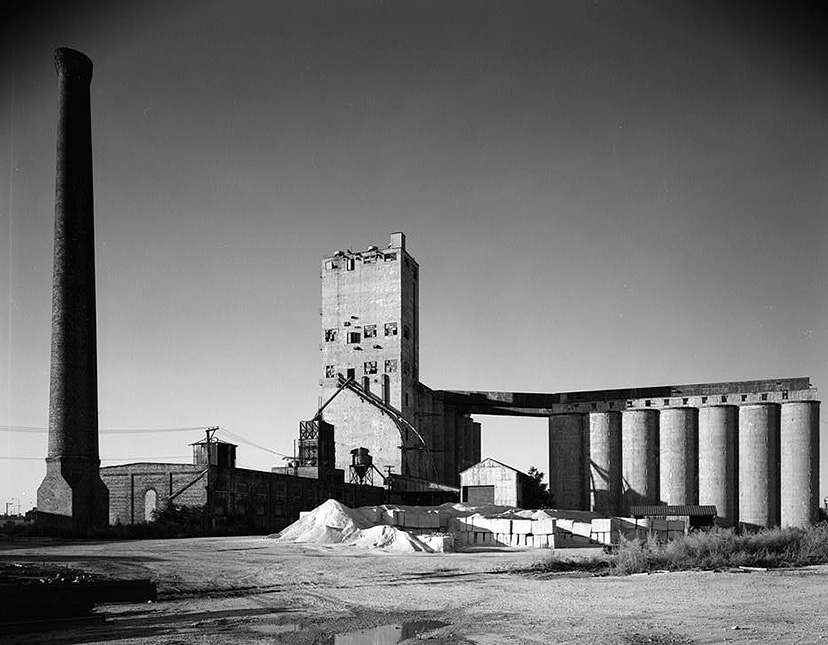 A new elevator, designed by John S. Metcalf, was built the next year to the west, at the Damen Avenue location. In addition to the 35 storage silos with a capacity of one million bushels, there was the tall elevator, a long-vanished 165-foot-high smokestack, and a powerhouse whose boilers drew filtered water from the river to generate the 1,500 horsepower of steam and electricity that powered the elevator’s operations. There was room for 60 rail cars on site, and another 300 a short distance away. 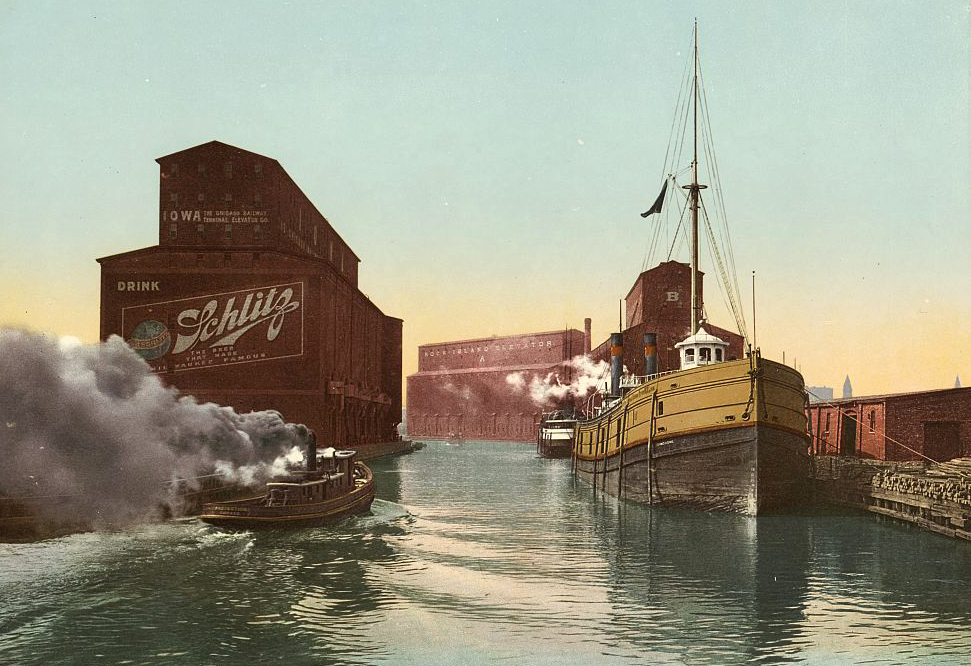