The year 1890 witnessed the establishment of a ship-yard capable of turning out vessels of the best type for lake navigation. Prior to this no iron or steel vessels had been built at Chicago. This new enterprise has been undertaken by the Chicago Shipbuilding Company, composed of experienced steel shipbuilders, who have located their works on the Calumet river, at South Chicago, about a mile above its entrance into Lake Michigan. 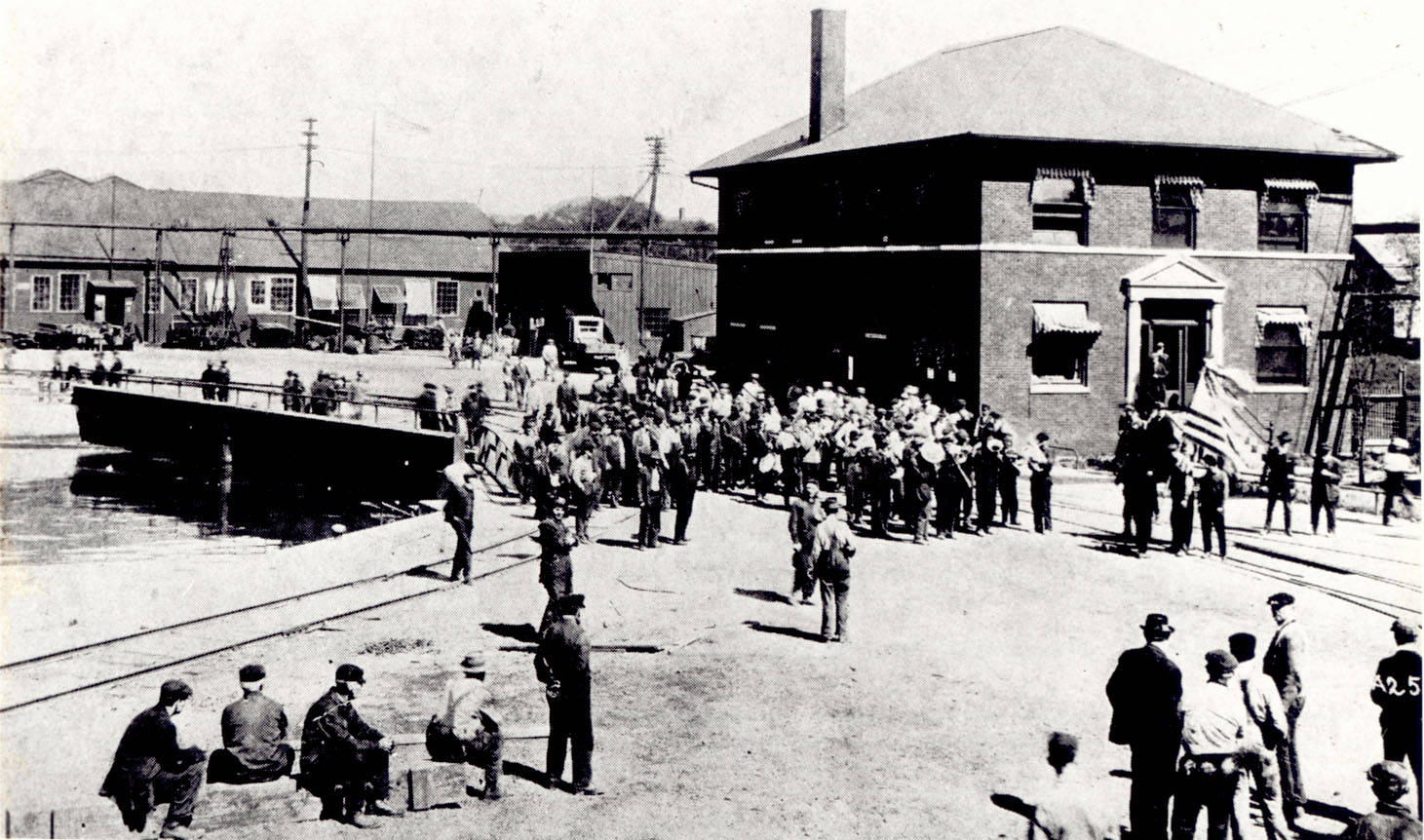 With a river frontage of about 1,400 feet and an average depth of over 600 feet, the works cover over twenty acres, affording ample room for the shops necessary for all the various trades and occupations concerned in
the building of the complete ship, with large storage ground for material besides. Atthe south end of the property, three slips, each 400 feet long by 100 feet wide, have been excavated to a depth of twelve feet of water, at a right angle to the river, whose sides give berths for building six ships of the largest class at one time, which will be launched sideways into the slips. Across the heads of the slips, equally convenient and accessible to all the berths, stretches a building 540 feet long by 75 feet wide, containing the boilers and shop engine, heating furnaces for plates and angles, blacksmith shop, plate and angle shops, small machine shop, pattern shop, and in the second story a mould loft with a clear floor 200 feet by 50 feet Here the lines of the ships are laid down full size from the models and dimensions furnished from the drafting office, and the wooden moulds made by which the steel angles and the plates are shaped. The shops below are filled with machinery of the latest and most modern types—shears, punches, planers, counters-sinkers, rolls, etc.

The steel comes into the yard from the mills over a side-track from the Calumet River railroad, a branch of the Pennsylvania system. It is unloaded from the cars and delivered to the shops by a traveling crane of sixtytwo
feet span, built by the Brown Hoisting and Conveying Machine Company, of Cleveland, Ohio. A system of overhead tracks in the shop carries it to the various tools, and leaving them, a narrow-gauge railway takes it to
the building berth. Here a steam cantilever crane of 120 feet span, built of steel by the same company, and running on trestle-work fifty feet above the ground, picks it up and delivers each plate, beam or angle to its appointed place. The engines will also be put in by thiscrane before launching. The boilers will be hoisted in place by a steel derrick on the river front after launching.

The company are now at work on their first contract, two steel steamers for the Minnesota Steamship Company, to go into the Lake Superior iron ore trade. They are to be 292 feet keel, 308 feet over all, 40-foot beam, and 24½ feet deep, with triple expansion enginesand steel boilers, and are to be ready for the opening of navigation this year.

By 1900, just after it became part of the American Shipbuilding Co. (also based in Cleveland), the Chicago Ship Building Co. employed 1,200 men and ranked as the leading builder of steel ships on the Great Lakes. The company, which remained part of American Shipbuilding, continued to operate on a relatively small scale through World War II; it never regained the leading position it had held in the 1890s.