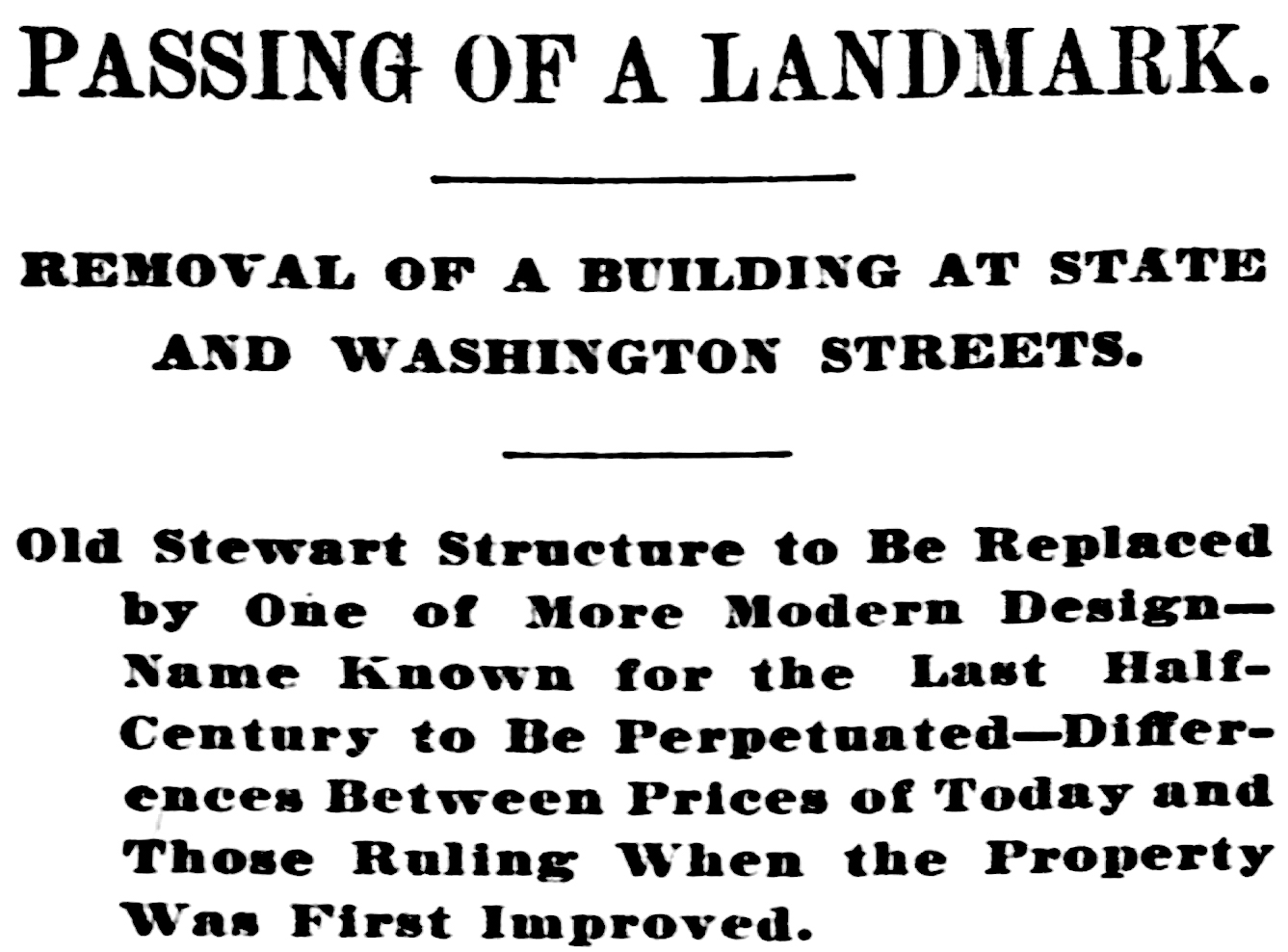 Stewart’s corner, State and Washington streets, has undergone a great change within the last few days. The building which has stood on it for almost a quarter of a century, and which has during the last few years of its history been one of the landmarks of State street, being rapidly torn down.

Although the old building sold for only $3,000, it cost sixty-two times that to build it. For years it was considered one of the handsomest in the city and was the model of many of the older buildings now standing i State street or scattered throughout the business district.

But the creation of the modern office building meant the doom of the old corner, for Stewart’s corner has regularly undergone an upheaval the building which adorned it was proven to belong to another generation. So a new twelve-story terra cotta structure is going up on Stewart’s corner, which will be as much a revelation to these times as was the first house which ever stood on the lot in its days, and which was built by Gen. Stewart in 1844, or as was the St. James in 1858, or as the building, which is now almost torn down, was in 1873.

All three of the buildings which have stood on Stewart’s corner were built and owned by Gen. Hart L. Stewart, and as the ground is still owned by his heirs and the new building isb to be called the Stewart Building, it is probable the name by which the corner has been known for half a century will be as familiar to coming generations as it has been in the past. 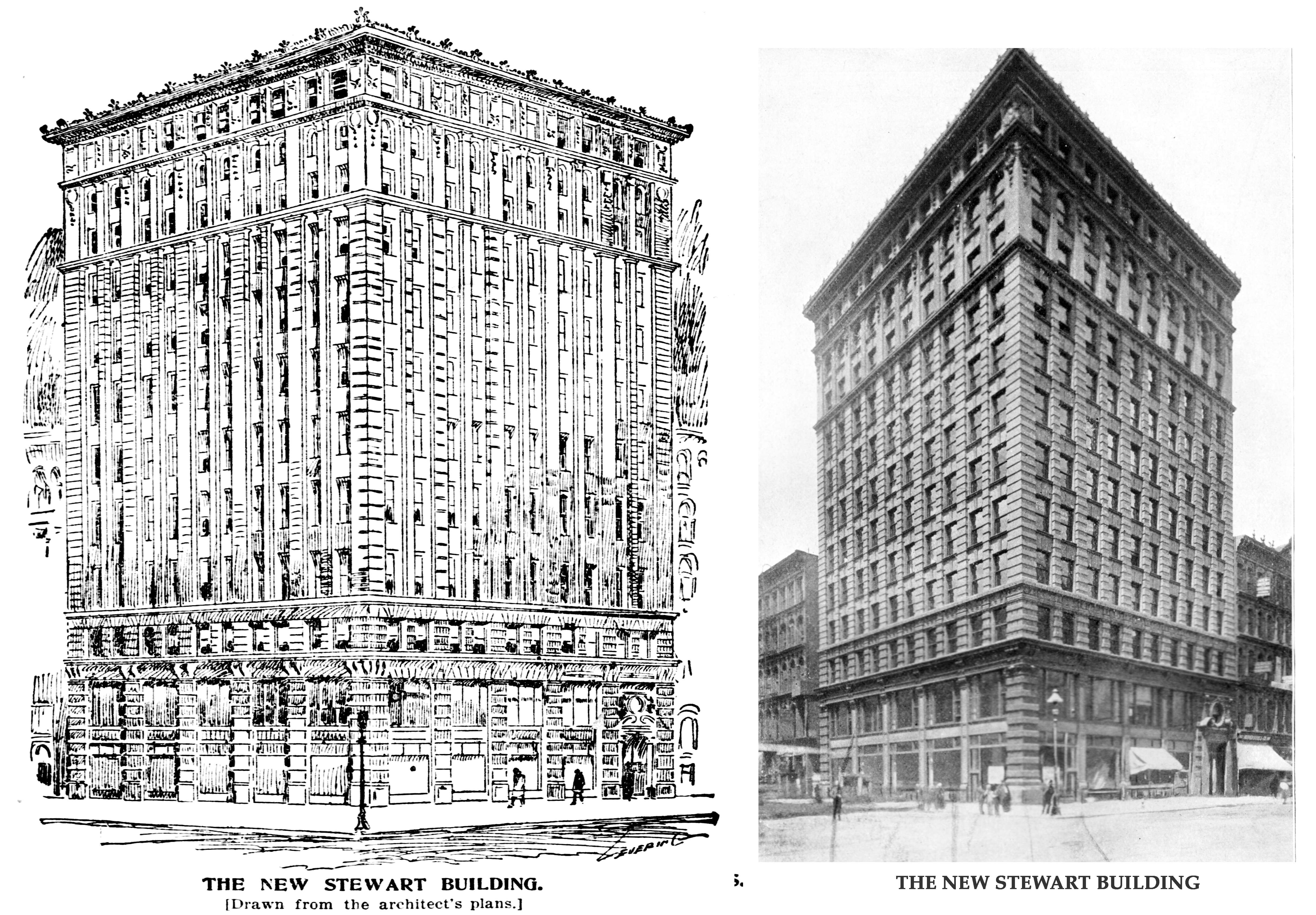 Gen. Stewart received the original deeds for the land from the Illinois and Michigan Canal Commissioners, who were granted the property by the government. The next year the General built a handsome house, in which his family resided for many years. Before he built his house Gen Stewart had to have the sand in the lot taken away by the cartload and replaced by black dirt hauled from the sloughs. 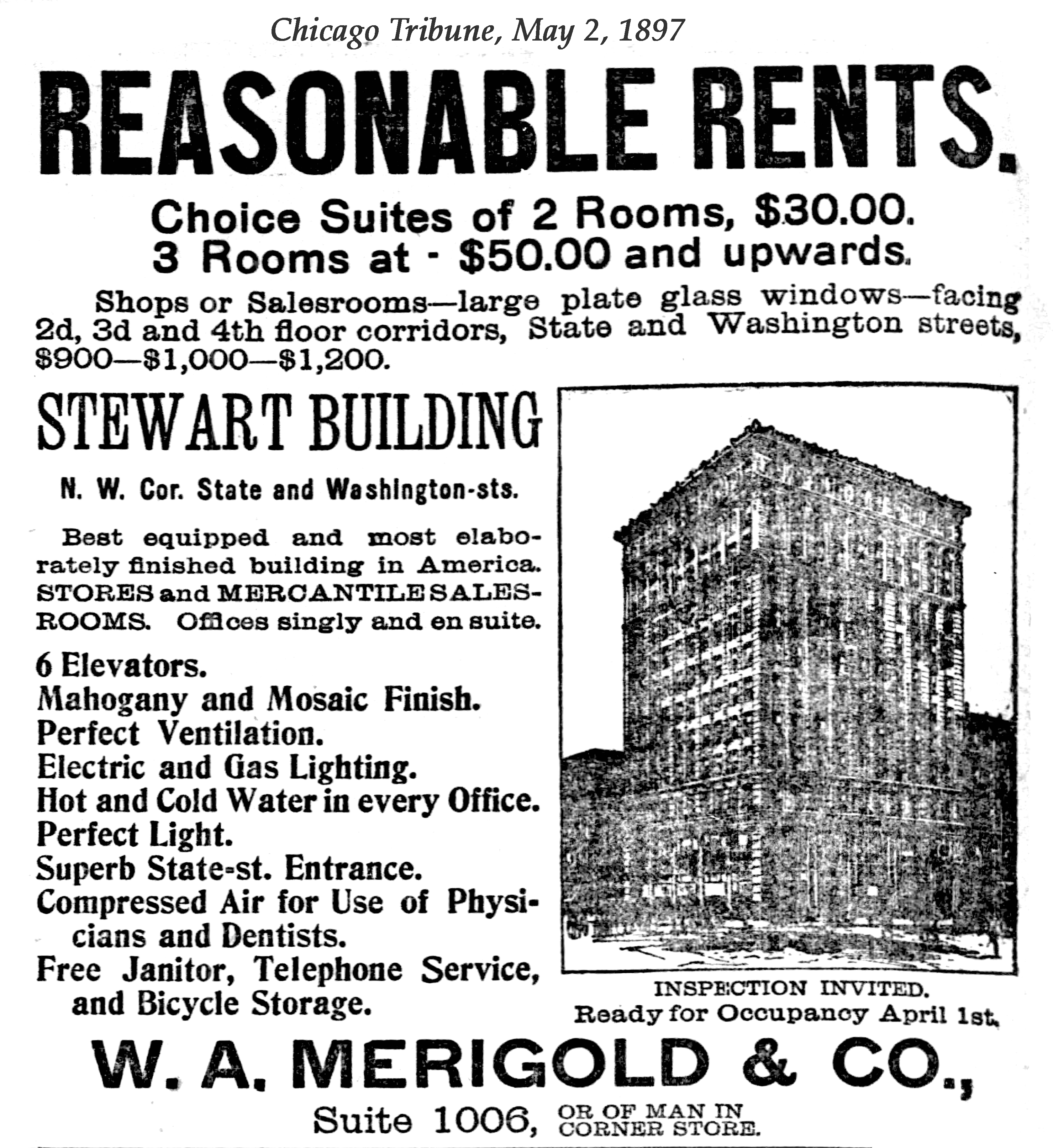 After the business part of the rapidly growing had spread south and east of Stewart’s corner the old house was moved away and the St. James Hotel was built on the lot. It cost $90,000, a big price back in 1858, and for a long time was on of the finest buildings in the city. On the ground floor the hotel building were three stores, which were rented for an average og $3,500. In startling contrast to this is the amount paid merely for ground rent by the company putting up the new building. The sum of $56,000 annually is to be paid for the first five years, $64,000 for the next five, and $75,000 each year for the remainder of the term of the ninety-nine years’ lease.

The great fire wiped out the historical St. James, and then Gen. Stewart erected the building which is now being torn down.

One of the most familiar features of the old building was Lapp & Flershem’s big clock. which was in the center of the building on the second floor. More people have regulated their lives by that old clock than by any precept in the neighborhood of State or Washington street, with his watch in his hand and gazing vacantly around in every direction. It can be set down he is looking for the old Stewart clock.1

PERMIT FOR TALL BUILDING.
STATE AND WASHINGTON STREETS.
A permit was secured yesterday afternoon for the erection of a twelve-story and basement brick office building, with stores on the first floor, at 92 to 98 State street, at the Washington street corner. The structure will be known as the Stewart building and
will be owned by a stock company.

It will cost 8500,000 and will be ready for occupancy by April 1, 1897. The work on the foundations was begun several weeks ago D. H. Burnham & Co. are the architects and the George A. Fuller Company the the contractor.

In connection with the many defaults on office building company obligations now occurring, it is improbable that the Merrimac Building Company will be able to meet the interest on its $300,000 6 per cent bonds, due Jan. 1. The bonds are secured by the Stewart office building property, northwest corner of State and Washington streets. The property is not earning money enough to take care of its ground rent. In fact, default has already been made on the ground rent payments. The bond interest was paid promptly July 1, though probably the money did not come from earnings. The bonds bear date of July 1, 1896, and run twenty years. They contain a $13,000 sinking fund provision. The bonds are pretty well scattered. Fuller & Co., the contractors, took most of them in payment for material and work and traded them off for equities in incumbered real estate. The Stewart building ground rental is now $55,000 per annum and the lease contains provisions for graduating it: up to $75,000 per annum later on.

Heirs of the Pullman estate have transferred to the Stewart estate the ground at the northwest corner of State and Washington streets upon which the Steward building stands. It will later be transferred to the Northern Trust Company, which will act as trustee. The ground, which has the dimensions of 91×90 feet, was conveyed to George M. Pullman in trust for General Stewart’s heirs. In 1892 it was leased to H.H. Kohlsaat and by him released to the Merrimac Building Company for a term of 102 years at a graduated rental from $47,350 to $75,000 a year. The property has an incumbrance in the form of a first mortgage for $140,000, and another mortgage for $46,000 was placed upon it last week. 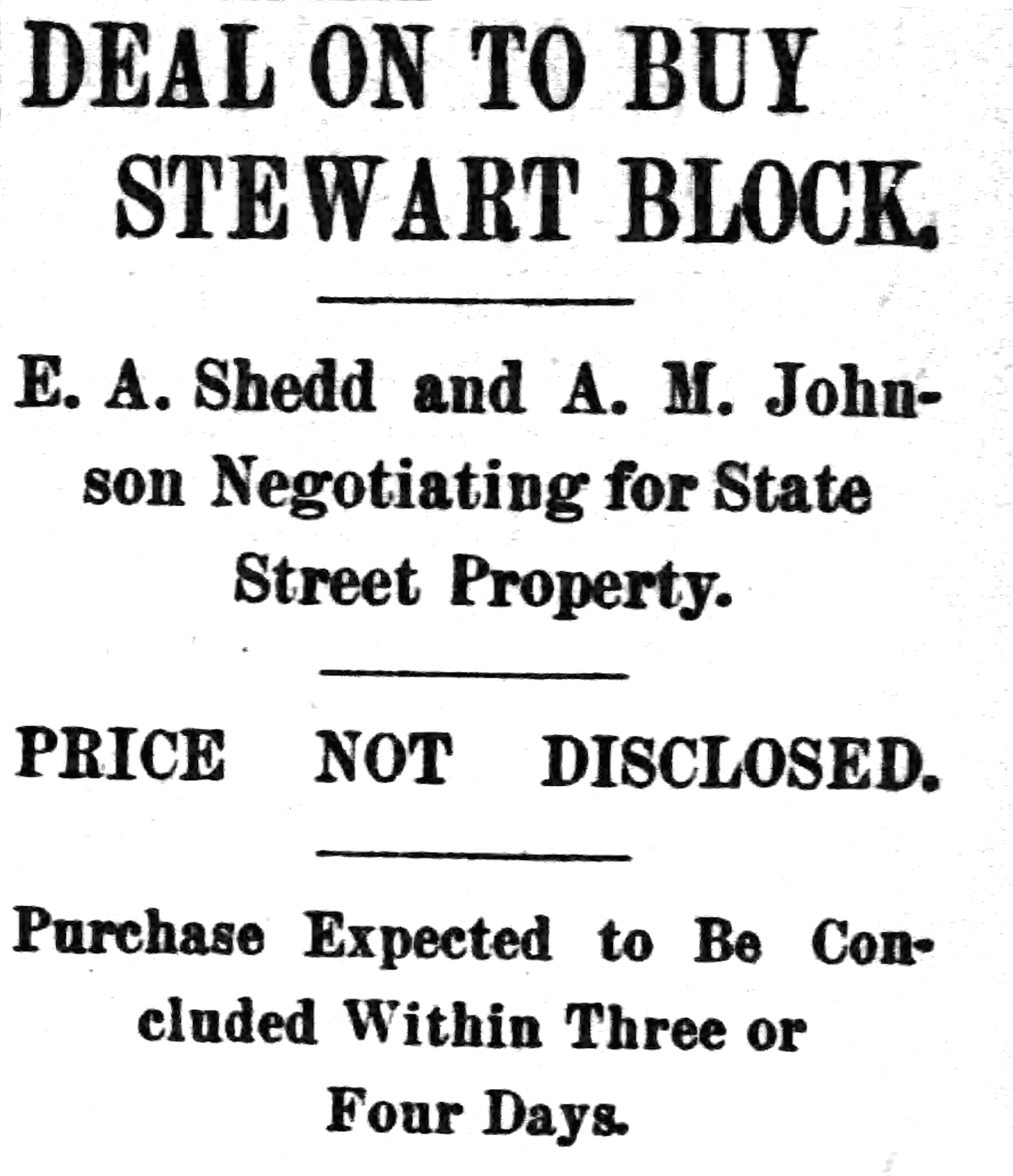 Negotiations practically have been closed for the purchase of the Stewart building and leasehold interest at the northwest corner of State and Washington streets by Edward A. Shedd and Albert M. Johnson. The latter is vice president and treasurer of the National Life Insurance Company of the United States of America.

The price to be paid is not known, but the purchase is said to be for investment purposes. Final papers are expected to be signed within the next three or four days.

History of the Building.
In March, 1896, Mr. Kohlsaat disposed of his leasehold interest to the Merrimac Building company for a bonus, it is said, of $100,000. The construction of the present twelve story building was begun then, and was completed at a cost of approximately $600,000. Through default in the ground rent the building passed into the control of the Northern Trust company as receiver representing the owners of the land.

The property is especially interesting by reason of the fact that it has always been in the Stewart family from the time when Gen. Stewart acquired the property from the lllnois and Michigan Canal commissioners. 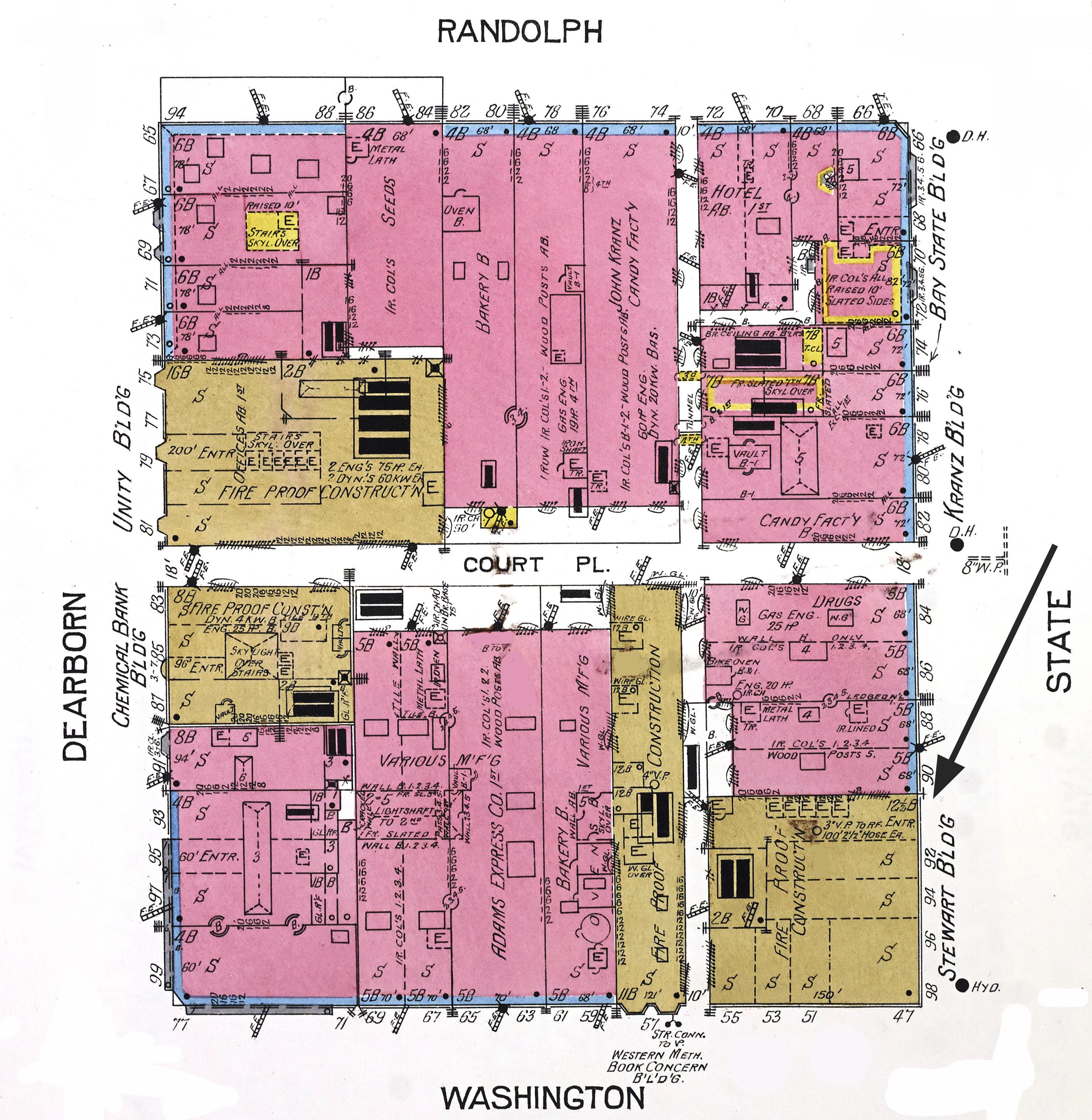