Horse Show Association
A new Horse Show Association has been formed in Chicago. The association is to be controlled by the syndicate of Englishmen whom operate the Tattersall company in England and in this country. The capital stock is $50,000. The building, which is on Dearborn street, between Sixteenth and Seventeenth, will form the headquarters of the association. It is rapidly nearing a finish and will be ready by the time the first exhibition takes place, Nov. 28. The show will be managed by the Tattersall club, which was formed at a meeting held at the Wellington Hotel yesterday. J. R. Walker was appointed President and C. F. Kimball Secretary. 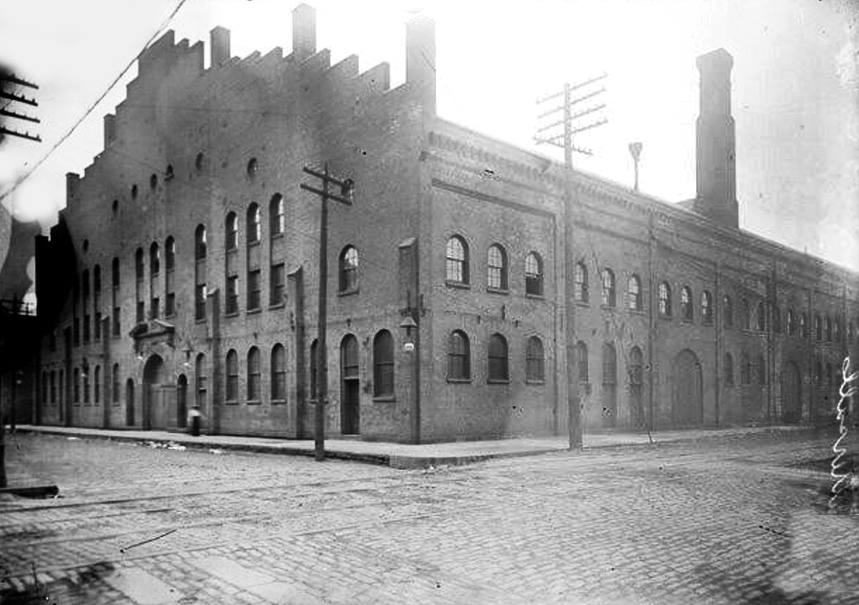 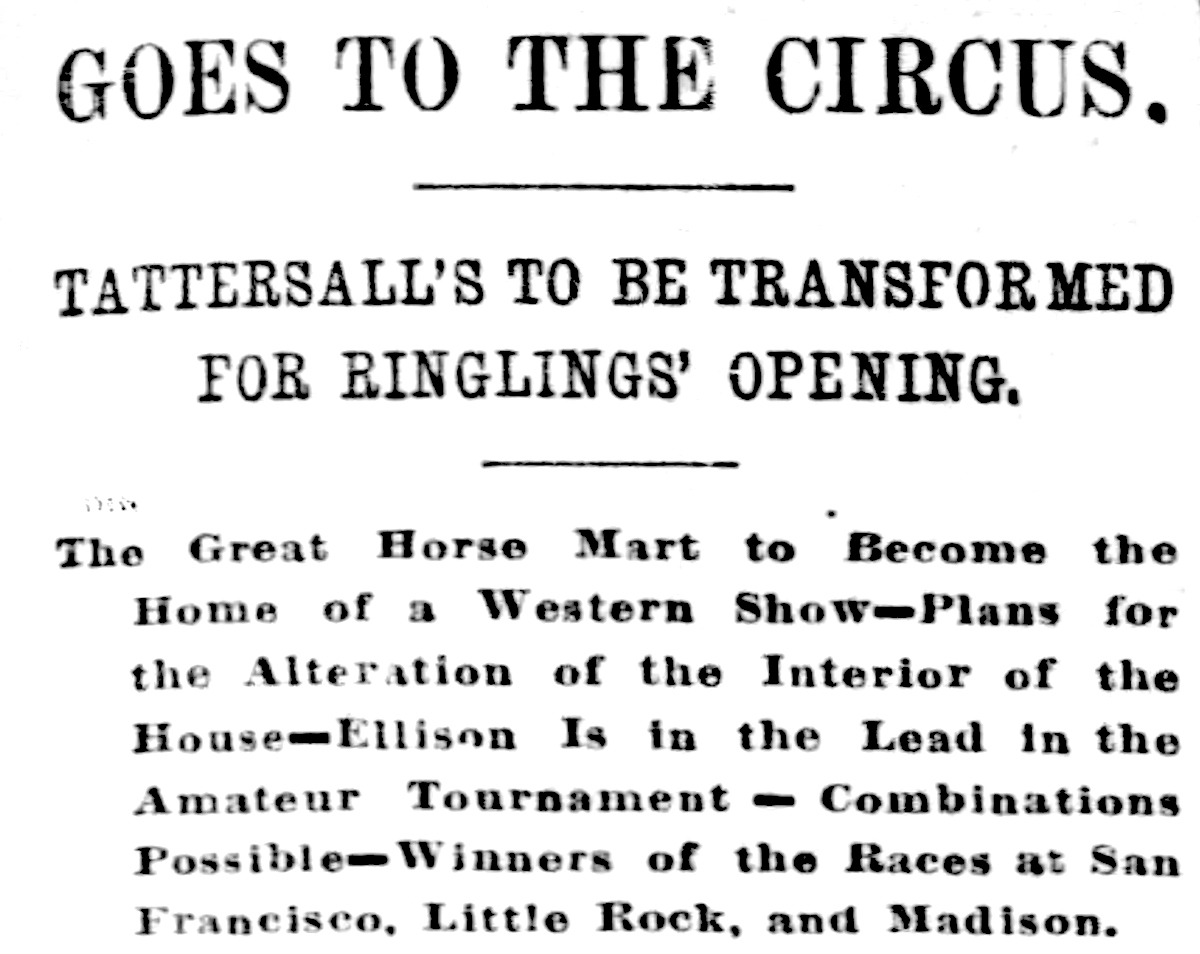 Negotiations, which have been pending for several months, for the lease of the Tattersall Building by Ringling Bros., the circus managers, have been completed, and the show will open its season there April 6. The Chicago engagement is for three weeks only, but it is understood the circus managers have an option on the building and will probably make their Chicago opening at Tattersall’s an annual event.

The Tattersall Building is the largest structure of the kind in the United States, with the exception of Madison Square Garden. The auditorium offers great opportunities, not only for giving circus performances, but also for accommodating large numbers of people. The area afforded by the tanbark track was demonstrated by the military tournament during the World’s Fair and also during the more recent stock show. The interior will, however, be entirely remodeled and refitted to meet the requirements of the circus and hippodrome. The plans, which have been prepared by a Chicago architect, contemplate three rings, two stages, and a hippodrome track extending the length of the building, inclosing the arenas. The solid nature of the track, which has been amply tested, is expected to insure satisfactory racing. This feature will, it is announced, be an important part of the exhibition. 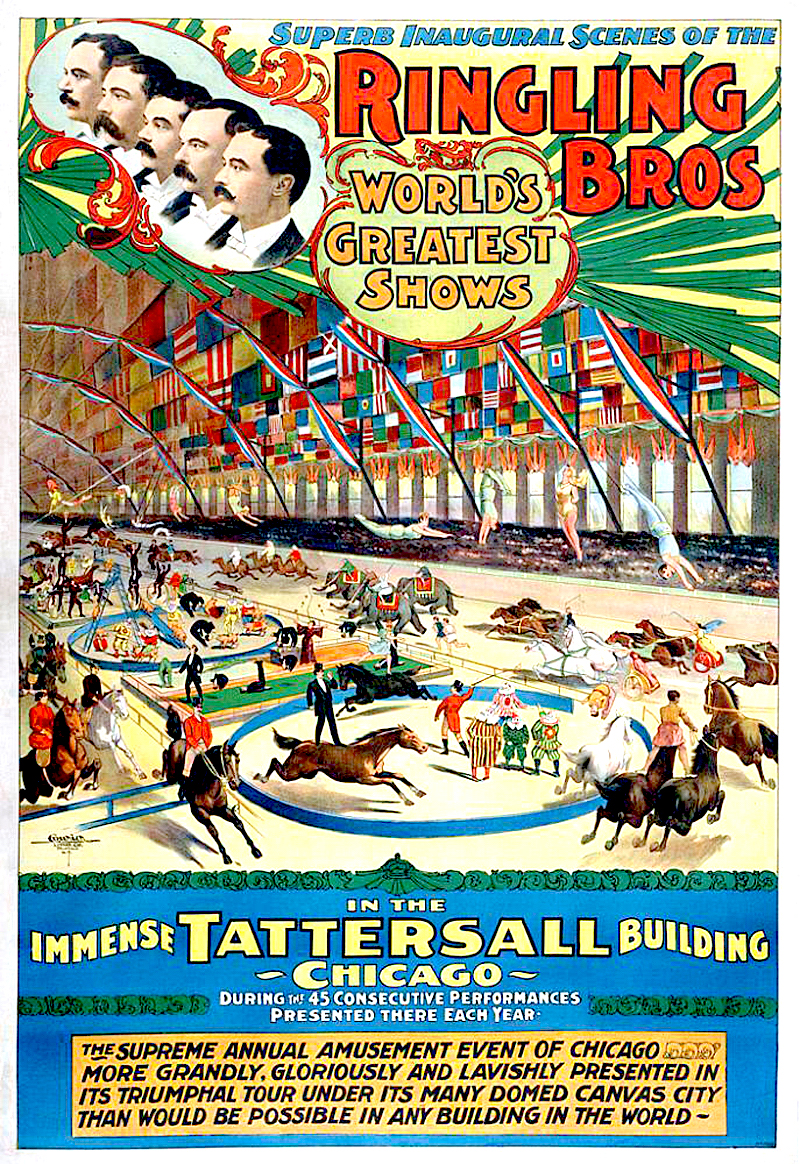 The plans for reseating the building are comprehensive. Comfortable chairs will be used, and several tiers of loges have been provided. The decoration of the interior of the building generally promises to be unusually attractive. The glass roof of the Tattersall Building admirably fits it for day performances.

The menagerie is to be inclosed within a spacious promenade, constructed under the seat platforms. The space is at the disposal of the architect for this purpose is so considerable that it will not be necessary to provide stationary cages, and the huge animal dens used by the show “on the road” can be utilized and displayed there with their contents. Adjoining the menagerie will be a large apartment known as the “horse fair,” where the 400 horses owned by the show will be exhibited.

On the Dearborn street side of the building there will be no extensive alterations. The plans, however, contemplate an entire reconstruction of the State street entrance. There the ornamentation will be elaborate and the electric lighting effects striking and effective. Several additional exits will also be provided, so that the audience may, if necessary, be dismissed within a few minutes.

Ringling Bros.’ circus is peculiarly a Western institution. It is expected that by means of their reputation and abundant capital they will be able to popularize Tattersall’s and incidentally increases the value of property in that section of the city. The Ringling Bros. announce the performances to be given there will be of the highest character and that the people engaged embraces many of the best known performers of this country and of Europe.

As an incident of the deal the new manages of Tattersall’s have arranged with all the railroads centering to Chicago to run special excursions to the show, and it is expected that thousands of people will thus be brought to the city from within a radius of seventy-file miles. 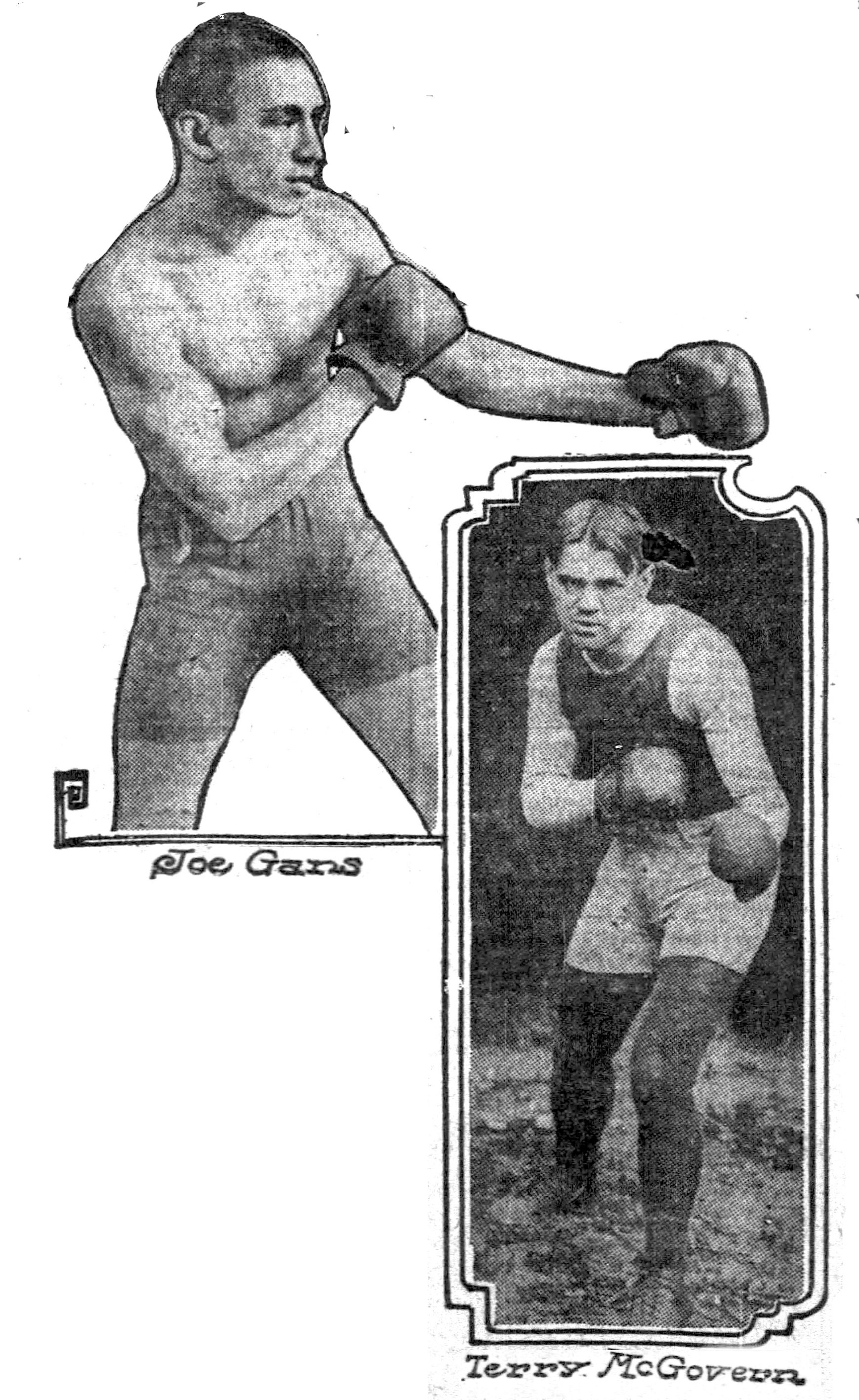 Chicago’s last pugilistic landmark will soon be a memory; also a blotch of clear daylight where once steel and masonry reared on high.

Tattersall’s is being wrecked. This great exhibition building on the southwest corner of Dearborn and Sixteenth streets was once the scrap hub of the mid-continent Prize fights, alias boxing exhibitions, here held away for a golden period which ended with a sudden thud in December, 1900. As in the case of San Francisco, fighting was terminated just as a ring appearance of James J. Jeffries was being arranged. In Chicago, however, the mayor, and not the governor of the state, was the grim assassin of ringside hopes.

An alleged “fake” bout, Terry McGovern versus Joe Gans was the windup event in Chicago’s official milling history. The scrap was held on the evening of Dec. 13, 1900. That Gans “laid down” with a farcical attempt at cunning was so widely conceded that an uproar of indignation went up from Chicago’s sporting circles. The occurrence was the final stroke that induced Mayor Harrison and the city council to clamp the lid, unseating reluctance after delegations of ministers and reform fans had failed in their demands and pleadings.

Dire Prophecy for the Race.
What is regarded by local “coves wot loves to see a mill” as a prophecy of dreadful significance was uttered by Mayor Harrison on the afternoon preceding the Gans-McGovern fiasco, when he received a delegation of ministers who demanded that the fight permit be canceled.

“Prize fighting is no more brutal than football,” said the mayor to the clergymen.

“That is right, and football should be abolished, too,” said one of the supplicants.

“If you pursued that policy for two centuries you would have nothing but a race of ninnies and effeminates,” said the mayor.

“I would have a boy brought up to play football and box.”

Jeffries was scheduled to appear at Tattersall’s in an exhibition bout and was to “take on” two men, but the decline of the manly sport in Chicago had been sounded and the show was called off. Lou Houceman, then big chief in the Tattersall Athletic club, relates that Jeff did the “square thing” in this matter. He declined to accept expense money for a trip of himself and his party to Chicago although his arrangement authorized him to collect the money. 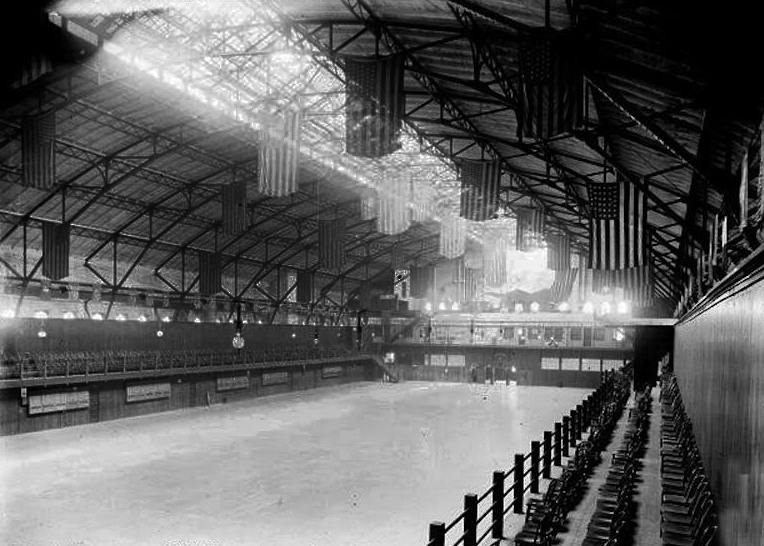 This Bout the Last Straw.
In the articles of the Gams-McGovern scrap it was agreed if the spade stayed in with the Irish terror for six rounds he was to be declared a winner. The affair is remembered with disgust and sorrow by all fight lovers acquainted with is “sordid” details. Gans was knocked out in the second round, after the weakest display of defense and not a zephyr of aggressiveness. In the second round he thumped floor several times before accepting the decisive sleep potion. Twice he hugged the timber almost for the full set of counts.

“I do not wish to accuse any fighter of faking,” wrote the late George Biler, the referee, in The Tribune the next morning, “but if Gans was trying last night I don’t know much about the game. Gans, of course, is entitled to the benefit of a doubt as to whether or not the number of body blows which Terry pumped into him in close quarters during the early part of the fight weakened him. But the facts remain the few blows he delivered were the weakest ever seen from a man of his known hitting power.”

A commercial side line of this highly commercialized “fistic” exhibition was a moving picture outfit, the first ever installed at a Chicago ring battle. Mercury lights were then unknown and the arcs burned down, a fiery frame to the frameup.

Lid Suddenly Clamped Tight.
Dire results came swiftly. Ald. J. C. Patterson of the Twelfth ward introduced a prohibitory resolution in the council on the following Monday evening. Forthwith the aldermen passed the anti-fight ordinance which, with Mayor Harrison’s signature, still acts as clamp on the fight cover. The ordinance in referring to the Gans-McGovern fray asserted that it “bore every evidence of a prearranged affair and a hippodrome of the rankest kind.”

What the ministers and Frank Hall failed to do a pugilist’s duplicity accomplished. Hall, former proprietor of the notorious “Maze,” was then on the reforming lay and appeared with the clergymen when they laid their petition before the mayor.

The decline of the sport in Chicago was abrupt. One of the most heart rending after effects was the elimination of Saturday night boxing exhibitions at the Chicago Athletic association, hundreds of blue book sportsmen being the sufferers. Walcott and Choynski had been billed for the next event at Tattersall’s, but the plans evaporated and a horde of minor “pugs” went on their way to other havens.

The most remarkable and altogether satisfactory battle at Tattersall’s was that of Kid McCloy versus Tommy Ryan earlier in the year 1900. They went six rounds which were, as Nate Lewis now describes them, “the finest ever seen.” At the end Referee Malachy Hogan gave the decision to McCoy and on the ruling the McCoy boosters cashed their bets. Later it was announced that the fighters had entered the ring with the decision that a “no decision” mill was to be waged. This was the seed of controversy which for a time almost reached the proportions of the Gans jawfest.

Prize fights were practically the only attractions financially productive at Tattersall’s. Rents demanded of the managers went up tyeaqr by year from the time Battery D was abandoned for the Dearborn street hippodrome. Another sporting event rivaling the horse shows, circuses, and the like was the good old six day bicycle race. Yusoff, the “terrible Turk,” wrestled with Evan Lewis under the roof now being demolished, and there added to the contents of the $7,000 gold belt which he wore when drowned aboard the sinking steamship Bergoyne.

Tattersall’s was erected in 1891 as a horse exchange, found its only peaks of success when the padded gloves were thumping and the fight fans were yelling within its walls. When the Seventh regiment, I. N. G., an organization largely manned by the world’s best fighting clan, abandoned it as an armory several years ago its death seal was practically affixed.

The fighting fans may drop a tear, but who ever saw a wrecking crew boss who had any sentiment?