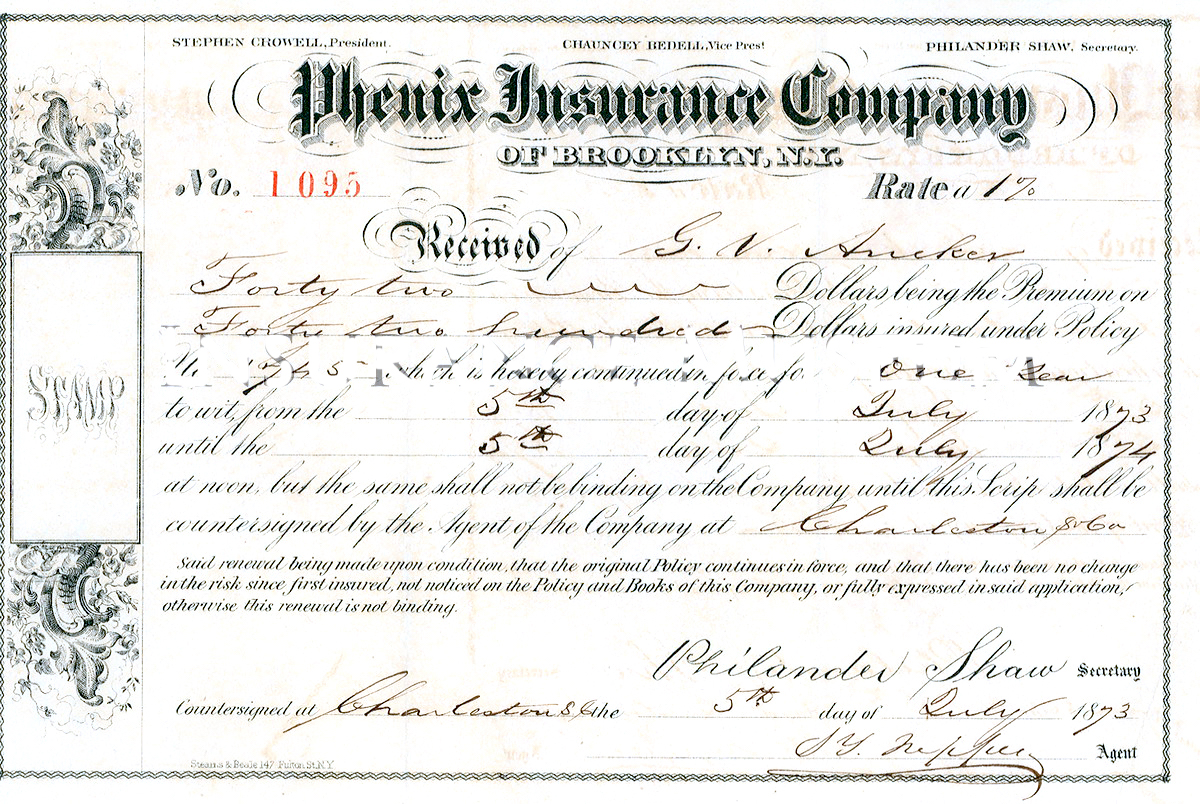 SALE OF THE MCNEILL PROPERTY ON JACKSON STREET—A GREAT OFFICE BUILDING TO BE ERECTED.
The negotiations which have been in progress for several weeks for the sale of the lot belonging to the estate of the late Malcolm McNeill on Jackson Street, Pacific Avenue, and Clark Street, just opposite the Grand Pacific Hotel, have been completed, and the property passed into the hands of the Phenix Insurance Company of Brooklyn, N. Y. The price was $100,000 cash. Mr. E. C. Waller of this city noted for the corporation. A considerable part of the money has already already been paid, and by the 1st of December the payments will be finished. It is the purpose of the buyer to begin at once the erection of a nine-story office building, which will be without a superior in the city. The lot is at present covered with shanties, but a note has been posted that they will be removed and sold.

The lot is 215 feet on Jackson Street and fifty feet on Clark Street and Pacific Avenue. The price looks high at first sight, but it is to be remembered that the lot is a very peculiarly located, being within a few steps of the Board of Trade, and one of the leading hotels of the city, near the “wholesale quarter,” and within a block of one of the principal railroad stations. The shape of the lot, too, is such as to concentrate value, affording as it will, so good light to all parts of the building to be erected. Owing to these facts, prices that have been placed on other properties in this city are no criterion from which to judge of the value of this one. The two principal tests by which experts measure the value of real estate are income and sales in the vicinity. There has been no income on this property, for it has bot been used. The only property in that vicinity which has recently changed hands was an inside lot on Sherman Street, which sold at rate of $1,500 a front foot, but property thereabout is valued at $2,000 or more. The McNeill lot sold at the rate of $1,860 a front foot on Jackson Street, but it is only half the depth of the Sherman Street lots. If the frontage were reckoned on Clark Street or Pacific Avenue it would be $8,000 a front foot. But the fairest way is to reckon by actual area, which would make the price $37.25 a square foot. This is the highest ever paid for property in Chicago, but is a good deal below the rates at which real estate often sells in other cities. Corner lots in best parts of Boston sell at $60 to $80 a square foot and New York at $80 to $120. The McNeill lot was bought about twenty years ago for $2,003. 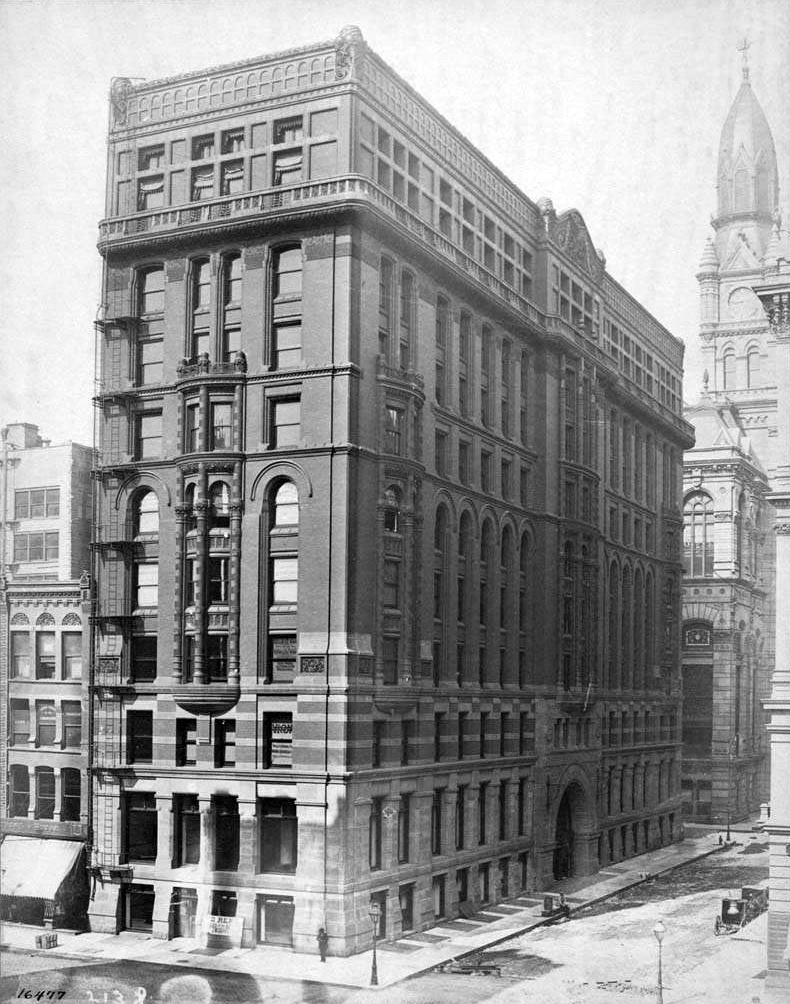 The building, the plans for which are now being prepared by Burnham & Root, will be none stories above a high basement, which will be about level with the sidewalk. The basement and first story will be of rough-hewn gray mica stone. The second story will be of brick, alternated with bands of the same stone. The stories above will be of a dark, reddish brown brick and terra cotta. On Jackson Street will be a centre pavilion, in which will be constructed the main doorway twenty-four feet wide, and two slightly projecting end pavilions near the corners of the building. On the centre pavilion there will be large octagonal bays from the top of the Pacific Avenue and Clark Street fronts. The tow curtains connecting these pavilions are treated more richer than the pavilions themselves, whose points of enrichment are the terra-cotta bays. The main cornice is at the top of the eighth story, which forms a whole balcony extending around the building and opening from the general offices of the company, which occupy the entire ninth story. Opposite the Jackson Street entrance there will be a group of four elevators, and behind them the staircases. The central space will be lighted from the south by court constructed of white brick. The central corridors lead east and west from this court. These, with the central halls, will be paved and wainscoted with marble. There will by this arrangement be a tier of deep offices fronting on the three streets and suites of shallow offices on the court to the south. 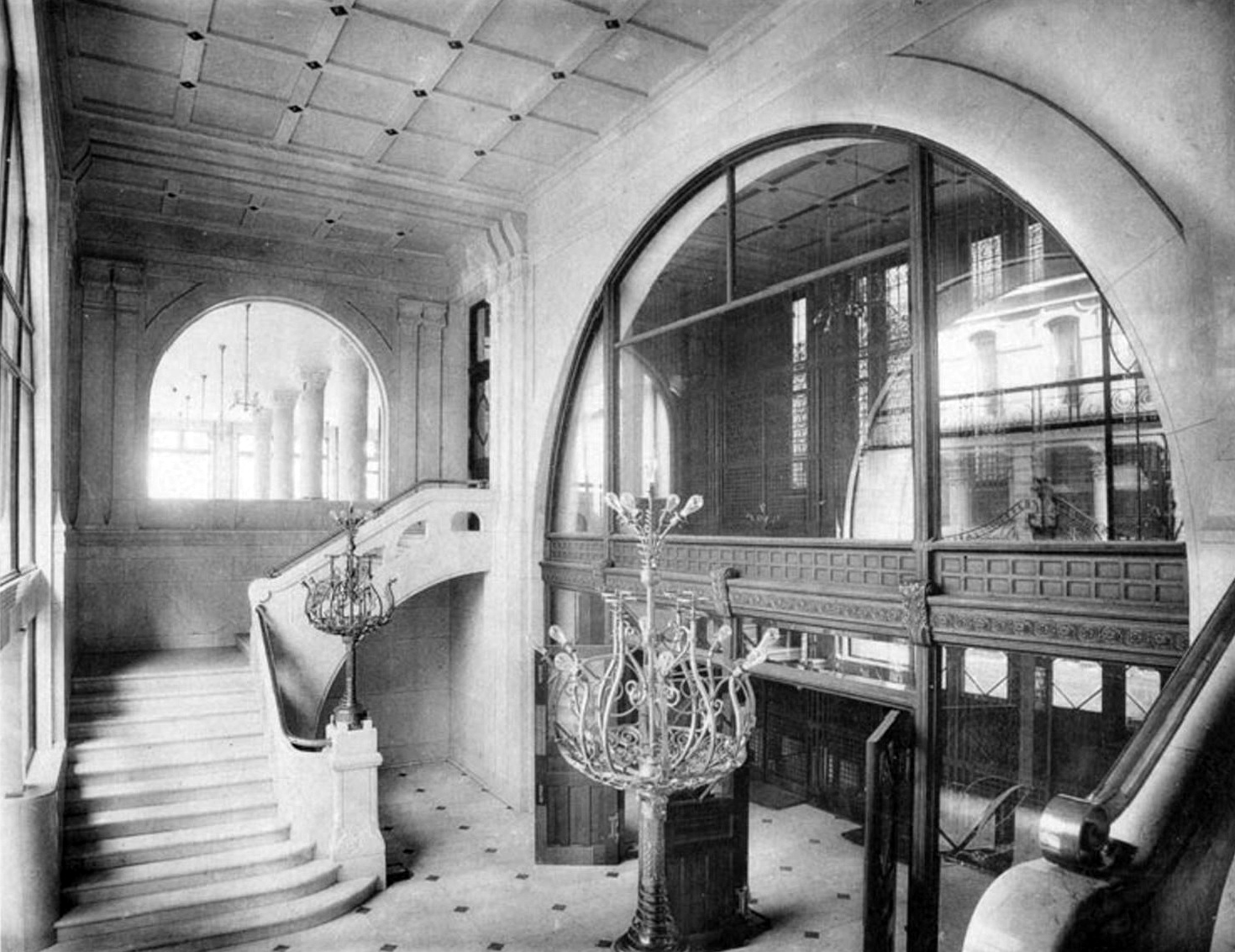 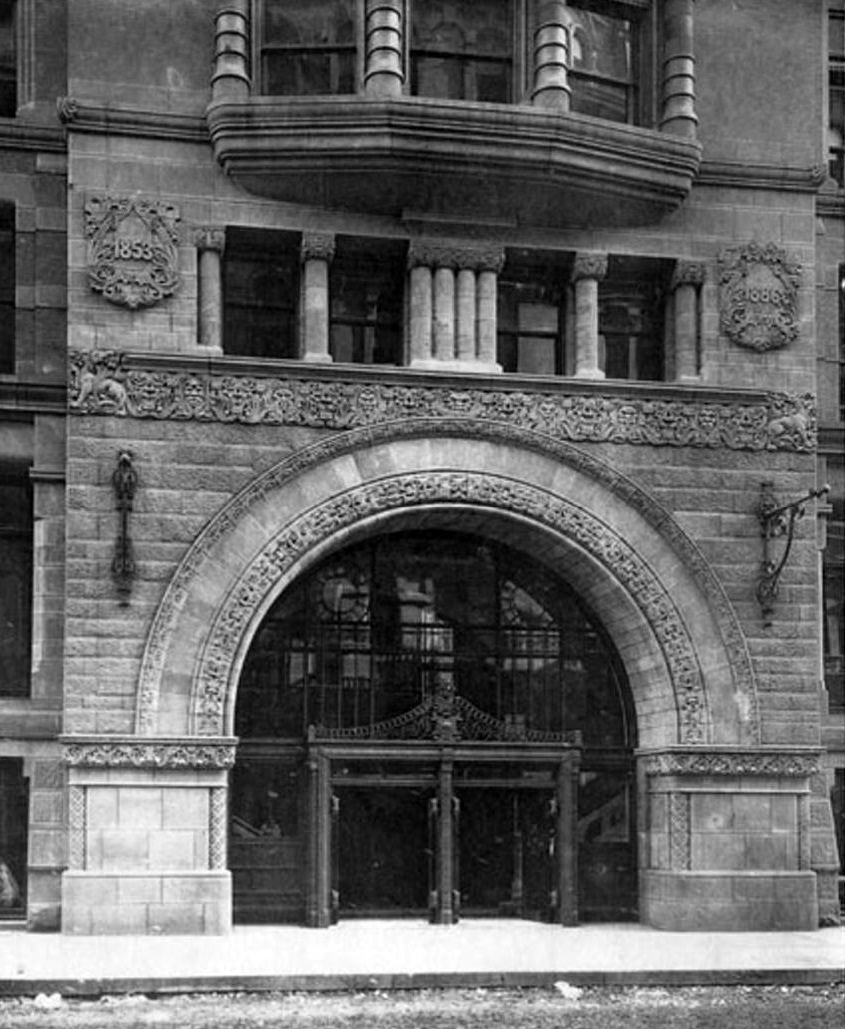 Phenix Building Entrance
“If beauty be its own excuse for being, this entrance needs no other, for assuredly it is one of the most beautiful and artistic works that American architecture ha.s to show.”—
Montgomery Schuyler, Harper’s Monthly, September, 1891

The plans as here outlines cover all the important points. There are yet some details to be provided for. The structure will be fireproof. Building and land together can hardly cost less than $1,000,000.

Thus this lot, which has been coveted by so many people since the Board of Trade moved to its present location, has been disposed of. There have been many schemes for its utilization, but from one cause and another they have fallen through. One of the obstacles has been the magnitude of the property and the fear that too many office buildings were going up. It has been intimated, too, that there was some difficulty in getting a clear title, but the title has been passed upon by four leading law firms in this city and pronounced perfect. The fact that the youngest of the McNeill children came of age the 31st of August made it possible to sell the lot under the terms of the will. All the legal questions were carefully sifted and settled, and the signatures of sixteen persons having possible equity in the property were placed on the papers, though some of them were asked for merely as a matter of extra caution. 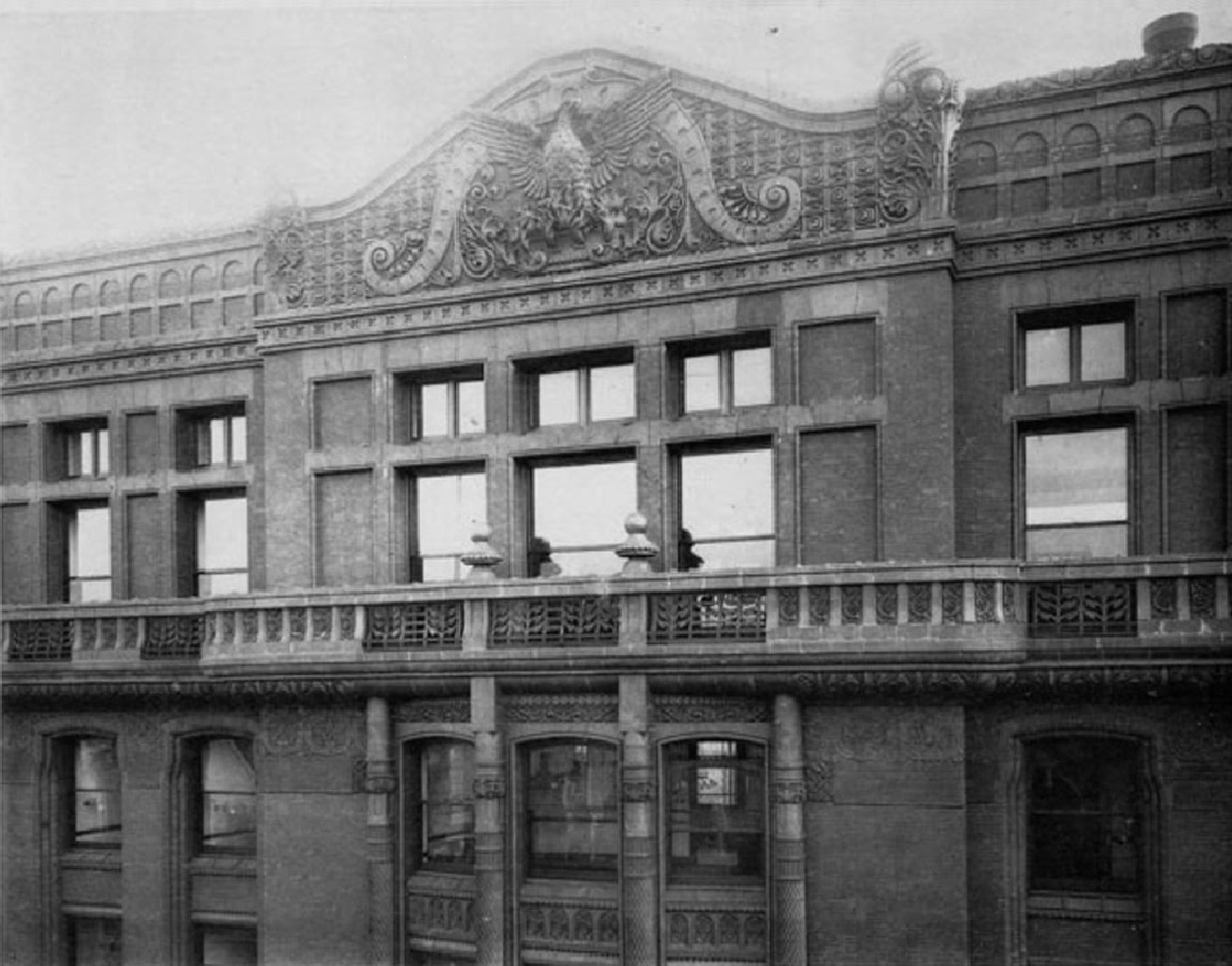 The Pnenix Building:
At the southwest corner of Clark and Jack son streets, has a depth of but 50 feet on Clark, with 217 feet of frontage on Jackson reaching to Pacific Avenue; 13 stories an( basement, 200 offices, 5 elevators, and 1,50 occupants. Built of steel, granite, marble terra cotta, and red pressed brick. AI offices have marble bases, all corridors are entirely of marble, with bronze railings High-class tenants have chosen these elegant precincts. The building was erected in 1886, at a cost of $700,000, and with the ground upon which it stands was sold to the Western Union Telegraph Company in 1892 for $1,500,000. The telegraph company added 2 stories to the height. 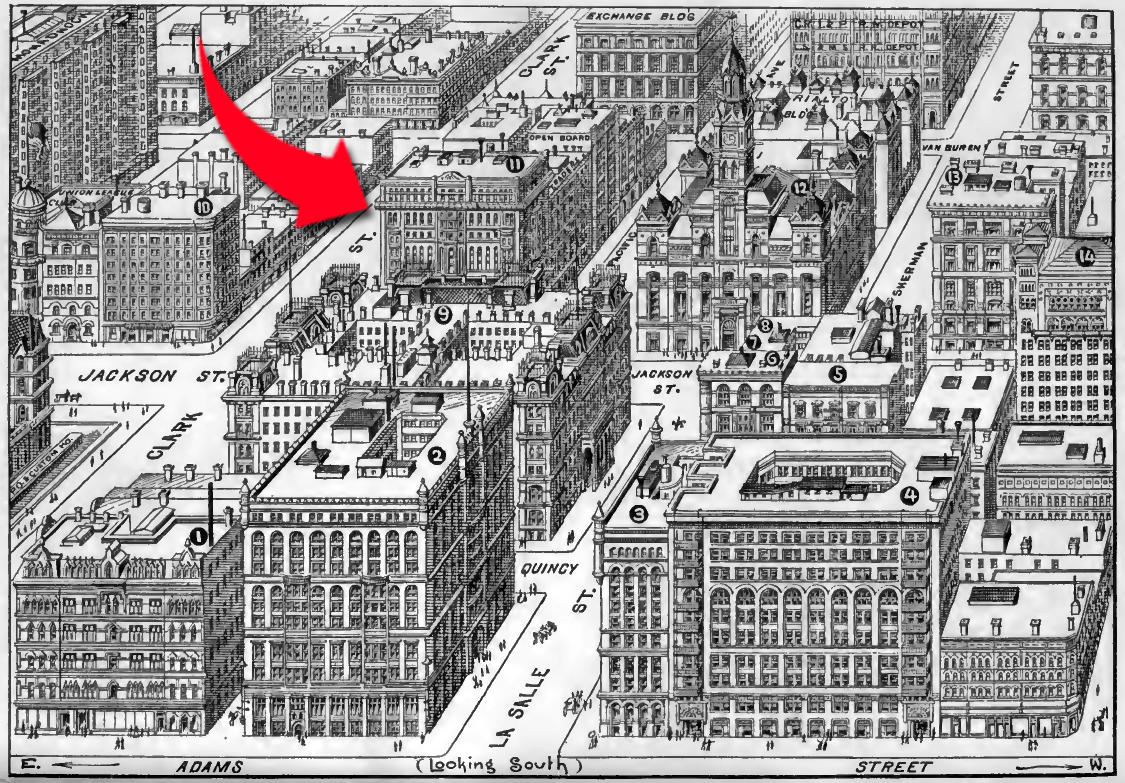 The building was sold to the Western Union Telegraph Company in 1892 for $1,500,000. The telegraph company added 2 stories to the height 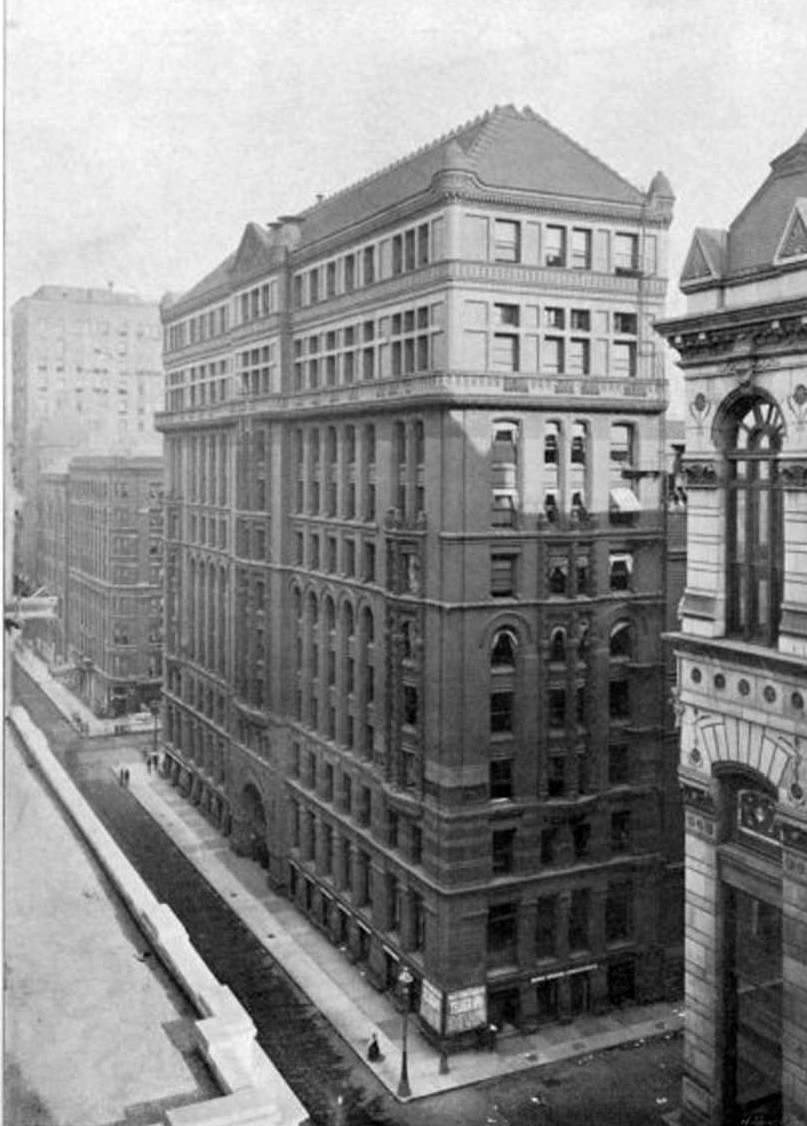 western Union sold the building to Frederick C. Austin in 1922. Austin donated it to Northwestern University in 1929 with the intention that the income derived from it would “provide scholarships for the training of business executives”. The building was demolished in 1957 and replaced by what today is known as the Transunion Building. 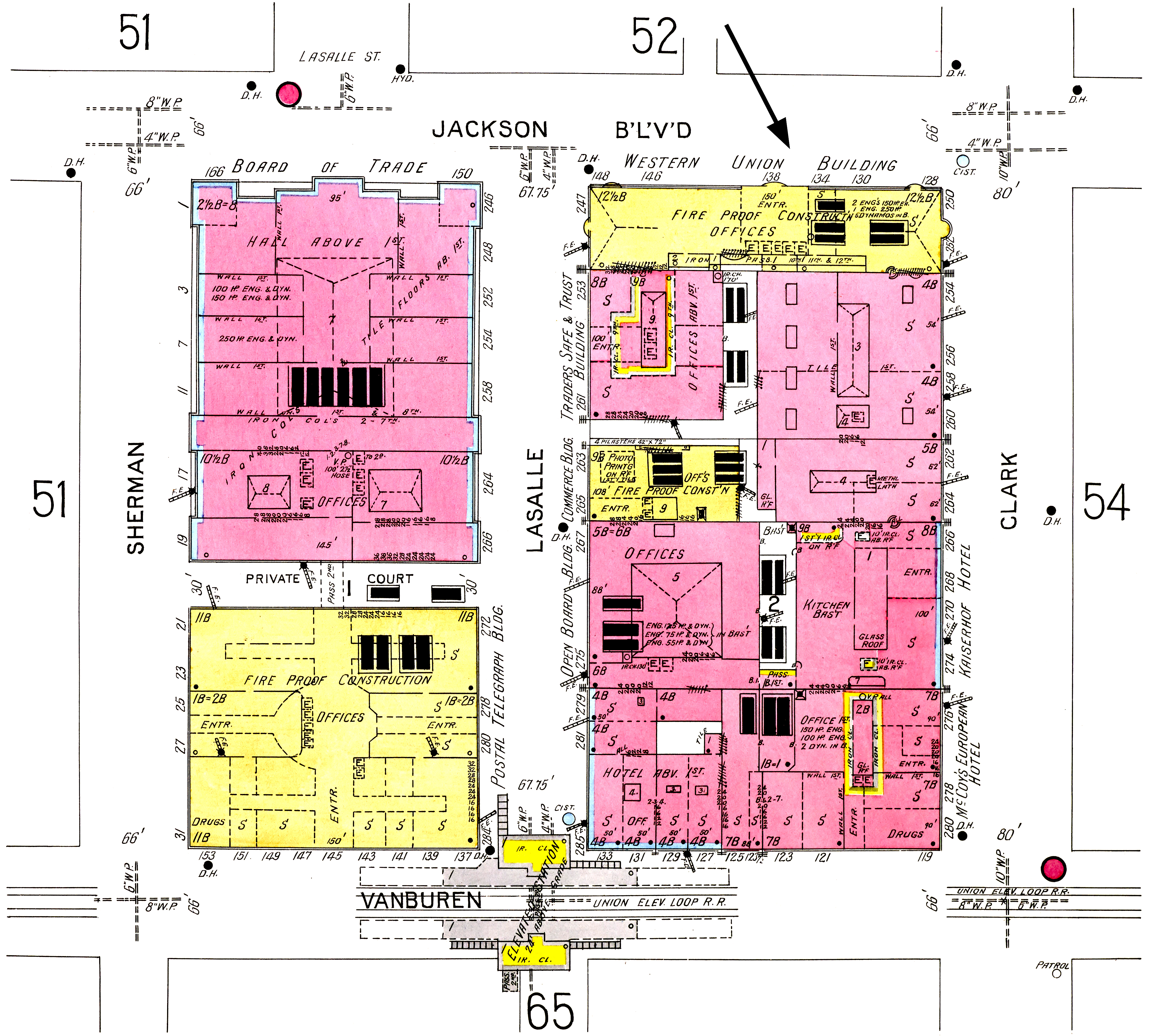