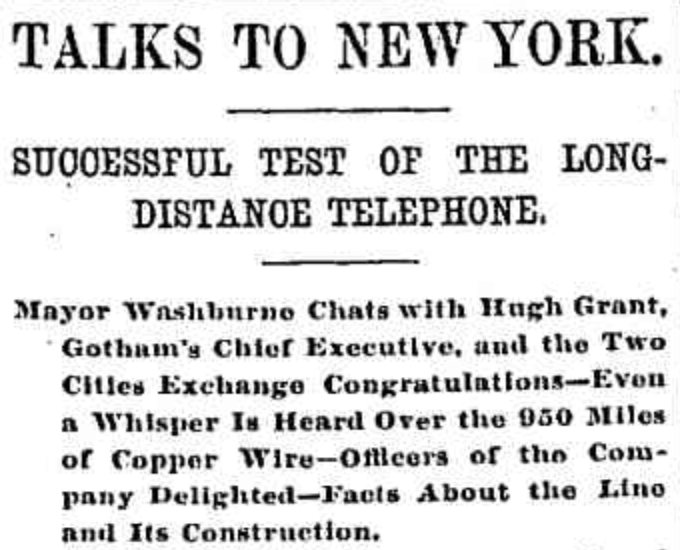 “The City of Chicago greets the City of New York.”

“The City of New York returns the compliment and wishes you all success in the you are to have this week.”

“The City of Chicago returns the greeting nnd congratulates the Nation on an American Invention which shall supplement the telegraph and enable the people of the continent to communicate orally where they now resort to the mail and the telegraph.”

Seated at a telephone in the American Telephone and Telegrapih Company’s office in Quincy street yesterday afternoon Mayor Washburne conducted Chicago’s end of the above conversation. At the. other end of the wire was Mayor Grant of New York. With this simple ceremony the long-distance telephone between Chicago and New York was formally placed in service.

Sixty persons were present to see it done. They were telephone men, merchants, and newspaper men. There were 150 people around Mayor Grant at the company’s office in Cortland street. New York, and the company so managed matters that everybody got a chance to test the workings of the line. They invited all to stand beneath two funnels fastened to the gas fixture and keep perfectly still. They did so and heard the “Star Spangled Banner” played by a cornetist in New York. Then the New York crowd gathered around similar funnels while Cornetist Cobb of Johnny Hand’s orchestra played the national anthem for them.

Heard “Annie Laurie.”
“We’ll do better than that for you” said F. J. Hovey of the companv, and he caused forty police telephones to be hitched onto the main wire. The guests pressed these little instruments to their ears and heard the New York cornetist play “Annie Laurie,” and afterwards Engineers Lyon and Pettinger carry on a long conversation about their dreams years ago that New York and Chicago would one day be connected by telephone.

William D. Hubbard and Prof. Alex Graham Bell then took the instruments. They called each other “Aleck” and “Bill,” and started in to talk about the day in 1876 at the Centetmial Exposition when they put in operation and talked over tihe first telephone, but they changed their subject and chatted about various things just the same as a conversation between people separated by 1,000 miles wasn’t worth special mention.

Other conversations followed. Engineer Lyon declaimed Tennyson’s “C’harge of the Light Brigade” loudly, then sunk his voice to a stage whisper and repeated the story of Mary s little lamb to please a young woman who listened at the Newv instrument.

The newspaper men exchanged greetings with the New-Yorkers.

The test was a perfect success, and the two great cities of the New World have added a new link to their interlaced ties. Not the slightest was experienced in hearing or transmitting.

Engineer Lyon spoke in rather a loud voice, but this he explained was a habit. Mayor Washburne and the others used an ordinary tone. The voices of the New-Yorkers sounded “small,” like those from a phonograph. but perfecetly clear. 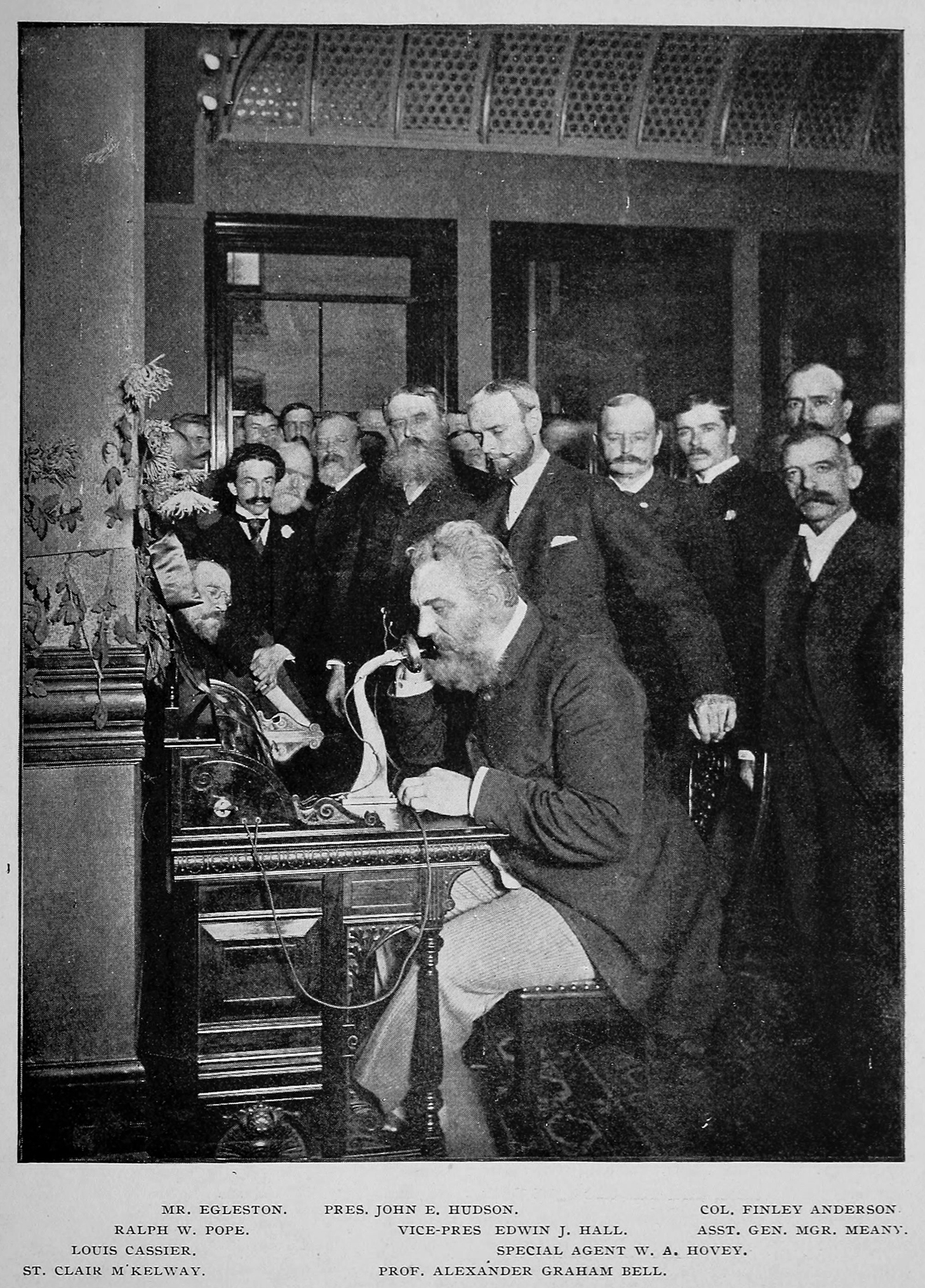 Facts About the LIne.
The telephone engineers and managers shook hands with their guests and distributed beautiful souvenirs to commemorate the event, consisting of a twisted wire with a miniature copper telephone at each end, one marked “Chicago” and the other “New York.”

The line is 950 miles in length and is said to be constructed in the most substantial manner. The poles are of cedar and chestnut, thirty-five feet and upward in length, and average about forty-five in number a mile, making thie total number of poles 42,750. The use of cables, which is extremely detrimental to long distance transmission, has been avoided to the utmost possible extent. The circuit used yesterday consists of two No. 8 hard drawn copper wires. This wire weighs 435 pounds to the mile, and the circuit contains 826,500 pounds of copper. A circuit of thle weight generally used for telephone service would weigh less than 200,000 pounds.

The points on the line are Newark, N. J., Harrisburg, and Pittsburg, Pa., Cleveland and Toledo, O., and South Bend, Ind. In the Eastern States connecting lines reach all important points from Portland, Me., in the East, to Buffalo, North, and Washington, South.

The tariff for five minutes talk with New York will be $9. The company’s officials are sanguine that they will do an excellent business.

The company does not expect to be in shape to handle business properly for two or three weeks.

MAYOR GRANT COULD NOT HEAR

The Long-Distance Telephone Trial from the New York End
New York, Oct. 18.—[Special]—Mayor Washburne at the Chicago end of the long-distance telephone, may have heard distinctly what Mayor Grant tried to say to him at the New York end of the wire this afternoon, but Mayor Grant was unable to hear a single word from Mayor Washburne. The test took place at the general offices of the company No. 18 Cortland street, and was somewhat of a failure. But while Mayor Grant could not hear Mayor Washburne, he did fairly well some of the telephone company’s employees later. It was explained that forty receivers had been put into the circuit and these were all being used by the crowd in the room. This, it was said, diminished the volume of sound. Eighty persons were present. A cornet solo played in Chicago was distinctly heard, as was also “The Charge of the Light Brigade,” spoken into the Chicago transmitter. Prof. Alexander Graham Bell also talked with William H. Hubbard through the wire.