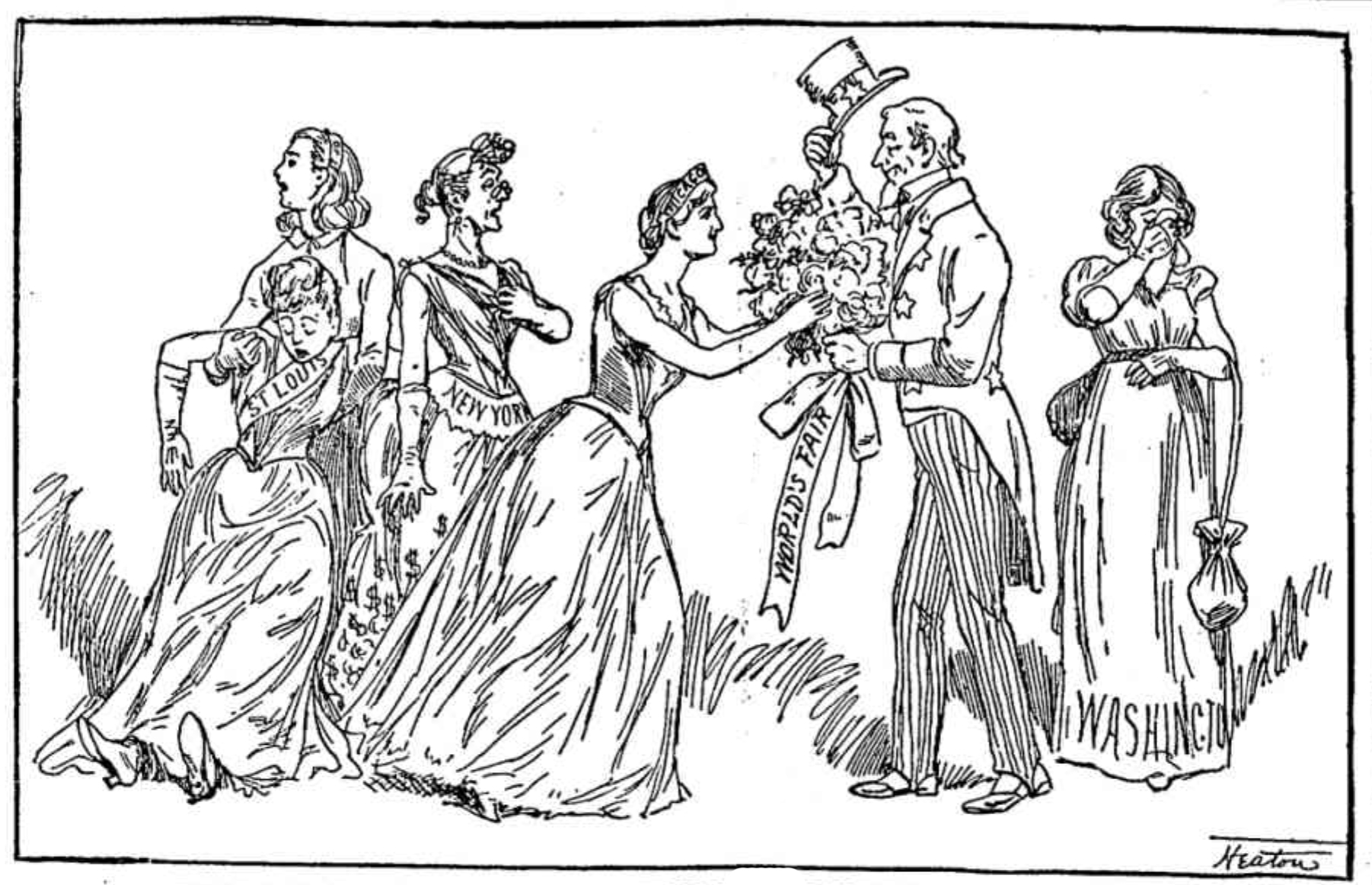 Uncle Sam awards the World’s Fair prize to the fairest of all his daughters.

Serious Ending of the Contest Before Congress—The Next Steps to Be Taken.
WASHINGTON, D. C., Feb. 24.—[Special.]—Great is Chicago. It gets the World’s Fair. A campaign extending over a month was ended today by brilliant tactics, forcing the field which had been against it in a fight to the finish. From the start the combination of New York, St. Louis, and Washington worked together against Chicago, but after a six hours’ battle the Lake City broke it to pieces.

The popular branch of Congress decides that Chicago is the most suitable place for holding the International Exposition to commemorate the quadri-centennial of Columbus’ discovery of America. This much has been done: the location is fixed. The next step is the general legislation. The bill which has been prepared by the select committee rccomm:tted ana Chicago will be recommitted and Chicago will be inserted in the place heretofore left blank designating the location. The bill will then come before tne House for discussion and amendment. It will pass in substantially its present form, It is true some croakers say the House will now kill the whole project, but they are all disappointed partisans of other cities The sentiment is so strong in favor of a Fair and Chicago won the location so fairly that no large proportion of the members can be gotten to deprive it of tha legitimate fruits of an honest victory. Probably two weeks will ba reoulred to get the measure through the House. It will then go to the Senate and be reported to the Select Committee, of which Senator Hiscock of New York Is Chairman. Neither this committee nor the Senate itself will undertake to run counter to the popular will, as shown by the vote in the House. If any material change is made by the Senate it will be a postponement from 1892 to 1893, but the friends of Chicago are not wrangling about this. They have got the Fair, and if they cannot get it in 1892 they will bo quite content if it shall be held over until 1893. This, however, is a matter for the future to determine. It may reasonably be predicted that within a month the President of the United States will have before him a bill For the World’s Fair to be held at Chicago. That is the general situation.

The victory today was a brilliant one. It shows how strong tho feeling is that tha greater United Stales which lies west of tho Alleghanies is looked upon as the proper place for the great National celebration. The Mississippi Valley is the seat of empire. Natural forces combined to make its leading city the choice for the celebration, and the organization which welded theso forces together was a perfect one. Without such organization the real strength of Chicago would not have bean developed and the Exposition would have drifted to New York. Washington and St. Louis were never in the fight. In the hour of victory Chicago can afford to be magnanimous and the less said of the tactics of these two cities the better. One powerful influence in bringing voles to Chicago was the heartiness of its people in asking for the Fair. No one doubted that Chicago wanted it. No one doubled that it would make the Exposition worthy of itself and worthy of tho Nation. There was a hearty Western feeling that everybody would be welcome in Chicago, There was absolute unanimity on the part of the Congressmen who supported its claims. No suspicion of politics divided their efforts. No recriminations were uttered among themselves, added to this the financial guarantee which Chicago offered was known to be genuine and honest. Everybody believed that its promises would be kept. With its rival, New York, there was nothing of this kind. The Empire City’s bid for the Fair was rolled about in the mire of partisan politics. The leading spokesmen couldn’t trust one another. Its own supporters did not believe in the genuineness of the $10,000,000 bill which was offered to Congress as a bribe. Above and behind ail was the universal tooling that a large proportion of New York, if not a majority, did not want the Fair; they looked upon it as an annoyance, which would seriously interfere with their personal comfort. Nevertheless the leaders, who did want the Fair, made a tremendous bid for it. Commercial jealousy was invoked against Chicago, but the calculations of the Chicago people were accurate. They knew what members were for Chicago, what ones were against it, and what ones were drifting to it. On the other hand, New-Yorkers relied upon creating a stampede, but such efforts were futile against the compact forces of Chicago.

Said Col. Davis Saturday evening; “Chicago has simply to hold her members and she has got the World’s Fair.” This was shown in the balloting today. There was not a miscalculation. Beginning with a good lead, this was gradually forced up u few votes at a time, but always forging ahead. When on the fourth ballot 134 votes wero cast for the Lake. City Chicago had put forward its positive aggressive strength; thenceforth the recruits were to come from the members who wore well disposed towards Chicago but had declined to commit themselves till tne city bad shown its claims to be good. And the recruits came as needed. Every move of the combination was promptly met. The opposition made its stupendous error when, after the sixth ballot, it iried to get a recess. This meant time in which to hatch a conspiracy to defeat Chicago at all odds. The sentiment of the House tor fair play showed itself, and when this motion was voted down with a whirl tho beginning of the end had come. Tho remaining two ballots simply showed how hard the anti-Chicago combine could die, and with the eighth ballot its last gasp was given, and the House by a good majority had pronounced in favor of Chicago as the place for locating the Fair.

Whereas satisfactory proof has been presented to me that provision has been made for adequate grounds and buildings for the uses of the World’s Columbian Exposition, and that a sum not less than $10,000,000, to be used and expended for the purposes of said exposition, has been provided in accordance with the conditions and requirements of section 10 of an act entitled “An act to provide for celebrating the four hundredth anniversary of the discovery of America by Christopher Columbus by holding an international exhibition of arts, industries, manufactures, and the products of the soil, mine, and sea, in the city of Chicago, in the State of Illinois,” approved April 25, 1890:

Now, therefore, I, Benjamin Harrison, President of the United States, by virtue of the authority vested in me by said act, do hereby declare and proclaim that such international exhibition will be opened on the 1st day of May, in the year 1893, in the city of Chicago, in the State of Illinois, and will not be closed before the last Thursday in October of the same year. And in the name of the Government and of the people of the United States I do hereby invite all the nations of the earth to take part in the commemoration of an event that is preeminent in human history and of lasting interest to mankind by appointing representatives thereto and sending such exhibits to the World’s Columbian Exposition as will most fitly and fully illustrate their resources, their industries, and their progress in civilization. 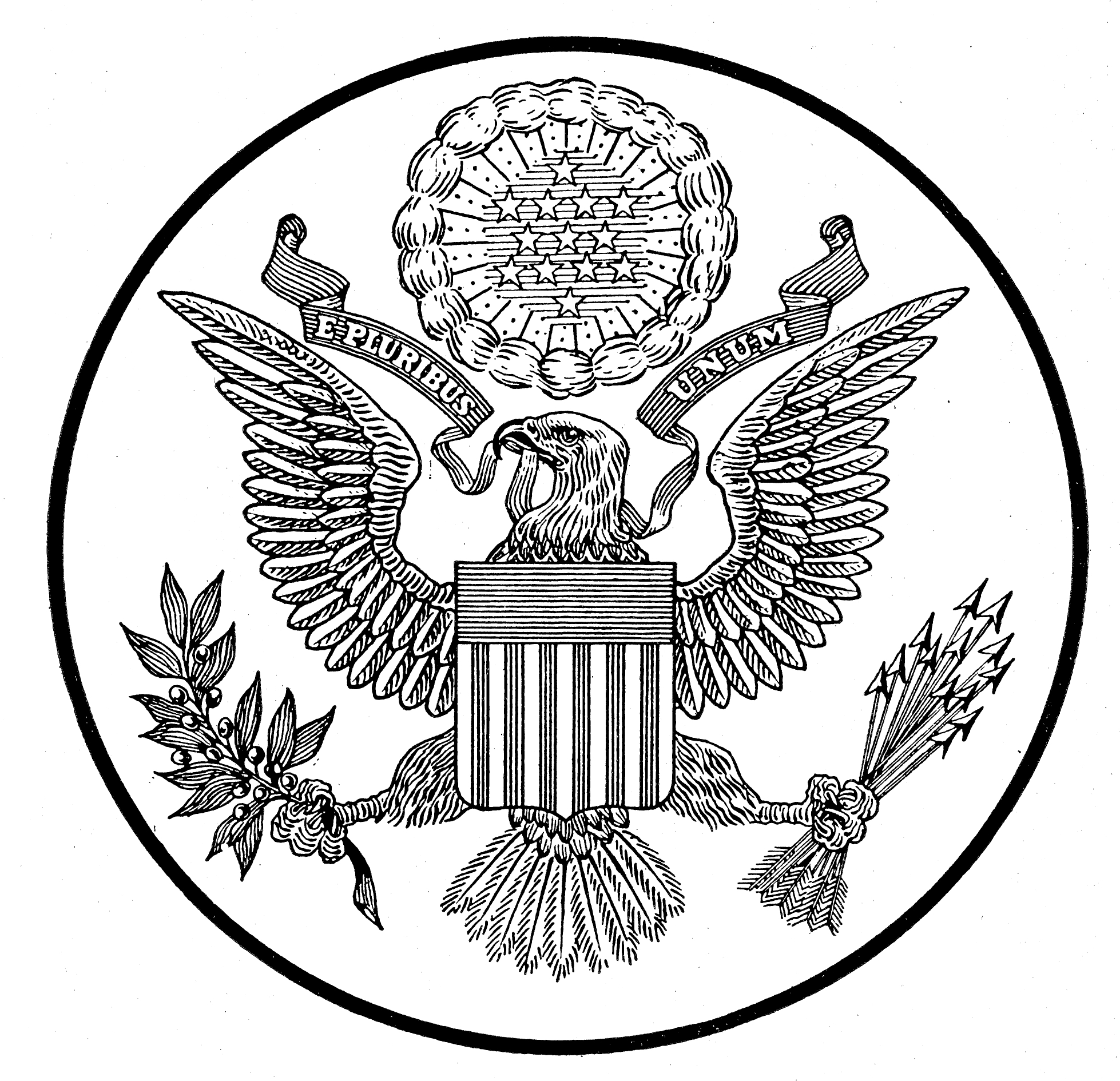 In testimony whereof I have hereunto set my hand and caused the seal of the United States to be affixed.

Done at the city of Washington, this 24th day of December, 1890, and of the Independence of the United States the one hundred and fifteenth.

By the President:
BENJ. HARRISON 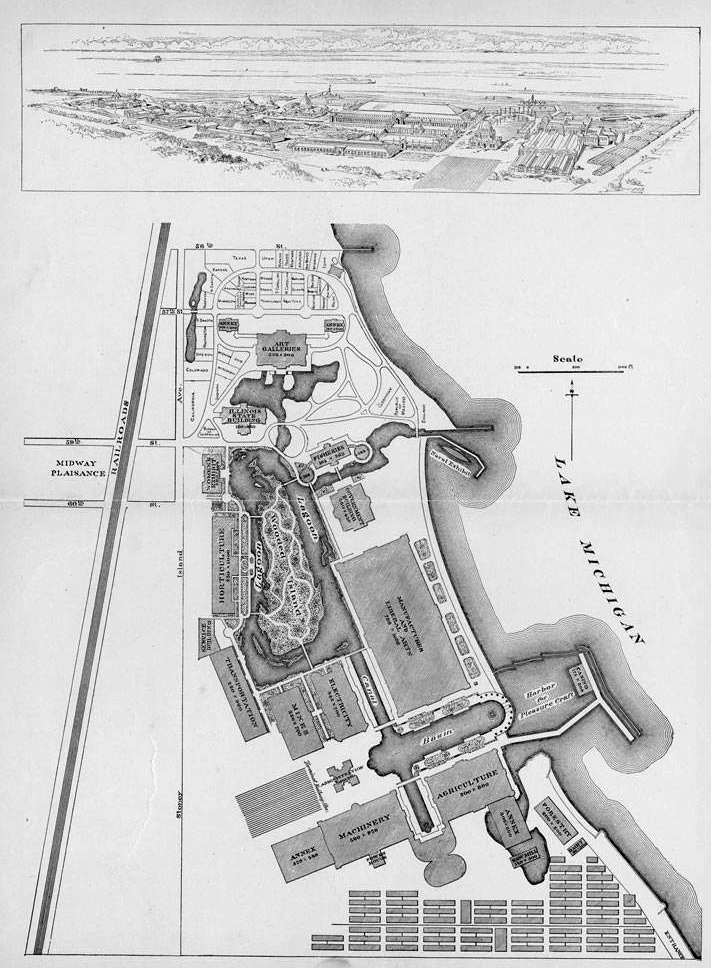