CHICAGO WAS INCORPORATED as a town in 1833. One of public acts by city fathers was to build a log cabin jail—a jail without a the first police force.

Constables did attempt to keep the peace among the Fort Dearborn soldiers and the handful of hearty villagers (28 votes were cast in the first election). But according to some stories, “tippling houses” almost outnumbered citizens.

March 4, 1837—the town became a city. At charter—election time, a High Constable was elected and provision made for the Common Council to appoint six constables—one for each of the city’s wards. The saloons probably provided these first permanent law enforcers with most of the work.

This same year, the words “traffic” and “problem” became officially synonymous—it was decided that the speed of vehicles and animals crossing a bridge needed regulation. By 1851, driving “immoderately” became a misdemeanor, and ten years later, officers were posted at the busiest intersections for the first time.

Finally, in 1855, came the first official police force. There was provision for 80-90 men under Chief Cyrus P. Bradley, and a continuous 24-hour patrol service was initiated.

1855 also marked the beginning of the Department’s territorial organization. Three precincts were established, each with a station house and a force of men. 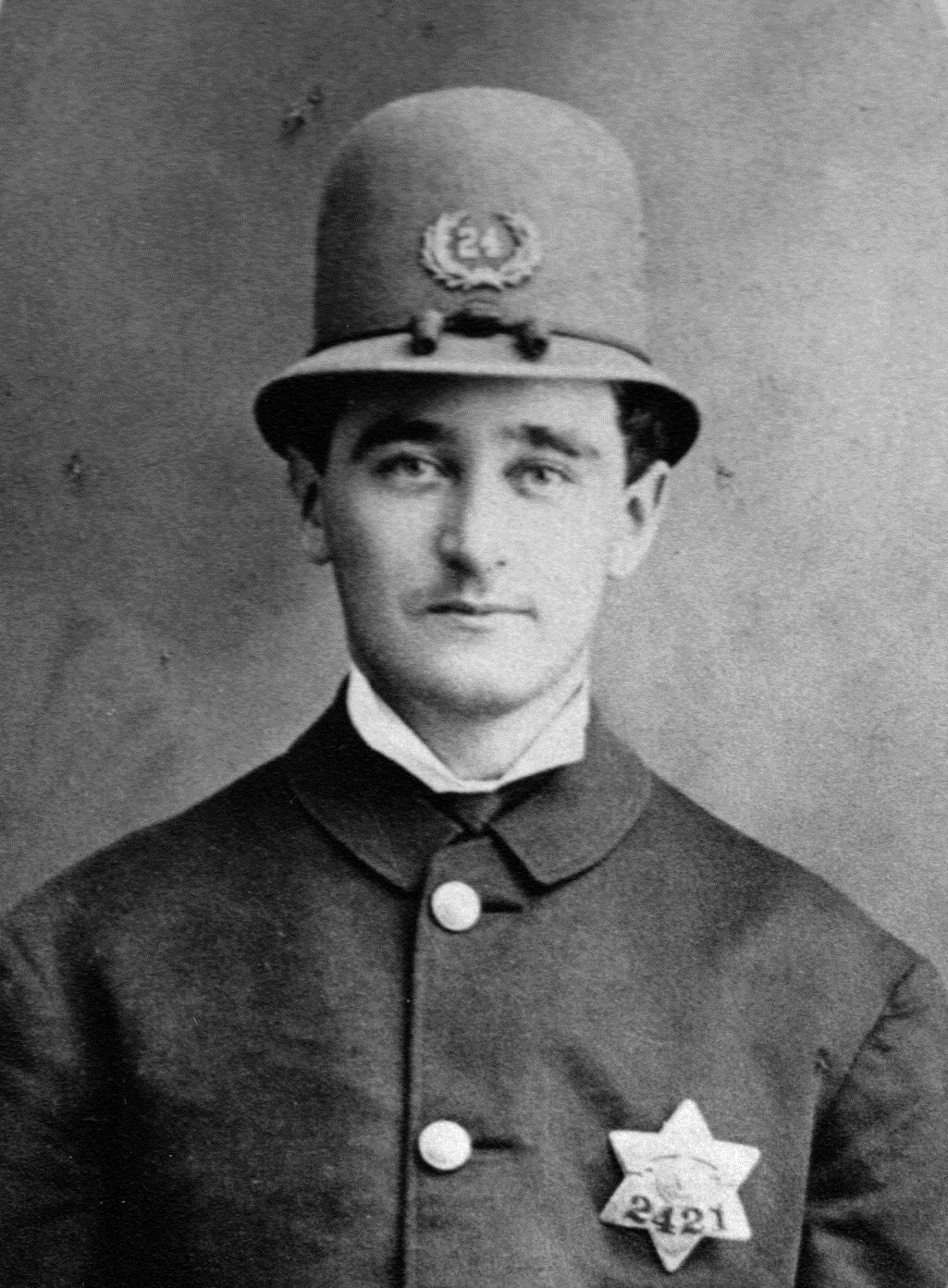 OFFICERS WERE WITHOUT uniforms in the beginning -their only distinguishing mark was a leather badge attached to their hat bands.

In 1858, the first uniform was adopted: a blue frock coat (nicknamed “copper”), blue navy cap with gold band, and a plain brass star. Officers carried heavy canes by day, batons by night, and used metal, “creakers” to call for help.

Then there were the heavy coat jackets which stayed buttoned up to the top all year ’round. A story has it that one hot summer day, a compassionate captain ordered his men to doff their coats. No one moved. He repeated the order. The men obeyed and were immediately sent home. Not one was wearing a regulation shirt. Most wore just an undershirt; some, no shirt at all.

A later variation of the uniforms resembled World War I army uniforms, with Sam Brown belts and leather puttees into which officers stuffed their tight-fitting breeches 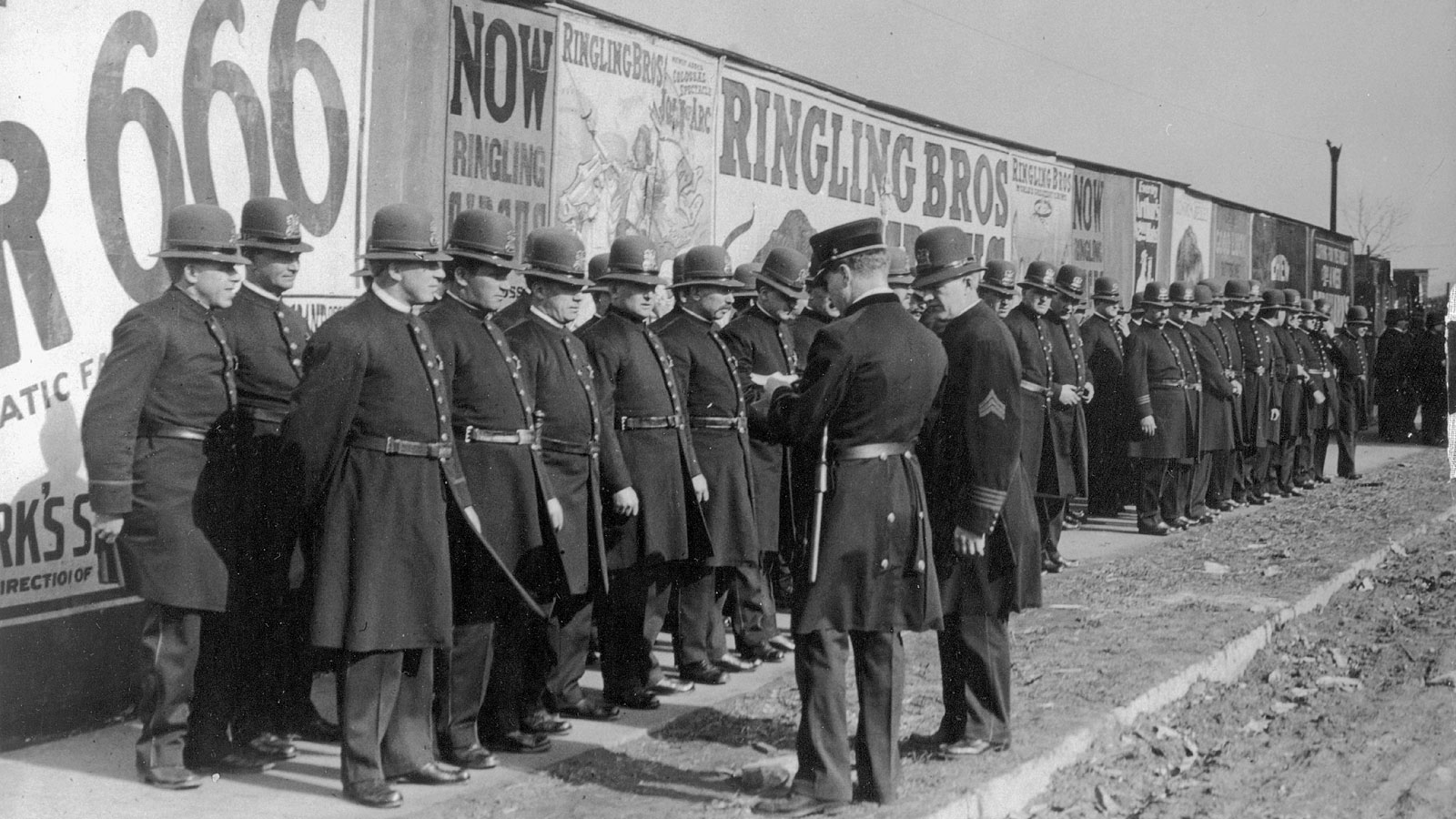 Roll call across from the Seventh Regiment Armory (at South Wentworth Avenue and 33rd Street) on April 15, 1912.

THE FIRST PATROL wagon, put into service in July, 1881 , was also designed as an ambulance for transporting prisoners. Seventeen patrol wagons, 40 horses and 12 barns were on the Department purchase order.

Prior to the wagon, officers had been using any and every description of conveyance -including wheelbarrowsto transport “intoxicated and unruly men” to the lock-up. But the new wagon had one big disadvantage: it was “open-air”, and policemen were often obliged to tie down drunks to keep them from falling out.

According to one story, the Chicago Police Department originated the patrol wagon and the name “paddy wagon.” One hot summer day in 1878, an officer was unsuccessfully trying to maneuver an intoxicated man to the station. Along came the owner of an express wagon and offered both a free ride. The officer’s name was Pat Claussen—hence “Paddy Wagon.” Later, when the “bottle victims became sufficiently numerous to call for more of his time, Claussen charged 50 cents a delivery.”1 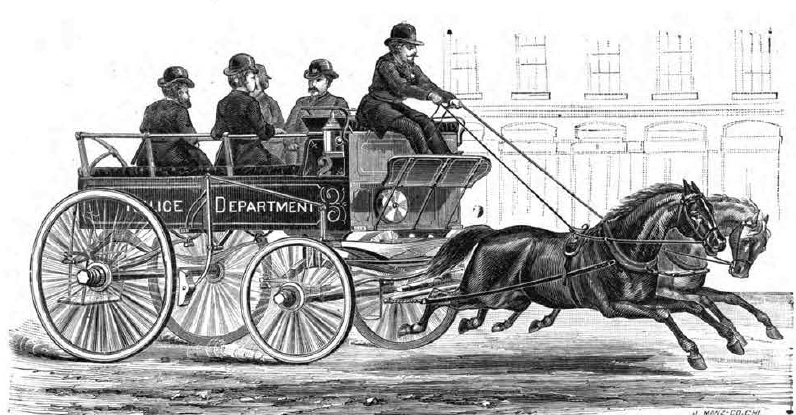 TRAGIC YEAR for the Chicago Police Department, 1886—the year of the Haymarket Square Riot. A bomb was thrown in the midst of police attempting to disperse a large crowd. The result: seven officers killed, 67 injured. A monument honoring those who died was later erected and stands at 700 West Randolph Street.

MOTORIZATION OF THE force began in 1908 with the purchase of “three autos of the finest construction.” By 1915, Department vehicles—all 50 of them—were motorized.

But the horse hadn’t passed from the scene. In 1906, a mounted force was detailed to “beats in those parts of the downtown district where congestion is greatest.” In 1948, the mounted police force was officially disbanded. 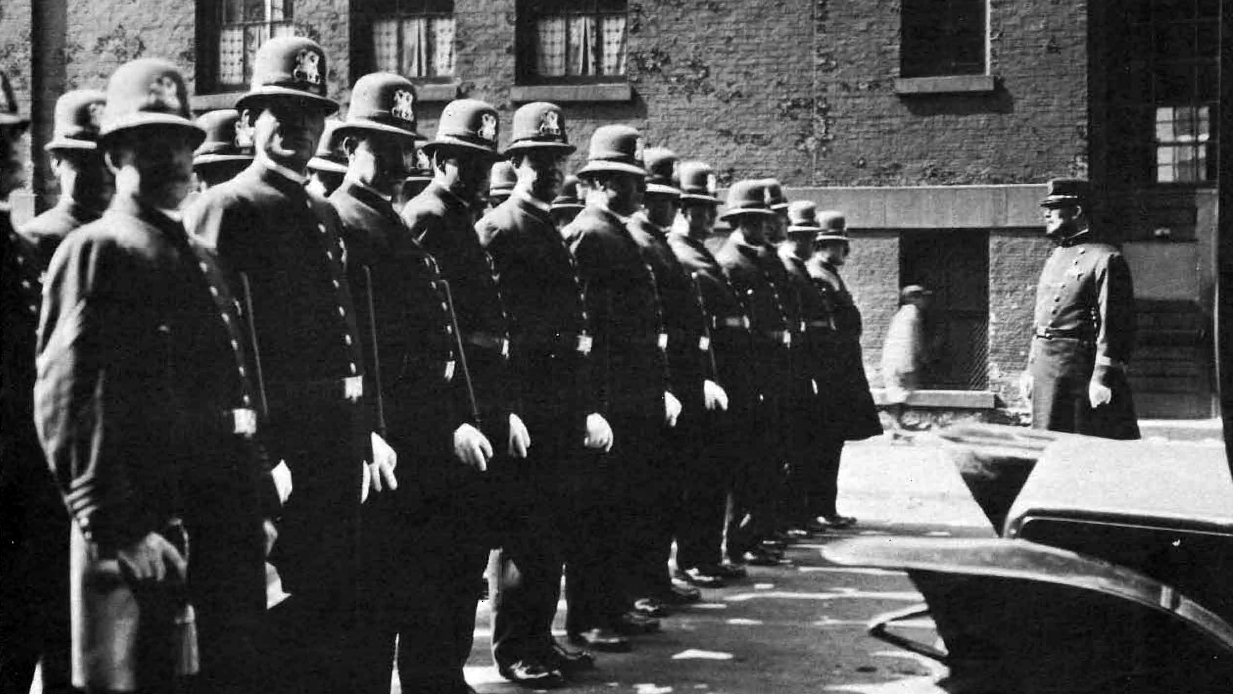 SIX DETECTIVES MADE up the the first Detective Division established in 1860. The Division expanded slowly over the next 20 years, but by 1890, 50 detectives were on the force.

THE PATROL SIGNAL Service alarm box appeared in 1881. Officers and “reputable citizens” were given keys to the booth containing a telephone connected directly to the station. Around 1915, booths were replaced by call boxes mounted on posts or pedestals.

A major breakthrough in communications was made in 1929 when the Department, in cooperation with the Chicago Tribune, experimented with one-way radio transmitters in five squad cars. The first broadcasts were made over Tribune-owned radio station WGN.

In 1930, the Department’s own radio broadcasting system was put into operation, and a centralized Complaint Room was set up in Police Headquarters.

And in 1932, police call procedures were modified switchboards for receiving calls were placed in six divisional headquarters instead of having calls monitored within all stations themselves.

By 1942, all district, bureau and accident-prevention squads were equipped with two-way radios. Then, in the mid 1950’s, the entire broadcast operation was reorganized in relation to other units. There were individual booths for telephone operators handling police calls from the public; and a moving belt facilitated contact between the operator and dispatcher. Not until 1960 were broadcast operations substantially overhauled with the installation of the modern Communications Center. 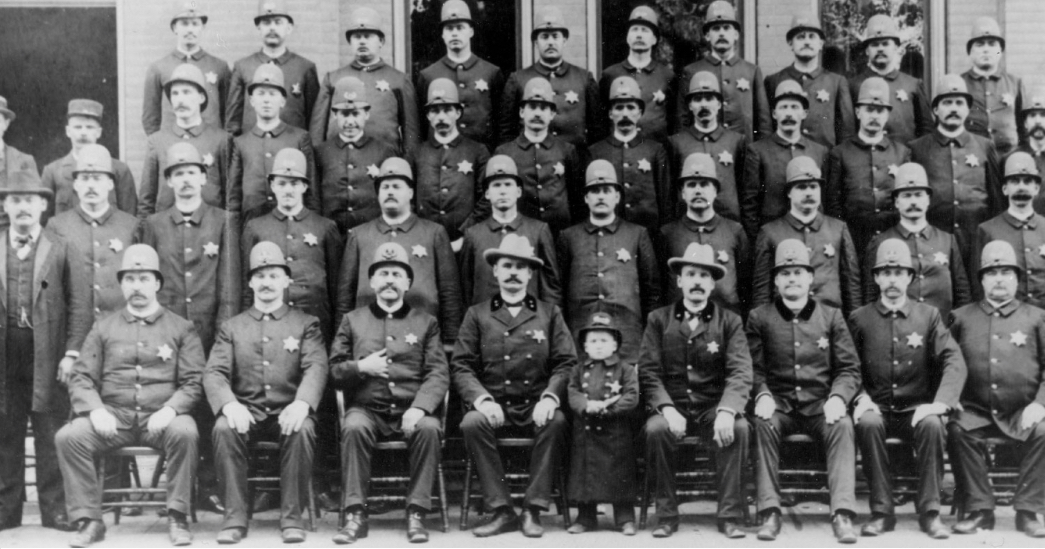 The Sheffield Avenue police squad in 1896.

SCIENTIFIC CRIMINAL investigation began in 1884 when Captain Michael Evans established the first Chicago Identification Bureau. A camera and notebook were all Evans needed for his “Rogue’s Gallery.” The Captain also initiated Department use of the Bertillon system -early method of identification by taking physical measurements of arrestees.

The Bertillon system was abandoned after Evans’ son took a trip to St. Louis. Seeing a demonstration of the revolutionary new fingerprinting technique, the son returned to Chicago full of enthusiasm. He succeeded in winning over his dubious father, and on 1 January 1905, the fingerprinting method was introduced. At first, Evans was ridiculed for the outlandish change. But ridicule soon turned to praise in 1910. A murderer was caught after he carelessly left fingerprints at the crime scene. The Illinois Supreme Court upheld the use of fingerprints as evidence, and the suspect was convicted.

Apart from adding one detective to study documents and laundry marks, the crime detection facilities changed little during the next 30 years. Then in 1938, the Department purchased the Scientific Crime Detection Laboratory from Northwestern University for $25,000 -“certainly a bargain,” as Chief James P. Allman remarked at the time.

Many original lab members remained, including Professor Fred Inbau, Lab Director. Professor Inbau now teaches at the Northwestern University School of Law. The location of the lab was moved from 222 East Superior Street to Headquarters in 1941.

After the move, the lab’s facilities included two chemical labs; a photo room and darkroom; a machine shop; a ballistics room; a mocroscopy lab; a library; a documents examiner’s room; a special chamber outfitted for lie detector tests; and an exhibits room with a complete array of historical crime implements.

On October 12, 1921, there were no crimes recorded in the City of Chicago.

1Origins of the phrase are not sinister. The origin is from the era of horse drawn box enclosed wagons employed by the Police Department (P.D.), especially of New York City. These wagons had the sole identification painted on the sides, in large letters the initials P.D. When spoken the term “P.D. Wagon” easily becomes “paddy wagon”.