Finger Prints on Window Sill Reveal Him to Be Thomas Jennings, Recently at Joliet.

The true identity of the negro arrested yesterday for the killing of Clarence D. Hiller, 1839 West One Hundred and Fourth street, chief clerk for the Chicago, Rock Island & Pacific Railroad, was discovered last night by Captain William F. Evans, finger print operator in the Bertillon identification bureau at the Harrison Street Police Station.

The negro, who gave the name of William Jones, is really Thomas Jennings, an ex-convict from the Joliet penitentiary, who was paroled August 3. He was identified by means of finger prints he left on a window sill at the Hiller home. This is the first time since the installation of the Bertillon identification system in Chicago that a criminal has been identified by this method. Jennings was positively identified as the murderer yesterday by Clarice Hiller, daughter of the slain man.” The discovery of the finger prints was made by Captain Evans. The negro gained an entrance by running a wheel barrow under a window at the side of the house on which he stood while prying the window open with a jimmy.

Finger Prints Compared.
Finger marks were left on the window, but were so smeared they could not be used. Others were found on the sill, a portion of which was cut away. This piece of wood was taken to the station, where a powder was sprinkled on the prints to make them more clear.

On comparison with prints already in the department and with those of the suspect it was discovered they were all the same, according to Captain Evans. Further investigation will be made this morning, to make identification even more complete, when photographs of the intensified prints on the wood will be made.

The murder of Hiller is one of the most daring crimes in recent years, and the residents of South Englewood are aroused to a high pitch of excitment over the series of recent burglaries in that section, which culminated in the tragedy.

Girls’ Cries Arouse Father.
The marauder, once in the house, went immediately to the bedroom of the two oldest ot the four children, Clarice, fifteen. and Florence, twelve, who awakened. Both screamed aroused their father, who, after awaking his wife, secured a revolver and rushed to the scene. He ran into the negro, who was just, emerging from the room. They clinched, and a desperate struggle followed.

Mother and children stood by. screaming frantically. The burglar managed to break away and started to run down the stair but was caught by Hiller.

A moment later three shots were fired in rapid succession and Hiller fell over lifeless, the murderer escaping through the open window. The wife rushed out of the house and notified neighbors, who notified the police. Four detectives scoured the neighborhood and discovered the negro, who gave the name of Jones.

Jennings Has Long Record.
A message from the chief of police at Harvey, Ill., last night aided in the identity of Jennings, alias Jones. He has a long police record. He was sentenced to Joliet for burglary March 8, 1909, and not released until last August. Police Lieutenant Atkinson said last night Jennings was beginning to lose his self-confidence. A complete confession is looked for.

The Hiller inquest, held yesterday at the Lacore undertaking rooms, 1110 Morgan Park, was marked by dramatic incidents. During the examination of Jennings Clarice Hiller, bursting into tears, raised her hand and said:

I’ll avenge my father’s death if it takes me all my life.

The inquest was continued until September 27. pending further investigation.

“The public has my assurance that the negro who is alleged to have killed Mr. Hiller will have a speedy trial.” said State’s Attorney Wayman. “The case will come to a hearing next week if I can
possibly push it forward that fast. I will see that justice Is meted out.”

It was remarked that Hiller’s death had a curious similarity to that of Ira G. Rawn, late Monon head, who, it has been claimed, was killed by a burglar at his home i Winnetka two months ago. 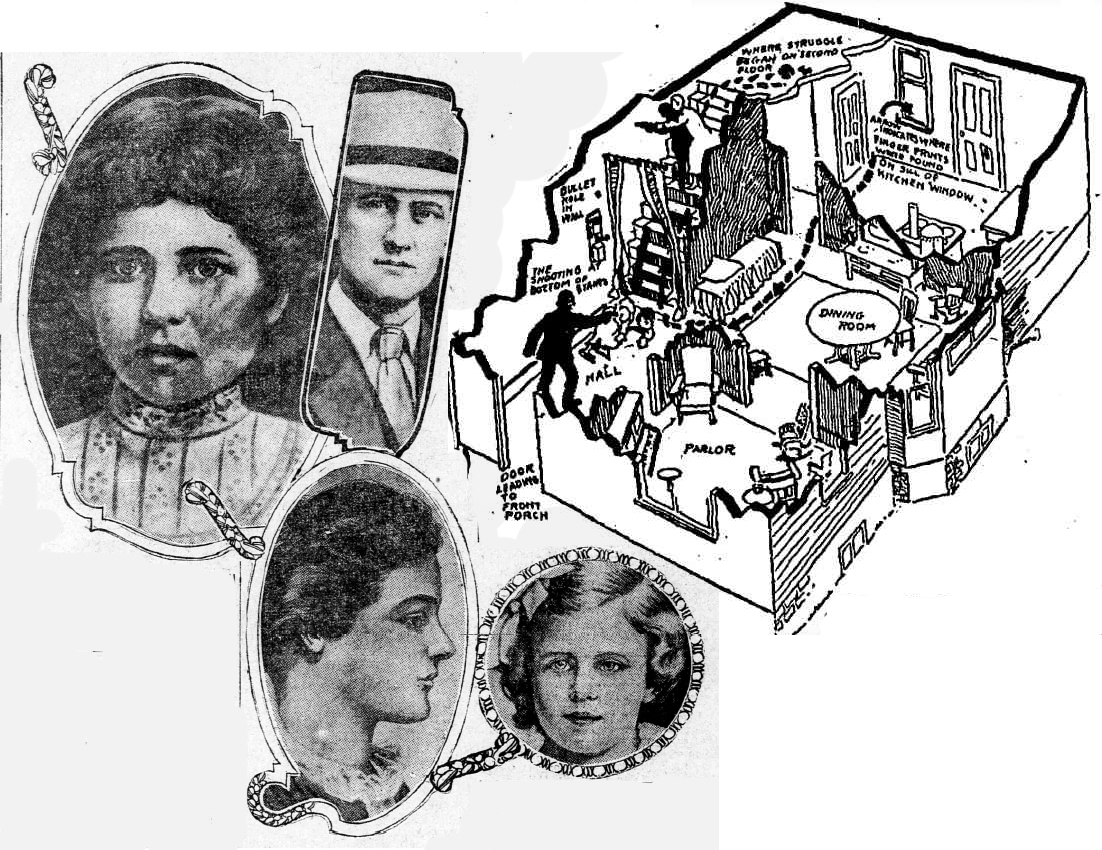 When Thomas Jennings, a paroled convict on burglary bent, left tbe marks of his fingers on the freshly painted porch of the Hiller residence in Washington Heights early on tbe morning of September 19. unknowingly be wrote his own death sentence as plainly as if he had signed that sentence in his own handwriting.

For Thomas Jennings yesterday was convicted by a jury in Judge Kavanagh’s court of the killing of Clarence Hiller, the man who heard the intruder in his home, who grappled with him and who fell mortally wounded by a bullet from the burglar’s revolver, and it was the marks of the fingers in the paint that sealed Jennings’ doom.

Sentence of death was passed on Jennings by the jury. He will hang in the County
Jail unless the Supreme Court reverses the decision.

First Case of the Kind.
The conviction of Jennings is the first recorded in the annals of crimes due almost solely to finger print evidence.

The case is remarkable In many ways. Save for tlie finger prints all other evidence against him was purely circumstantial. The evidence of the three finger prints, as they showed on the the porch of the Hiller residence, was conclusive, undeniable and damning.

It is a settled scientific fact that the impressions of the fingers of no two men in the world are exactly alike. Points of difference show with startling plainness under a microscope. In the Bureau of Identification of the Chicago Police Department it has long been an established custom to make impressions of tbe fingers of convicted criminals. The impressions of Jennings’ fingers were there.

On the morning Hiller met death Captain Michael E. Evans, chief of the bureau of identification, and his son, Willam M. Evans, went to Washington Heights. They were looking for finger prints. They found one on a window sill. It was so badly smudged as to be useless.

Find Prints in Paint.
Then they discovered the marks of three fingers— the index, middle and ring fingers of a left hand— in the fresh paint. The porch rail, with the telltale marks, was sawed off and taken to police headquarters.

Jennings was arrested on suspicion. The marks of his fingers were compared with the marks on the porch rail.

The result was startling. Thirty-three points of similarity were found by the experts, Captain Evans, his son and Mrs. M. E. Holland, the latter also connected with the bureau of identification.

The evidence of the finger prints, silent yet convincing, was laid before the jury. It sealed Jennings’ doom then and there.

“The finger prints and tbe finger prints alone convinced us that Jennings was the slayer of Hiller,” said one juror after another after the verdict hadbeen announced. The case will go to the Supreme Court on appeal.

Clarence Hiller, the slain man, was chief clerk in the local freight department of the Chicago, Rock Island & Pacific Bailroad. He lived with is family at 1837 One Hundred and Fourth street, Washington
Heights.

Scenes never before witnessed in Illinois attended and followed the hanging yesterday of the four Guelzow slayers and Thomas Jennings, slayer of Clarence Hiller. Special police precautions were necessary at the jail from early morning until after the removal of the bodies.

Never before in this state had it become the duty of state officers to administer capital punishment to so many prisoners on one occasion aud in one place. Never before had there been efforts so determined to prevent the accomplishment or the death penalty— efforts which were still proceeding in a court not far from the gallows at the moment the first of the condemned men died.

The men who beat to death a young truck farmer on a lonely road near Bowmanville were the first to die. Hope was still alive in the breast of the negro, Jennings, even after the execution of the Guelzow slayers—but hope vanished when the announcement came at noon that Judge Landis would not interfere with his execution. Jennings, the last to be hanged, died at 12:23 p. m.

Prisoners Give a Shout.
Just at noon Deputy Marshal Joseph Buckner brought a note signed by Judge Landis, saying that he would not interfere with the execution in the case of Jennings, and the final death march was begun.

Victim’s Friend Is Present.
Jennings, the negro, had been waiting stolidly, unable to realize the approach of his own death so long as his petition for a habeas corpus had been undecided. When he was told that his last hope was gone a look of terror came into his face for the first time, and a dog in the scaffold room, a pet of one of the guards, howled dismally. Jennings had to be almost carried to the scaffold. The trap was dropped for his death at 12:14.

Only one private citizen witnessed the executions. That was John H. Madigan of Washington Heights, a friend of Clarence Hiller, victim of the negro. It was Madigan who found the finger prints of the negro on the window sill in the Hiller home. The finger prints constituted the most important evidence in the conviction.

Jennings, the negro, was convicted of killing Hiller, chief clerk of the freight department of the Rock Island Railroad. He also attempted to attack Mr. Hiller’s daughter. It was her screams that woke Mr. Hiller.