Chicago is the hub of the automobile industry’s universe this week. The greatest exposition ever witnessed in this country of the triumph of men who had faith in the ultimate success of the self-propelled vehicle was opened to the public yesterday and gave visible proof that the fad and fancy of a decade ago is now upon a firm and substantial basis and with a future in the business life of the world as fixed, and permanent as that of the railroads, traction lines and other inventions
of the age.

The Chicago Automobile Show, which represents an investment of $187,000,000 and the employment of 108,000 skilled, workmen, requires two immense buildings—the Coliseum and the First Regiment Armory— to care for the exhibitors, and is the only one of the year which is open to all makers of the motor car, and the only restriction was want of space to accommodate applicants who arrived late.

It will be the third, last and most important of the national automobile expositions of the year and will mark the time between the manufacture and the actual sale of the product of 1909. With the ending of the show next Saturday night 21.500 salesmen and men employed in the garages throughout the country will begin the final campaign of seeking purchasers for their product and demonstrating the same.

Industry Keeps Growing.
These figures represent the number of men and amount of money directly connected with the industry. They also represent the amount of confidence the makers have in the motor car as an indispensable accessory to any business. This supreme confidence which might have been sorely taxed during the financial distress of the greater part of last year, is about to receive its reward, if the signs of the times are not deceiving, for there is greater interest being taken in the motor vehicle now than ever before, and the heydey of the venture is so far in the future that it cannot be foretold.

The only positive thing now known is that the industry is growing and will continue to grow till it is spread throughout the entire country, and what is now looked upon as an infant in the business life of the land is destined to become oue of the important elements in the worlds rehabilitation, ranking with the steam ears, the telegraph, telephone and electricity.

The story of the growth of the automobile business reads like a fairy tale. Ten years ago the motor car was an engineering fad, a plaything for the wealthy for monetary diversion or the parading of riches. The business had developed to the extent that the cars would run, but further than that they lacked the essentials of reliability, comfort and general usefulness.

Pioneers Saw Needs.
But the pioneers in the business knew there was something to it. and active competition resulted in improvements and progress along engineering lines and perfection of mechanical parts and materials till the people were forced to acknowledge the motor-driven vehicle as a necessity commensurate with the times.

The panicky period, which the weakhearted knew would doom the industry, only served to strengthen it, for new ideas were infused into the business, and the result is the car of moderate price. Upon that point the future of the business depended, and eventually it had to come, but the financial flurry forced the issue and brought it about a couple of years ahead of time. The advent of the medium and low priced car removed the fad and with the improvements made in construction the automobile began to turn from a purely pleasure vehicle to a business and commercial proposition with advantageous results.

The makers have been looking forward to the popular priced car for years, but had it not been the call of necessity and the question of weathering the storm of money stringency, the delay might have been several years. But the low-priced ear, which has all of the advantages of the more pretentious affair in the ordinary life of the business man. has created a demand for the 1909 product which is estimated around the 75,000 mark. 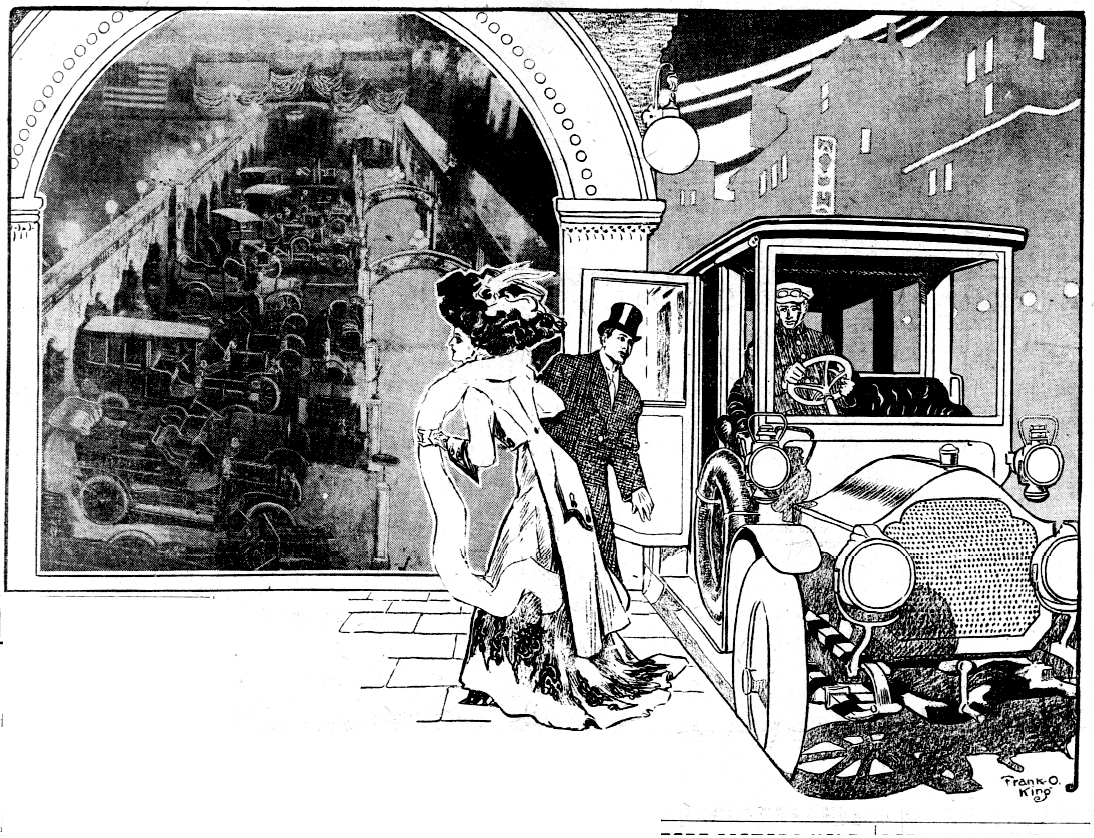 $75,000,000 in Output.
This does not mean that the high-priced machine will not be sold or suffer by the new move. On the contrary, the makers of the more expensive cars are planning to sell more of their output than ever, which means, if their hopes are realized, that the sale of American cars alone, at the most conservative estimate, will amount to $73,000,000. taking $1,000 as the average price.

The United .States lead the world in the manufacture of the motor vehicle. Its factories will turn out almost as many cars as France, whose output will be 40,000, Italy 25,000, and England and Germany 20,000 combined. Thirty American manufacturers have produced cars which are sold all over the world, which in competition with the products of France, Italy, Belgium. England and Germany shows the makers in this country can more than hold their own.

In the last twelve months, notwithstanding the depression in general trade, 32,000 cars wore sold In the United States and in the last eight years the people of this country have purchased 175,000. It is estimated thai 150,000 of this number arc still in existence and being used daily.

Will be held under the auspices of the National Association of Automobile Manufacturers.
At the Coliseum and First^ Regiment Armory.
The week of February 6 to 13, inclusive, with the exception of Sunday.
Show will be open daily from 10 oclock in the morning till 11 o’clock at night.
The members of the American Motor Car Manufacturers’ Association and the Association of Licensed Automobile Manufacturers have combined for this show.
Two hundred and seventy-eight exhibitors occupying 323 spaces and displays.
Ninety-two exhibits of leading American cars.
Six commercial car exhibits.
Two exhibits of foreign cars.
Twenty-one exhibits of motorcycles.
Oue hundred and fifty-seven exhibits of motor and accessory manufacturers.
Only national show to be held in America.
Fifty thousand dollars expended for decorations.
Headquarters of the National Retail Automobile Dealers’ Association.
Expected attendance, 200,000.
Expected attendance of automobile dealers, 5,000.
Value of exhibits, $2,000,000.
Number of square feet exhibition space, 55.000.
Lowest priced car. $250.
Highest priced car, $10,000.
Fastest cars— Locomobile and Fiat racers, 100 miles an hour.
Grand Prize cup, Vanderbilt cup and Founder’s Week cup on exhibition,
Record attendance expected on Society Night, Wednesday, February 10.
Decorative scheme— Prevailing color, bronze. Papier mache, staff work, statuary, potted plants and incandescent and arc electric lights.
Show under the management of Samuel A. Miles 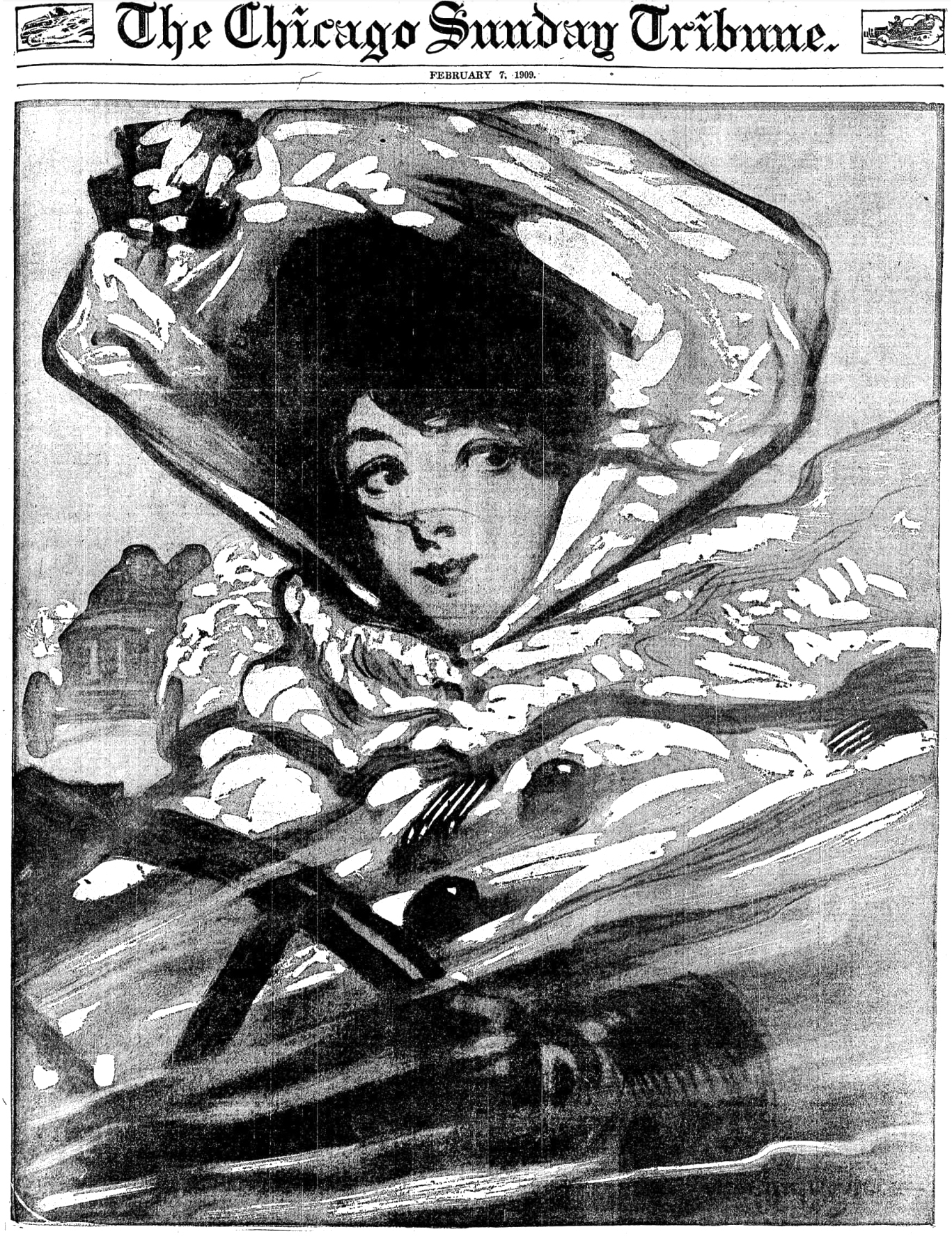 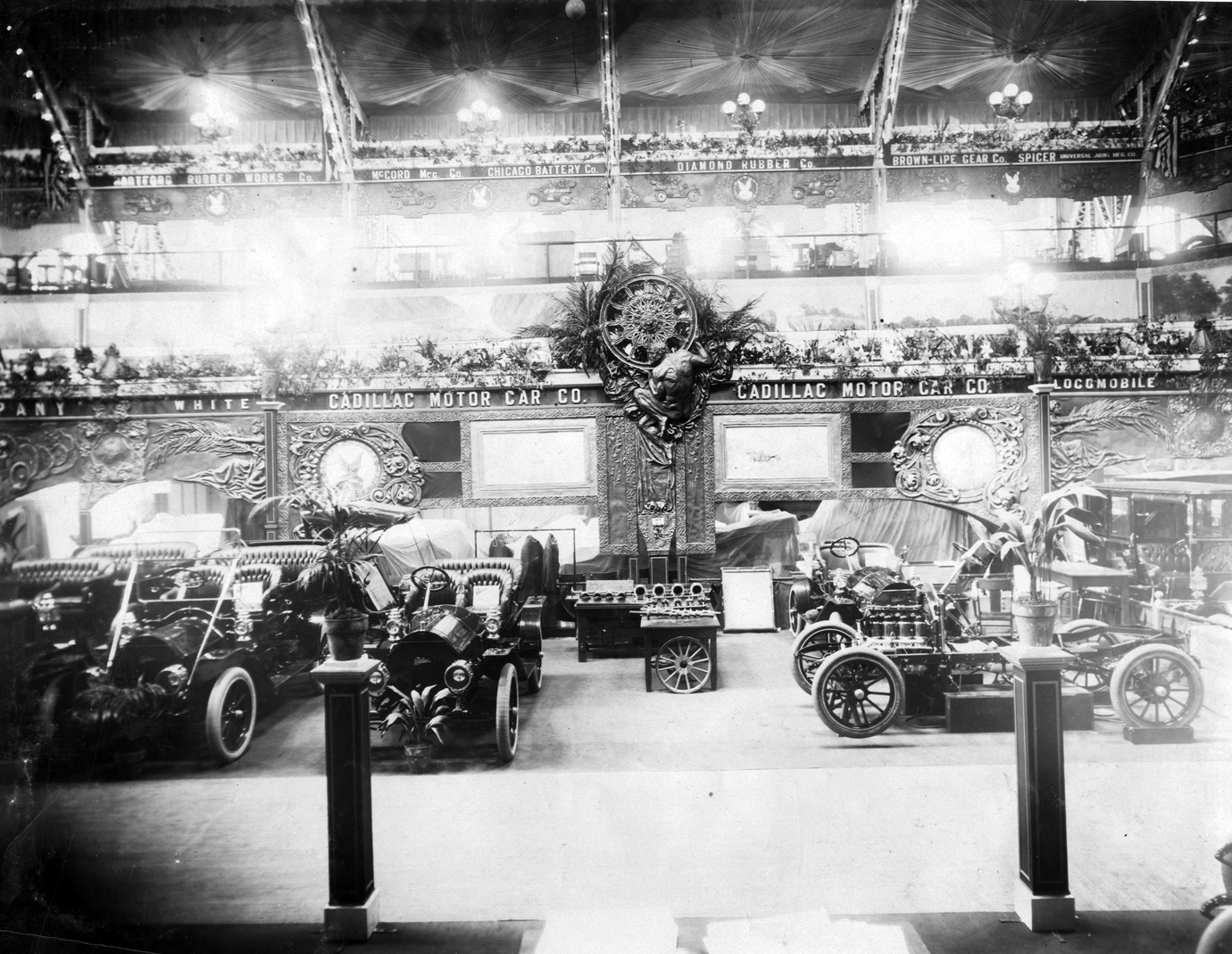 Thomas B. Jeffery and Company 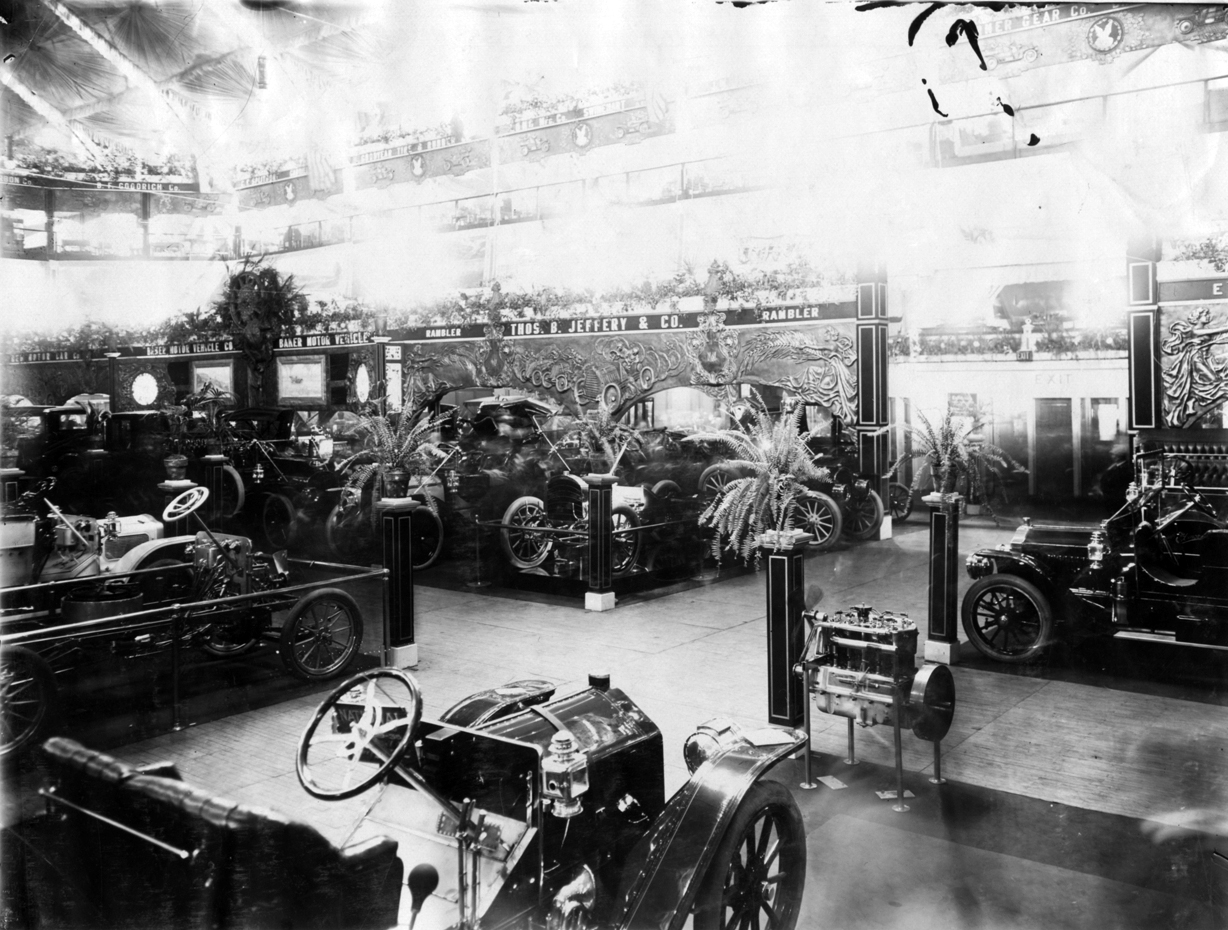 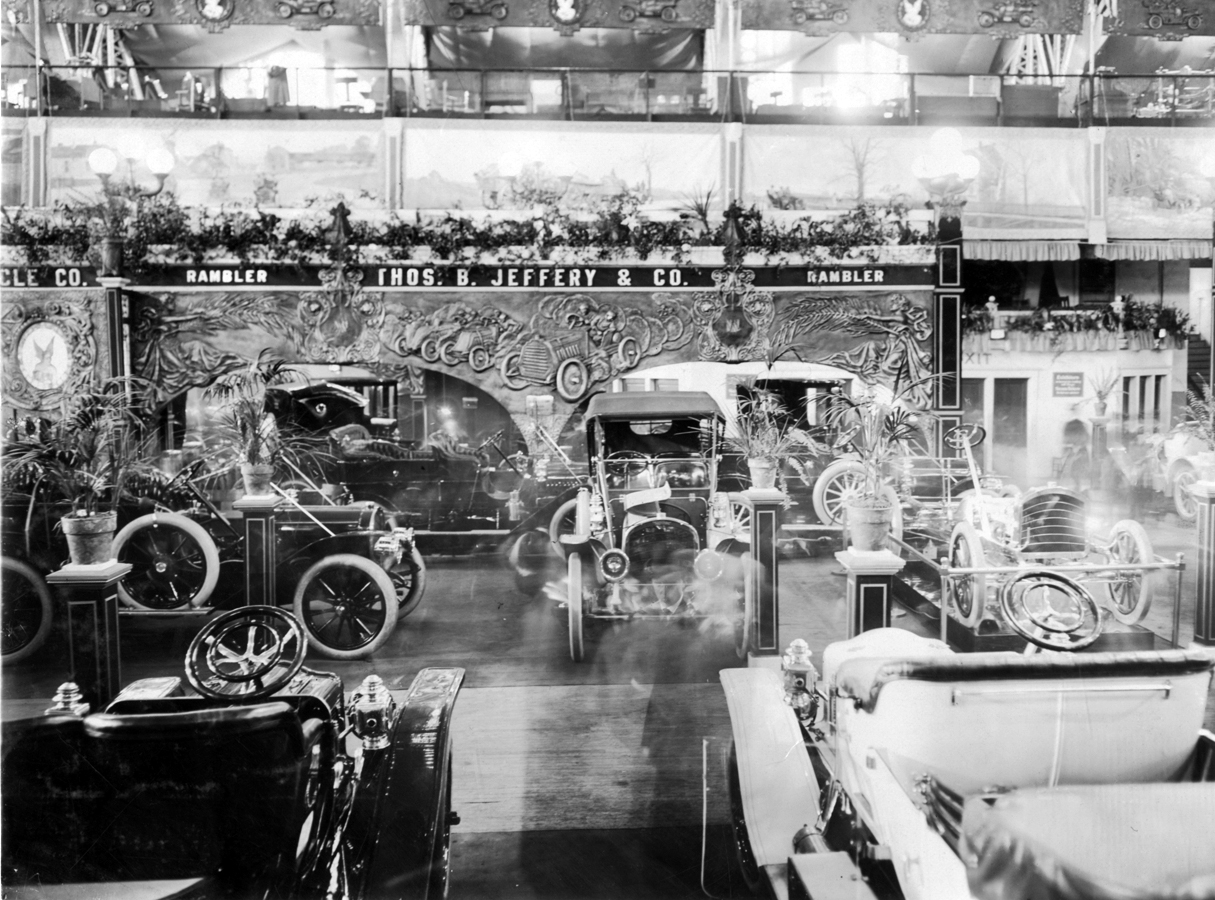 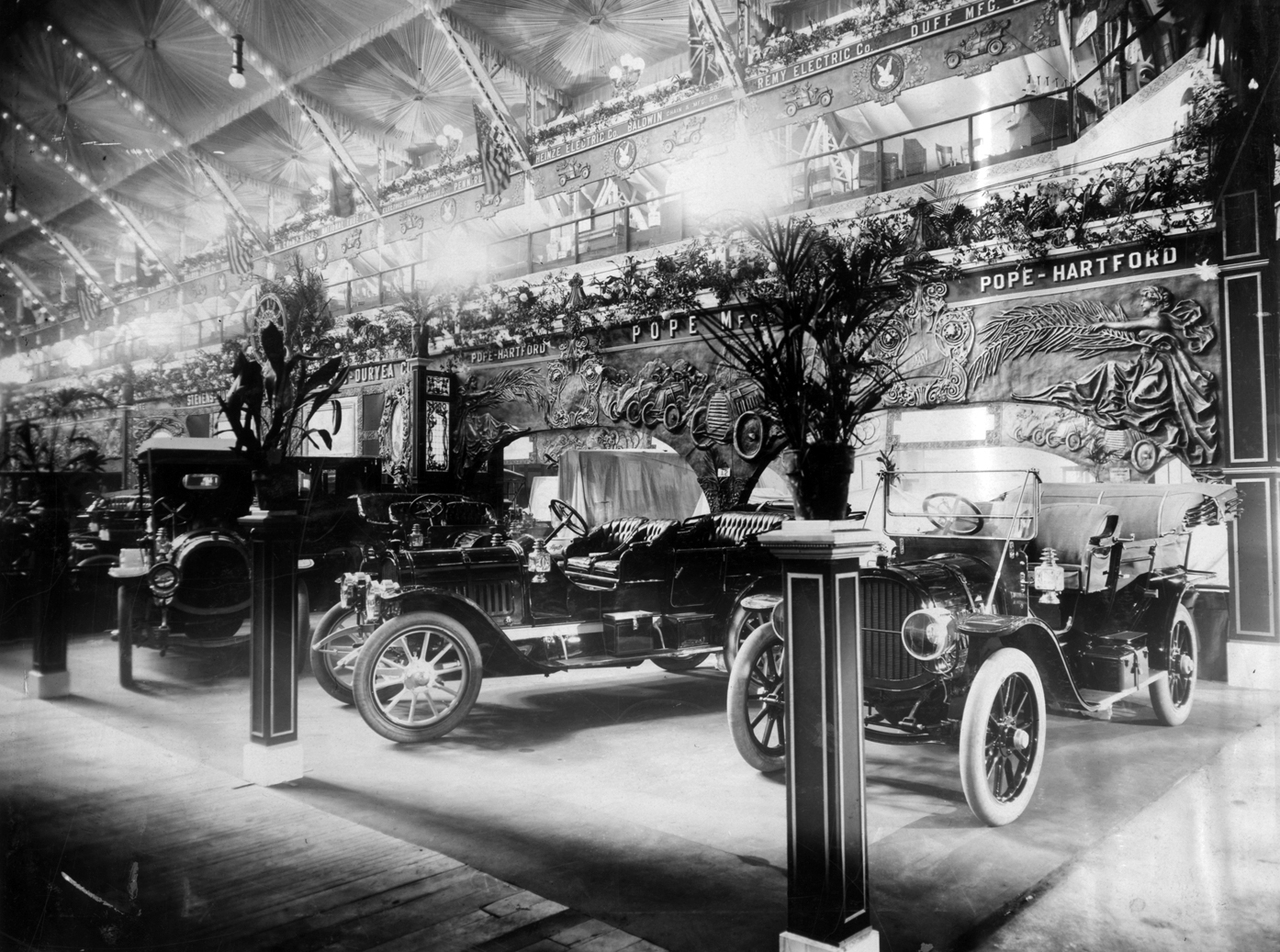