In number and value of exhibits, in amount of invested capital represented, and in expected financial results, the Chicago Automobile show which opened at the Coliseum yesterday will be the greatest exposition of its kind ever held in the world. Paris and New York have had great expositions in other lines in past years, but none of these have equalled the present show.

When the doors opened at 2 o’clock yesterday there were $800,000 worth of automobiles in the building to be inspected by the visitor. There was also at least $100,000 worth of accessories, such as lamps, tires, and other ornamental but less essential automobile accompaniments, on exhibition. The management of the show covered the interior of the building with $1,750 worth of decorations, and paid several hundred dollars more to have them put there. Each exhibitor did his best to make his space attractive, with the result that the decorations alone on some of the exhibits cost $500. The show is undoubtedly the most expensive exposition ever held in this or any other country.

For Those Who Have Money.
Though the admission is nominal, it is a show for those who have money. The per capita attendance during the week is a secondary consideration. It is the attendance of prospective and possible buyers, the persons who can afford to ride in automobiles, in which the management and exhibitors are interested. To attract this class no expense or entertainment is spared, and in securing it there is every prospect that the management will be surprisingly successful.

Mrs. Palmer First.
Mrs. Potter Palmer was the first woman to enter the doors of the Coliseum when they opened yesterday afternoon. Previous to that she had spent almost the entire morning inspecting the vehicles and discussing their merits and attractions with the exhibitors who were introduced to her. She was highly interested in the exhibit and entered several of the cars to test their accommodations more thoroughly.

The attendance yesterday afternoon and evening was double that of opening day last year. At 4 o’clock there were 3,000 visitors in the building. A number of visitors were at the show from Milwaukee and neighboring towns, and the exhibitors were enthusiastic over the prospects for a successful week. The show will be open today.

The Coliseum is an ideal building for such a display as the automobile show. In the center of the immense building are the spaces occupied by the manufacturers of machines. Around the edge of the building, under the gallery, are the she spaces of the manufacture of accessories. Everything from electric welding of steel tubing to dainty memorandum books for tourists are shown in the booths under the gallery. There are even a few automobiles there, for not all of the manufacturers could secure space on the center floor.

In the annex building machines, accessories, and even electric launches are shown. In one corner of the first floor is a cafe, where refreshments may be secured to whet the enthusiasm of a prospective purchaser. On the second floor of the annex, and reached by way of the gallery of the larger building, is the headquarters of the National Association of Automobile Manufacturers. This room is tendered by the association as a smoking-room to visitors and exhibitors. A complete restaurant in one corner of the large gallery completes the equipment for continuous residence at the Coliseum during the show. 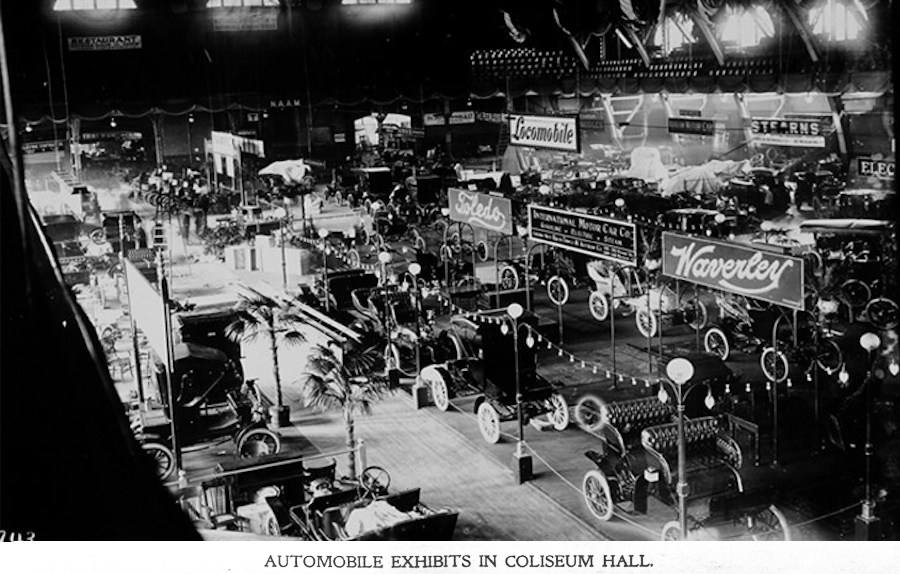 Strips of green and yellow bunting cover the inside of the immense dome of the Coliseum. The same shades of bunting circle the galleries. Between the steel girders or festoons of electric lights are stands of the arms of all nations. Almost without exception every exhibit has one or more electric lights to proclaim its identity. So many extra lights are used that the lighting capacity of the Coliseum plant has been doubled for the occasion.

Series of Entertainments.
In connection withe the show there will be a series of meetings and entertainments, several of which, besides furnishing amusement, are expected to accomplish important results. The affair in which Chicago automobilists are most interested is scheduled for Monday evening, which is designated as “council judiciary night.”

From this evening’s activity on the part of the Chicago automobilists and their fellow exhibitors, considerable relief is expected to result to members of the Chicago Automobile club. After this evening, it is confidently expected that the members of the committee will fail to see any necessity in recommending to the city council that all automobiles be disfigured with large sized numerals.

The representatives of the city fathers will be taken out for a quiet spin over the city’s boulevards in the afternoon. This is expected to show them that the automobile is not an uncontrollable machine, and that the only danger of automobile accidents is due to intractable horses, unmanageable children, and the imaginations of persons who have read bogie stories about “White Ghosts” and “Red Devils.”

After the spin around the city the judiciary committee will be returned to the Coliseum and entertained at a dinner. The exhibit which will be shown them in the evening is expected to open their eyes to the magnitude of the financial interests in the automobile trade. They will also be shown that automobiling in Chicago is not a diversion of a few daredevils, but that the machines are used for both recreation and business by a large share of Chicago society.

Another important meeting is in connection with the show will be in the interest of good roads and held in the Auditorium, Friday evening. It will be under the joint auspices of the National Association of Automobile Manufacturers and the national highway commission. The Governors from surrounding states have been invited to attend as guests of the association, and speakers of national prominence will be present.

Senator Chauncey Depew of New York is expected to be the principal speaker at the meeting. General Nelson A. Miles several weeks ago cabled an acceptance of the invitation from Paris, and will be another speaker if the vessel on which he is returning to the United States arrives in time for him to reach Chicago before Friday.

Mayor Harrison will precede and Governor Yates has promised to be one of the speakers. Colonel Moore of the national highway commission will represent the United States government at the meeting. Isaac B. Potter, of fame as an agitator of good roads is the halcyon days of the League of American Wheelmen, will be another speaker. It is expected that the meeting will have a substantial result and that not only will the benefits of good roads be shown to the visiting executives, but that an improvement of the highways in this state and others will result. A number of Governors have sent telegrams of acceptance.

On Thursday evening the National Association of Automobile Manufacturers will give a smoker and vaudeville to friends in their rooms in the annex. Members of the association, trade representatives, and visiting automobilists will be the guests at the smoker.

Another important question which will be informally considered by local and visiting manufacturers is the endurance and road test of business vehicles. A majority of the persons interested in the sport in this country favor making the test over the roads between New York and Chicago, and it is possible that such a course will be definitely agreed upon before the show closes next Saturday evening. A run without stated controls, is now favored, with one objective point, and the winner to be determined upon the elapsed time for the trip. If this condition is decided upon there will probably be a new automobile record for the New York-Chicago run made this summer.

The show is given under the joint auspices of the National Association of Automobile Manufacturers, the Chicago Automobile club and Samuel A. Miles. The national association controls automobiling in this country, as the L. A. W. controlled bicycling, and the jockey clubs now control horse racing. It is both the local automobile club in New York city and the national organization.

Only Two Shows This Year.
Only two shows are given under its auspices this year, the one here and the one in New York. All other shows are local affairs in which out-of-town manufacturers cannot exhibit under penalty of being expelled from the organization.

The Chicago Automobile show co-operates with the national association in bringing the exposition to this city. Its officers, who are associated in the management of the show are:

Samuel A. Miles has a lease on the Coliseum for five years for the purposes of an automobile show, and if the other two organizations want to show in Chicago they musty co-operate with him. He is the active manager of the exposition.

Harry Unwin of Brooklyn, secretary of the National Association of Manufacturers, is here to represent that organization. J. B. Porter of Chicago is the press representative of the show.

No Speed Contests.
There will not be any speed tests or official comparison of exhibits during the show. In the annex will be a speedometer, or roller carriage, on which the exhibitors of electric motors will have an opportunity to tun their devices and demonstrate the length of time that a single charge in their batteries will carry them.

Chicago’s boulevards will be the unofficial testing track for the exposition. At one time the project of having a track at the Coliseum on which the machines could be shown in motion was considered, but space for such accommodation could not possibly be spared.

The prospects are that excellent weather will favor the show and although none of the exhibits may be taken from the building until the close of the show there will be ample opportunity for the manufacturers to demonstrate the efficiency of their machines in action.