More than 6,000 people took advantage of the invitations sent out by the National Manufacturers’ association to attend the opening of the automobile show at the Coliseum last night. Although the exhibits were not yet all in place, and many well-known firms are not as yet represented by a single machine, the show has already taken on all the aspects of a success. Those who attended last night came early and stayed late. There were all styles of vehicles to be inspected, from the steam or electric runabout to theavy and ponderous steam merchandise wagon, with engine and boiler attached. Motor cycles also attracted no little attention.

About fifty exhibitors had all or a part of their display on the floor last night. Tonight it is expected that sixty-seven firms will be represented in full, with all kinds of machines of the motor-vehicle stamp. The entire floor space in the center of the building will be filled with these expensive luxuries, running in price from high $550 up into the thousands. The lowest-priced motor cycle on the floor will cost the wheeling enthusiast who is too old, weak or lazy to propel himself $200. 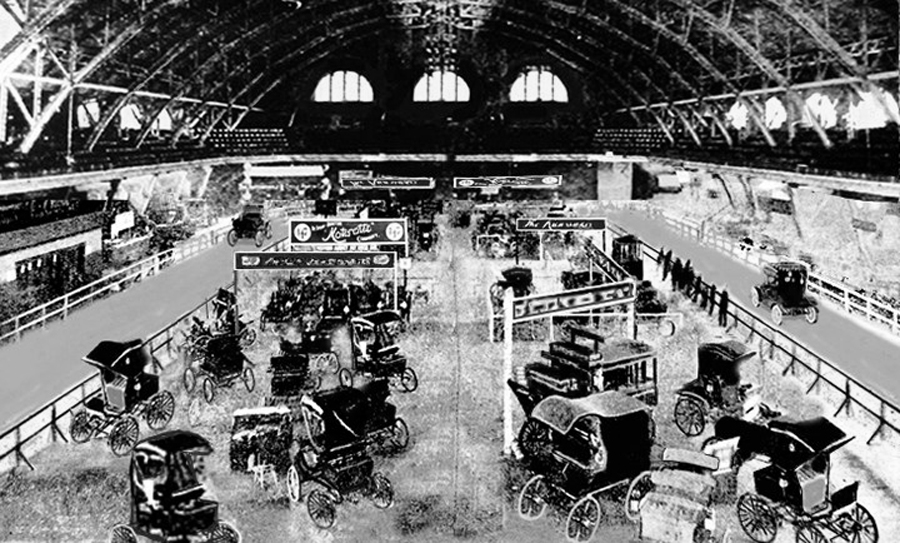 Fine Track Display.
Around the outside of the exhibits a track has been built for showing off the paces of the machines, and this was filled by all descriptions last night. The public in general took advantage of the offer of the manufacturers of free rides, and each vehicle was crowded to its utmost capacity.

There is but one machine that can claim distinction of being in any respect of foreign make. The De Dion-Bouton gasoline automobile uses an imported motor, but with this single exception the machine in all its parts is of American make. The steam automobiles seem to be in the greatest favor. The electric machines ranked next in popularity, while the gasoline machines brought up the rear.

To Test Machine’s Speed.
Last night mechanics were engaged in putting in place a machine based on the same principles as a home-trainer bicycle for testing the speed of the automobiles. The new machine is the invention of Frederic B. Hart of the Motor Age. It will be in position by tonight, when the speed trials will begin. 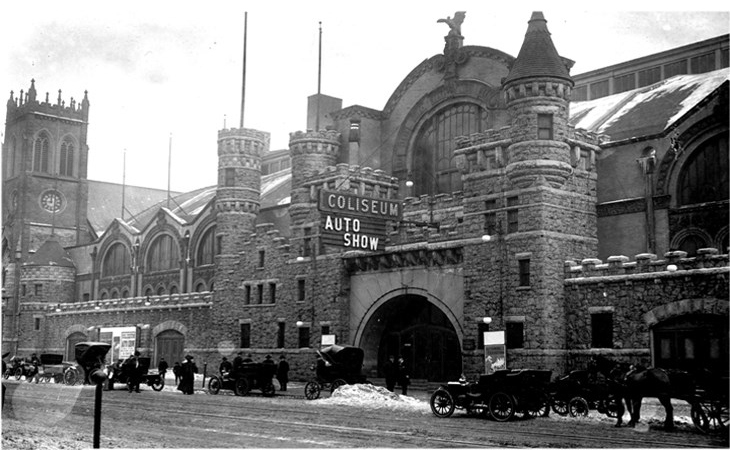 The automobile show just closed at the Coliseum, Chicago, adds another to the already extensive list of the season’s. exhibitions. The exhibitors were in most cases those firms having local agencies, yet not all having such agencies were represented. In this respect the show was disappointing, not affording a broad enough field for comparison, and not bringing to light the improvements expected in this year’s models of the various machines.

The principal exhibitors of automobiles were as follows:

A review of the number of vehicles of each type will show that the electrics were very much in the majority. 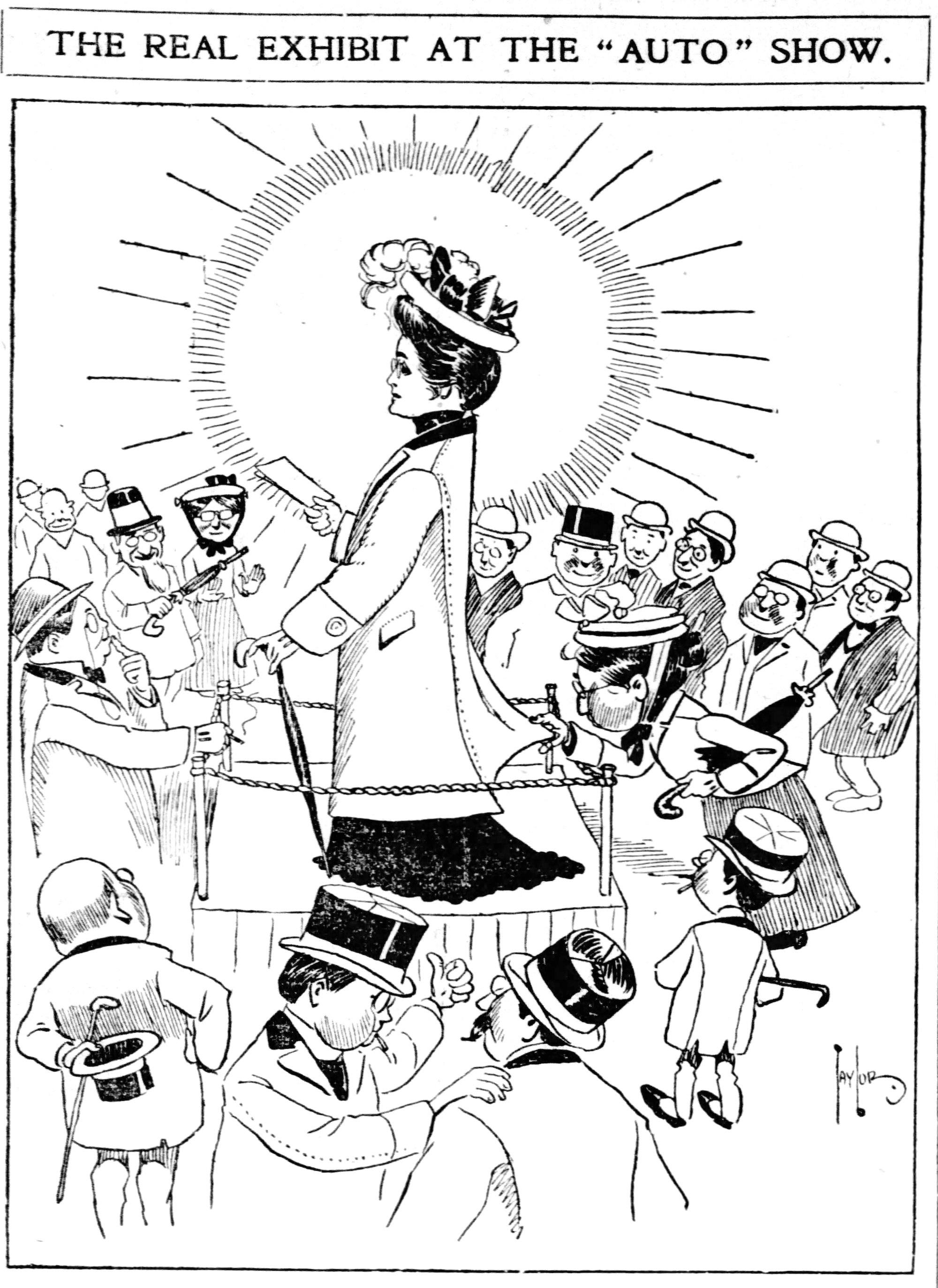 Among the steam machines one which received much attention and much favorable comment as to design and appearance was the steam racer built by the Milwaukee Automobile Company. This machine is not an adaptation of one of the standard machines, but has been designed especially for this use by the company’s Chicago agent, F. P. Illsley, and is a very creditable piece of work. [This vehicle will be illustrated and described in our next issue—Ed.]

Among the gasoline machines the one receiving most favorable comment in regard to quietness of running and ease of control was the Knox three-wheel runabout. This machine captured the honors in the obstacle contest, making one-eighth of a mile, with boxes and barrels every 20 feet, in 57 seconds, coming in contact with but one piece. The machine produced neither smell, smoke nor noise, and demonstrated its facility in turning corners by going around short curves in the track at a high rate of speed.

In the electric class there were many vehicles deserving notice for beauty of design and elegance of furnishings.

The Fanning electric vehicle is a new type of runabout built by the Fanning Manufacturing Company, of Chicago; it is very neat in appearance and has a type of running gear of somewhat novel design.

The exhibitors of parts and sundries were the following:

The Ralph Temple Automobile and Supply Company—This firm represents some twenty or more different manufacturers, and the exhibit was in itself a considerable automobile and bicycle show. It included, among others, the Century steam carriage, with engines set fore and aft and driving the differential direct through bevel gears. This carriage was the only one shown having a foot reverse. The Loomis gasoline carriage, also a part of this exhibit, is a neat appearing machine; it has a Crest duplex motor and is provided with the Upton transmission. The steering handle is outside of the body at the right hand side, and the turning is accomplished by a forward or backward movement of this handle; this arrangement leaves the front of the carriage entirely free.

The Automobile and Cycle Parts Company had a very complete and tasty exhibit of its rolled rims, automobile chains and steel balls.

The Midgley Manufacturing Company exhibited for the first time its tubular steel automobile wheel; although a comparatively new product it received much attention. Several types of wheels. adapted to various purposes, were shown. It may be interesting to know that Major Davidson. of Northwestern Military Academy, who is designing a gun carriage with which he expects to make a trip to Washington this summer. has his machines equipped with this wheel. together with the New York long distance tire.

Baldwin Cycle Chain Company, many styles of chains and sprockets.

A novelty in electric automobiles was shown by a Chicago inventor, in a machine having two 8—foot driving wheels, with motors in the hubs, the seat and battery being hung on springs between the wheels. The idea of the inventor is that to make a storage battery efficient and lasting it must be protected from jars and shocks, and that the large wheels overcome obstacles much easier than small wheels. Another point claimed is the ideal simplicity of the arrangement, there being but two bearings on the machine, and the steering being effected by means of two brakes, one on each wheel, by applying one brake or the other, thus retarding’ the wheel on the side to which it is desired to go.

A spectacular feature was a speed registering machine, on which a carriage could be placed and run at any speed desired while tied to a post behind.

It must be said that the track manners at this show were not above reproach; to the lack of good track management are due a number of accidents, some of which were very serious indeed. The drivers were allowed to run their machines at any speed desired, pass others at any time or place, and even novices were taught to handle machines when the track was occupied by many other vehicles. In short, it seemed that the track part of the affair was decidedly “go as you please,” and a good portion of the time of one or two men was required in repairing the railing around the track where machines had been lost control of and broke through.

The running gear of the Milwaukee Automobile Company’s racing machine is shown in Fig. I. It is made of extra heavy tubing, and extra braces are introduced to resist any shocks due to collision or other accident. The reach tubes, the two front axle tubes and the rear axle truss tube are each of 1% inches diameter and No. 16 gauge. The rear axle sleeve is of 1% inches diameter and No. 12 gauge. The braces are of % inch tubing, No. 16 gauge. The body is also heavily built and strengthened by steel braces below. The beak extends forward over the running gear and ahead of the front wheels tovprotect these parts from accident. The engine is of the Milwaukee Company‘s standard type, with special lubricating features for the crosshead, cran-k shaft and crank pins, and these parts may be entirely ‘inclosed to protect them from dust.

The boiler is of special design, 23 inches in diameter and 14 inches in height, and, has 850 %-inch copper tubes. giving nearly 140 square feet of heating surface. Side steering is employed. and the machine has but a single brake, which acts on the differential. 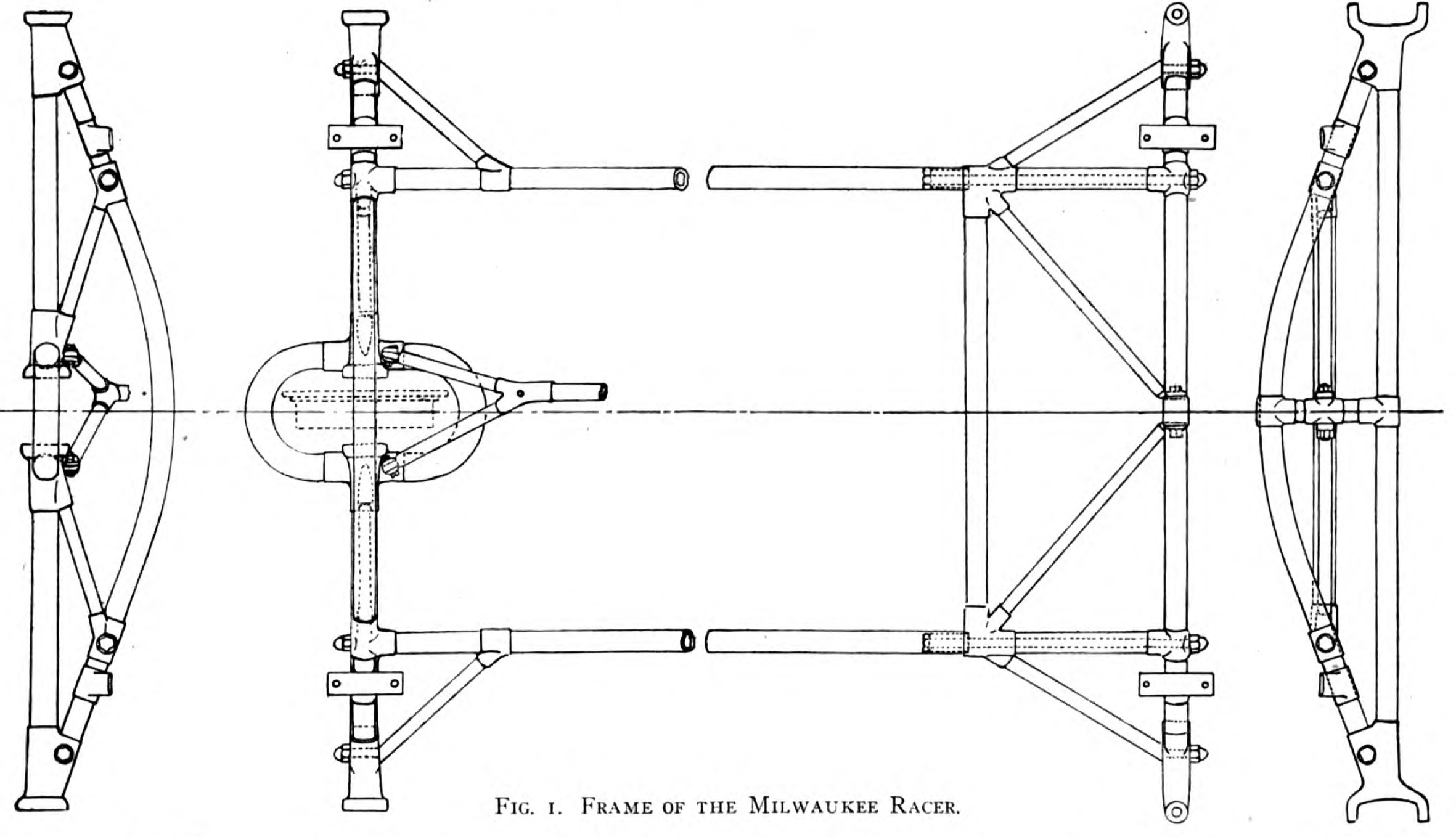 The gasoline tank is in the forward part of the body and holds I4 gallons of fuel. The water tank is placed around the boiler, as usual, and holds 36 gallons. It is expected that the machine will be capable Of maintaining a speed of from 60 to 70 miles an hour.

Fig. 2 shows a sketch of the Loomis muffer.

This muffler consists of an outer cylindrical shell, covered with thick asbestos, and containing on the inside a diaphragm having a number of tubes passing through it. These tubes extend some distance beyond the diaphragm on either side. The gases enter the muffler through the central pipe and are cushioned, to some extent, by the length of pipe beyond the outlet. On entering the ?rst chamber they are slightly expandcd and are. then transferred to the second chamber through the small tubes. Here they are again expanded and ?nally they are delivered to the atmosphere at a sufficiently low pressure, it is claimed, to avoid noise. The object of the small tubes extending inward. it was explained, is to allow the gases to cushion against the diaphragm before passing to the other chamber or to the atmosphere. The tubes in the middle diaphragm are staggered with relation to those in the outer head, thus throwing the gases against the rear walls before allowing them to escape.

There was also shown a steam engine with a novel reversing arrangement. (Fig. 3.) This is a two-cylinder, double acting engine, having between the cylinders two valves. A and B, the upper one, A, controlling the admission and cut-off, and the lower one, B. controlling the release and compression. They are rotary valves driven continuously in one direction by means of valve stems. c c. through spiral gears. D d. The direction of motion is changed by shifting the valves longitu dinally on the shaft. there being two sets of ports in each valve, one for running forward and one for running back ward. Variou$ degrees of cut-off are obtained for interme diate positions of the valve on the stem by means of a special shape of the piston valve. It is readily seen that, since the valves always move at constant velocity. the cut-off will be comparatively rapid, and also. since the exhaust valve is worked independently of the admission valve, the release and compression will be independent of the cutoff, thus giving a steam distribution claimed to be equal to that in the highest class of steam engines. The spiral gears are inclosed in a dust-proof case. and as the valves are balanced it is expected that there will be but very little wear.