A Century of Progress 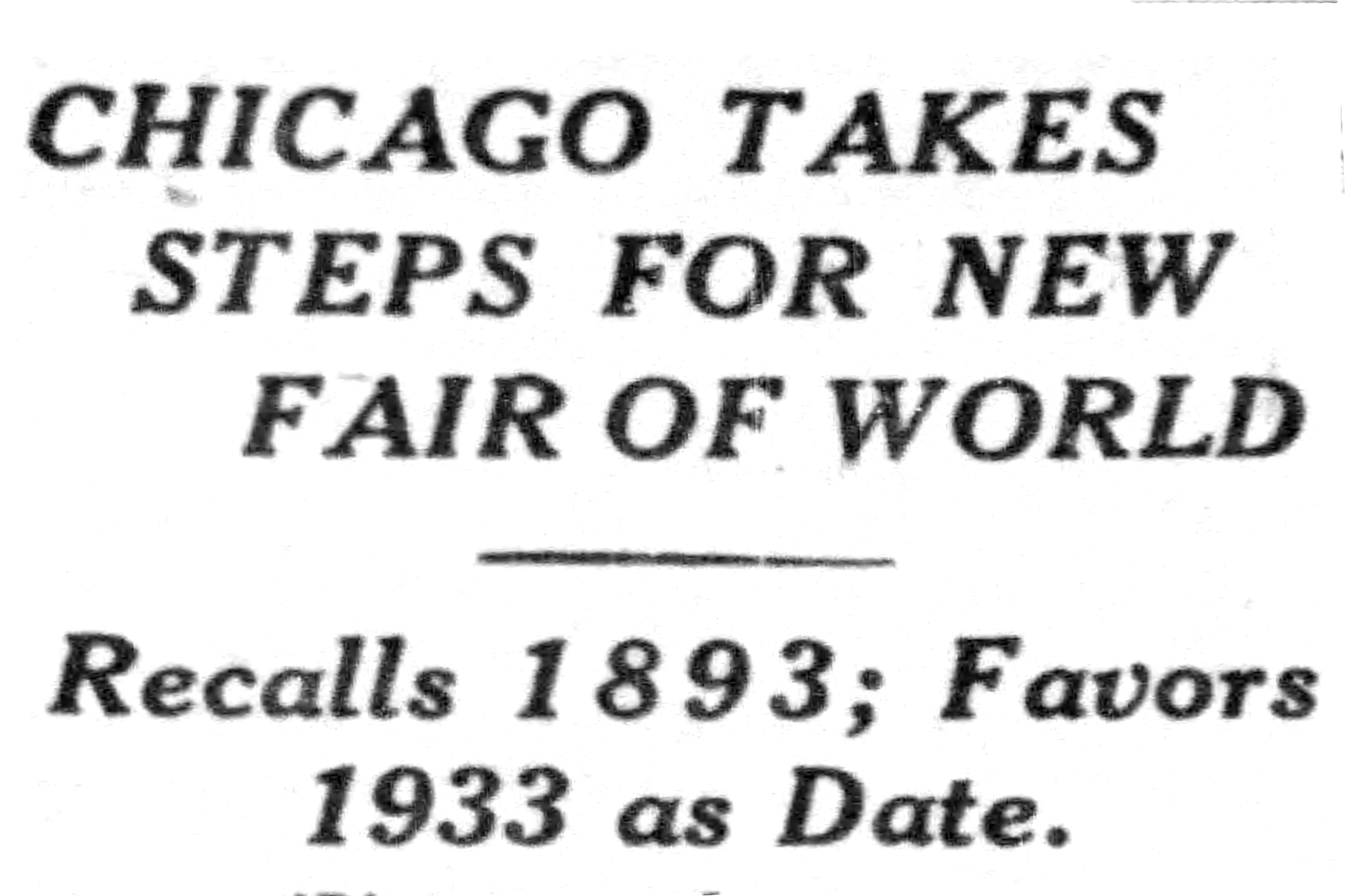 Visions of another world’s exposition here in 1833 or 1837, excelling the historic fair of 1893, began to crystalize yesterday at the first meeting of Mayor Dever’s committee of 200 prominent citizens.

Without exception those of the group who expressed their views enthusiastically approved the proposal. They predicted it would stimulate the city’s progress and unite its divergent elements.

The huge cost, both public and private, was recognized, but it was argued the liabilities greatly would be outweighed by cash from visitors, not to speak of business improvement and higher property values.

All the speakers said seven years were ample for preparation. With a hundred members of the committee present in the city council chambers at noon, Mayor Dever called the meeting to order.

We are to find out, first if another world’s fair is practical, and if so, to make plans for it. It has been pointed out that the time is ripe for Chicago to mark its progress with such an event.

Our great lake front improvements are underway. There will be nine miles of new laqd, unmatched by any city in the world, an ideal exhibition ground.

On a motion by Col. A. A. Sprague, the mayor was chosen temporary chairman and Myron E. Adams, secretary. Dr. O. L. Schmidt suggested the appointment of a ways and means committee of twenty-five. That was done.

The keynote of speeches was struck by Alex R. Revell, a member of the old World’s fair committee.

The same objections have been raised to this exposition as to that of 1893. We overcame them all and it is a hundred times easier now. We should forget the cost element and go ahead.

Others Pledge Support
Cooperation of the Chicago and Northwestern universities was promised by Dr. Max Mason and Dr. Walter Dill Scott.

Melvin A. Traylor, banker, O. K.’d the plan, as did Harry A. Wheeler, William Nelson Pelouze, and others.

Mrs. B. F. Langworthy and Mrs. Harold L. Ickes, speaking for the women’s organizations, said their support could be depended upon. Bernard E. Sunny, member of the south park coard, said the board could offer 623 acres of lake front land for the exposition, which would accomodate 2,000,000 people at one time.

Edward N. Hurley, millionaire manufacturer, will head the committee that will work out plans for the Chicago centennial in 1933, a world’s fair intended to outdo the Columbian exposition in 1893. The event will commemorate the 100th anniversary of Chicago’s foundation as a village.

Mr. Hurley, former chairman of the United States shipping board during the war and nationally known as an active Democrat as well as a business man, was selected chairman of the centennial commission at a meeting of its executive committee in Mayo Dever’s office yesterday.

He promptly accepted the stupendous job of starting the machinery and keeping it in motion to make the Chicago centennial the greatest exposition the world has seen. Many important matters face the committee at the outset, particularly methods of financing it and selecting a site for the big fair.

We will start work as early as possible. I will consult with the members of the committee with a view to selecting a working committee. This should not be hard to do with all the material we have in Chicago. The task is one the people must back up. I am going to do my part as far as hard work goes, but I must have some help, and there is no doubt I will get it.

If I did not feel that the people Chicago and the middle west were enthusiastic for world’s fair, I would enter the work in a different spirit. But the ‘I will’ spirit of Chicago prevails. 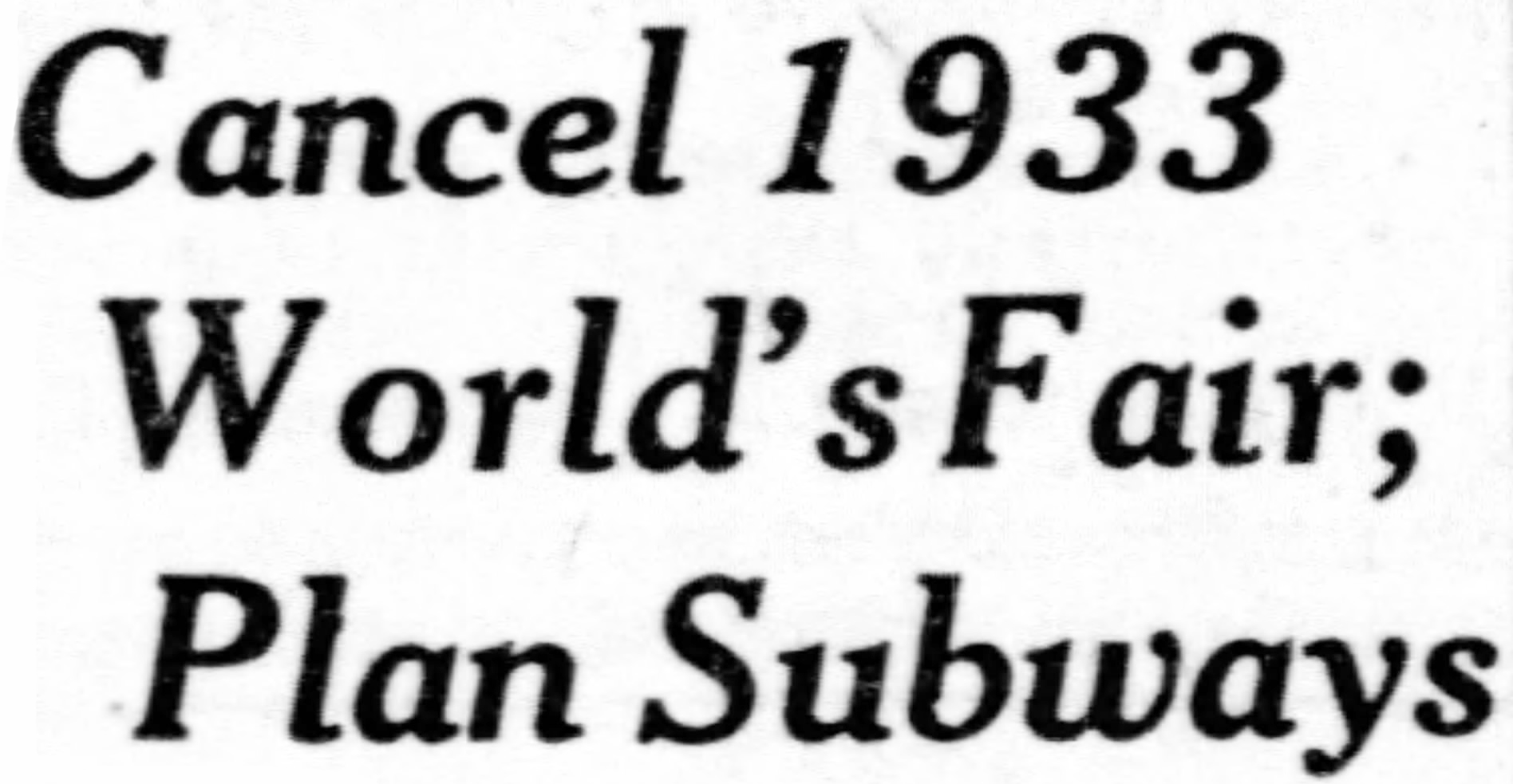 Plans for a world’s fair in Chicago to celebrate the centennial anniversary of the city’s organization as a village have been definitely quashed by the Thompson administration and the mayor’s advisory committee, it was learned last night.

“There isn’t going to be any world’s fair,” one of the prominent members of the committee announced regarding the project of the Dever administration, developeed by a centennial committee headed by Edward N. Healy.

To Say It with Subways
Instead of holding a world’s fair, the spokesman for the advisory committee announced that 1933 is to be made the focal point for the culmination of all public improvements that are under way or are proposed. Subways are to be completed, he said.

Lake front improvements, including the completion of the series of south park islands and the outer drive, are to be completed. The $15,000,000 town hall will be finished. Various road widening projects are to be consummated. “It is to be a gala year,” the spokesman declared.

Conventions of every nature are to be induced to meet in the city. Ravinia, the civic opera, theaters, all entertaining, educational, and business agencies are to exert themselves to the utmost to make 1933 a celebrated year, according to the united opinion of the committee.

Big Exhibition Hall
A substitute plan which would more nearly approach the world’s fair idea has been broached by George Getz, chairman of the committee, and has met with the tentative approval of the mayor. This would provide for the construction of an immense exhibition hall apart from the $15,000,000 town hall, in which would be held a world’s fair each year.

The committee abandoned the world’s fair plan deciding that under twentieth century conditions such an event is provincial and would prove unsuccessful. The last successful world’s fair, they agreed, was the one held in Chicago in 1893. With rapid transportation facilities and with Americans’ habit of travel developed to a high degree, the committees predicted that a fair in which was congregated objects from distant lands would no have the nineteenth century allurement.

Mr. Hurley, it was announced, still retains his connection with the centennial committee. He said that he will serve in an advisory capacity as long as the mayor desires. 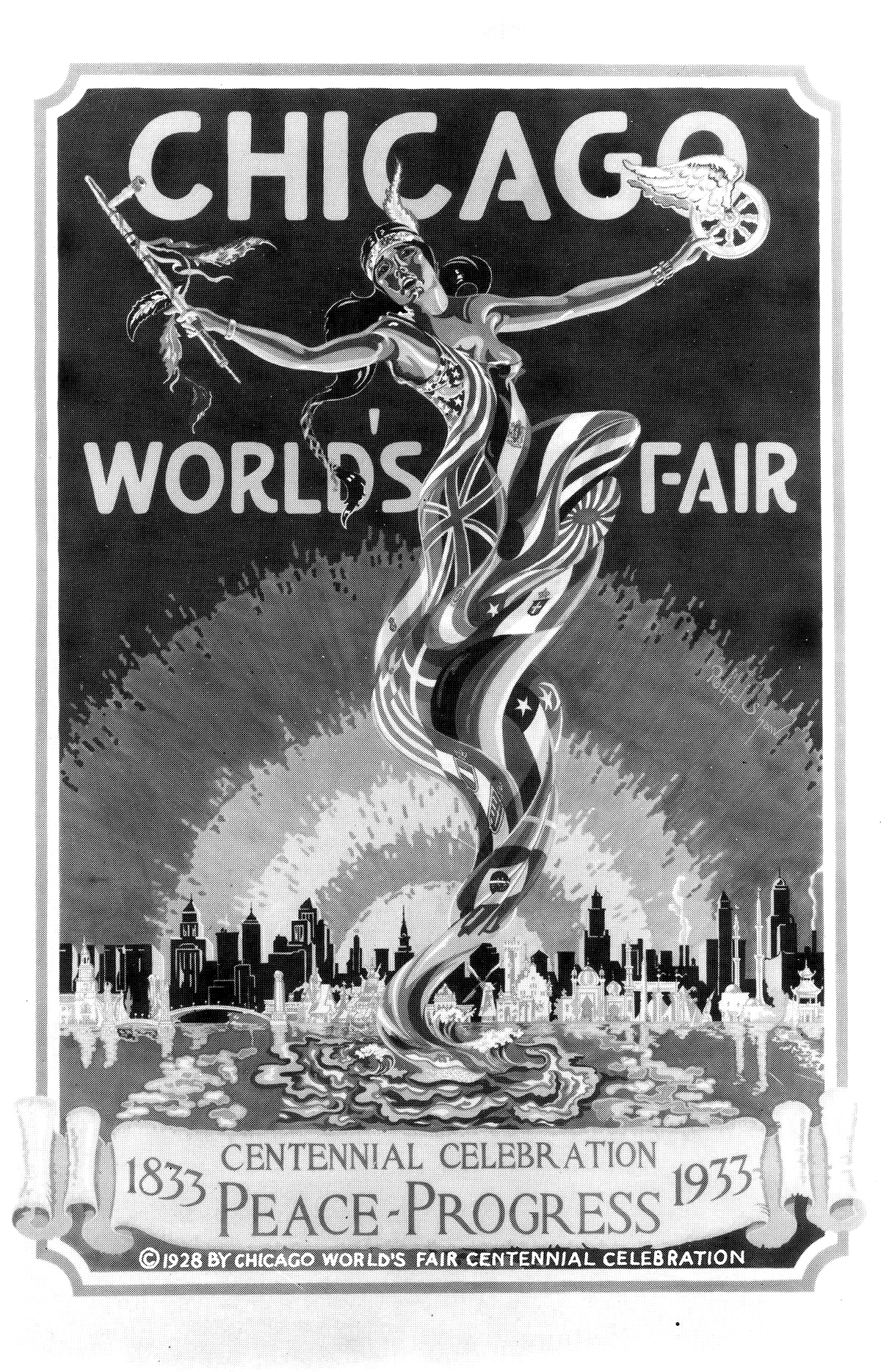 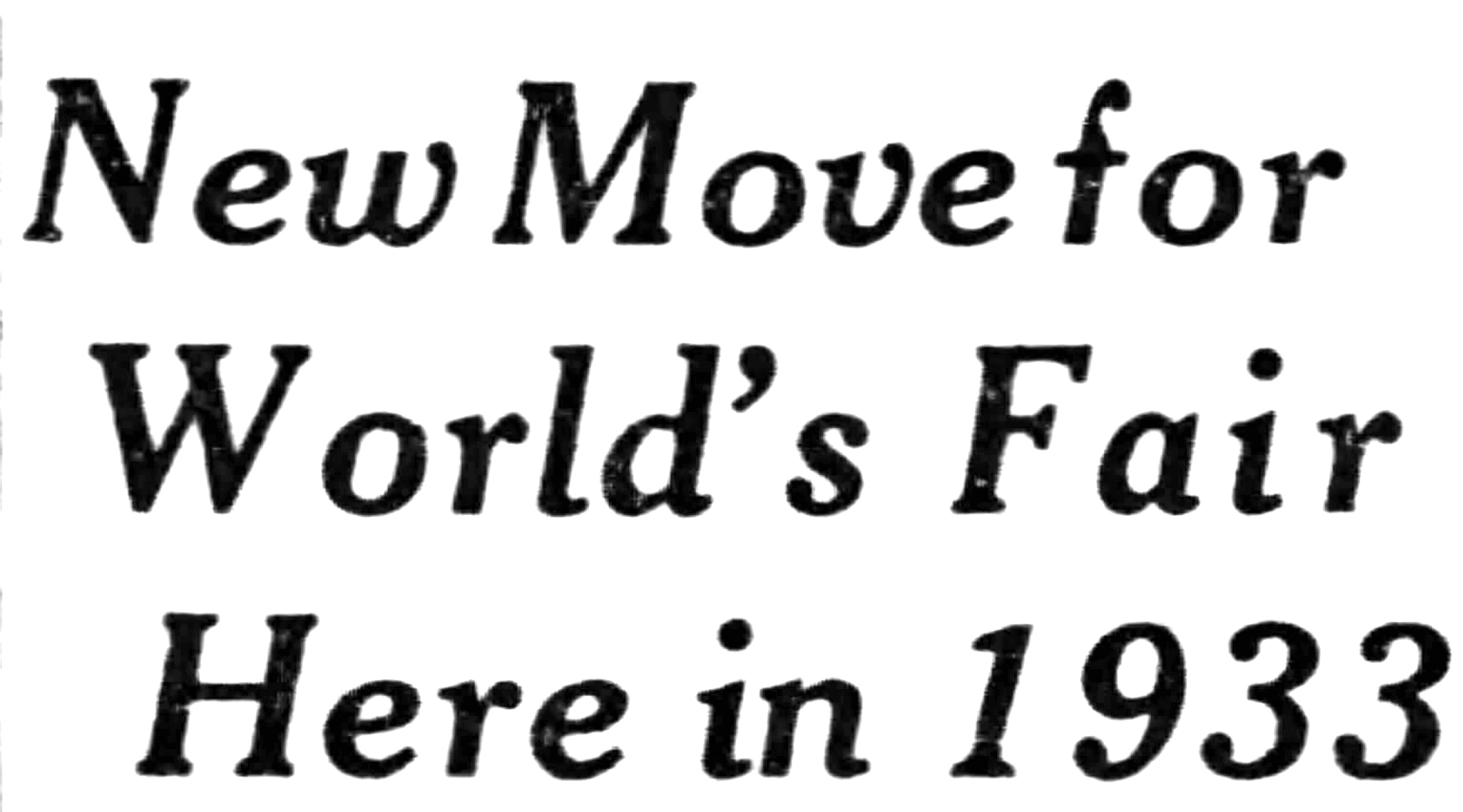 A second world’s fair in Chicago in 1933, planned to eclipse in scope and splendor not only the Columbian exposition of 1893, but all like events since held elsewhere, became a virtual certainty yesterday when Mayor Thompson officially indorsed the project.

The mayor agree to assume leadership in the fair movement after 250 of the city’s leading citizens, assembled at the city hall, unanimously adopted a resolution urging him to do so. Previously, since his election, he had refused to commit himself to the proposal until convinced that public sentiment is favorable.

I accept your action as the mandate of the people. We will hold the fair, and it will be the biggest the world has ever seen.

Planned Under Mayor Dever.
The mayor’s sudden decision to get behind the fair project, after indicating that he might oppose it, was regarded at the city hall as a master stroke of political diplomacy. Originally the plan was conceived under the regime of former Mayor Dever, who formed a commission, headed by Edward N. Hurley, to promote it. With the advent of Mr. Thompson, the proposal grew cold until revived, ostensibly by Mr. Peterson.

After several preliminary citizens’ meetings, all favorable to the fair, the city treasurer initiated the convocation yesterday, the mayor appearing at the height of enthusiastic speech making and announcing, with a note of drama, that he would take up the project, thus making the fair a Thompson, rather than a Dever event.

The mayor said he is opposed, however, to calling the fair the Chicago Centennial or designating it a celebration of the city’s 100th anniversary as a municipality, as proposed by the Dever commission. It should be called the Second World’s Fair, he said, not only to utilize the prestige of the old name but because it will be an international, not a local affair. Not only should the federal government give aid and money, he said, but foreign governments should invest heavily in buildings.

Adopt New Name for Fair
“A Century of Progress” is the new name officially adopted for Chicago’s centennial celebration.

SUMMARIZATION OF THE HISTORY OF CHICAGO’S SECOND WORLD’S FAIR 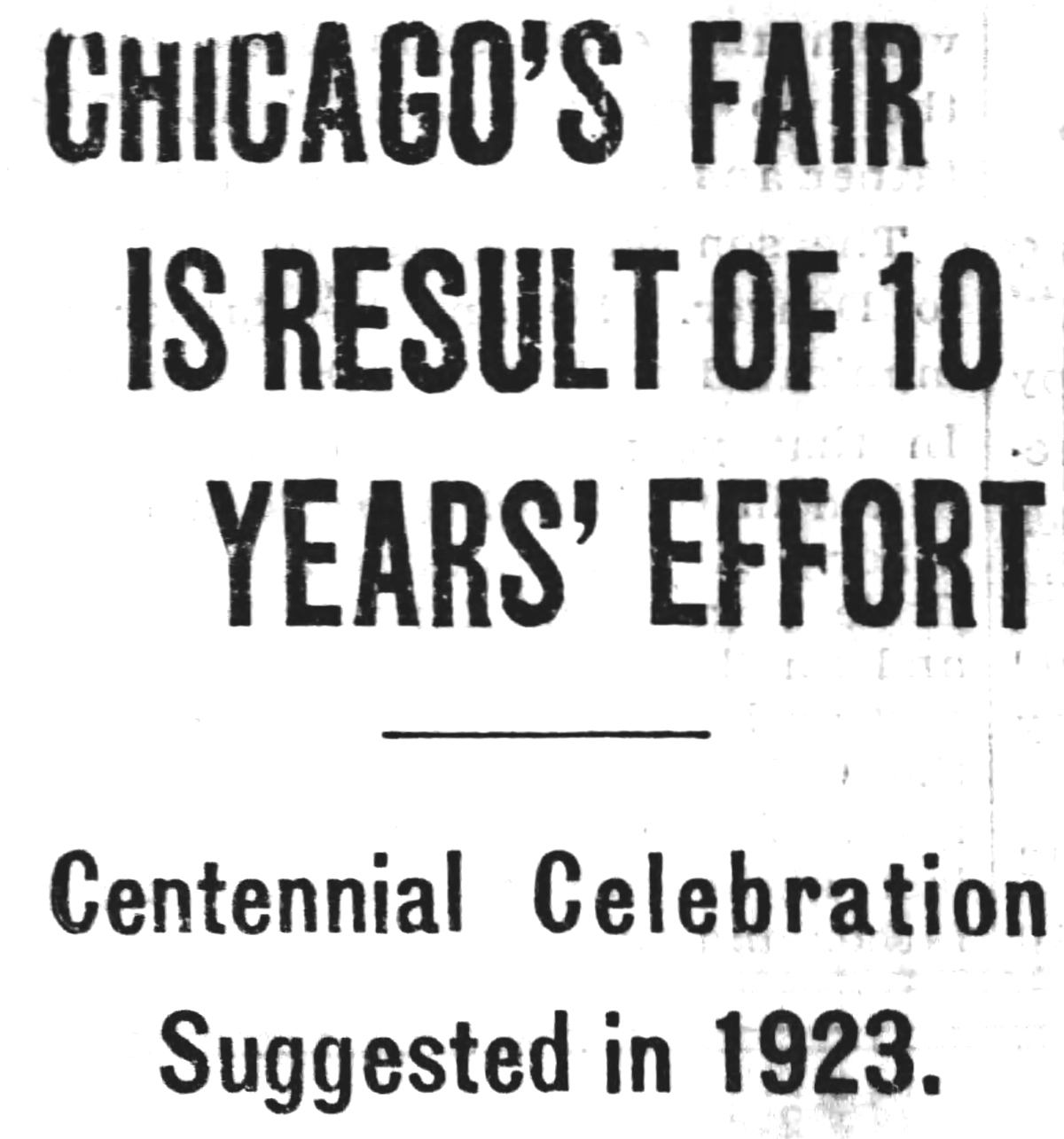 Ten years ago the first suggestion was made that Chicago celebrate its centennial in 1933 when Capt. Myron E. Adams, minister and social service worker suggested to the mayor, the late William E. Dever. that the city make some sort of official recognition of the hundredth anniversary of its birth. The date of this suggestion was Aug. 17. 1923. Capt. Adams died in 1930.

Admittedly the first step toward a World’s Fair, the Adams Plan, however, did not become A Century of Progress Exposition. Mayor Dever appointed a committee of citizens, and some slight progress was made in the succeeding four years, consisting mostly of of the project by civic organizations and the city council. But so lukewarm was the support that in August. 1927. the committee reported that no enthusiasm for a fair could be found.

Dawes Elected President.
For the next few months the plan languished. There was almost no zeal for any sort of celebration until on Dec. 13, 1927, Charles S. Peterson named chairman of a new World’s Fair committee. One week later this group met at the Chicago Athletic association. Rufus C. Dawes Was elected president of ‘Chicago’s Second World’s Fair Centennial Celebration,” and at last the wheels began to turn.

Mr. Peterson was elected president and Daniel H. Burnham secretary. On Jan. 3, 1928, application Was made for a charter from the state. Two days later the application was granted and on Jan. 9 the first meeting of the board of trustees was held

Still dissatisfied with the name of their project, the trustees changed it to “Chicago World’s Fair Centennial Celebration” and it remained this for almost a year and a half while more important matters. such as the building of a solid financial structure, were being cared for. On June 28, 1929. the name “A Century of Progress” became the official title.

A Job for Chicago Alone.
In the meantime, unlike other great expositions which preceded it, the World’s Fair was progressing purely as a task to which Chicago. and Chicago alone, had set itself. No outside heip was asked. This was the dec!slon of the trustees from the first—they would ask no subsidies from nation, state or city.

So. in April, 1928, the public was invited to join a legion of World’s Fair supporters, each subscribe to donate $5 to be exchanged for ten admissions of the Fair. Principal and Interest gathered from this appeal reached a total of $634,042.

Since money was now on hand, the physical work could go ahead. About three years ago, on May 9, 1930, the first contract for a building—the Administration building—was let and soon its radical architecture contrasted with the classic lines of Its neighbor, the Field museum.

Next, a structure of equally vivid style, the Travel and Transport build-ing, began to rear its bulk a few miles to the south. Then came the stockade and rude log towers of Fort Dearborn, the spires and high planes of the Hall of Science, and the Electrical group. 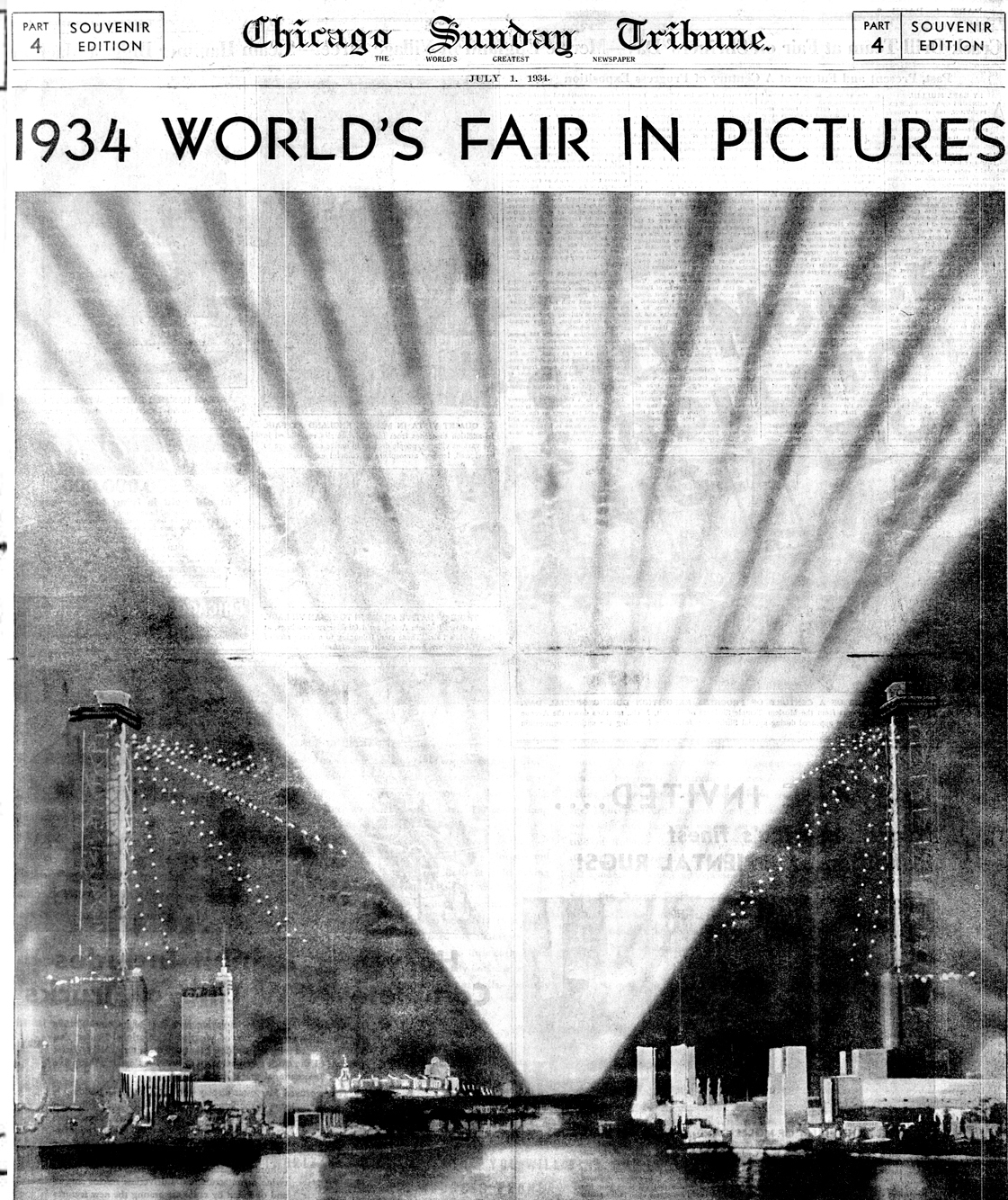