Official Guide 1933 A Century of Progress
in what is called a Spectaculum, you may see something wholly new in motion pictures “natural vision pictures,” or three-dimensional pictures that give depth to the characters as though they were on the stage.

At the Chicago World’s Fair, among the carnivals of its Midway, George K. Spoor, 1 one of the first men to have faith in any kind of motion picture, is repeating his faith in a motion picture of depth as well as of height and breadth, taking his natural vision pictures directly to the general public in a 1,000-seat theatre imaginatively dubbed the “Spoor Spectaculum.”

The actual production offered is “Niagara Falls,” the scenic which, with “Danger Lights2,” a natural vision dramatic feature, was briefly displayed in Chicago and on Broadway in 1930. In those showings, Mr. Spoor was associated with the Radio-Keith-Orpheum interests, which produced “Danger Lights,” in the “natural vision” technique. At the Chicago exposition the indomitable Spoor is “going it alone,” where many thousands from many places, knowing nothing of motion picture precedents, will gather between now and next fall.

To those who pay the 15 or 25 cents charged for admission, a brochure insists, moreover, that this “Spectaculum” thing is not to be the end of it. To quote:

With this new system the production job is to move any theatrical production into the studio, properly prepared with the necessary stage sets, and present the performance before the apparatus for photography and recording of sound, thereby obtaining a permanent record of the performance as done on the stage in a remarkably short time. . . These productions will be presented to the public in the theatres of the legitimate stage, on a screen which receives the play in its normal, full-stage size. 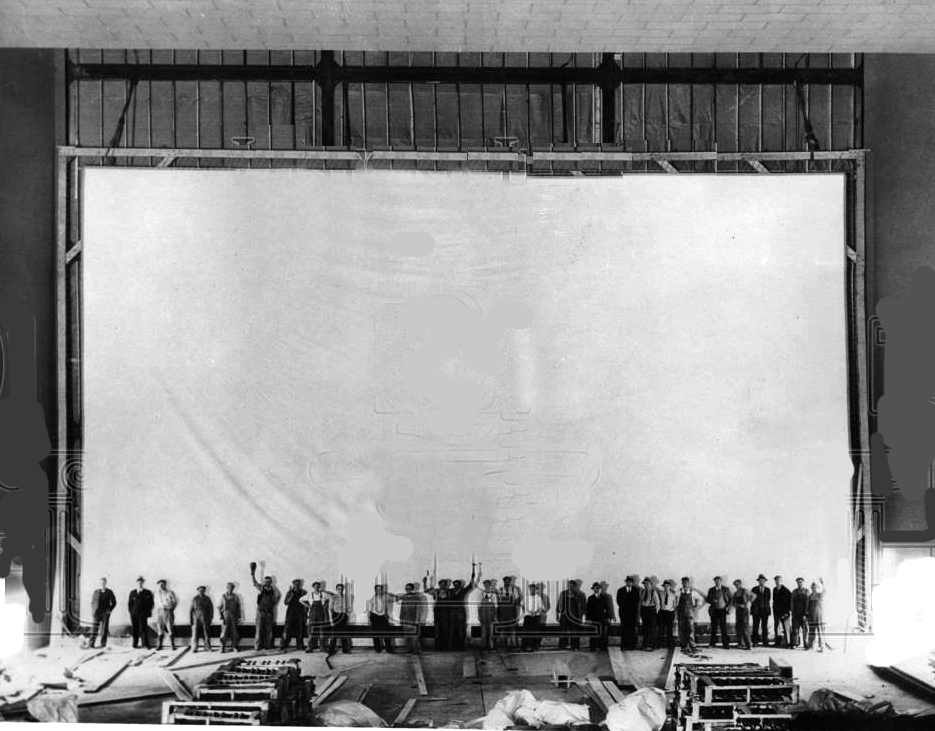 Millions Spent in Experiment
Presumably the revenue from admissions and the sale of the brochures at ten cents a copy at the fair is intended to carry on these subsequent production and theatrical enterprises, for the Spoor faith in quasi-three-dimensional motion pictures, maintained over a period of many years, has been expensive. Up to 1930 this dream, which has tormented many, had taken five million dollars out of that fortune amazingly created by historic Essanay, in a little studio on Chicago’s Argyle street, with one and two-reelers, exploiting the strange arts of Broncho Billy Anderson, Francis X. Bushman, Beverly Bayne and Charles Spencer Chaplin. These successes had come but little after the period in which “The Great Train Robbery” was demonstrating pictures- that-move to the public, in black tents at a thousand county fairs. Because George K. Spoor was of that period, too, it is interesting to observe that except for a hokum exhibition of Hollywood movie-making, the most serious demonstration of the motion picture at this 1933 exposition, dedicated to modern technology, is dauntless George Spoor’s “Spectaculum” on the Midway.

The “natural vision” demonstration at the Chicago fair also introduces to the public sound carried on the film in the form of indentations cut in the edge of the film. Called the Spoor-Lindbergh method, it is another result of the goings-on these more recent years at the old Essanay” plant on Argyle street. Essanay itself is to be sucseeded, it seems, by yet another company, Natural Vision Pictures Corporation. States the brochure:

Natural Vision Pictures Corporation will produce an entirely new type of picture entertainment by means of the equipment licensed to it by the Natural Vision Patents Company, the Spoor-Lindbergh corporation, and the Spoor-Thompson Corporation, at its plant here in Chicago or at such other studios that lend to economy in the particular production undertaken. The Natural Vision Pictures system combined with Spoor-Lindbergh sound recording method and Spoor-Thompson processing system make it possible to offer to the public accurate replicas of stage productions as one sees them on the legitimate stage. This type of picture production is entirely new and can only be done with the equipment of the Natural Vision System, as no other method exists.

Augmenting these remarks personally, Mr. Spoor divulges that he is preparing to purchase two plays of distinction which will be produced by the “natural vision” method, and that upon completion of these, five theatres in five key cities will be opened, “beginning a chain of theatres to introduce natural vision pictures throughout the country.”

A big place. Too big. Not less than 1,500 wooden chairs on one cement sloping floor that leads down to an enormous screen, six times ordinary theatre size. And around 30 admissions per performance. Taking a bath in red ink at $200 a day average and with a bond posted to guarantee that it stays open. Reviewed on the day the World’s Fair reached its highest daily attendance figure, 132,000 persons, and at a peak hour.

Many flaws in showmanship can be itemized. In the first place, the name “Spectaculum” conveys nothing and confuses most people without arousing curiosity. A large facade that is imposing and commands an excellent perspective from both the island and the mainland is allowed to go to waste. There isn’t even a hint of salesmanship on the front which simply reads “Spoor’s Spectaculum” with a smaller scroll, a silly boast, “produced at a cost of over $4,000,000” and a line which lies by nine minutes, “Running time, 22 minutes,”

Not only is there no ballyhoo outside but inside the performance is as flat as a pancake. Just one main title, “George K. Spoor presents the Motion Picture Method of the Future” followed by a list of credits on photography. That’s all. No explanation of the difference between standard film, and Spoor “third dimension.” No mention of the technical or entertainment possibilities. Not even a word to direct attention to the “depth” element. Just that one introductory and amazingly laconic main title followed by 13 minutes of Niagara Falls. Then in intermission.

This is part of the demonstration that was made in 1930 at the State-Lake theatre, Chicago, at which time special installations of the necessary equipment were made by the Spoor group at a reported cost of $22,000. At that time a feature photographed for the wide screen was also exhibited. It was not a box-office success and until the building of the Spectaculum at the World’s Fair, the trade heard nothing further of the third dimensional thing. While admittedly achieving its effects of depth and having possibilities for spectacles and musicals, the industry side-stepped the costs of re-machining.

It’s a cinch this show won’t get anywhere as now handled. A handful of idle curiosity-seekers or foot-weary pedestrians is the best they can hope for unless some theatrical brains are called into consultation and something done to impact life and allurement into what is otherwise a large building with a cashier’s box in front of it.

Huge size, a mistake, naturally accentuates the smallness of the crowd. Oceans of empties surrounding a small island of patrons. Seats that will never be occupied between now and Nov. 1, and meanwhile, four union operators in the booth, ushers in military uniforms, ticket-takers and ticket-sellers, and other employes. 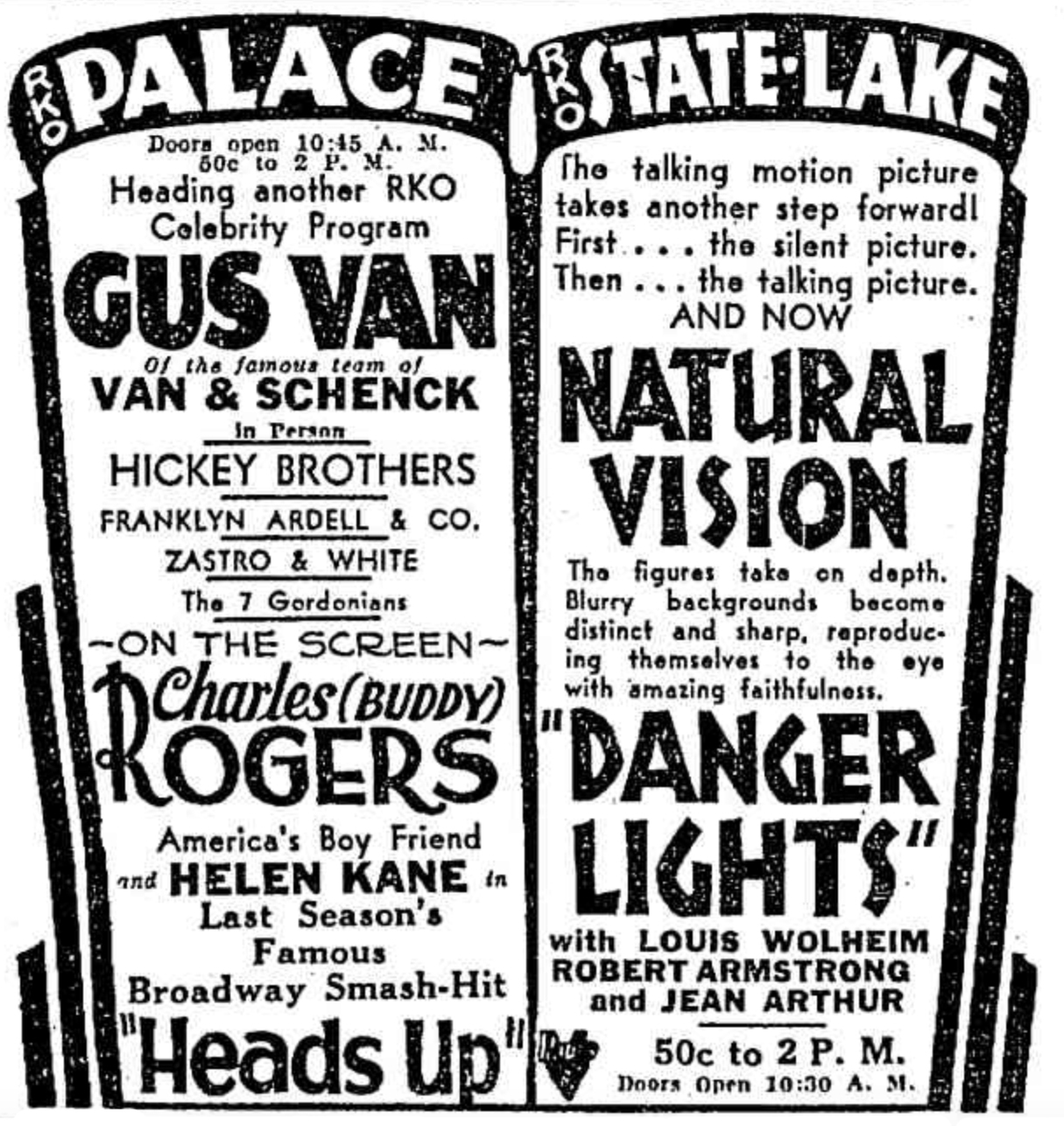 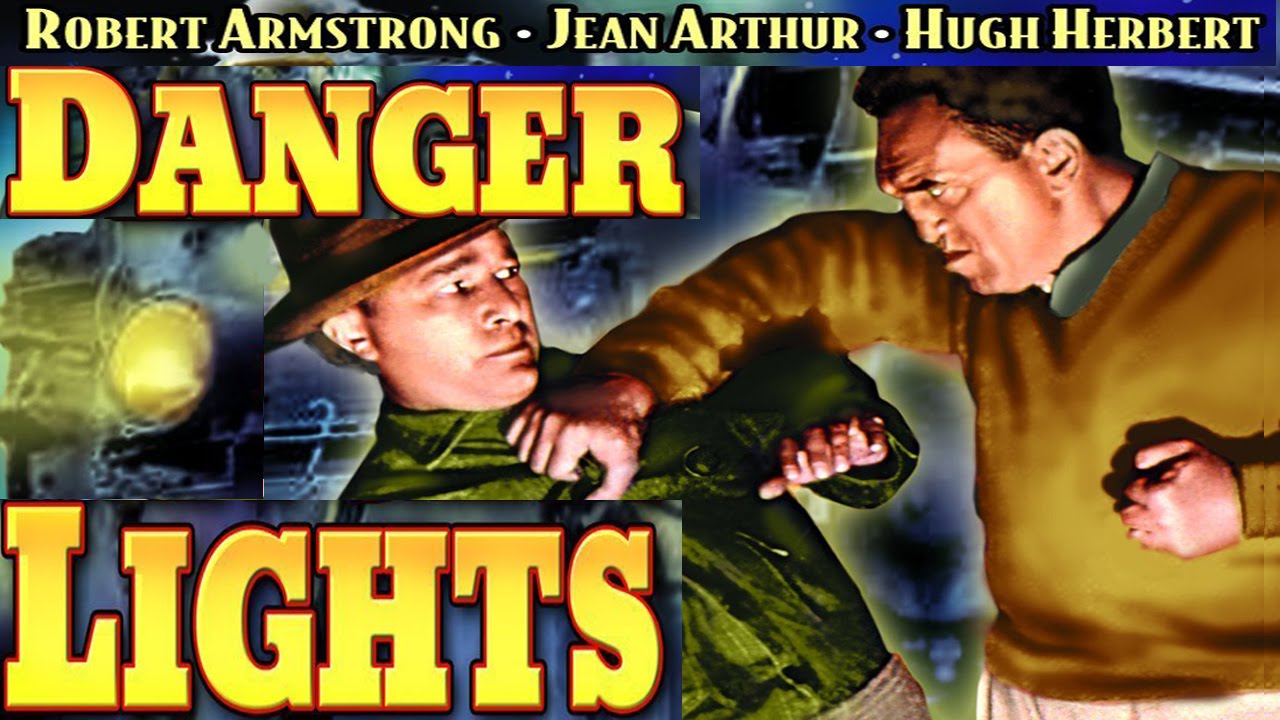 All copies of the widescreen (62.5mm) version have been destroyed. The standard version exists in its entirety.