Radio Flyer Exhibit
Born in Rosa, an Italian town near Venice, he learned cabinet-making from his father and grandfather. The elder Pasins did carpentry work at a palatial Italian estate.

As a youth, Antonio helped them craft an indoor carousel, complete with hand-carved horses.

In 1914, the Pasin family sold a mule to pay for 16-year-old Antonio’s voyage to America—the land of promise, they felt. But arriving in New York City was more like a nightmare. Pasin made his way to Chicago, where he found work hauling water for sewer-digging crews.

By 1917, Pasin had saved enough money to buy tools and rent a one-room shop where he built phonograph cabinets. Sales trickled in, but what really caught the fancy of customers was the wooden wagon that Pasin built to haul tools around his workshop. People were more interested in his wagon than his cabinets.

The Italian immigrant who was born on the Fourth of July dubbed it the Liberty Coaster—a nod to the statue that had greeted him in New York—and sales rolled in. 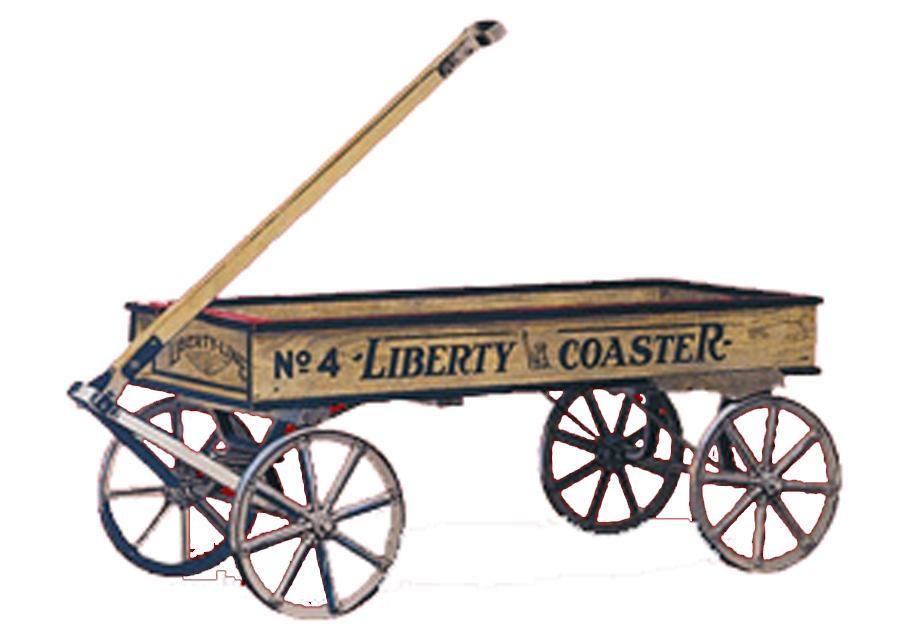 By 1923, he had several employees at his bustling company. But Pasin didn’t coast. His mind always sped toward the horizon and whatever was new.

What was especially new was Henry Ford’s assembly line. Fired up by the carmaker’s manufacturing innovations, Pasin toyed with metal stamping as a way to mass-produce his wagon.

“He was a very technical guy. He was very into how the product was made,” Robert said. “When he saw the metal-stamping technology, he thought: Oh my gosh, I could use this. He went after it full-bore.”

Using scrap pieces, Pasin made a metal version of his wagon and dubbed it the Radio Flyer. The catchy phrase captured the two hottest innovations of the time — radio and commercial flight.

Pasin opened a metal-stamping factory in Chicago and changed his company’s name from Liberty Coaster to Radio Steel & Manufacturing Company in 1930, at 6041 W. Grand Ave (1934 Chicago Red Book). An order for 7,000 wagons put the business in motion. 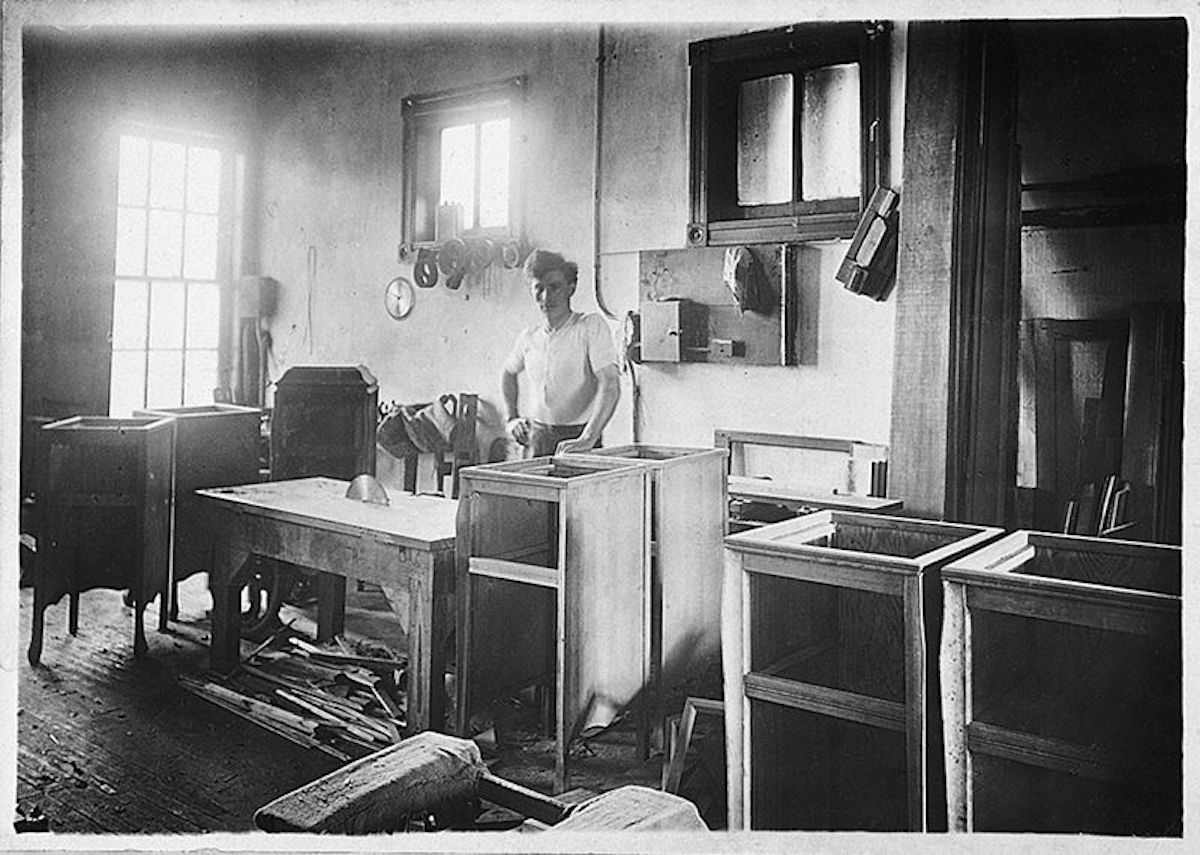 With a toehold on the market, Pasin put everything into his product—”the only wagon that outsells Ford station wagons,” according to a company advertisement. His approach was: “Let’s keep the price low and the margin low, and let’s not invite a lot of competition.”

Despite the depression, Antonio had his sights set on the 1933 Chicago World’s Fair. He took out a $30,000 loan to build a 45-foot-tall structure of a boy atop a wagon, determined to make a statement.

The massive art deco structure housed a kiosk, inside of which Anna helped work a mini assembly line putting together tiny steel wagons that sold for just 25 cents each. They sold more than 100,000 of the trinkets. The Coaster Boy promotion was a huge success that helped spread the Radio Flyer name across the world.

The name Radio Flyer comes from Antonio’s fascination with the new invention of the radio and is wonder of flight.

When World War II put the brakes on the wagon business, Radio Flyer shifted production to the 5-gallon steel Blitz cans that GIs used to tote fuel and water. In 1945, the company received an Army-Navy E Award for excellence in producing essential wartime materials. 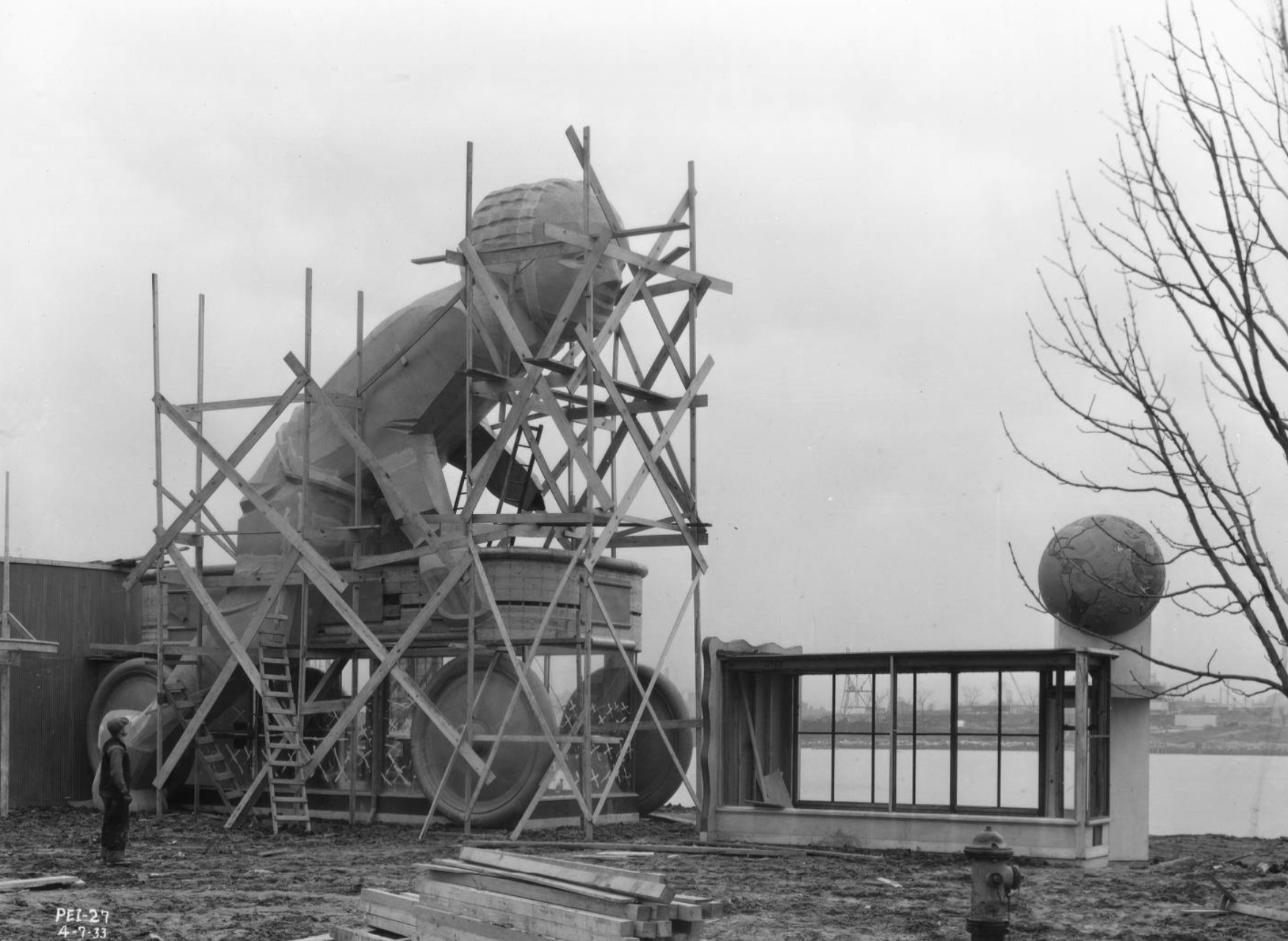 Construction of the Radio Flyer Exhibit. 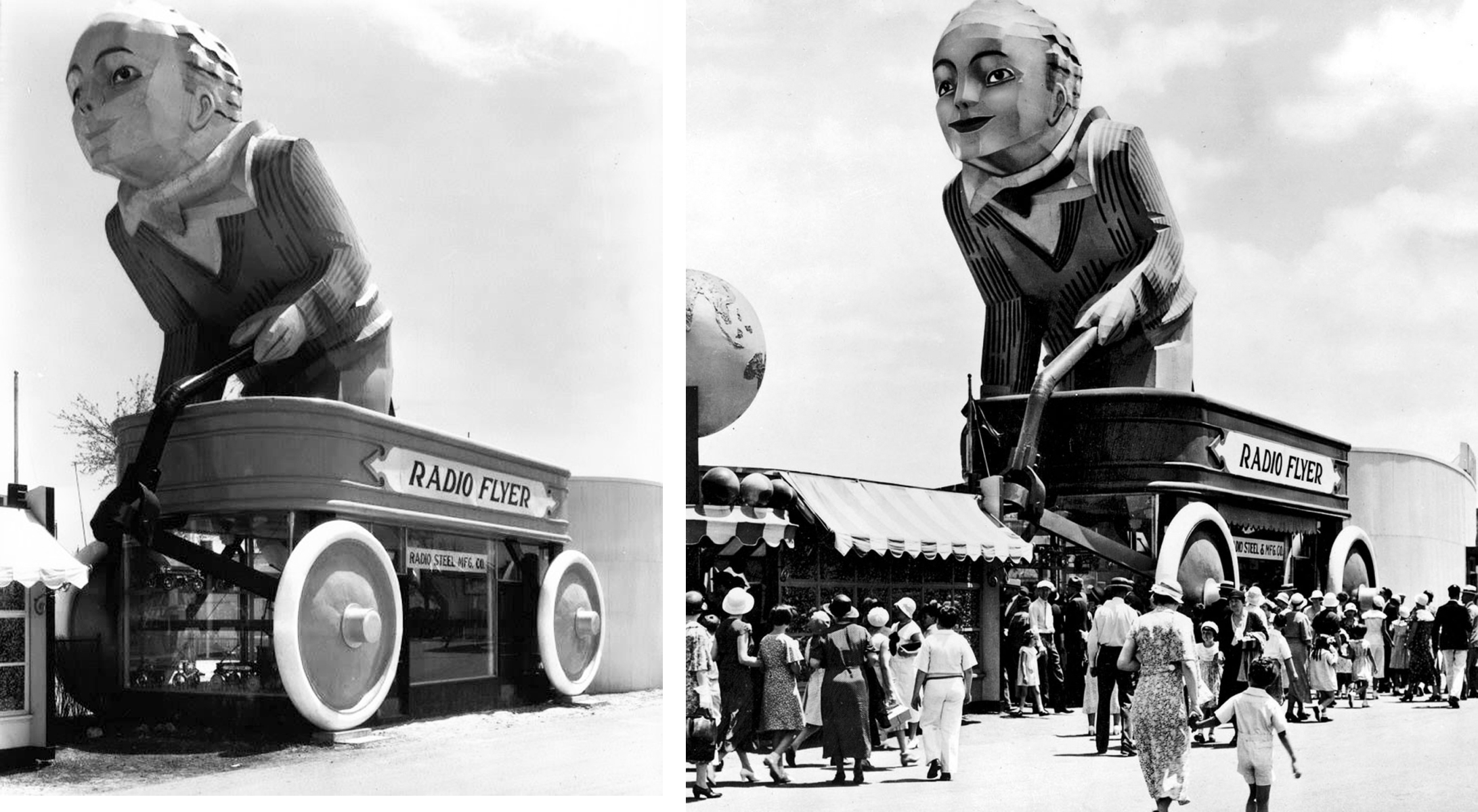 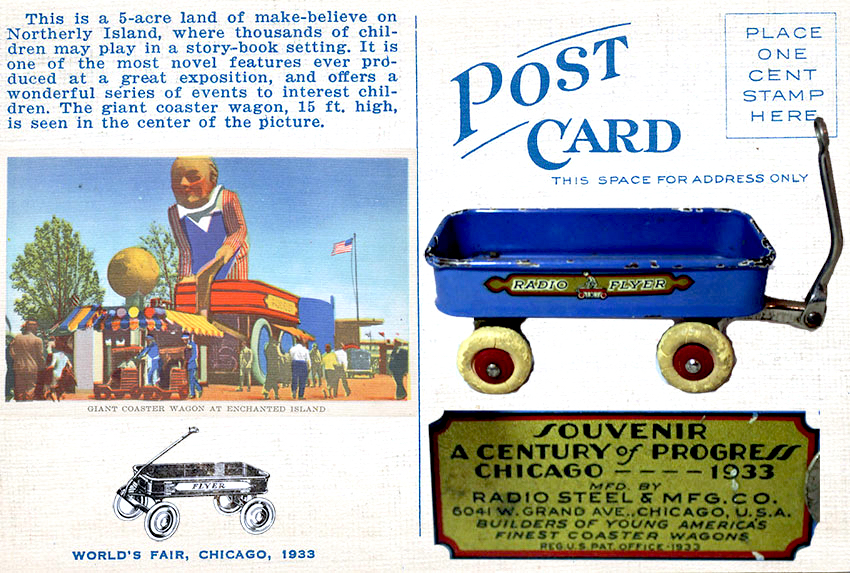 Postcard depicting the 25 cent miniature wagon being sold at the Radio Flyer exhibit.

Patent for the Streak-O-Lite Model (designed to be similar to the Zephyr trains).
Launched at the 1933 A Century of Progress