Fort Dearborn Replica
Go south beyond the Midway, and near Twenty-sixth street step within a log stockade that stands to the left of the roadway. Before you pass within, look back and scan the Chicago skyline with its towering skyscrapers; drink deep of the scene about you that voices a century of progress.

For the next moment you are to be carried back a hundred years and more, back to a day when Chicago’s few settlers huddled close to Old Fort Dearborn, and the fort housed soldiers to protect them, and to hold the line of advancing civilization against the northwestern tribes. Here is contrast almost breathtaking a century spanned with a few short steps, and with little need for imaginative aid.

This is Old Fort Dearborn as it actually was, faithfully reproduced in every detail, constructed even as toiling men built the first Fort Dearborn in 1803. The original, when completed, stood near where Michigan Avenue crosses the Chicago River.

And along this same Michigan Avenue, on a day in August, 1812, while war with Great Britain was raging, men and women marched from the fort and were massacred by the Indians; only a few survived that terrible day. 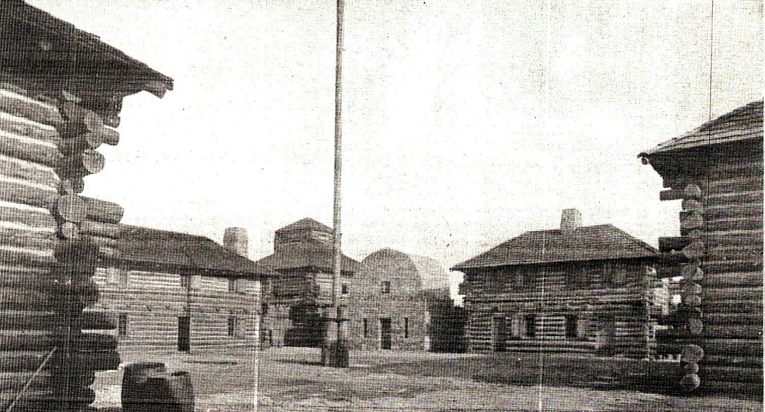 As you enter the massive log gate leading into the stockaded inclosure you see a quadrangular parade ground, in the center of which is the 70-foot flagpole. The flag that flies from it carries, you will note, fifteen stars for the states of 1812.

Guards are dressed in the blue and white uniforms of the era. Double rows of log palisades, ten feet and five feet in height, are so arranged as to permit the fort’s blockhouses to command the terrain outside, and the inner space between the palisades.

On the northeast corner is a blockhouse, and one on the southwest corner. Along the walls are narrow slits, through which, in the original fort, soldiers trained their guns.

Here are the soldiers’ quarters, and across from them those of the officers. On the east side are the commanding officer’s quarters, next to them the supplies building, then the powder magazine.

You may spend hours looking at maps, and records, and relics.

Photostatic copies of the old fort, other historical documents and records, and books of the period, decorate the walls. There is a facsimile of a treaty between the United States and the Sac and Fox tribes, in 1832, by which the government paid the Indians 3 cents an acre for the land of northern Illinois. An old four-poster bed, brought from England 115 years ago, a corner cupboard more than a hundred years old, pewter dishes brought from England 124 years ago, tools and firearms, and an old oxen yoke and a quaint wooden meat grinder 125 years old. On the table a sample ration for a day of the soldier of the time is laid out a pound of flour, a pound of meat, vinegar, a half gill of whisky, salt, and a piece of soap. 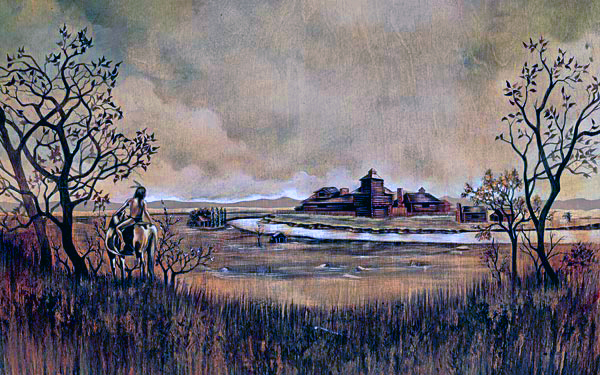 In a corner of the enclosure is an open fireplace, over which hangs a huge iron pot, and perhaps you can picture the fire glowing on winter nights, and women of the fort making soap for the garrison. In the rooms are other fire places, with andirons, long handled frying pans, huge kettles and spits for roasting fowls. Warming pans that made beds comfortable on cold nights, and trundle beds for the children, which conveniently slid under the larger beds in the daytime ; a churn of maple with wooden hoops, and a dough tray; are all shown. The fort’s store is reproduced with jerked beef, skins and knives, calico cloth and corn meal, ready for sale.

Two brass cannons that were brought to the original fort in 1804 and two others made in Paris, peer menacingly out of the blockhouses. They were loaned to the Exposition by the United States Military Academy at West Point. Daughters of the American Revolution, The American Legion, The Chicago Historical Society, The Smithsonian Institution, and the U. S. Army and Navy all contributed generously to this display.