Erie, Pa., the smallest town represented by a team in yesterday’s games in the national bowling tournament, carried away the big end of the honors of the day. Until late at night the Belleville, Ill., team, which really is considered a St. Louis organization, led in the five-men team contest, which was the event of the opening day, but at the midnight hour Mr. Baumeister of Erie rounded up his score of 192, and this sent Erie’s total for the three games up to 2,678, which was just eighteen better than the men who came from the Illinois suburb of St. Louis.

Eighteen teams took part in yesterday’s competion and twenty-four teams remain to play in the same event today, so that Erie is far from having won the coveted prize.

Theb opening day of the first national bowling tournament ever held was a roaring success in every way except in the dimensions of the broom in which it was held. These were entirely inadequate for the occasion. The bIllinois Bowling association, under whose auspices the tournament is given, has provided a nice, clean, well lighted room, good seats, and six beautiful new alleys in the Welsbach Building, at Wabash avenue and Randolph street, but there was no space enough to accommodate the bowlers, their friends, and the crowds that gathered to watch them.

One thing was settled as soon as the first games in the afternoon got under way. That was that there was interest in bowling. The noise made by the crowd of spectators would put a bleacher delegation at a baseball game toi shame. There was almost a continual roar of applause from the beginning of the play at 3:30 p.m. until the close of the day’s sport at midnight.

Eight Chicago Teams Fail.
Chicago teams did far better than New York’s. but the showing made by the locals was, on the whole, disappointing. Eight of the eighteen teams rolling yesterday were Chicago teams, yet the best Chicago was able to do was to place a team in fifth place. The Chicago teams which rolled were the Stars, Webers, Americas, Lakesides, West Chicagos, Ansons, Oaklands, and Kleinbauers. Of these the Ansons made the best showing.

All in all, the work of the first day failed to develop anything sensational, unless it was the victory of the Erie team. The experts, naturally, were bothered more or less by the new alleys, and no phenomenal averages were recorded. The best individual average of the day was made by Captain Belmar of the Rosedale team, New York, although this team’s record was far down in the list. It is predicted that all of the records of yesterday will fall today.

Opening Teams at a Disadvantage.
The teams which played first were at a considerable disadvantage, as both pins and alleys were brand-new, and it is always more difficult to bowl well under such conditions. As the games advanced this handicap wore off in a measure, but it is fair to assume that the six clubs which opened the tournament at 3:30 p.m. were handicapped in a degree as against their luckier opponents who drew a later period for their contests.

The opening teams were the All Stars of Louisville, the Cyclones of New York, the Webers of Chicago, the Stars of Detroit, the Marions of Indianapolis, and the Stars of Chicago. Before they got down to work there was a formal “opening” of the tournament. In this ceremony Dr. H. Timm of New York, the president of the American Bowling congress, rolled a ball down alley No. 1, while G. Langhenry of Chicago, the President of the Illinois Bowling association; W.V. Thompson, Samuel Karpf, and Frank Brill and Tom Curtis were performing a similar feat on the remaining five alleys. Brill, acting as the substitute for Treasurer G.P. Strack of the national organization. None of these men succeeded in scoring a “strike.” Secretary Karpf coming nearest with nine pins. President Timm upset but one pin.

This formality over with, the six competing teams got down to work at once. The Louisville and New York (Cyclones) men rolled on alleys 1 and 2, while the Webers and Detroits alternated on alleys 3 and 4, leaving the Stars of Chicago and the Indianapolis team to battle on alleys 5 and 6. 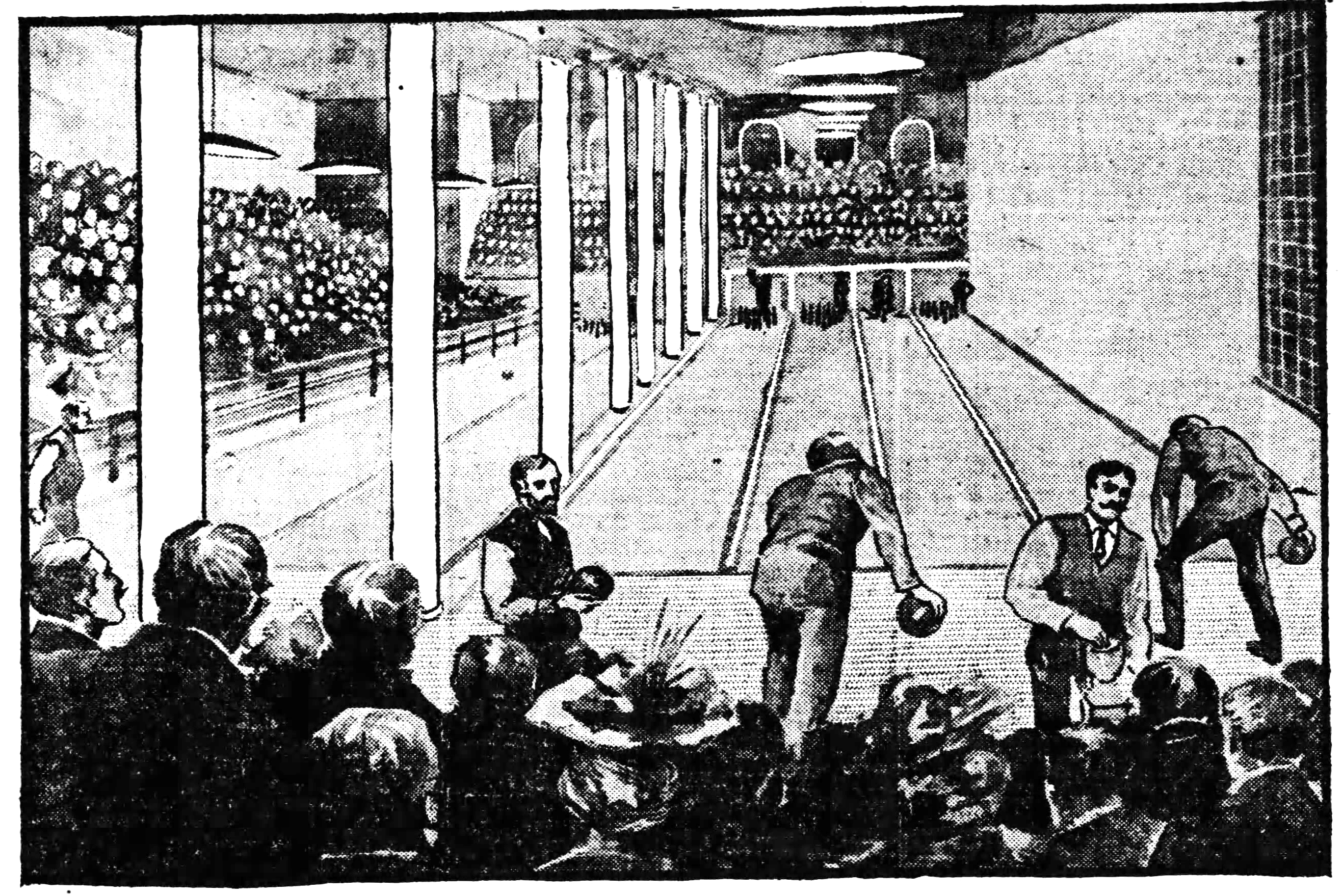 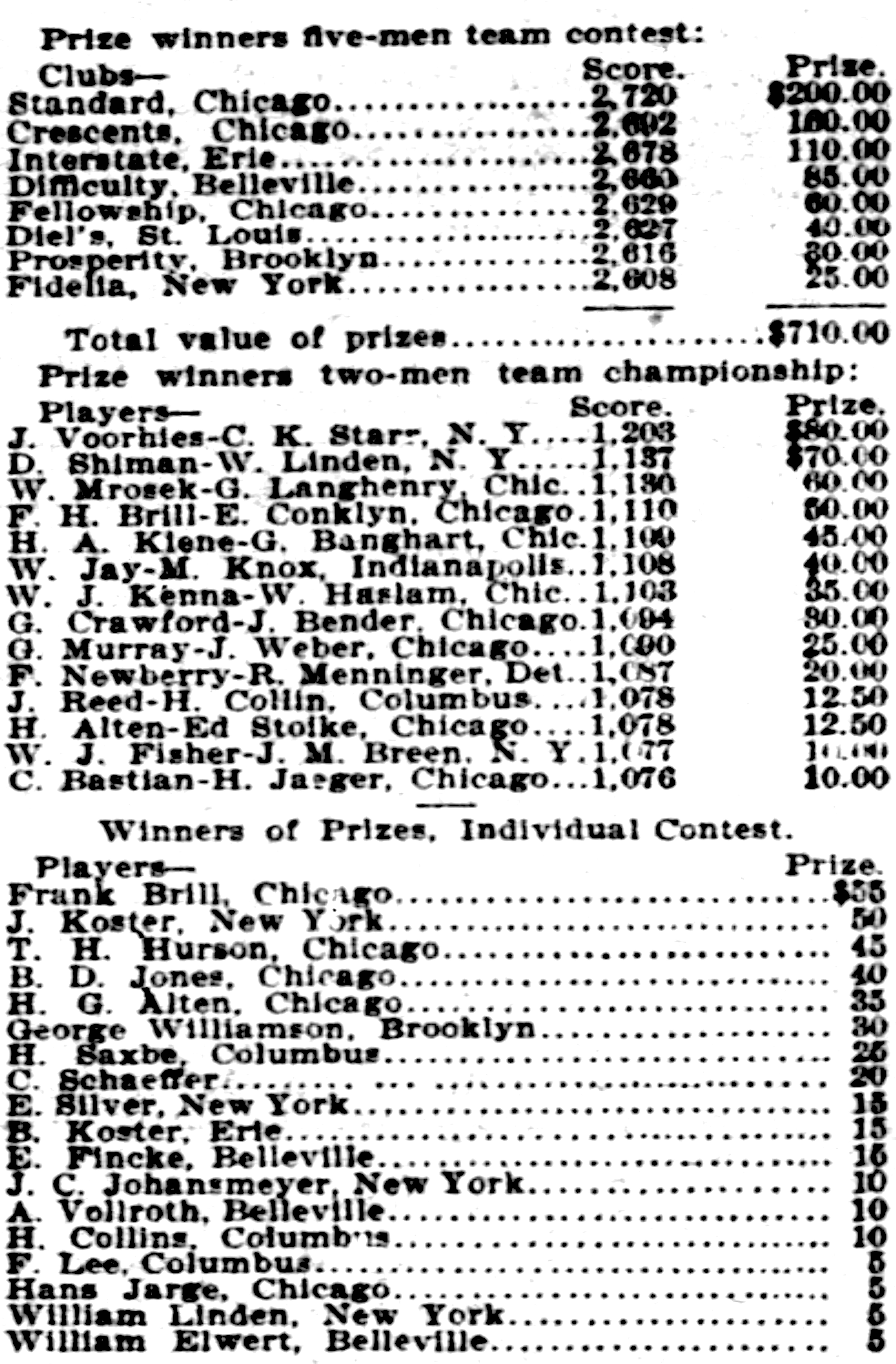 Sixty of the two hundred or more bowlers who participated in the first national bowling tournament in this city last week took part in all three of the national championships. The Tribune presents the complete records of these sixty men and most important, which will be highly gratifying to Chicago rollers, is the fact that Frank Brill, the Chicagoan who won the individual championship, is the leader of in the grand average for the national tournament. Despite his comparatively poor showing in the first contest—the five-men team championship—in which totaled less than 500 pins in three games, Brill eventually surpassed all others in the total number of pins scored during the tournament.

Following Brill came two New-Yorkers—Koster and Voohies/ Koster figured in none of the first prizes, but rolled steadily well. Voorhies is one of the two-men champion teams. W.J. Kenna of Chicago is fourth in the grand averages. He is a member of the West Chicago team. Menninger, the noted Detroit player, came in fifth, and then follow two more Chicago players.

For some reason none of the Standard team of Chicago, which won the five-men team championship, took part in the individual championships. Therefore, they do not figure in the table of grand averages. Many other players who made good records on two of the three championship events failed to take part in the third event, and are not included, therefore, in the grand averages.

The figures show some queer things. L.O. Voorhees totaled 560 in the five-men team contest, 499 in the two-men team contest, and 550 in the individual contest, bringing his total forb the tournament to just 1,600 even. Oscar Hammer of Brooklyn made almost the same score in each of the three championship events. Johansmeyer of New York bowled less than 400 in the five-men team championship, and then went a fast clip in the next two series.

Below is a complete record of all the men who took part in all the championships. 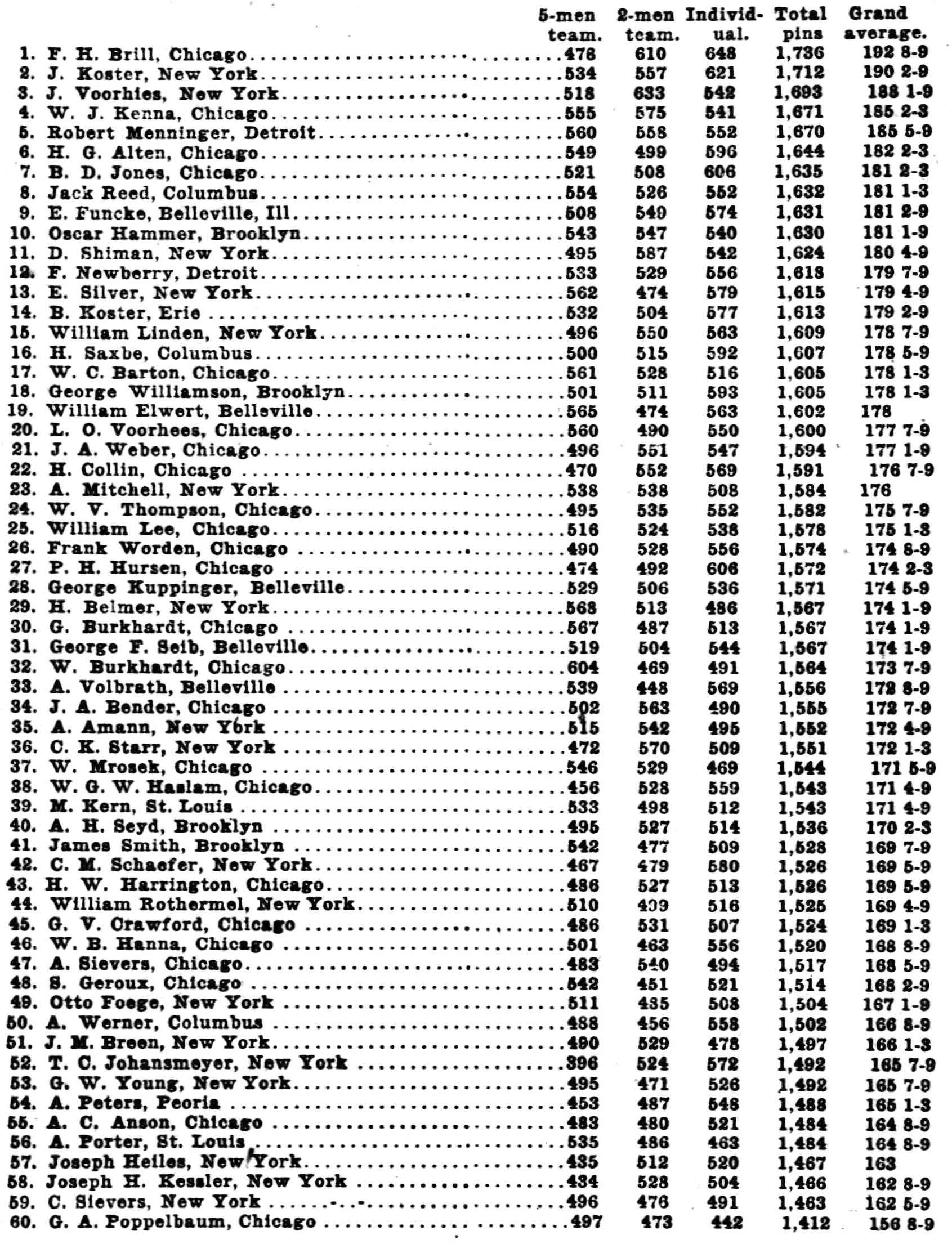 END OF FIVE-WOMEN TEAM CONTEST.
Crescents Take Third Place with a Total of 1,698.

The Crescent Bowling club won third place in the five-women team contest of the women’s national bowling tournament by rolling up a total of 1,698 yesterday afternoon. This concluded the five-women team competition and left the Double Century bowlers in the lead with their total of 1,876, and the Moderns in second place with 1,728 pins to their credit. The bowling of the Crescents was remarkably even, their totals of their three games being 559, 592, and 547. Mrs. A. Fuellgraff and Miss Agnes Fueligraff made the highest individual scores, 128 each, and both in the second string. Miss Fuellgraff’s average for three games was the better, however.

The contest for teams composed of three women was started yesterday and furnished one of the most exciting and closely rolled matches of the tournament—that between the “Center” team,” composed of Mesdames Schramm, Mueller, and Cook, and the “Three Turkeys,” which was the name adopted by Mesdames Stebens, and Wachsmuth and Miss Jeschke. The latter trio was looked upon as an almost sure winner, and it was something in the nature of a surprise, therefore, when the “Center” team won out in the last frames by a margin of only twelve pins. The “Centers” were ahead at the end of the first game, but that lead was wiped out by the “Turkeys” in the second game and they a margin of fourteen at its conclusion. The final game was exciting throughout, and by steady bowling the Centers, each of them beating out her individual opponent by a few pins, totaled 422 for the game to the “Turkeys'” 396. 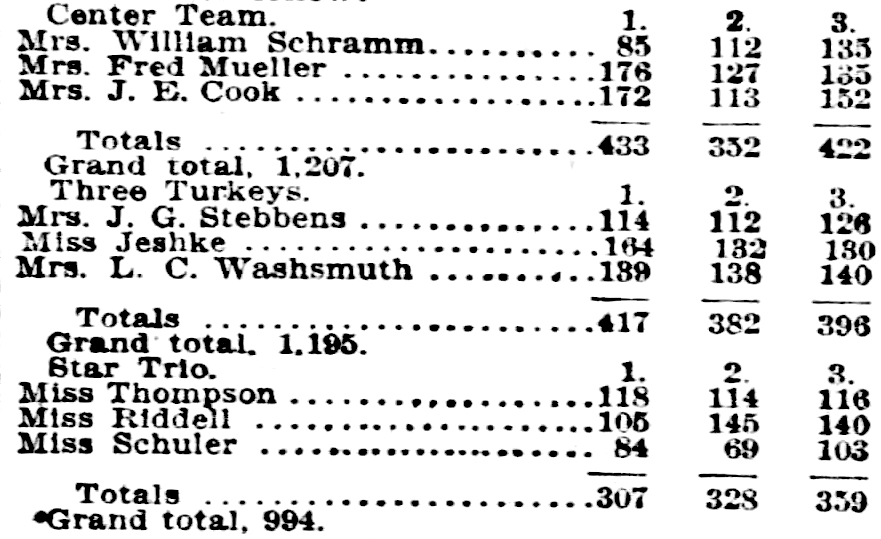 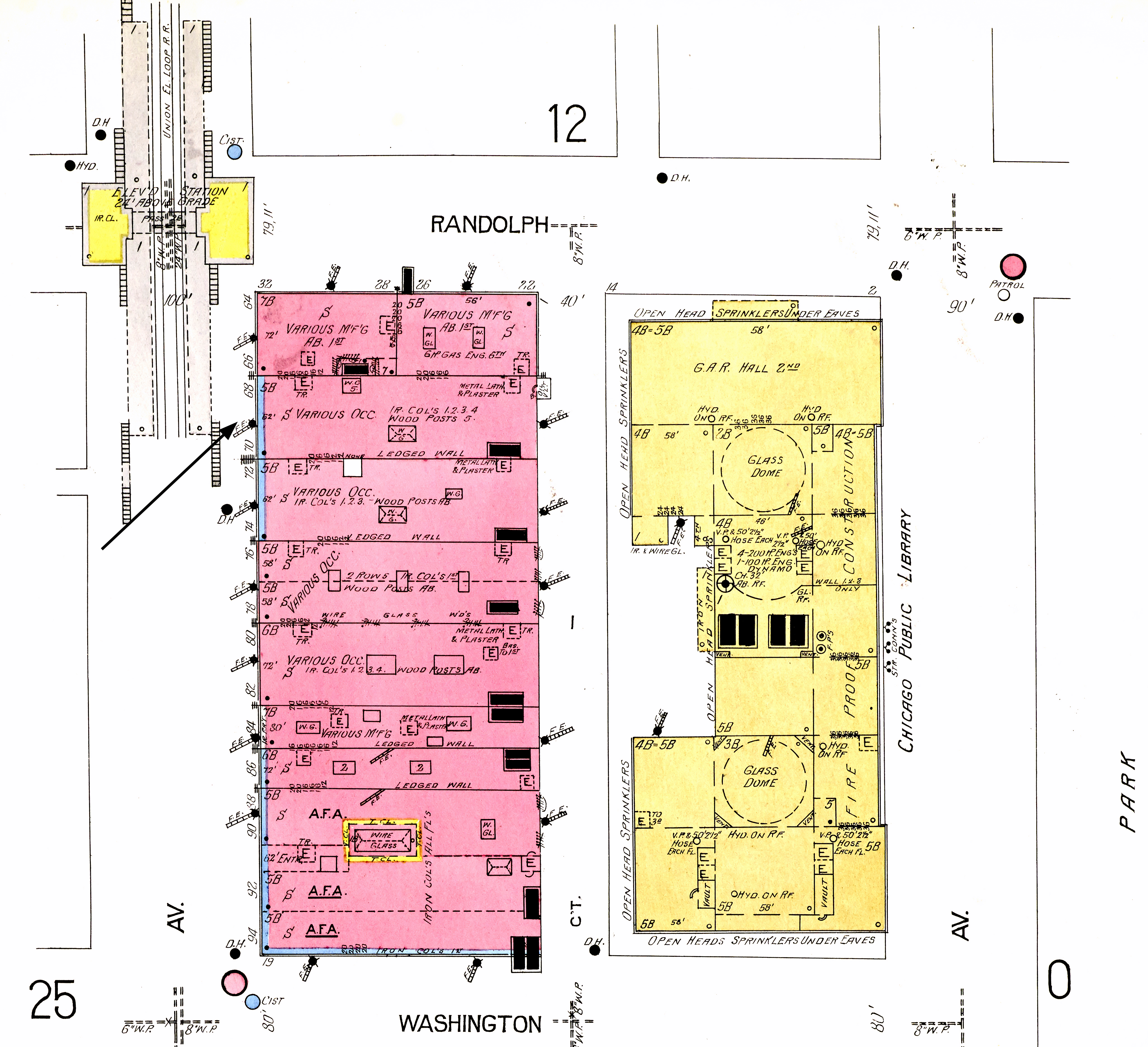