The cherished idea of the last generation of newspaper men that one must of necessity go from paper to paper over a period of years before he is a really seasoned news man is most beautifully exploded in the example of Richard J. Finnegan, managing editor of the Chicago Daily Journal. “Dick” Finnegan, as all the mid-western profession knows him best, is a one-job man. For years past he has filled that job completely. 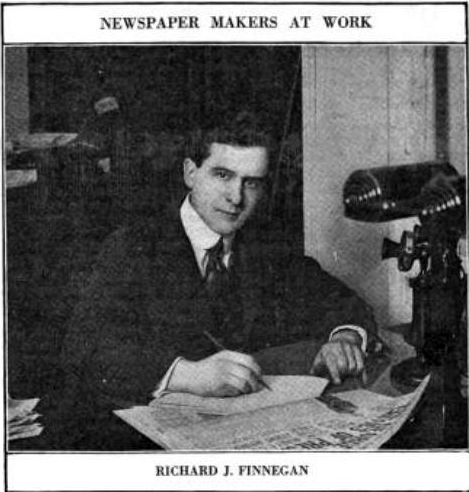 His boyhood ambition was to be a good newspaperman, and he set about attaining it in thorough fashion. While still a youngster in school, he his vacations working as office boy for the old Chicago Chronicle. There he learned that the library is the most important part of any newspaper office and he studied its utilization through three summer holidays. He handled a newspaper delivery route in the early mornings through the year, attended the old West Division high school until 2:30 in the afternoon, and then reported at the Chronicle office for work. Frank Rowley was then the managing editor of the paper. Lacking any sizable volume of advertising, the Chronicle sought to fill much of its space with letters from subscribers and the handling of these became one of Mr. Finnegan’s main duties.

Finally, on vacation time, he was given to write space copy. The afternoon of the terrible Iroquois Theatre fire, he happened to be the only reporter in the local room of the Chicago Chronicle. That was his grand chance for distinction and he seized it. He managed to penetrate to the frightful top gallery of the theatre and the story he wrote of what he saw earned him a permanent place on the paper’s staff.

Later he transferred to the old Chicago Inter-Ocean and served as a reporter for two years. It was at this time that he began to study law nights, and in order to do this he again shifted to the reportorial staff of the Chicago Daily Journal, which, as an afternoon paper, left his evenings free. He has remained with the Journal ever since, covering general assignments, labor and city hall run as a news man; rising to automobile editor; then being sent to cover state legislative sessions as Springfield correspondent.

It was while covering labor that Mr. Finnegan began the study of the convict labor system, especially as applied to road work in Colorado. This led to his appointment as chairman of the Good Roads Commission of the Chicago Motor Club, and while filling that office he called the first Good Roads state convention in Illinois, which drew an attendance of delegates from automobile clubs, civic chambers of commerce, women’s organizations and members of legislature. From this was evolved Illinois Highway Improvement Association, whose first secretary was Mr. Finnegan, and which today has resulted in the campaign for the $6,000,000 bond issue now assured.

Later Mr. Finnegan was appointed a member of the Dixie Highway Commission by Governor Dunn, and reappointed by Governor Lowden. He was Democratic candidate for Congress from the 10th congressional district in 1910; was appointed a member of the Cook County Jury Commission by the judges of the county in 1911, serving two years. He became city editor of the Chicago Journal in 1914, and managing editor two years later.

Mr. Finnegan’s birthplace was less than five blocks distant from his present offices in the Journal building. He is married and has three children; likes to work at his desk right out in the local room where he is surrounded by his “boys”; is an active member of both the Iroquois and the Chicago Motor clubs.