Born in 1868, Caroline McIlvaine embarked on a library career in 1891, when she and her sister Mabel took jobs at the Newberry Library. She worked in all departments at the library. After five years, she was appointed head cataloger and the director of a genealogy index. 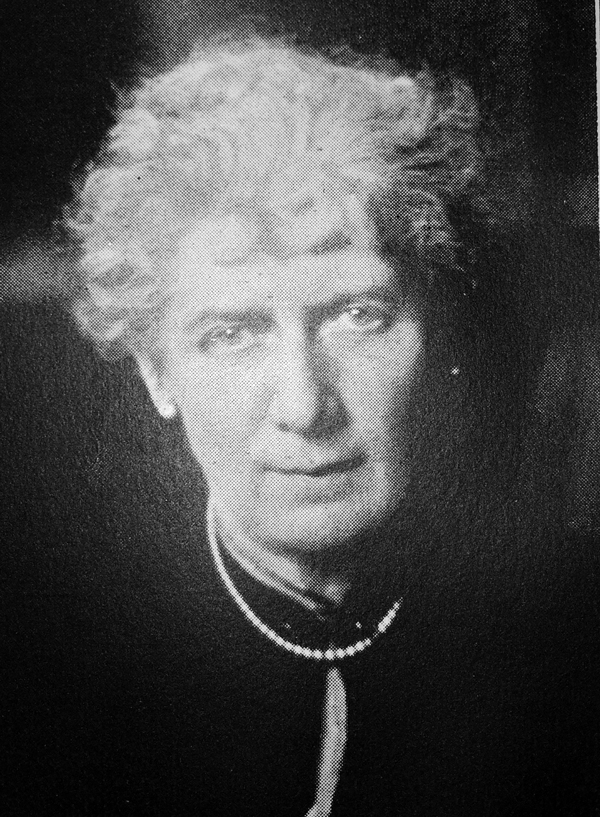 In 1901, she left the Newberry for the Chicago Historical Society (CHS) and a job with more responsibility. She became librarian, classifying and cataloging. Although she was supposed to work under the secretary’s direction, between 1906 and 1921, she herself was acting secretary, responsible for the building and the collections. In practice, she did the work of director of the CHS. She handled all areas of operations, contacting donors, managing the maintenance workers, handling acquisitions and publications, and promoting the museum to the public.

She began the practice of field trips to historic places in the state as part of educational programs. She obtained important documents — maps, manuscripts, correspondence — about the history of Chicago and the state. Her most important achievement as a curator was the acquisition of the collection of Charles F. Gunther and the subsequent steps she took to manage the collection. Gunther was a candy manufacturer, a trustee of the Chicago Historical Society, and a friend of Caroline McIlvaine’s family. After his death in 1920, Gunther’s family offered his varied collection of foreign antiquities and Americana to the CHS for $150,000. McIlvaine realized that the purchase of this collection would make the Chicago Historical Society a major American historical museum.

She bought the collection and then had to take steps to raise the money. She combined this goal with a desire to bring women into the society in an active way. McIlvaine organized a Women’s Auxiliary of CHS that would raise the money to buy the Gunther antiquities. She also sold foreign portions of the collection at a New York auction to receive needed funds and to help define the scope of the CHS collection.

McIlvaine realized that the CHS needed press coverage to let people know about the society and to bring in new members. She therefore became active in civic decisions related to historic sites. She was involved with the Chicago Plan Commission to determine Chicago historic places that should have markers and worked for the preservation of the Water Tower and other historic buildings. 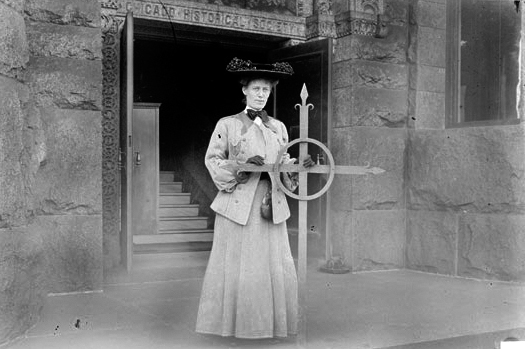 Caroline McIlvaine standing with a Cahokian Cross in front of the Chicago Historical Society building in 1904.

In managing the museum, she developed new approaches in programming. McIlvaine saw the value of radio in bringing information to large audiences, and she gave broadcasts on WMAQ about both Chicago history and the services of the CHS.

The museum became an educational institution under McIlvaine’s direction. With large numbers of immigrants in the Chicago population, she saw the collections as a means to popular education for both immigrants and native-born Americans. Her educational agenda included programs for children. For example, school children came to the museum on Saturdays for interesting additions to textbook studies. She believed that the children of immigrants would assist their parents in Americanization by bringing home the museum’s lessons in history. McIlvaine set up a Junior Auxiliary in 1925 for the children of CHS members.

Outside the Chicago Historical Society, she became a leader in a newly developing profession of museum managers. At a time when few women were members of museum staffs, she set standards of professionalism in exhibiting history and in developing collection policies. As the history editor of the journal, Museum Watch, she reported to a national readership on CHS programs as well as developments in other museums.

During the 1920s, her focus on education in museum programming apparently did not receive the support of the Executive Committee of trustees. In 1926 she resigned, citing unsatisfactory salary and working conditions. She explained that she had been working ten hours a day and had not received a salary increase that had been due to her two years earlier. The Executive Committee members, in accepting her resignation, awarded her a $2500 stipend to show their esteem for her service for 25 years.

For the rest of her life, she continued to promote Chicago history as a writer and lecturer. She did a series of radio presentations on notable Chicagoans, directed to primary school children. She became historical adviser to the writers of Chicago and Its Makers: A narrative of events from the day of the first white man to the inception of the Second World’s Fair, Paul Gilbert and Charles Lee Bryson. The contents of the 1929 publication came from McIlvaine.

During her leadership of the Chicago Historical Society, McIlvaine changed the collection policy and the role of the institution, developing education programs for the public. This focus on education has continued and has remained an important approach to the collections to the present.

This article was written by Adele Hast, The Caxton Club.