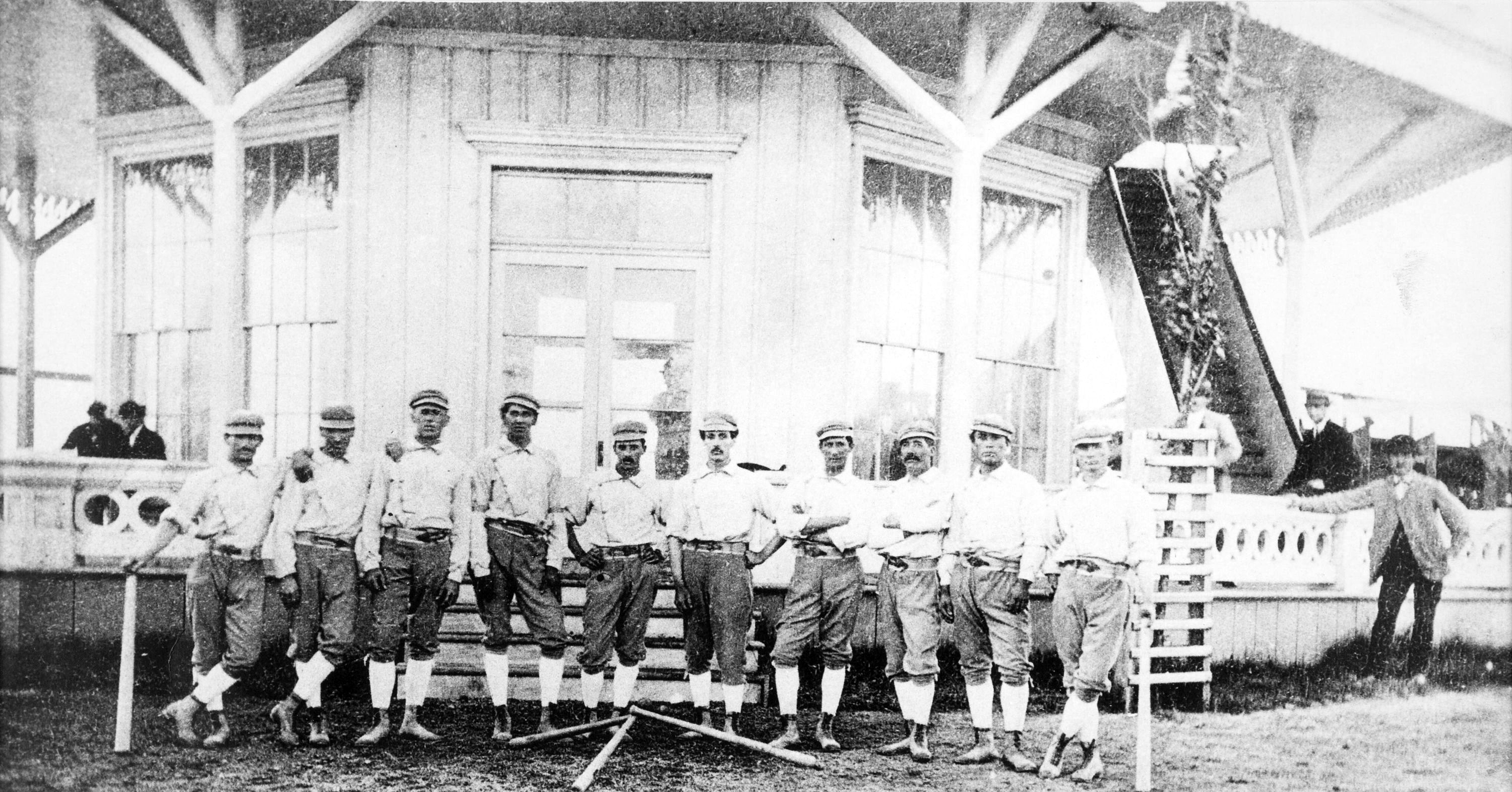 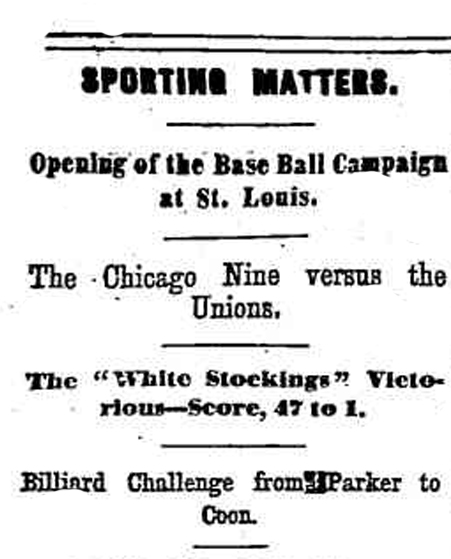 Special Dispatch to The Chicago Tribune
BASE BALL.

THE CHICAGO NINE VS. THE UNIONS OF ST. LOIUS
St. Louis, April 29.—The Chicago Base Ball Club inaugurated the match game season of 1870, by a contest with the Unions, of St. Louis, and achieved one of the greatest victories on record.

ARRIVAL AT ST. LOUIS.
The Chicago Nine reached this city at 11 o’clock this afternoon, after a safe and comfortable journey over the Illinois Central, being supplied with quarters in the sleeping car, an proceeded to the Laciede Hotel, where they were allotted spacious and nicely furnished rooms, the same suite as that occupied by the Red Stockings on the occasion of their visit here last season.

TO THE FIELD.
Dinner over, the club entered carriages supplied by the Unions, and were driven to the base ball park, about four miles northwest of the city, where both clubs were soon on hand in readiness for work.

UNIFORM OF THE CHICAGO NINE.
The Chicago nine were clad in their new uniform, which they had donned for the first time, and an elegant one it is. It consists of a blue cap adorned with a white star in the centre, white flannel shirt, trimmed with blue and bearing the letter C upon the breast worked in blue. Pants of bright blue flannel, with white cord, and supported by a belt of blue and white British thread, shoes of white goatskin, with the customary spikes., the ensemble constituting by far the showiest and handsomest ever started by a base ball club. Already the snowy purity of the hose has suggested the name of “White Stockings” for the nine, and it is likely to become as generally accepted, not to say as famous, as that of the sanguinary extremities.

THE ST. LOUIS CLUN.
The Union Club, which is composed entirely of the best class of St. Louis young men, also sported their new outfit for the first time, the same being made up of white cap, shirt, and pants, and blue stockings.

THE ATTENDANCE.
About one hundred people were present, and the day was as bright and warm and beautiful as could have been prayed for.

THE GROUNDS
were not in the best of condition, owing to the extreme length of the grass, which materially altered the calculations of the Chicago players in stopping ground balls. A vast deal of interest was taken in the game by the St. Louis people, who were curious to see whether the Chicago Club would administer a beating to the Unions as did the Red Stockings in 1869, when the score was 70 to 9—the prevailing opinion being that would not be done.

COMPETITION OF THE ST. LOUIS NINE.
The Union nine is considered materially stronger than that of last year, being now constituted as follows:

They certainly proved themselves a strong nine in the field and on the bases—stronger than any of the amateur organizations—but did not develop a corresponding skill at the bat.

The Chicago Club was positioned in the regular way, McAtee playing at firs, although yet troubled by his leg, and Flynn served as a substitute, the first game, by the way, which he ever witnessed as a spectator, played by a club with which he was connected. 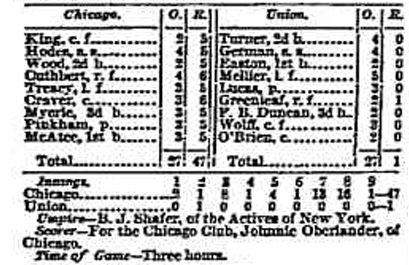 The game was called at 3½ o’clock, B. J. Shafer, of the Actives of New York, being selected as umpire, and proving most efficient, watchful, fair, and prompt in that position.

After the third inning, the remainder of the game hardly calls for a detailed description, the Unions suffering a whitewash in each if the subsequent innings, and scoring but 1 run in the game, while Chicago secured 47.

THE PLAY OF THE WHITE STOCKINGS.
On the oart of the Chicago nine, it would be difficult to discriminate where all did so well, the very few errors which were made being mainly attributable to the long grass. The batting was terrific, long, and safe. Craver distinguished himself by several magnificent foul flies; Tracey by a fine running catch, and Meyrle out of the same sort. That the others did not come in for a share of the honors was due to the inferior batting of the Unions. Tracey led the batting score, made seven first base hits, and nine total bases on hits. 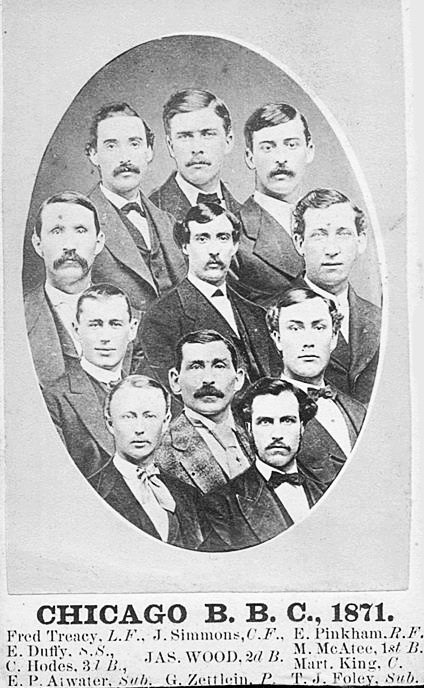 The Chicago Base-Ball Club was originally formed in 1870, following the success of the 1869 Cincinnati Red Stockings, baseball’s first all-professional team. Their first game was played on April 29, 1870. The Chicago White Stockings were close contenders all summer, but disaster struck in October 1871 with the Great Chicago Fire, which destroyed the club’s ballpark, uniforms, and other possessions. The club completed its schedule with borrowed uniforms, finishing second in the National Association, just 2 games behind, but it was compelled to drop out of the league during the city’s recovery period until being revived in 1874.

The team changed its nickname to the Colts in 1890. The Chicago Colts hold the major league record for most runs scored in a game on 29 June 1897 when they beat the Louisville Colonels 36-7. Cap Anson left the team in 1898 and his departure was so impactful that the Colts looked like Orphans by the Chicago newspapers and the name stuck till 1902.

On March 27 of that year, the team was so full of young players that the Chicago Daily News penned,

(manager) Frank Selee will devote his strongest efforts on the team work of the new Cubs this year.

The team has generally been called Selee’s Colts, and in the next few years, the word “Cubs” was gaining popularity. In August 1905, Selee resigned and was replaced by Frank Chance. Selee preferred Colts to Cubs, but Chance liked Cubs and his endorsement was embraced. 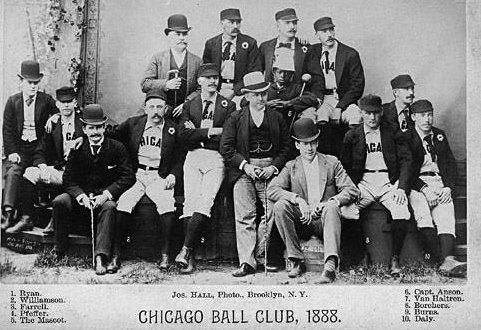 The Club played their first season at Union Base-ball Grounds which was visibly located at Michigan and Randolph streets. The Chicago Fire destroyed the park and until 1877, the games were played near the corner of State and Twenty-third streets. On 6 November 1877, the Club was granted, by the City Council (vote ayes 26, nays 3) a lease of a portion of the Lake Front lying between Washington and Randolph streets, the which was occupied by a base-ball park until the close of the season of 1884. In 1885, new grounds were procured near the corner of Congress and Loomis streets. This park, known as West Side Park, held 10,000 fans, also had a bicycle track which encircled the playing field. In 1893 a second West Side Park was built on the larger block of Taylor and Wood streets. This park became known as the West Side “Grounds”. West Side Grounds Park was the home of the Cubs till they occupied Weegham Park (now Wrigley Field) in 1916. 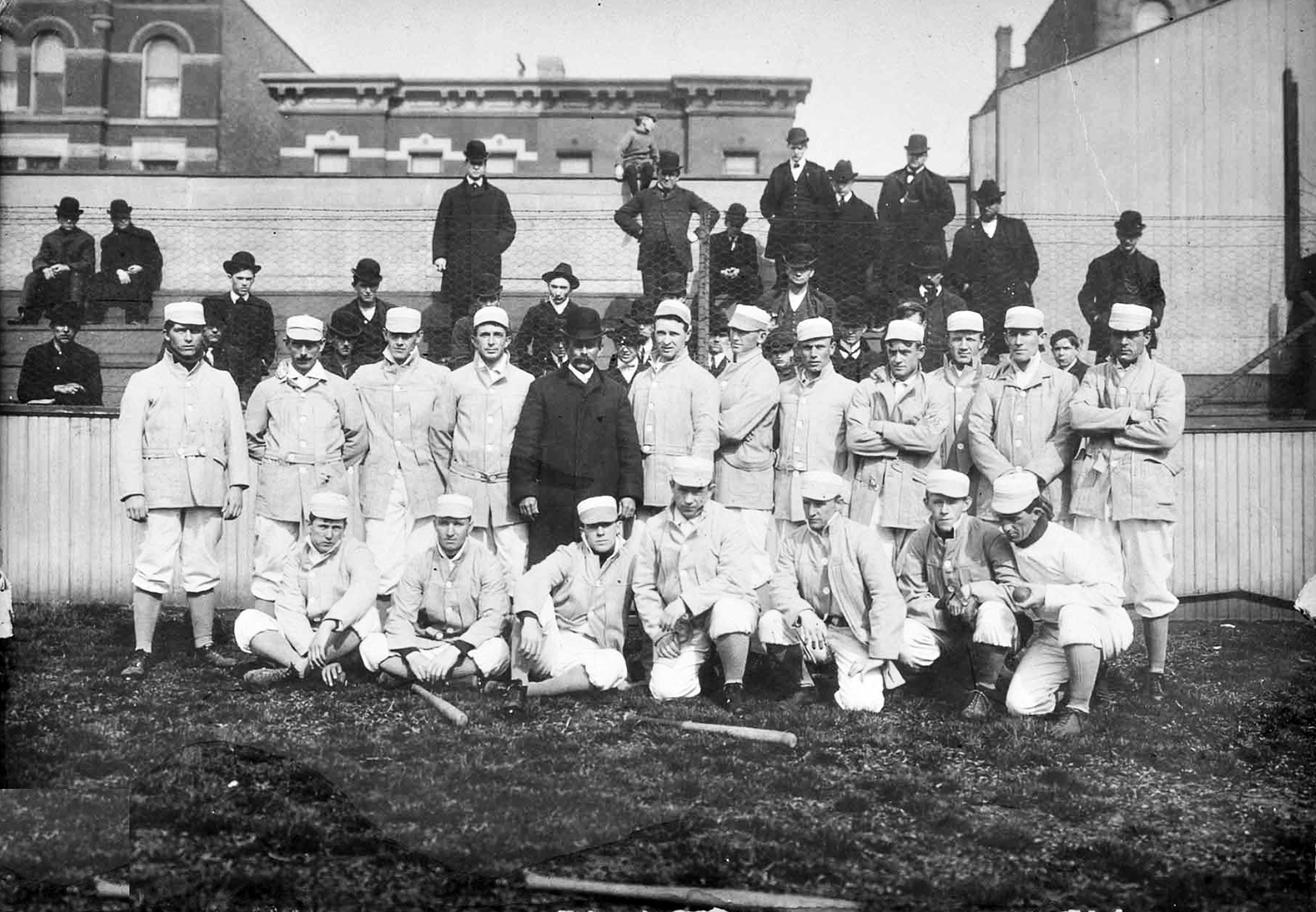 Chicago Cubs, 1903
Bobby Lowe (standing, second from the left) and Jake Weimer (standing, first on the right). Lowe and Weimer played together with the Cubs only in 1903. 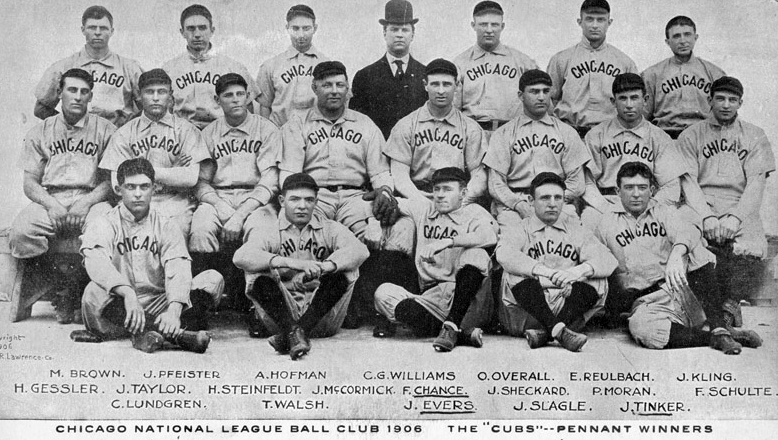 The Chicago Cubs’ first ten years included the famous double play combination of Tinker to Evers to Chance. After turning a critical double play against the New York Giants in a July, 1910 game, the trio was immortalized in Franklin P. Adams’ poem, which was first published as That Double Play Again in the New York Evening Mail on July 12, 1910. The Chicago Daily Tribune reprinted it as Gotham’s Woe on July 15, 1910. Three days later, on July 18, the New York Evening Mail republished it under the title by which it is best known today, Baseball’s Sad Lexicon.

At that time, the Giants and the Cubs were two of the league’s strongest teams. “Gonfalon” is a poetic way of referring to the league championship pennant that both clubs were symbolically fighting for. The expression “Tinker to Evers to Chance” is still used today, and means a well-oiled routine or a “sure thing”.

On the poem’s 100th anniversary, Tim Wiles, director of research at the Baseball Hall of Fame revealed a recent discovery. The poem was part of series of poems published in the New York Evening Mail and the Chicago Tribune. During the research process, combing the archives in the New York Public Library and the Center for Research Libraries, they have uncovered 29 poems, 15 of which detail a specific play or game that had occurred during the 1910 season, with “Baseball’s Sad Lexicon” the first poem published.

The Cubs name was threatened to change again in 1913, Frank Chance’s teammate, Johnny Evers took over the team and the newspapers began calling the team the Trojans, after Evers’ home town, Troy, New York. However, Evers only lasted one season (a third place finish) and the name his leadership inspired went with him.

It is unlikely that the name Trojans would have survived in the modern era. Can you imagine the jokes? 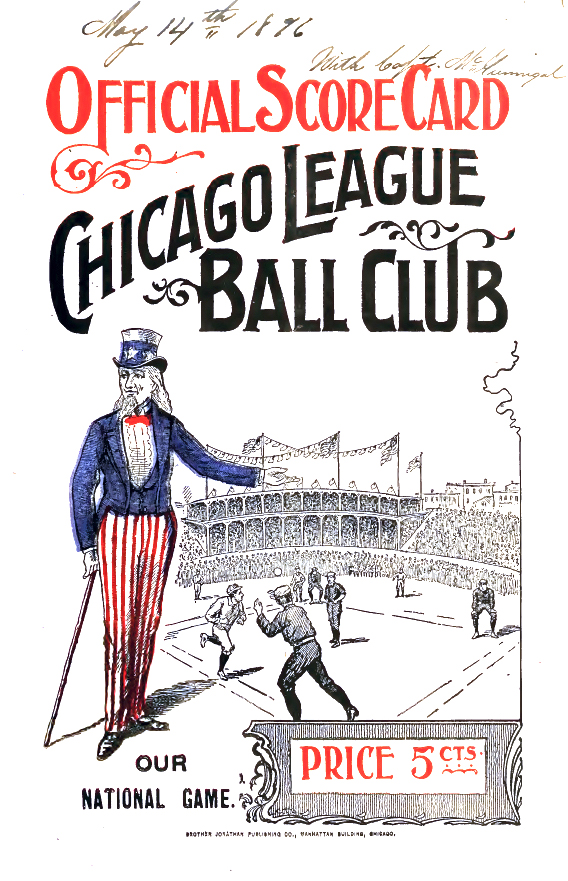 Cover of the Official Scorecard for the Thursday, May 14, 1896 Chicago Colts base-ball club.